Singaporeans Alex Chua Yi Zhao and Loh De Wei are only in their late 20s, but they're already bosses of a flourishing durian business.

The duo owns and runs Bao Jiak Durian, a stall located near the junction of Ang Mo Kio Avenues 3 and 6.

"We started this business out of passion," says Loh, 28, an engineer by training.

The pair, who spoke to Mothership at their stall recently, want to help customers who don't know "how to eat durian, how to choose durian, and where to get good durian".

"We ourselves have been [those customers]. We got conned and cheated into getting subpar durians," said Loh.

"I usually go to the market with my mum. Once, a durian seller told us [a particular durian] is Mao Shan Wang. But when we bought it back, we realised it was Red Prawn. It looked like Mao Shan Wang but it wasn't."

Loh and Chua first met each other online, in a Facebook group for durian lovers started by Loh.

Having bonded by their love for durian, Loh and Chua realised their shared negative experiences with durian sellers were far from unique.

"We asked around; most people's experiences with durian sellers are never positive," said Chua, 29, who does insurance work on the side.

Tired of finding themselves at the mercy of unscrupulous durian sellers, the duo decided to start their own business together in November last year.

"We chatted with each other, hit it off, then decided, let's do it,"said Chua.

Opening a durian business is a lot of hard work involving a lot of technical know-how like where to buy durians, how to cut durians, and the differences between durian types, for example.

Over the course of a month, both picked up their knowledge by talking to other durian enthusiasts, making trips to durian farms in Malaysia, and learning from other durian sellers.

For example, as he opened a new durian, Loh showed me a little black area inside it. "The season hasn't peaked so we see all kinds of problems, like these black seeds or slight unripeness."

He went on to explain that black seeds occur because the durian flowers dry up and shrink during the tree's flowering period. Eventually these dried flowers do not turn into fruit, instead appearing as little black seeds inside a durian.

Here's another fun factoid we learned from Chua: There are more than 200 varieties of durians just from Malaysia. Durian numbers like D1 and D24 are actually durian registration numbers from a durian registry in Malaysia. D1 is actually the first durian variety which was registered in Malaysia. Mao Shan Wang is D197 while Black Thorn is D200.

Both guys already seem to us extremely knowledgeable about the king of fruits, but they insist they are still learning on the job.

"Sometimes we drop the meat, sometimes we choose the wrong durian for customers," said Loh, who estimates that it will take them at least a few more durian seasons to be fully proficient durian sellers.

"Sometimes we see durians that we don't even know!" Chua chimed in.

Opening a durian business seems to be an unusual move for Chua who trained as an optometrist at Singapore Polytechnic because he thought the optometry field has "good money".

After graduation, Chua veered off that path and went into insurance.

"I thought that I could talk well, so that would equate to more sales, which it did initially — but became tiring after awhile because you had to constantly look for people," he said. "I didn't like that, so I went into durians!"

"My dad was like, why don't you just get a normal job in a bank," Chua said with a grin.

According to Chua, his parents originally saw his job as a step down, but have come round after business picked up.

Bao Jiak Durian's owners start work at noon every day and finish at midnight. Bear in mind, by the way, that this durian side business is on top of their respective other jobs. Usually, the first shipment of durians arrives at midnight, while a second batch arrives at between 5 and 6pm.

Both Loh and Chua cut more than 200kg of durians daily. Only two of them work on this — an arrangement that allows them to maintain the quality of the durians they offer.

"You must have the passion to chop durians for 12 hours straight," laughed Loh. "It's physically demanding!"

Hard work aside, Chua shared, quite candidly, that one of their peeves is unreasonable customers — whom they unfortunately encounter on an almost-daily basis.

"A lot of people think we have X-ray vision. They just tell you they want this particular durian and then you have to provide it. If you can't provide it, they will f**k you lor."

One customer even ordered a durian and finished the entire thing before saying he would not pay because it was not nice. Others indulge in haggling.

"When you go to cai png (economy rice) stall, you won't ask them to '扣一块' (give a $1 discount) right? But for fruits, people will ask you 'price adjust a bit leh'" said Chua. "It hurts our bottomline."

But none of these top the occasions where Loh and Chua have found themselves, rather frustratingly, on the receiving end of unjustified customer complaints. Loh shares:

"Durians are not always sweet, they're not always bitter. So if we tell them a durian is bitter, it might be bitter but not to the extent that they like, they will come back and say, 'this is not what I want' then they will want a refund."

Praised for being honest and knowledgeable

Bao Jiak Durian has its supporters.

When we met them at 5pm on a weekday, their shop was filled with packs of durians, but they were all already spoken for. Even as we were speaking to Loh and Chua, both had to turn away customers who came to patronise them.

Bao Jiak Durian's popularity can also be seen from the reviews on its Facebook page. There are a couple of negative reviews here and there, but most of the feedback praised Loh and Chua's knowledge and honesty: 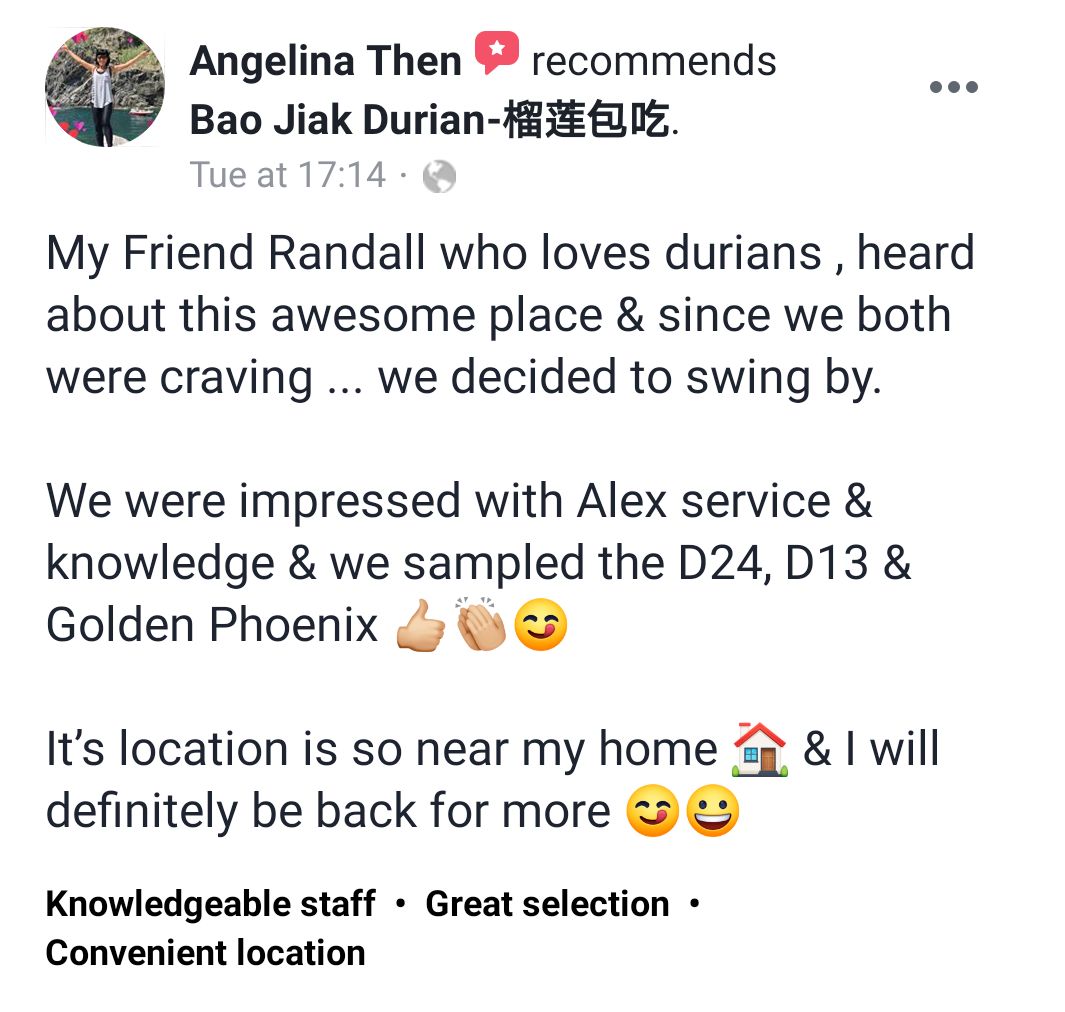 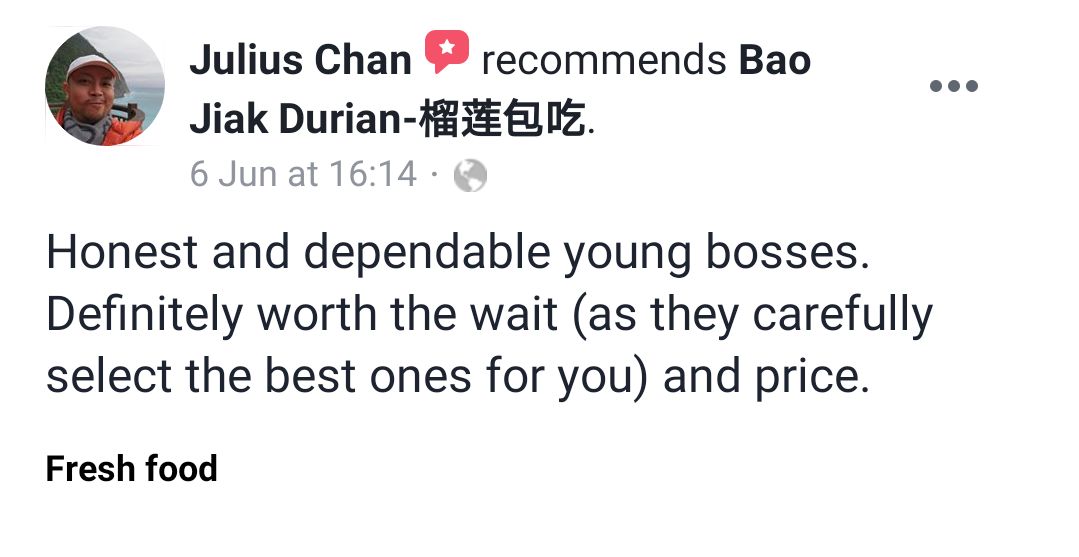 Playing to their strengths

"When we are really honest with people, they will return. So the relationship is there," said Chua.

Being young sellers, both owners leverage social media to appeal to a younger, savvier crowd. But social media is hardly sufficient. Loh and Chua also rely a lot on walk-ins and word-of-mouth advertising, which means, Chua noted, they have to maintain a certain standard of quality.

This means being careful not to sell bad durians to customers, which also means losing money in the short run.

"If the durian is bad, we will tell you straight up that it is bad. If you still want to go ahead with the purchase, you can, but you cannot blame us," said Chua.

The new business is sustainable, but not to the extent that Loh and Chua can pay themselves a regular salary. Loh estimates that it might reach that point in about two to three years' time.

"Perhaps when we get a stronger customer base," said Loh. "Not so soon.... It'll take some time."