A Grab ride can be a pleasant one as long as both driver and rider are kind and considerate towards each other.

Similarly, displeasure can arise when either party goes overboard with their behaviour.

In a Facebook post on June 6, a Grab driver recounted an unhappy exchange with a rider from Telok Blangah.

The rider had booked a 6-seater GrabCar past midnight despite having a total of seven passengers, including six adults and a toddler.

Although the rider gave the driver a heads-up, the Grab driver later clarified that he could only see the note after accepting the ride.

According to the Road Traffic Act, any passenger is shorter than 1.35m ought to have a proper booster or child seat onboard.

Grab riders, in this case, are advised to select Grab Family instead.

Furthermore, the number of passengers has already exceeded the maximum capacity of a 6-seater car.

As such, the driver requested the rider to cancel the booking as he did not want to break the law.

The driver also reminded the rider to cancel the ride within the given period, so that she does not incur additional costs.

However, the rider refused to cancel the booking.

While you might expect the Grab rider and driver to be caught in gridlock because neither of them are willing to cancel the booking, the driver had no qualms about cancelling the booking.

The driver also notified Grab about this incident, which would supposedly prevent the rider from booking 6-seater GrabCar for the night.

The rider clearly did not find herself in the wrong, as she displayed the mentality that "customers are always right" and warned the driver to know "who you [are] dealing with". 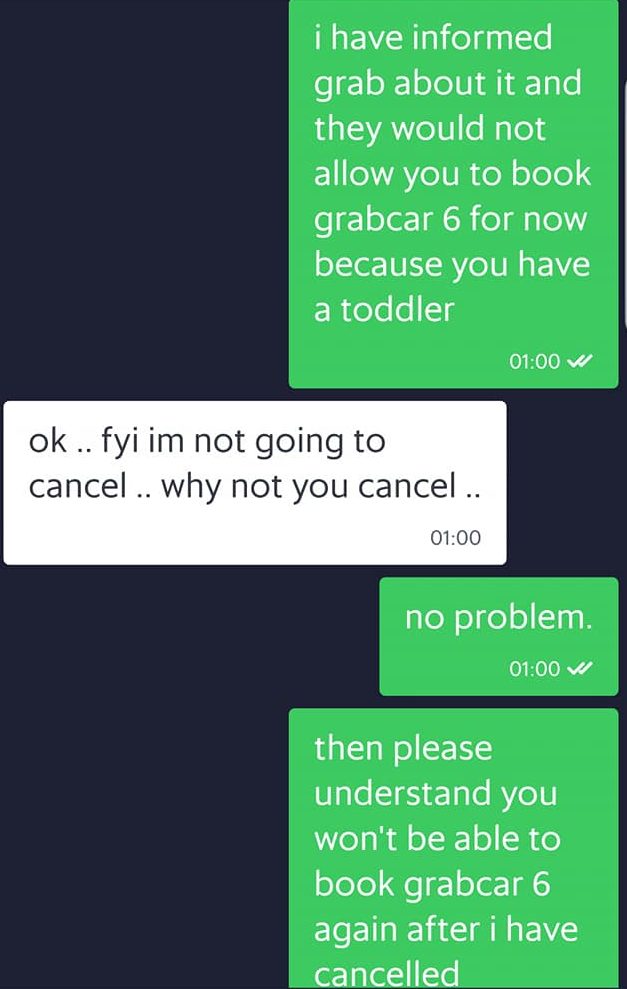 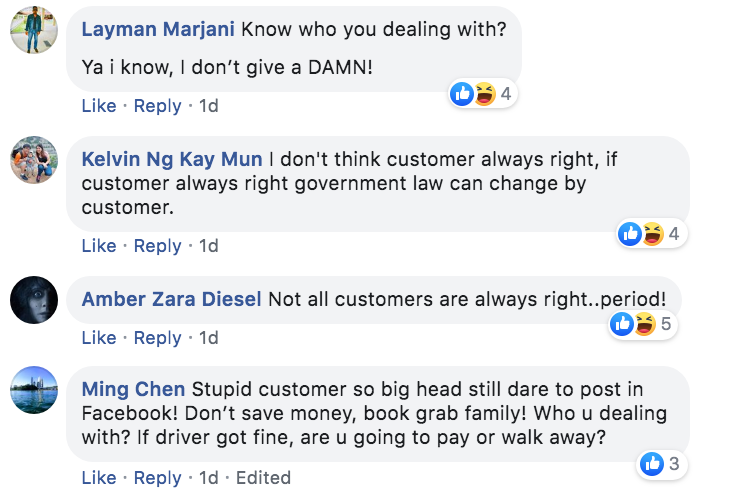 [Update on 10 June 12:18pm] We've received the following statement from a Grab spokesperson:

"We encourage both passengers and driver-partners to treat each other with respect and kindness before, during and after the ride. Our driver-partners’ welfare is important to us and we evaluate our passengers’ ratings on an ongoing basis. Passengers who have repeatedly displayed errant behaviour towards our driver-partners may be suspended from the platform. We are currently investigating the case."