Minister for Home Affairs and Law K Shanmugam aimed a few jabs at technology companies in his speech in Parliament yesterday (May 7).

Speaking during the debate on the Protection from Online Falsehoods and Manipulations Bill, Shanmugam singled out the role of tech companies in the process.

He began by emphasising that tech companies were not enemies, but partners, and the authorities had to work with them to solve the problem of online falsehoods.

But he said that they needed to be clear about the financial and profit motive of tech companies, and the fact that they had "little incentive" to do things that will affect their bottom line.

Online platforms, including social media sites which do not comply with correction notices, face potential fines of up to S$1 million.

Shanmugam said profits must not be made at the expense of Singaporeans, and added:

"And they know that the Singapore Government cannot be bought. We don't take money from their lobbyists. And we mean what we say."

He referred to the proceedings of the Select Committee on Deliberate Online Falsehoods in 2018, which produced a memorable encounter between himself and top Facebook representative from Asia Pacific Simon Milner.

He said that while the authorities have had productive discussions with these tech companies, they were left in no doubt that they could be pushed back if necessary.

Shanmugam then turned to his attention to an opinion piece written by Jeff Paine, published in the Straits Times (ST) on May 4 (paywalled).

Paine is the managing director of the Asia Internet Coalition (AIC), an association bringing together leading Internet and technology companies.

In his commentary, Paine wrote that the "overwhelming consensus" is that the Bill will impact freedom of expression and curtail the rights of individuals to express opinions.

Paine also called for more transparency over the exemption clause of the Bill, which allows any person or class of persons to be exempt.

In response, Senior Minister of State for Law Edwin Tong wrote his own piece in ST (also paywalled) to rebut Paine's arguments.

This included a response to Paine's call for transparency over the exemption clause. Tong said:

"I find this particularly surprising, for surely Mr Paine must be aware that this provision primarily benefits technology companies. Exemptions can be given where technical constraints impede compliance with the law.

The clause appears in various other legislation, for the same reason. Of course, if Mr Paine's comments in this regard truly represent the views of his clients, the Government is prepared to consider removing this clause."

After Tong's piece, AIC tweeted that they "appreciated" the government's efforts: 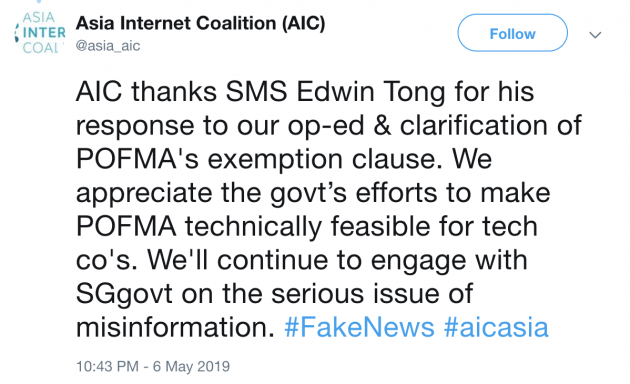 Shanmugam commented that the response was "swift", and that the clause was in there for the benefit of tech companies.

If the AIC had not responded before the debate, the government would assume that the AIC did not want it.

Shanmugam said that tech companies would try and advocate their position, but the government had to be fair and firm. He added:

"They can do business with us honourably. Singapore provides a proper rule of law framework for everyone, but they must also be responsible."