I went to the same primary school where my mum taught at.

When I told my colleagues about this, someone joked that I have to raise my hand to ask for permission if I want to do anything at home.

People have a lot of ideas of what it must be like living with a teacher or going to the same school she works at. For instance, I have heard people remark several variations of the following sentences:

“Oh your mum’s a Chinese teacher right! Your Chinese must be very good!"

"You live with a teacher, how can your studies be bad?"

"So you get special treatment in school?"

But their expectations or ideas were more often than not completely removed from my reality.

Ever since my first day in Primary One, my mum and I would head to school together every day.

In the first few years, before my dad had to scrap his car, he would drive us — after that, my mum and I took the school bus instead.

There were never any awkward classroom interactions between us because she never taught the classes I was in. There was just one relief class that she sat in for — it went fairly uneventfully, in case you were wondering.

When I was in upper primary and had to stay back in school for CCAs or enrichment classes, I would wait for my mum to be done with her work at her staffroom desk before heading home together.

Waiting for her in the staffroom

In front of classmates and other students, I always addressed her as 'Zhou Lao Shi' ('Madam Chow' in Chinese), just like I would with any other teacher.

But in the staffroom, where I was allowed to sit and wait for her, I'd still affectionately call her 'mum'.

While my mum was busy with her own work, I occupied myself with less gainful activities, such as playing games on Cartoon Network, and watching Naruto episodes on YouTube on her laptop.

(I promise I still managed to finish my homework, though... okay, fine — there were a few times those episodes were more exciting than my homework.)

There were kids like me as well in the office, but interactions with them were mostly limited.

I distinctly recall this brother-sister duo. Their mother's cubicle was closest to the side exit of the staffroom, and they were very studious when it came to homework.

Unsurprisingly, given their discipline, I didn't get to play with them much, save for one time the brother showed me his prowess in a flash game. 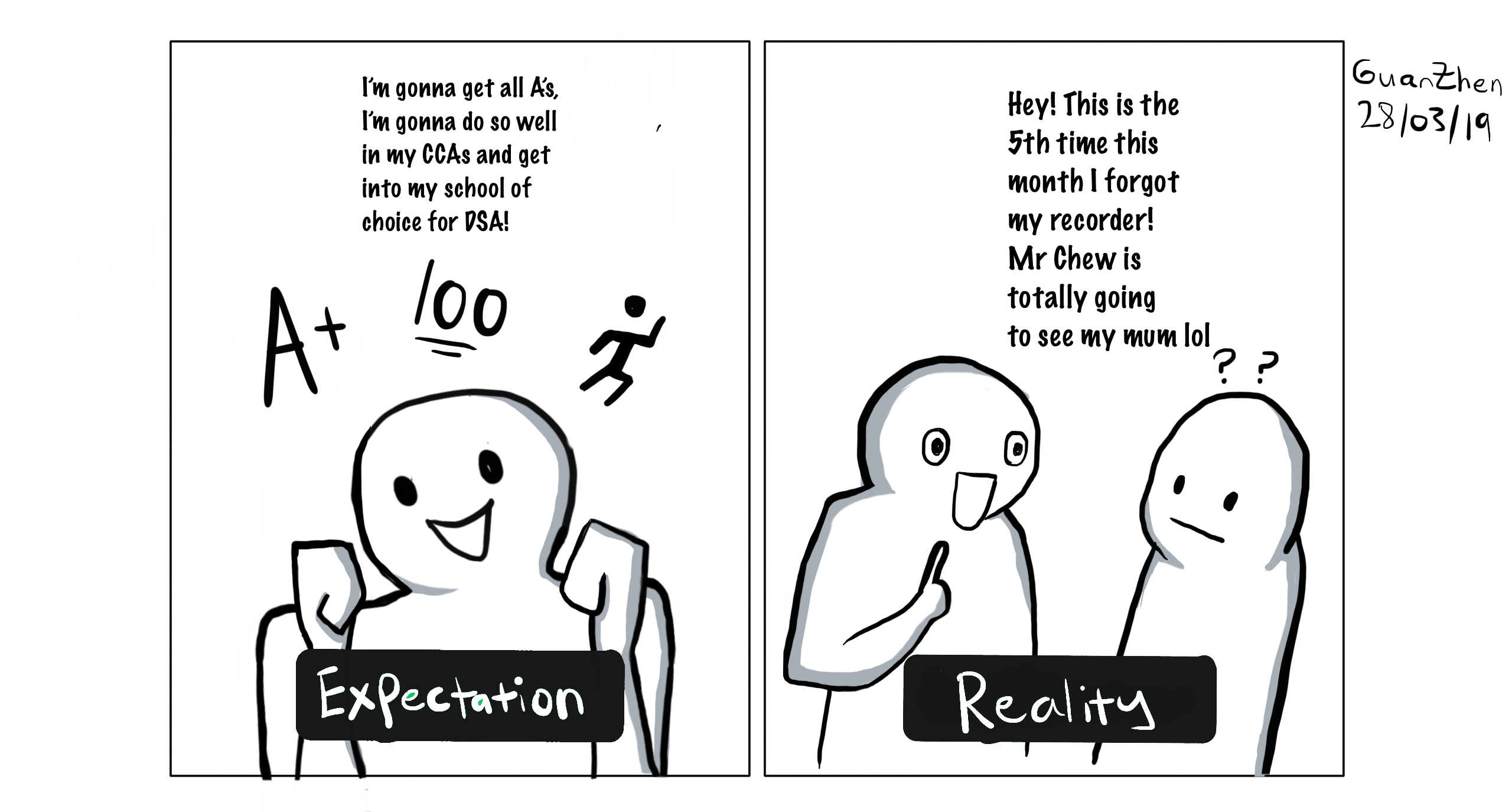 Clearly, most of my classmates would not have had the same experience of going to school and seeing their mum there on a daily basis.

But I never thought much about it. After all, it was just what everyday life was like for me at that time.

Hence, it came (and still comes) as a surprise for me to hear someone ask if having a mum for a teacher meant that I had access to 'special privileges' — like hints for exams or leniency when it came to school rules, for instance.

And my answer was and still is no, there was nothing of the sort.

Apart from my mum being well-placed to guide me academically, she hardly meddled in my school affairs — she would not helicopter me out of sticky situations, nor would she help me out if I had done something wrong.

She may be my mother. But in school, she was also a fair teacher who believed in being professional, and abiding by the rules.

As such, I had my fair share of standing outside classes. I was also punished accordingly for sleeping in class, failing to hand in my work, or forgetting to bring necessary materials to class.

People assumed I must be good at studying

Upon learning that my mum is a Chinese teacher, many instantly assumed that I speak flawless Chinese. A handful also believed that I must be extremely academically-inclined.

For the record, while I know how to order eggplants from the cai png stall, I'm not exactly super-proficient.

Let's just say that the reason why my mum never taught me was that she always taught the better classes, and I was never among the most stellar students in school.

It wasn't that my grades were totally dismal — I managed to score a handful of As and Bs — but it wasn't as if I was particularly studious either.

That explains most of my grades in science and math, where I either scraped through or failed consistently.

So, in a bid to push me, my mum tried to help by getting me assessment books, tuition and of course, offering to guide me herself.

But I would say these efforts were eventually futile in piquing my interest in the various subjects I was weak in.

They proved ineffective in changing the fact that my favourite period in school was recess, and I was far more interested in toys and Saturday morning cartoons than I was in textbooks or academic learning. I was reluctant to ask my mum for help

To make matters worse, I was also quite stubborn when it came to approaching my mum for help. I didn't like doing so at all, fearing that the credit of my own achievements would be overshadowed by the fact that I had her guidance.

Once, I scored really well in Chinese. I was initially really pleased, but my joy was dampened when a classmate remarked that it wasn’t surprising given who my mum was.

Such comments made me feel like my academic achievements were undermined, and I recall feeling that I wanted my efforts to be recognised for what they were, rather than as an expectation to be met.

Thankfully, years after leaving school, I no longer receive these comments in the same frequency.

Even when someone makes a similar remark these days, I can quite easily compartmentalise it without feeling anywhere near annoyed.

It could also be because people don't go around asking what your parents did just like when I was younger.

It helped that I didn't pursue anything related to the Chinese language after Junior College, lifting that weight of expectations from my shoulders.

No longer did I have to anchor my mum's identity with mine, and it's been rather freeing ever since.

The sacrifices my mum made for her students

It's been over 10 years since I graduated from primary school. My mum has since retired and mundane details about what I learnt in my classes have long since been lost.

But after having plenty of first-hand experience watching my mum tirelessly slogging away at her job, the one thing that stuck with me throughout my life has been an awareness of how teachers, like my mum, always put others first.

Growing up, I noticed that even at the end of a very long day at school, she would still have to buy dinner for the family.

She would lug home worksheets and books from school, which she would have to mark late into the night. I remember occasionally waking up to see my mum still working on her PowerPoint slides or grading papers at 2am, only to wake up again at 5am to get ready for work.

I also clearly remember that there was a time where she would take a particular seat on the school bus.

It was more of an uncomfortable side bench, and I was too young to think to ask why she'd not let the other kids take that seat instead.

I have since established that as a teacher, she wanted to let the students have the 'better' seats.

Unfortunately, there was one morning where the driver jammed really hard on the brakes, causing her to lunge forward and injure herself.

In the interest of her safety, she was asked to sit elsewhere on the bus after that, but her gesture of always wanting the best for her students stuck with me.

These days, my mum often remarks that she doesn't know how she brought up my siblings and I during the whirlwind of her teaching years.

The answer is remarkably simple: She did it the only way she knew how.

On most days when I had to stay behind in school, she'd buy lunch for me so I would have more time to eat, rather than spending most of the short break queuing up and then having to wolf down my food.

There were also times where she'd go on immersion trips with students for about two weeks during the school holidays.

On one particular trip, I told her something along the lines of wanting Digimon toys.

Seeing as how teachers aren't likely to have much free time on trips like these, she could have totally just disregarded my request and placated me with excuses.

But no, she made time to look for the toys I wanted.

Even if what she eventually bought wasn't the exact item I was hoping for, she tried to find something to make her kid happy, to show that she cared.

Everyone should be more understanding towards teachers

I don’t think a person needs to know a teacher personally to understand what they go through.

Stories like this early childhood educator's surface on social media from time to time, and with each story, it reminds people of their sacrifices and struggles.

And while constructive criticism is important for teachers to improve the quality of teaching, it irks me when I see people belittling what teachers do, ignorant of the sacrifices they make for their students.

There's a lot we don't think about when it comes to our teachers; our association with them often ends when the last bell has rung.

Most of us reading this now have long left the classroom, but we still have room to become more understanding parents and individuals, in order to facilitate better environments for teachers, and by extension our children or loved ones who become their students.

As for me, despite my mum teaching in the very same school, and knowing the education system a little better than most parents, she just let me...be me.

I didn't have to change just because she was a teacher; sure, I didn't graduate with three acceptance letters from applications under the Direct School Admissions scheme, nor was I the top of my primary school's cohort.

But more importantly, I think I made it out happy. And that is the best thing my mum could hope for.