Screenshots of a group of men displaying a dead clouded leopard were uploaded online on May 8, 2019.

The post, uploaded to Facebook group Hiking & Camping Around Malaysia, has garnered more than 800 shares and 1,700 likes.

Appeared to be showing leopard off

Siva Nadarajan, who uploaded the photos to the hiking group, claimed to have taken them from another Facebook group.

The unidentified men in the photos can be seen holding up and displaying a dead clouded leopard.

The photos appeared to be originally taken and uploaded to the other Facebook group by a user named Max Mantra.

However, a search on Facebook revealed no such user.

The caption claimed the creature was caught near Tampin, in Dangi, Malaysia.

Here are the rest of the screenshots and photos:

Could not lodge a report as everyone had gone home

Siva stated in his post that he had tried calling Jabatan Perhilitan Semenanjung Malaysia — the Department of Wildlife and National Parks (Perhilitan) Peninsular Malaysia, which is the governmental organisation responsible for the management and protection of all of Malaysia's wildlife and national parks.

Siva had called the organisation at 3pm, intending to lodge a report when he saw the photos of the men and the clouded leopard online.

However, the staff from Perhilitan who picked up his call reportedly did not accept his request, saying "everyone has gone home".

Siva claimed that the operator redirected him to the specific state agency that managed the Tampin area, where the leopard was allegedly caught.

It is unsure if Siva managed to lodge a report in the end.

Several men in blue uniforms, with one wearing an orange beret, could be spotted in the background of one of the photos. 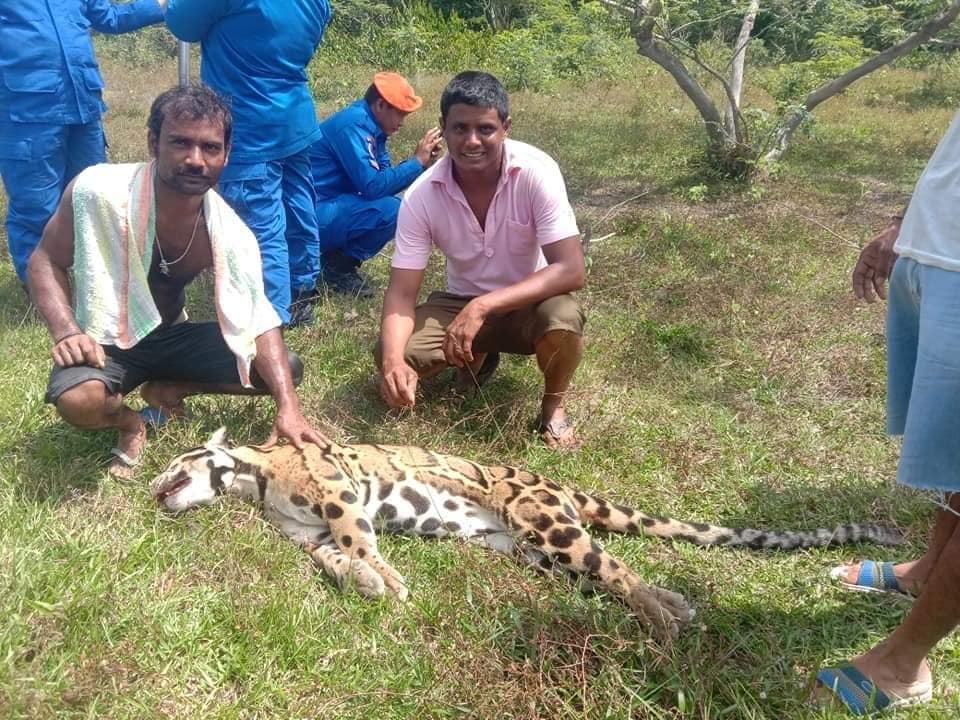 According to Siva, these men were from the JPAM, presently known as the Malaysian Civil Defence Force.

It is uncertain if these men truly belonged to the agency and if so, why they were present at the scene.

Clouded leopards, so named after the blotchy 'clouds' on their body, are known for their unique fur patterns. They are native to Malaysia and other parts of Southeast Asia.

Their populations have been slowly dwindling due to poaching for their fur and bones in the traditional medicine trade. The species has now been classified as vulnerable according to the IUCN.

According to The Star, a recent amendment to Malaysia's Wildlife Conservation Act 2010 as of April 2019 will increase the minimum penalty for poachers.

Those caught can face a fine of RM1 million and five years in jail. The Act is expected to be tabled in December 2019.

Here is the full translation of Siva's Facebook caption:

"Just saw this in some group. They claim caught in Dangi, Tampin [sic]. But I see some JPAM guys there too .

Good on Jabatan Perhilitan Semenanjung, wasting money on these operators."