Local artistes Carrie Wong and Ian Fang are embroiled in a borderline sexting scandal following the leak of two sets of conversations.

In the latest development, Wong's Taiwanese boyfriend Boris Lin released a public statement on May 18, 2019.

Lin said he stood by his girlfriend and asked Fang to stop coming between them.

Following Lin's public statement, Fang put up an Instagram post with a paragraph of Chinese text on May 19, 2019 at around 1.30am.

Along with the post, Fang also wrote a summary of the post in the caption to apologise and to seek a second chance.

He also mentioned in the post that he has also appointed a lawyer to handle any false accusations made against him.

The hullabaloo in these few days had taught me a great lesson in life. I realised that whatever I say and do will have great influence and consequences to bear. As a public figure, I did not set a good example. I admit my wrongdoings and am deeply apologetic.

I would like to say sorry to those who have been implicated in this incident as well as Mr Lawrence Wong, for the inconvenience and unintended harm caused. I will not let those who love me, support me down or let my mum be heartbroken and cry again.

One who did something wrong should admit and bear the responsibilities, I will bear all the consequences from this incident. Upon reflection, I will be more mindful with my actions and behaviour. I promise to learn humbly in the future and work doubly hard. I am very grateful to those who did not give up on me -- my friends and concerned viewers. To my fans who never forsake me, managing agency TCA, I would like to thank you all from the bottom of my heart for the support and help.

My personal privacy has been intruded, I have appointed a lawyer to handle any false claims. I hope to be given a chance to make things right and prove myself. Thank you, everyone, for the concern. To act a role according to the script well, I'll have to perform my role in real life well first -- there is just too much I have to learn. I will face every day bravely and start afresh.

Translation: You treated women like toys, can't forgive you!

Translation: I just want to say, this matter blew up only because you are a public figure. However, I will support you till the end no matter what just like how you render help to me when I have nothing.

Translation: Be a mature man too, after all, you are no longer young, love those who love you well. Jiayou!

Fang's fan page has also posted an Instagram story to protect Fang from naysayers on May 18, 2019: 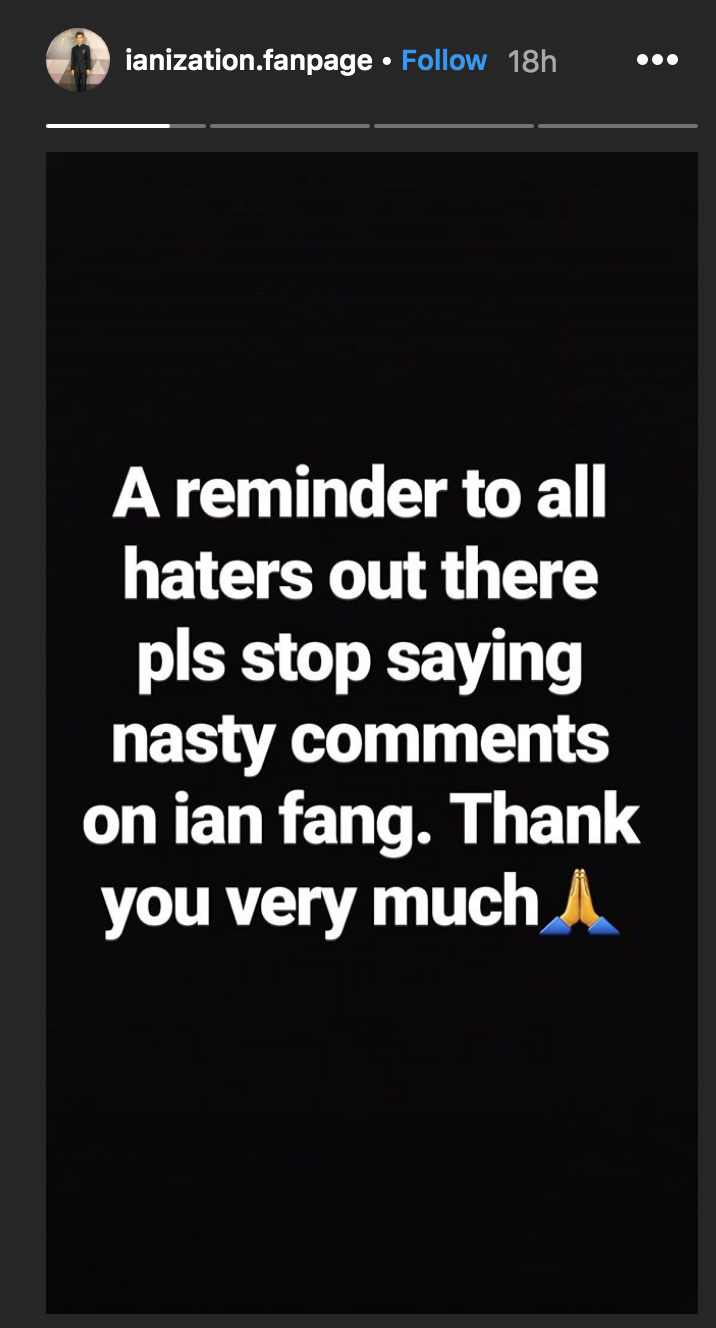