You might have heard that Gram Cafe from Japan is coming to Singapore:

And you might also know that Singaporean F&B brand Tiramisu Hero had to change their name in Japan due to a certain copycat:

These may seem like two pieces of disparate news.

Except that the company that copied Tiramisu Hero's logo and name are allegedly behind the Gram Cafe coming to Singapore.

To make things even more complicated, the Gram Cafe coming to Singapore (which is the same one that is massively popular in Japan) reportedly stole the name and logo from the original Gram cafe in Osaka, which has since closed down.

On this controversy, a piece was written by a Japan-based Singaporean on a website, Gaijinhan.

Here's a breakdown of what we know about the case.

Original Gram rebranded, then closed down

However, slightly more than a year later on Aug. 7, 2015, Original Gram announced that they will be rebranding themselves as "Bran Cafe":

They also thanked their customers for frequenting their store.

A google search confirms that the place is now permanently closed. 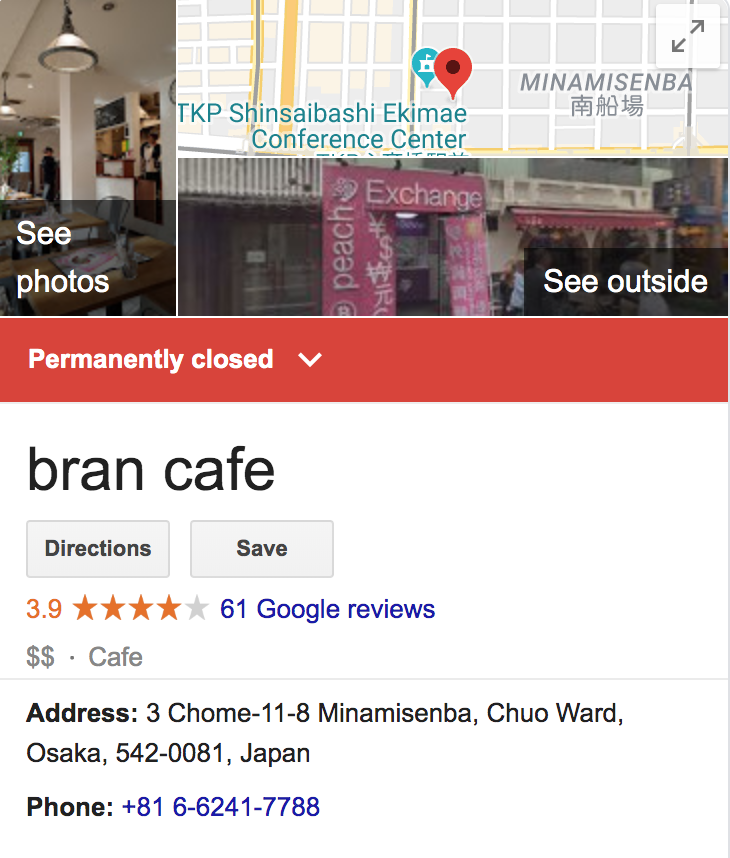 According to Gaijinhan, however, the true reason for the Original Gram's closing was because another company had stolen their name, therefore, forcing them to change their name to "Bran Cafe".

But the name "Gram Cafe" had become so popular that diners continued to visit the pirated Gram Cafe, not realising that it is not the original cafe.

Subsequently, Pirated Gram even expanded with many outlets in Japan.

One can imagine how Bran Cafe's business might have been affected, leading to their closure.

Nonetheless, some Japanese netizens eventually caught on to the similarities, and weren't too happy with the pirated Gram.

This tweet compares the logo between the two companies:

A customer who had wanted to eat the pancakes again wrote: "Bran Cafe was the Origin Gram... This is terrible." 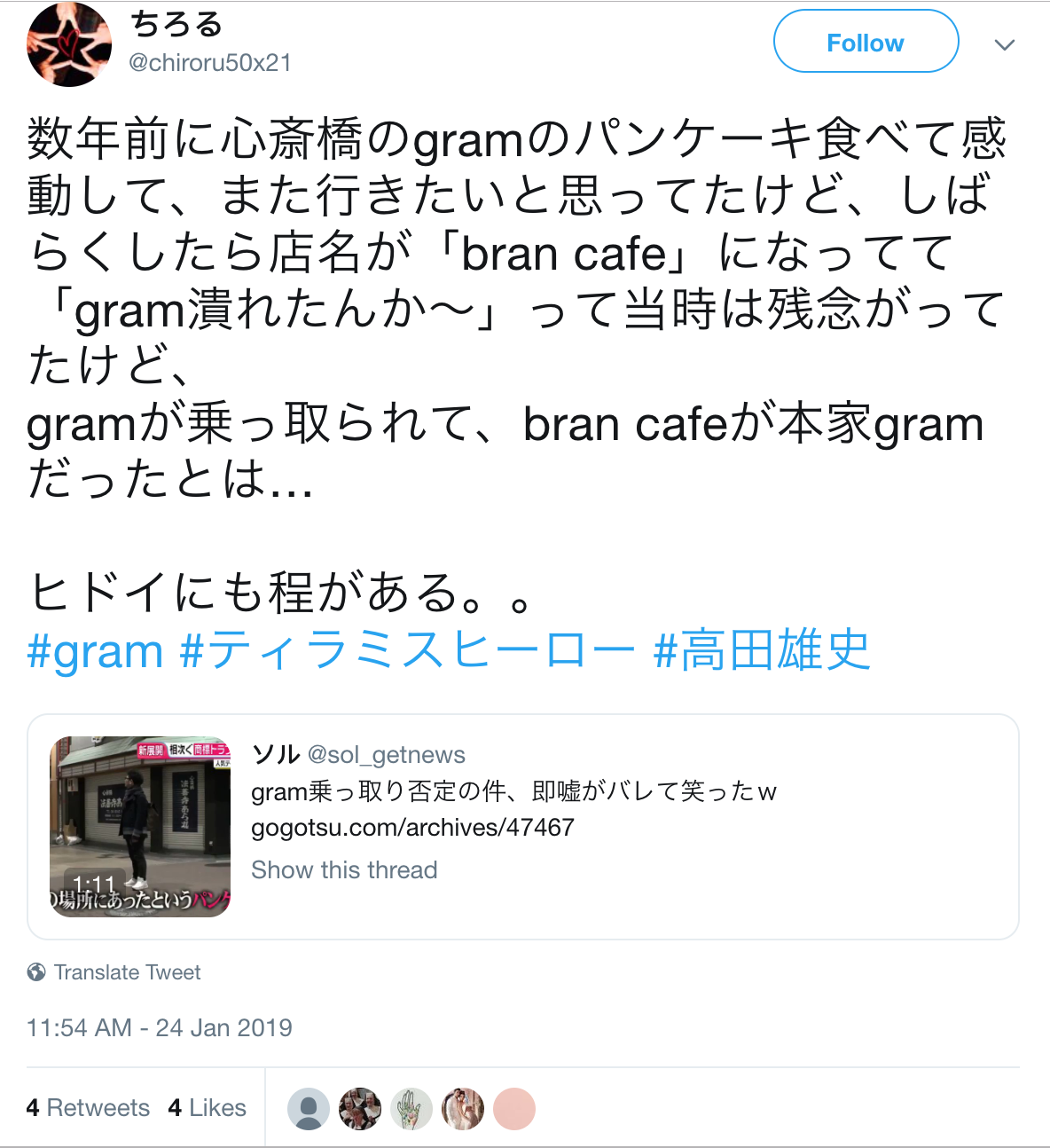 At least one netizen attacked Takada Takeshi, who they believed was the person behind Pirated Gram.

This comment was found on Bran Cafe's closing announcement:

"Was your trademark (referring to the logo) stolen? Was the cafe sold? To the copycat bastard Takada..."

In fact, the saga was even reported on Japanese TV:

A translation of the segment:

Narrator: “Here’s the spot of the popular pancake shop that opened about five years ago (referring to 'Bran Cafe' a.k.a the original Gram Cafe).

Three years ago, the representative of “Hero’s” trademarked the same name (referring to 'Gram cafe').

As a result, the shop was forced to change its name, and unfortunately, closed down in May last year.”

Interview with a Japanese person: “A shop’s name is the most important thing to the shop. So, if a shop’s name is suddenly taken away from it, honestly speaking, wouldn’t it be hard on the shop?

I feel sad and helpless about the situation.”

In response to the news reports and social media furore, Pirated Gram issued a statement on Jan. 24, 2019.

However, Japanese speakers, both native and non-native, have found the statement deliberately confusing.

“The story that trademark 'Gram' did not belong originally to Gram Pte. Ltd. is fake.

Gram cafe’s first outlet was set up on April 23, 2014 at Minamisenba (a shopping district in Osaka) by our representative, Takada.

Before then, it was selling some other food items.

Takada then changed the nature of operation and started selling pancakes, and the shop became the first outlet of 'Gram cafe'.

At that time, it was a small business.

Thereafter, due to criticisms from netizens on social media and various media outlets, Gram Pte. Ltd. was set up.

The location of the original store of Gram Pte. Ltd. at that time was the same as the first 'Gram cafe'.

In August 2015, the first outlet of 'Gram cafe' moved from Minamisenba to Shinsaibashi.

During the move, Gram Pte. Ltd. sold our first shop itself to the founder of 'Bran cafe' which later opened on Aug. 8.

The rumours resulted from misunderstandings generated on Facebook that confused 'Gram cafe' with 'Bran cafe' as they both occupied the location where the first 'Gram cafe' used to be.

Some parts of the statement don't actually make logical sense, but the bottomline is, Pirated Gram is refuting the allegations that they stole Original Gram's name and logo.

In fact, Pirated Gram even asserted that they sold the premises of their first shop to the founder of Bran Cafe, which they say is how the "misunderstanding" started.

By now, you might be somewhat convinced that the current Gram Cafe is a pirated version.

But are they also the same company that stole Tiramisu Hero's trademark in Japan?

A simple check on the official websites of both Pirated Gram and Pirated Tiramisu Hero revealed that their Representative Directors have the same name -- the aforementioned Takada Takeshi.

In Japan, a Representative Director is the most senior executive in charge of managing a corporation that is registered in the country.

In addition to having the same name, both Representative Directors also look uncannily alike: