You might have heard of an impending three-day, staggered closure of up to five stations on the North-South Line (NSL) during the Vesak Day long weekend.

This is to facilitate the works of a crossover track at Canberra station.

If you’re a Singaporean noob like me, you’d think that Canberra is just the capital city of Australia.

While that is true, there is also a small town in Singapore by the same name.

Canberra is a small town located between Sembawang and Yishun.

Sounds like a really ulu place with nothing fun to do, right?

Here’s a list of things you can do and find in Canberra when the spanking new Canberra station is ready by the end of this year!

What sets Canberra Park apart from all the other neighbourhood parks from Singapore is that it has an inclusive playground.

This inclusive playground has ramps and wide paths so that wheelchair users can join in on the fun.

In addition to that, children with disabilities can also play with specially designed play equipment like these set of swings with a lap bar to ensure the safety of the user.

Apart from that, the playground also has an interesting dinosaur skeleton structure:

And the most interesting part of the playground: The NEOS 360 electronic game station.

The NEOS 360 offers eight different games that can be played as an individual or even a team.

The 1.6-kilometre route starts from Canberra link and joins Sembawang Park, where cyclists can take a break and enjoy the view of the Johor Straits.

And cycling novices shouldn’t have to worry as there are wide, designated paths for cyclists in Canberra.

If you’re looking for a place to eat, Canberra is also where Flying Wok is located.

The Standard Mama Wok (S$13), for example, can feed up to two pax and has ingredients like shredded crab meat, scallops and squid.

The more extravagant Jumbo Mama Wok (from S$49.90) is meant for a crowd of seven to 10 people and has more ingredients like chicken cutlet, cheese sausages, prawns and mushrooms.

How to get to Canberra?

While these things may sound interesting, how do you get to Canberra, though?

Very soon, Canberra will be easily accessible via the North-South line, right between Sembawang and Yishun MRT stations.

Canberra MRT station will be one of the MRT stations to have a crossover track.

For those who don't know, a crossover track is an additional track that allows trains to cross from one track to another, in case of a track fault.

The great thing about this is, it allows train services from both directions to remain available if there happens to be a track fault!

To facilitate the construction works for the crossover, up to five MRT stations will be closed for three days from May 18 to 20: 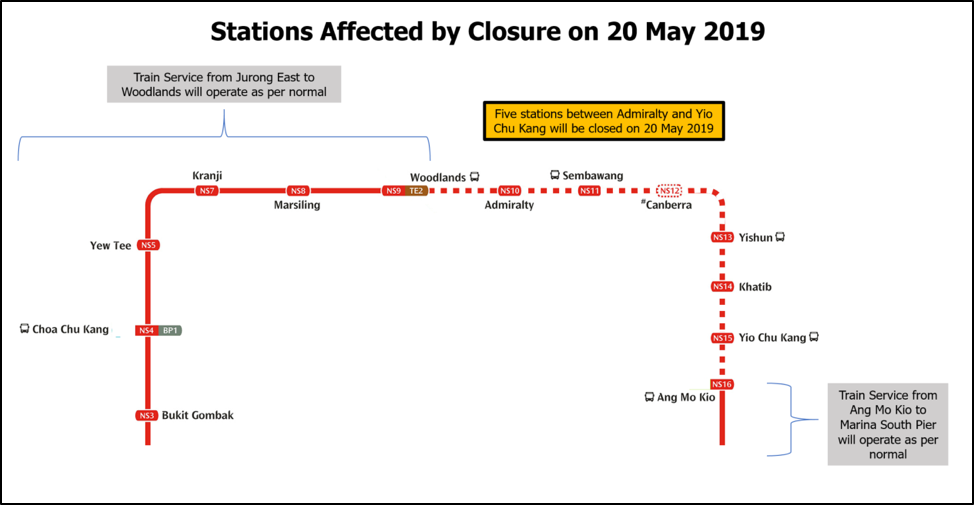 In addition to that, there will also be a point-to-point bus service between Woodlands and Bukit Panjang on all three days so residents in the North can get to the city easily via the Downtown line.

In case you’re confused, here’s a table for easy reference:

This sponsored article by the Land Transport Authority has informed the writer that Canberra isn’t just in Australia.