One smoker recently took to Facebook alleging that he was fined for having one foot outside of the smoking zone.

Apparently had one foot outside of the box

The man claimed that he was recently fined at Grange Road for smoking.

As of April 1, enforcement has kicked in for those caught smoking outside Designated Smoking Areas in the Orchard Road precinct.

He clarified that he was aware of that Orchard Road precinct has become a No Smoking Zone, and smokers would have to smoke at designated areas.

Apparently, he said that he was fined for smoking with one foot outside of the demarcated box.

Claiming to have not known about this rule, he supposedly told the enforcement officer that he would move inside the box.

Responding to Mothership's queries, NEA stated that they have reviewed the case and explained that their officers had "observed the male subject smoking outside of the DSA".

According to NEA, this was corroborated with video footage.

In their statement, NEA clarified that:

"Enforcement action will be taken as long as a smoker is seen to be holding a lit cigarette, or smoking outside of a DSA."

They also confirmed that the man was ticketed for standing along the boundary of the DSA, and stated that the enforcement officers were "in line with (their) standard operating procedures".

This is NEA's statement in full:

The National Environment Agency (NEA) has investigated the incident where a male subject claimed that he had been ticketed for standing along the boundary of the Designated Smoking Area (DSA) in the Orchard Road No Smoking Zone. NEA has reviewed the case and is satisfied that the actions taken by the enforcement officers were appropriate and in line with our standard operating procedures. Our officers had observed the male subject smoking outside of the DSA and approached him, and he was cooperative throughout the engagement. This is corroborated with video footage showing that the male subject was smoking and standing outside the DSA.

Since 1 April 2019, NEA has started taking enforcement action at the Orchard Road No Smoking Zone. Enforcement action will be taken as long as a smoker is seen to be holding a lit cigarette, or smoking outside of a DSA. In situations where smokers see that there is insufficient space in the DSAs, they are advised to head to the next nearest DSA, or wait until there is sufficient space to move into the DSA. These are efforts that can be taken to reduce the exposure of second-hand smoke, and everyone can play a part by reminding smokers not to light up in smoking prohibited places, and to be socially responsible and considerate when smoking in public places. 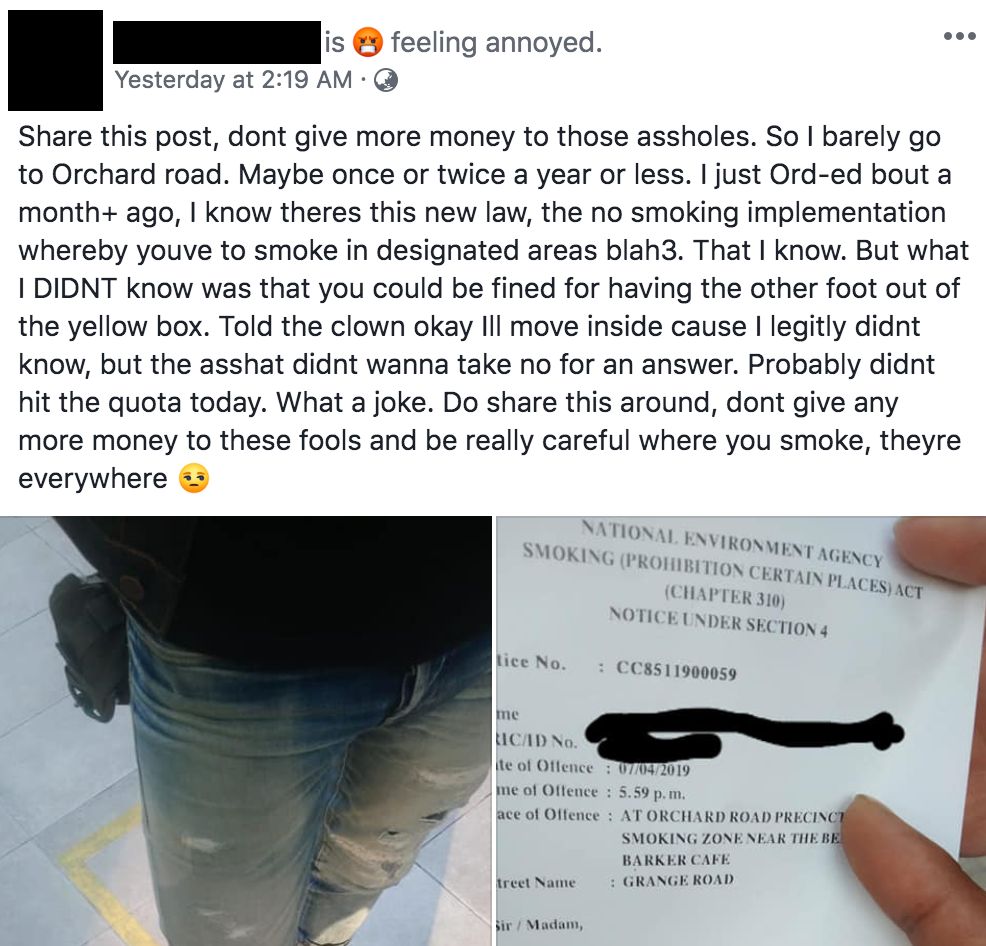 Before his post was taken down, the story was picked up by Malaysian media China Press and World of Buzz.