The Samsung Galaxy Fold will be released soon.

As with most phones, review pieces have been provided in advance to some tech reviewers.

Some of them have promptly gone ahead and had it broken.

SUPER YIKES: something happened to my Galaxy Fold screen and caused a bulge. I don’t know how it happened, and I’m waiting to hear back from Samsung. It’s broken. https://t.co/p1014uB01D pic.twitter.com/3FZJkWtSKr

The screen on my Galaxy Fold review unit is completely broken and unusable just two days in. Hard to know if this is widespread or not. pic.twitter.com/G0OHj3DQHw

One reviewer noted how seemingly widespread the problem is.

This is incredible. Three separate specimens of a $2000 product breaks within days of being sent to three different reviewers - in three different ways. No matter what happens with replacement units, nor what the explanation, why would you have confidence in the product? https://t.co/sqv76En0S1

A possible explanation for the breakage might be due to the protective screen layer.

This is the protective layer:

Dear future #GalaxyFold owners, I know I always say "No one ever read the instructions"... PLEASE READ THIS ONE!!!

(This is the wrap over the screen of the Galaxy Fold) pic.twitter.com/LuQPRfDZIE

And for at least one of them, it appears to be the case.

The phone comes with this protective layer/film. Samsung says you are not supposed to remove it. I removed it, not knowing you’re not supposed to (consumers won’t know either). It appeared removable in the left corner, so I took it off. I believe this contributed to the problem. pic.twitter.com/fU646D2zpY

Some users also pointed out that the protective layer should not be removable if it is that important.

However, CNBC claims their reviewer did not remove the casing but still encountered the same issue.

Here is Samsung's statement as it appears on CNN.

"A limited number of early Galaxy Fold samples were provided to media for review. We have received a few reports regarding the main display on the samples provided. We will thoroughly inspect these units in person to determine the cause of the matter.

Separately, a few reviewers reported having removed the top layer of the display causing damage to the screen. The main display on the Galaxy Fold features a top protective layer, which is part of the display structure designed to protect the screen from unintended scratches. Removing the protective layer or adding adhesives to the main display may cause damage. We will ensure this information is clearly delivered to our customers."

At this point, Samsung Galaxy Fold's release date does not seem to have shifted.

In the meantime, here is a meme, because, of course, people are already making memes about it. 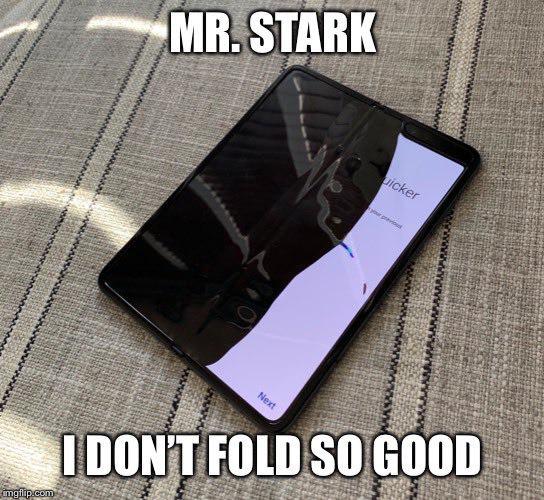