The recent National University of Singapore scandal regarding a man filming a lady while she was showering has set off a firestorm of outrage with regards to the punishment meted out against the perpetrator.

NUS has stated they will convene a committee to review the current disciplinary and support frameworks.

Others feel that isn't really enough.

However, to understand what needs to be done, it is quite important to review what has been done for previous cases.

Here are all the insult/outrage of modesty cases over the past few years, and the disciplinary measures meted out in regards to them.

There were eight cases of outrage of modesty.

Here are the punishments meted out. 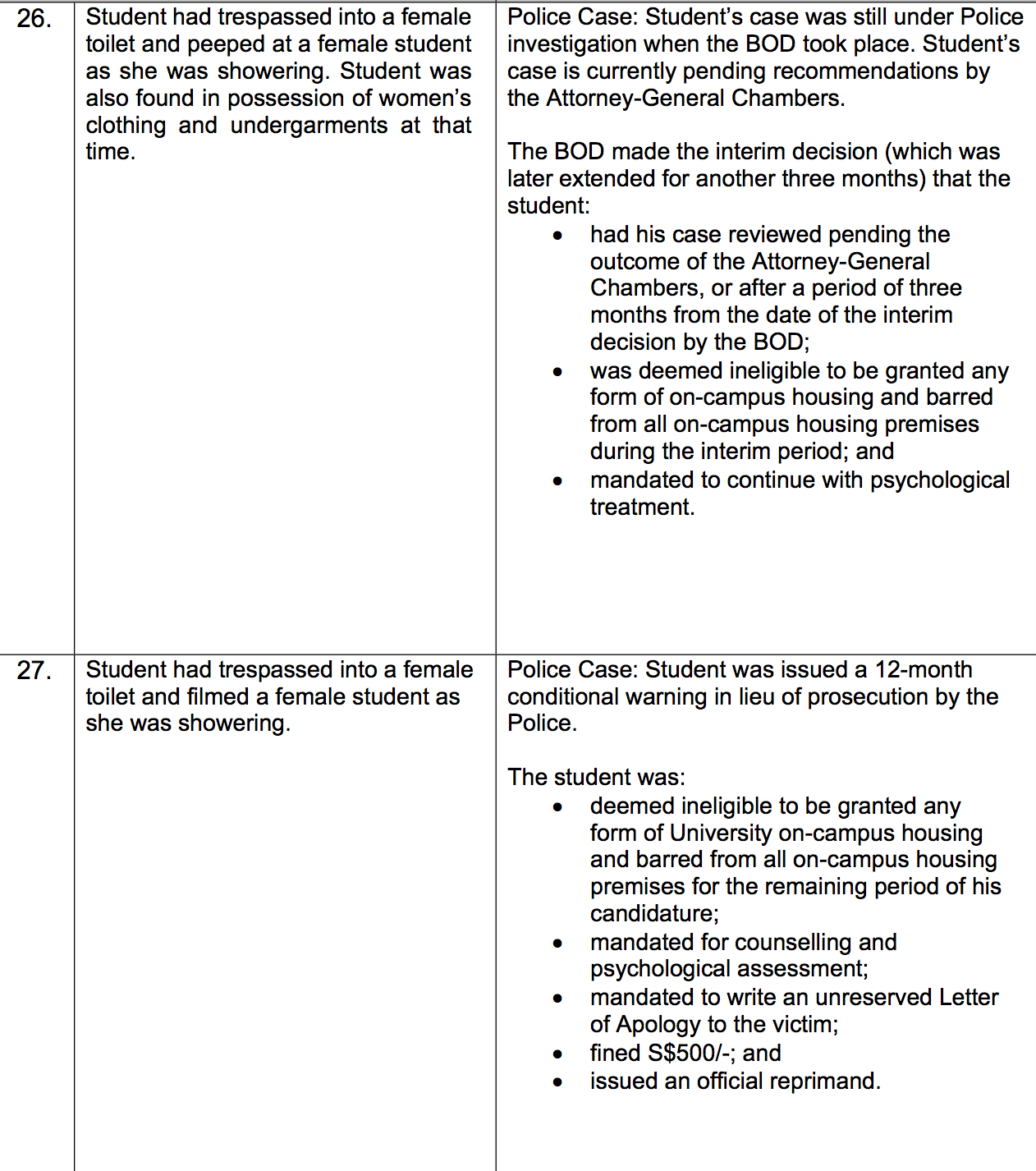 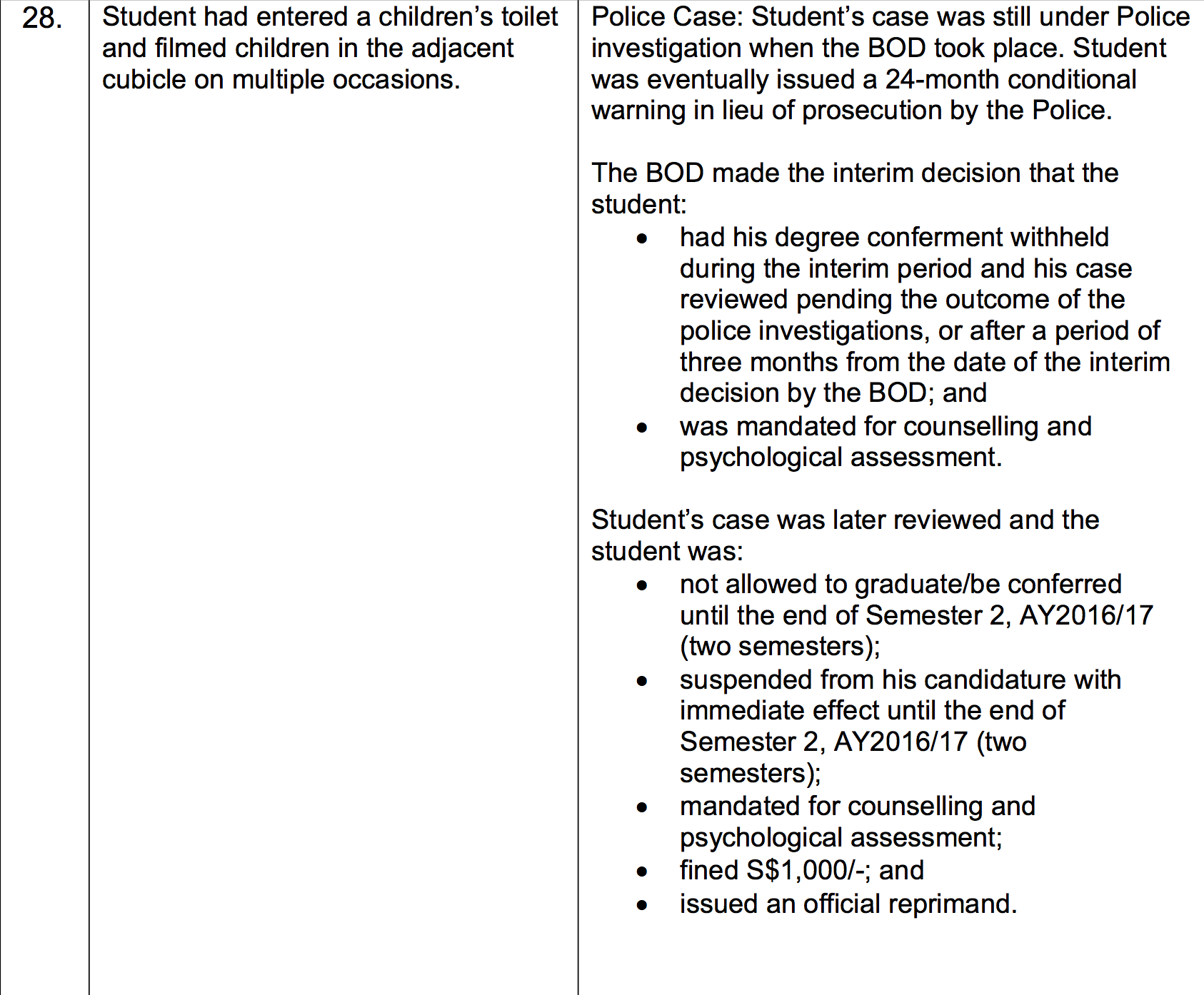 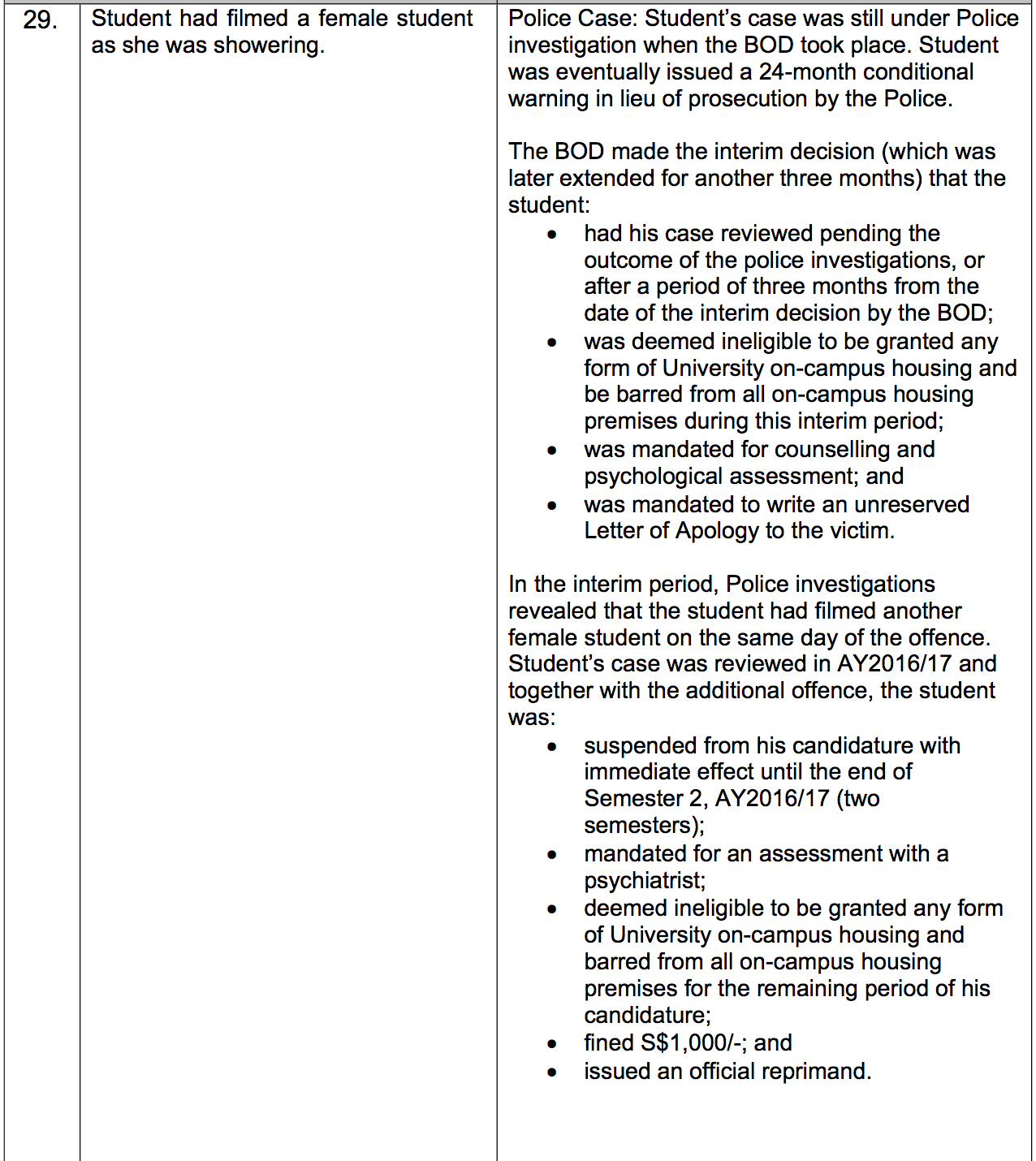 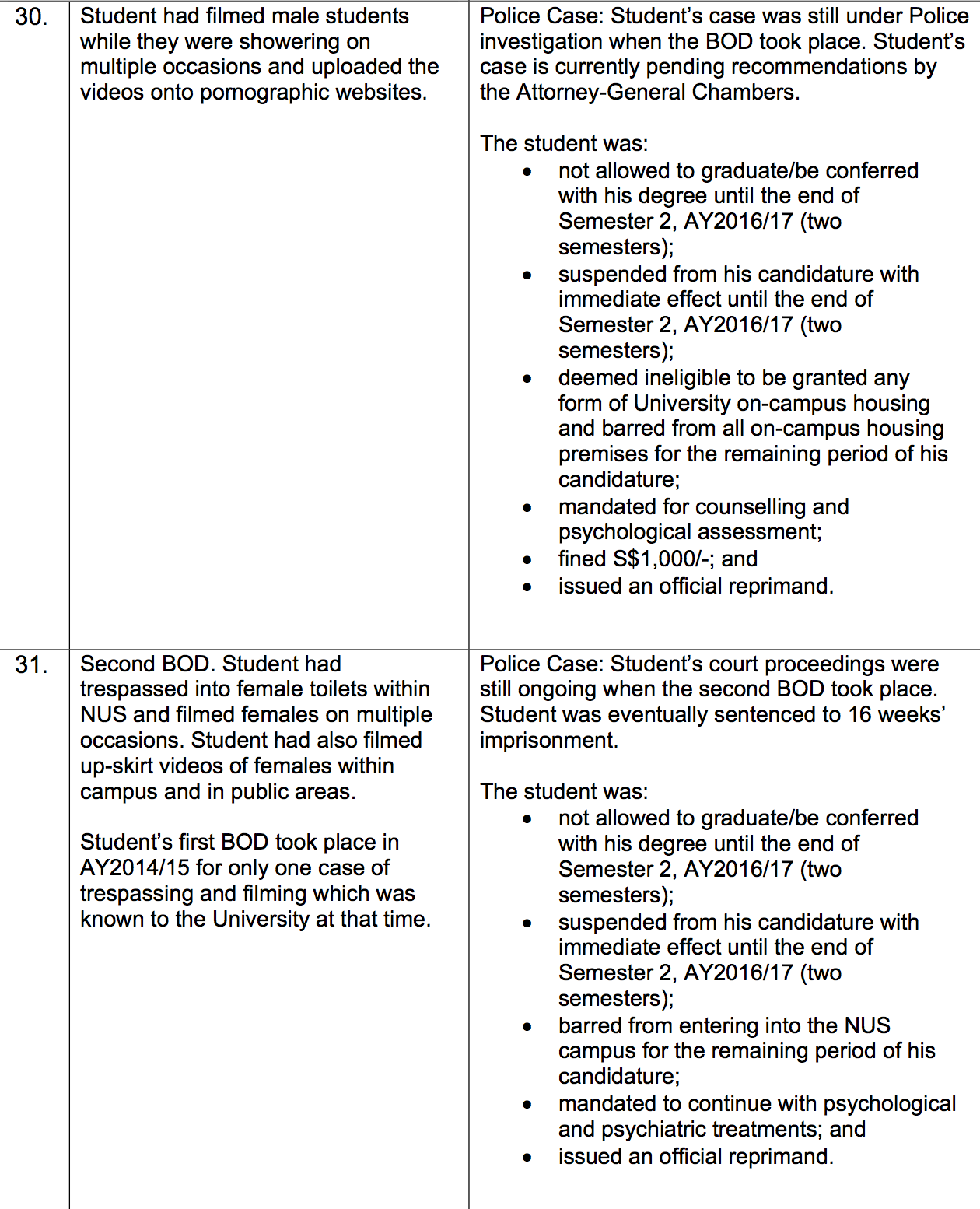 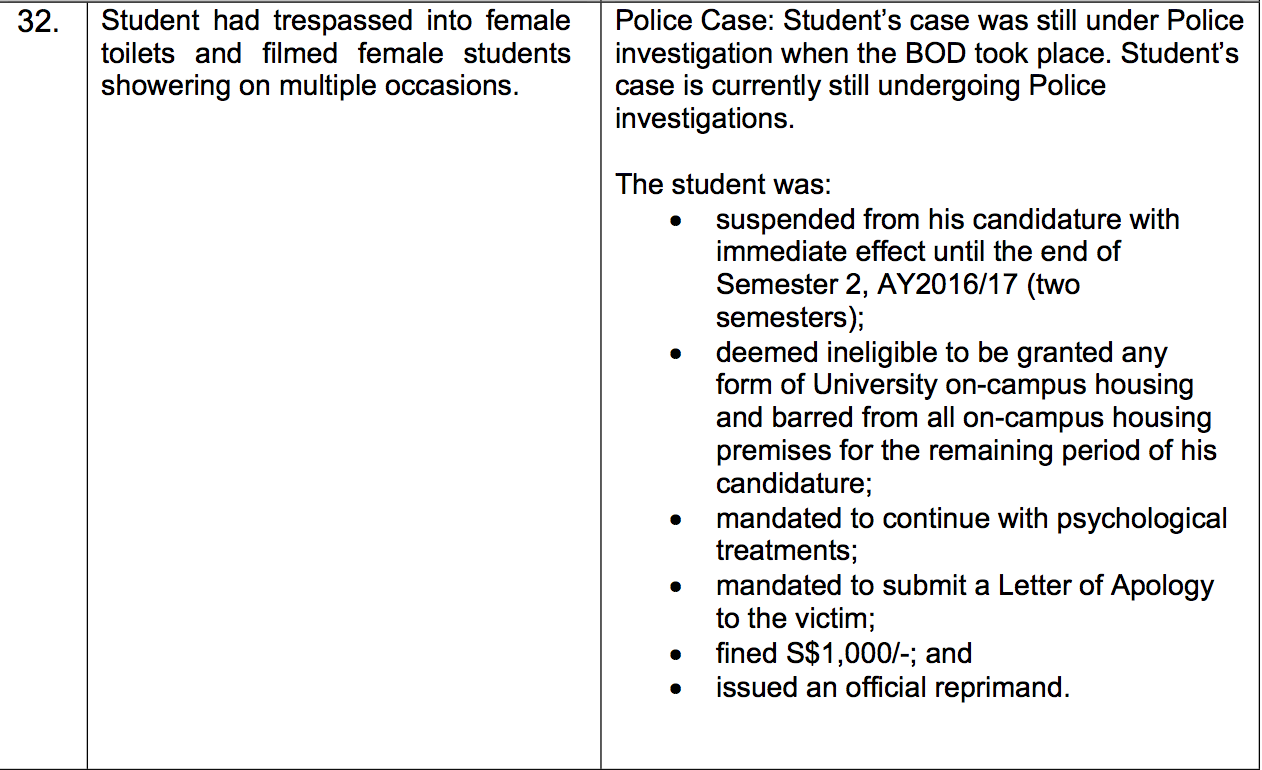 Furthermore, there was one case of assault that fits under sexual harassment, insult/outrage of modesty as well.

Here are some interesting takeaways.

Seven of those cases resulted in the perpetrator being suspended for two semesters.

Two of those cases resulted in them being barred from housing.

There were also three cases of female undergarments being stolen. 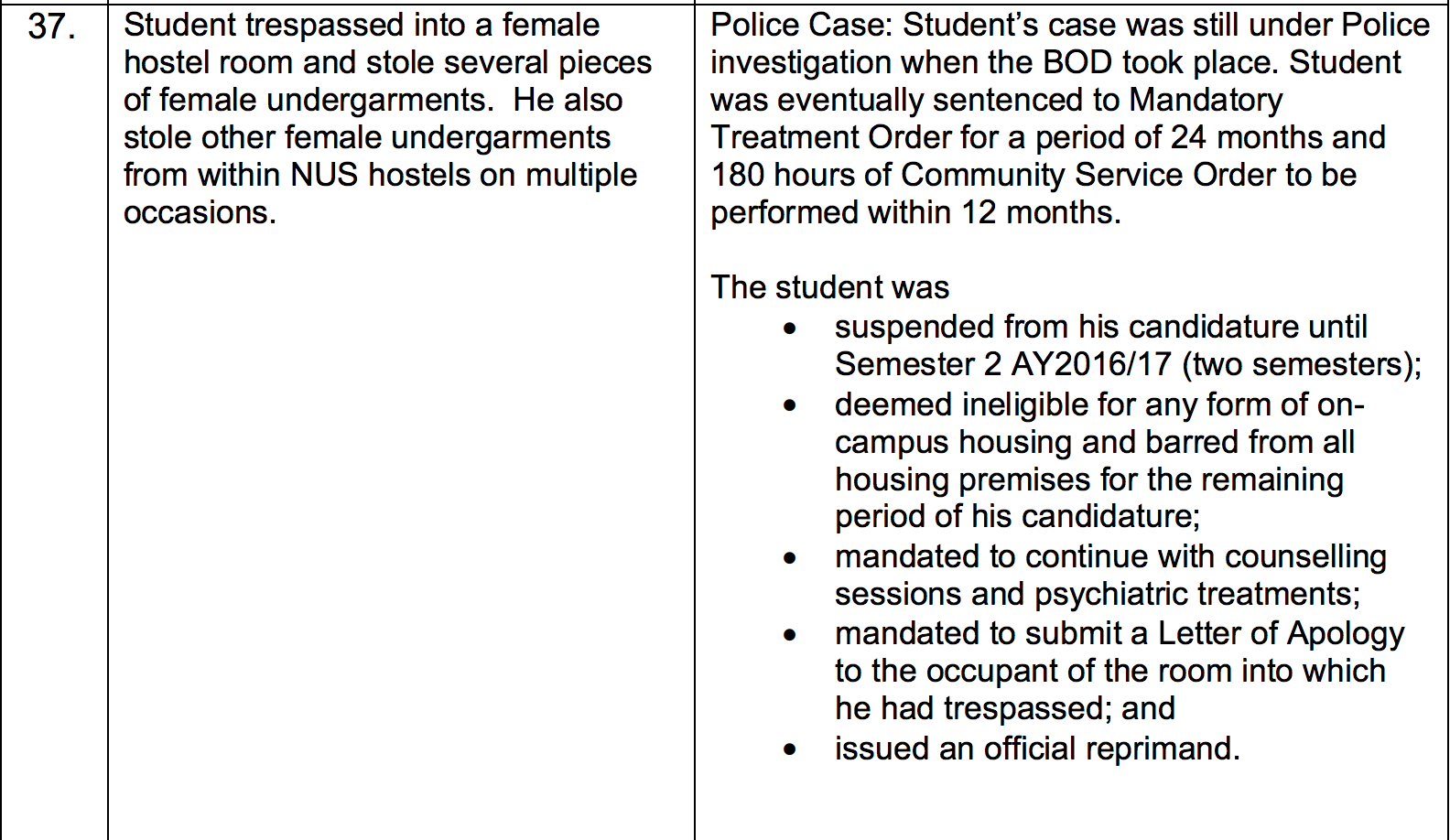 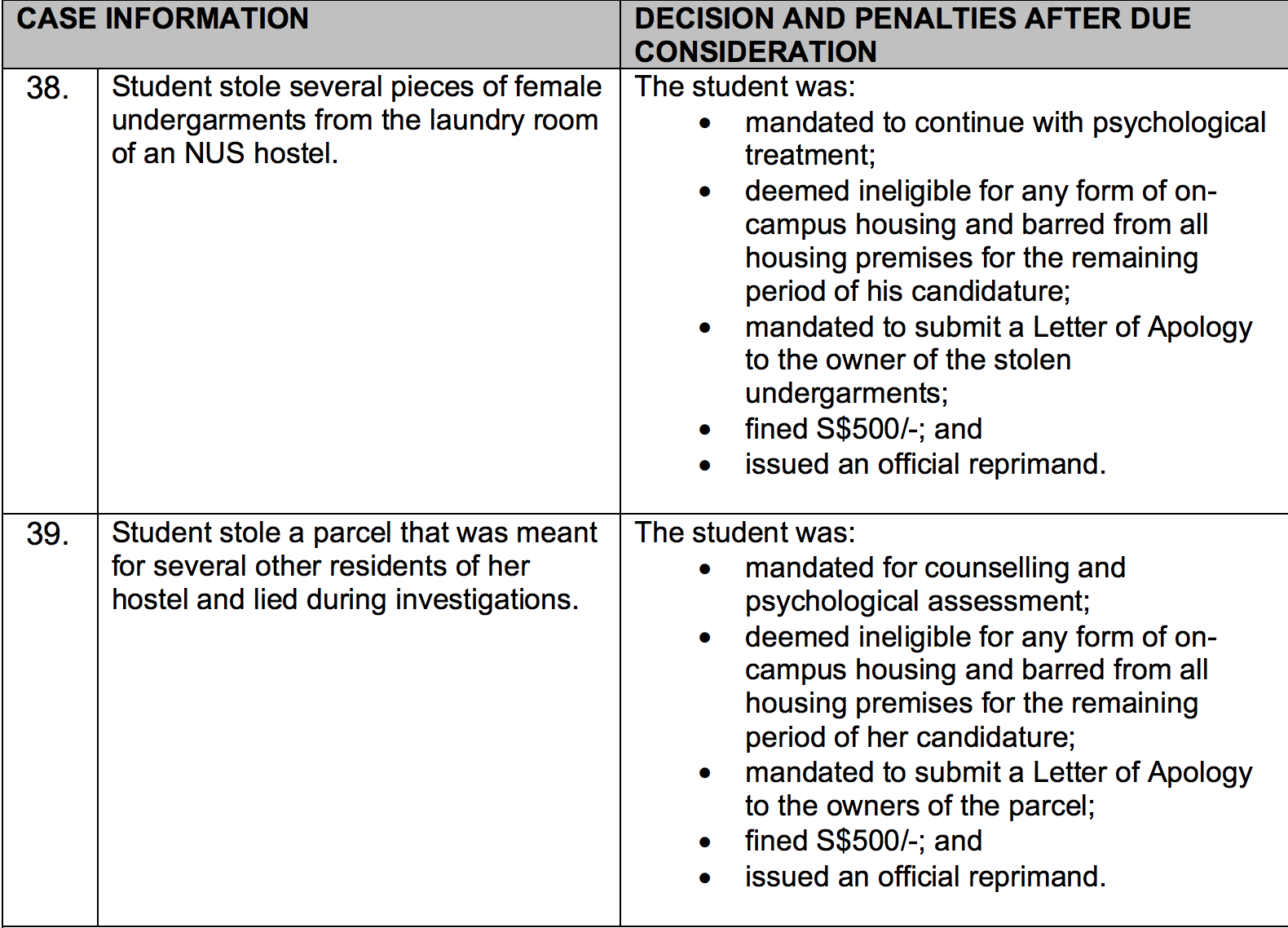 Including the thefts, six cases required a compulsory letter of apology.

There were also eight cases of insult/outrage of modesty during that academic year. 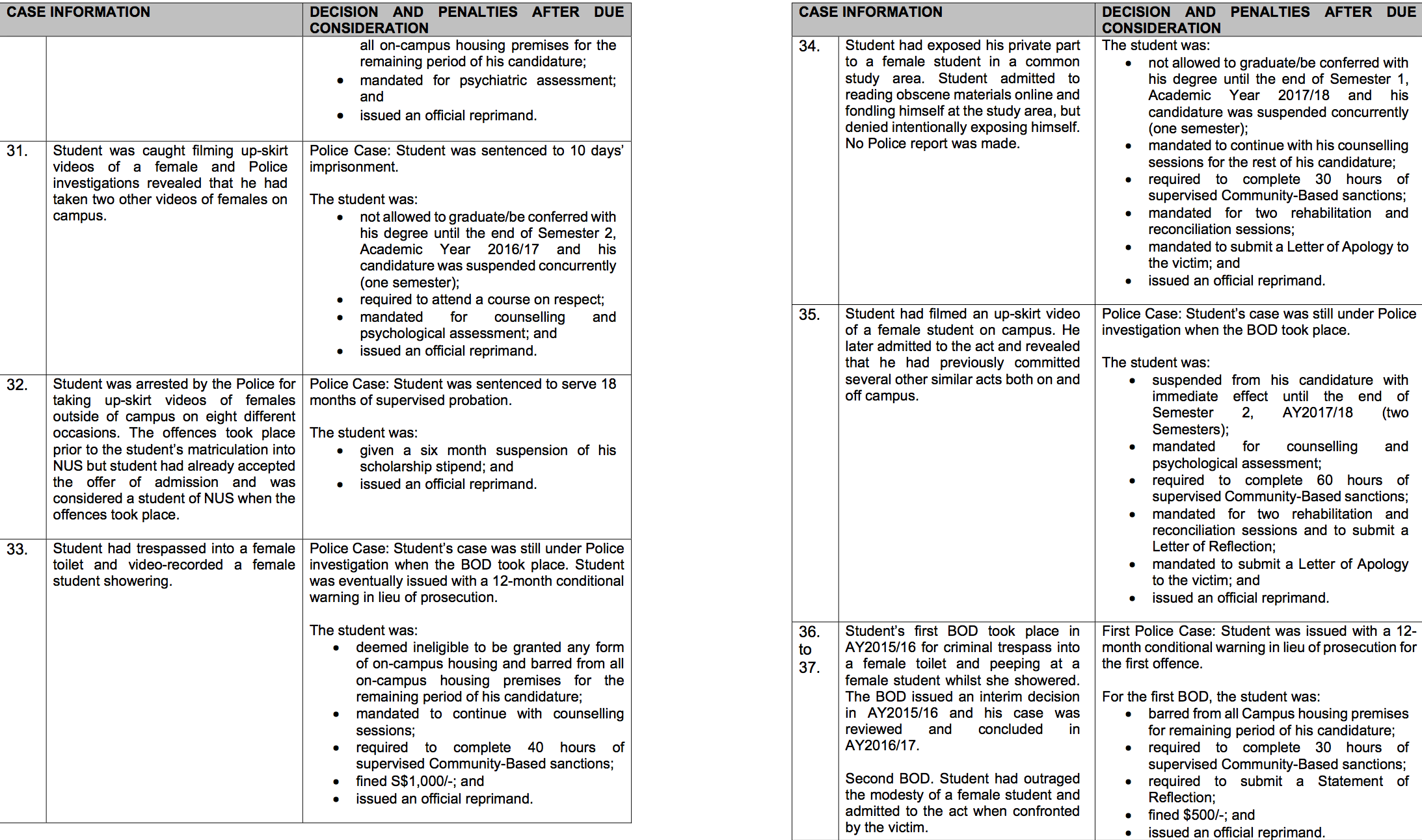 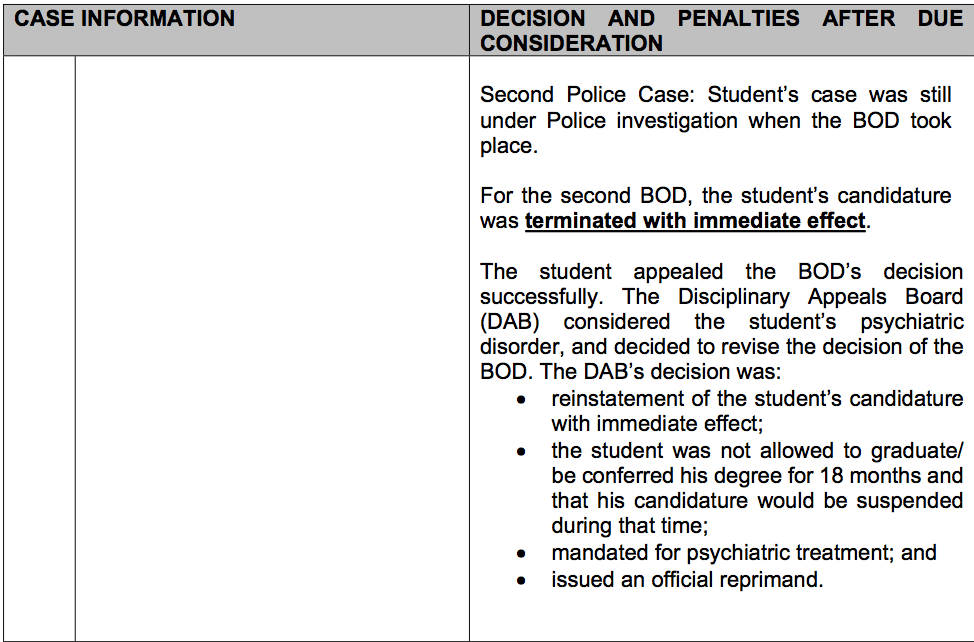 There were two cases filed under harassment that fits under insult/outrage of modesty as well.

There was a single case of someone stealing undergarments.

Here is a breakdown of the punishments meted out.

Three of those cases resulted in a one-semester suspension.

One case netted a two-semester suspension.

Four of those cases resulted in being barred from housing.

There were four cases of insult/outrage of modesty. 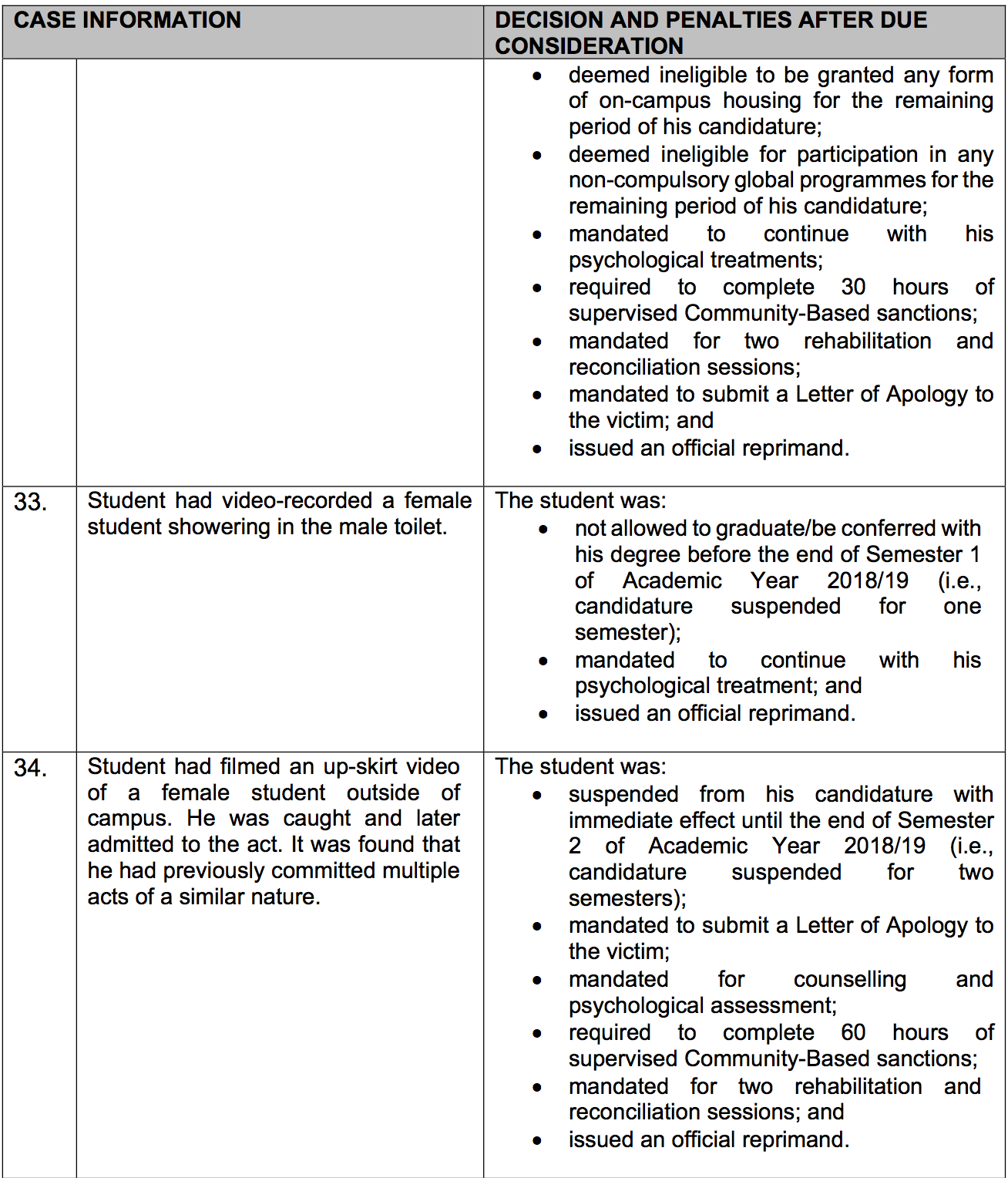 There were three cases filed under harassment that we think fits under insult/outrage of modesty as well. 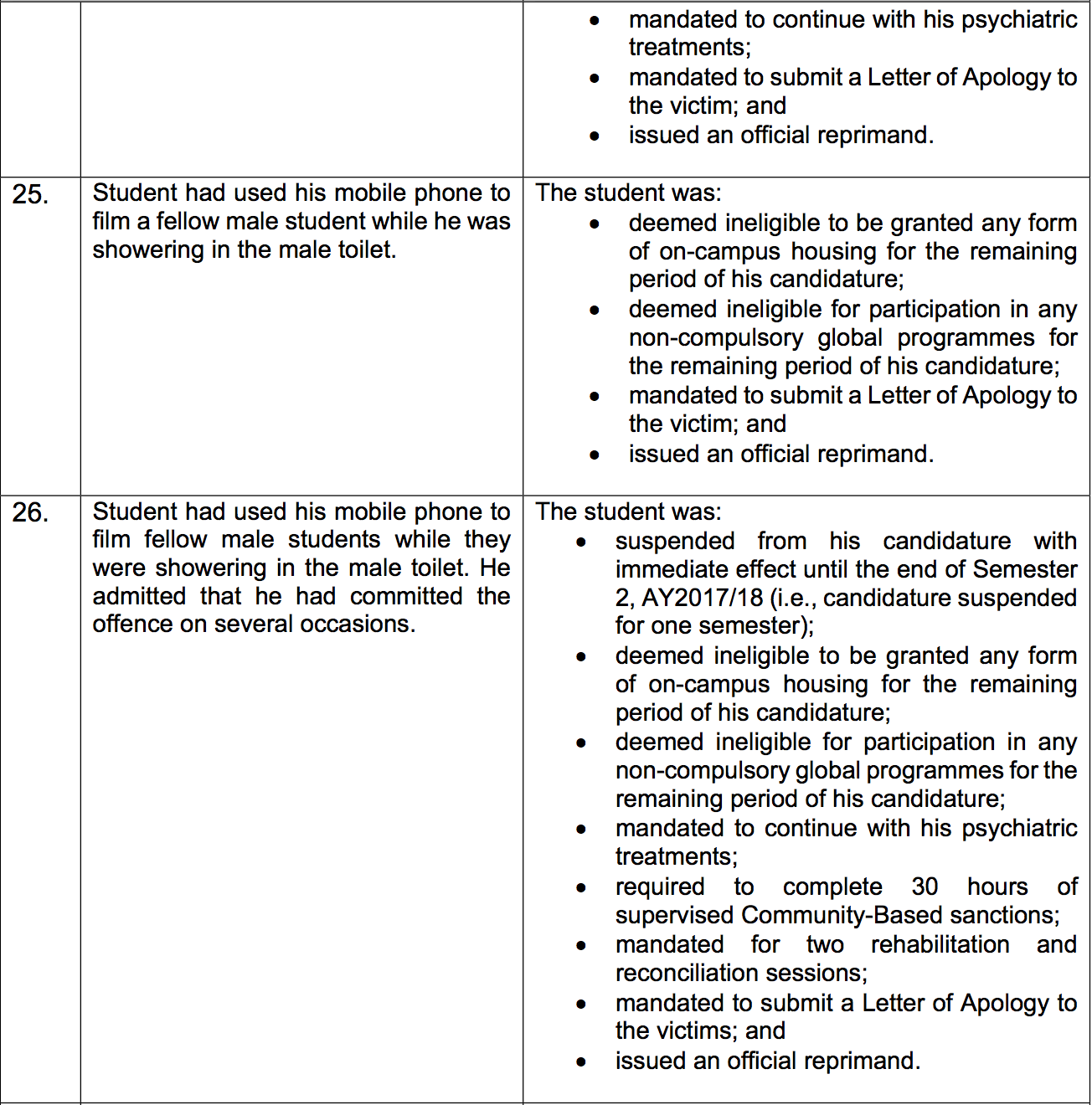 Here is a breakdown of the punishment meted out.

Three of the cases resulted in a one-semester suspension.

One case netted a two-month suspension.

Two of the cases saw the students being barred from housing.

What this tells us

Regardless of what you might think of the ruling, it is quite clear that there are, for the most part, consistent measures taken against those who commit similar crimes.

In fact, here is a case from the 2015 - 2016 academic year, which is strikingly similar to Nicholas Lim's case. 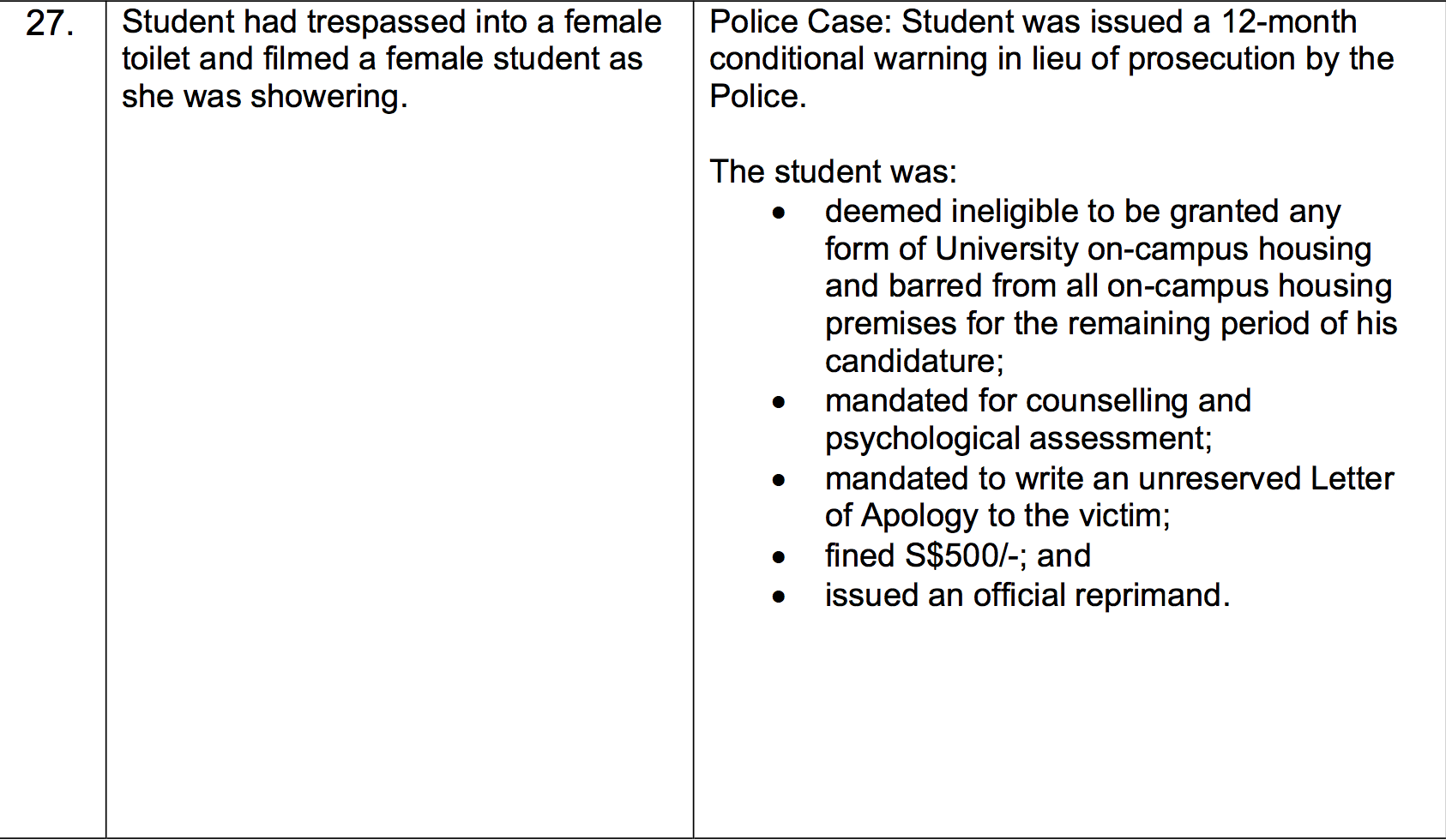 Here was what Lim was charged with.

1. Made to write a compulsory apology letter.

3. Not allowed in the dorms anymore.

4. Gave him a one-semester suspension.

Replace the S$500 fine with a one-semester suspension, and it's basically the exact same punishment.

Which implies that Lim's case isn't an aberration, or an anomaly of NUS' method of dealing with these transgressions.

It is very much the norm in terms of severity of punishment.

Which then leads to the question, is that enough?

The answer to that, at least from the general public, has been rather clear.

You can read the entire PDF documents here.