In Singapore, travelling around unassisted is a blessing for those with some difficulty doing so.

But one of the challenges is having one's photo taken and put online to be ridiculed -- because of the sheer ignorance of the photo-taker.

Man with dog on MRT train

A photo posted on the All Singapore Stuff Facebook page on April 18 showed a man seated in the MRT train, holding a phone to his ear, while a dog laid prone by his feet. The dog was almost resting under the seat, in a position that suggested as if it was trying not to take up too much space.

The photo was taken by a fellow commuter and it was uploaded to Facebook with a caption that sarcastically asked: "Eh, nowadays, can bring pet to MRT ah?"

However, Facebook commenters were quick to point out that the man was likely partially or completely blind, and the dog is his guide dog. 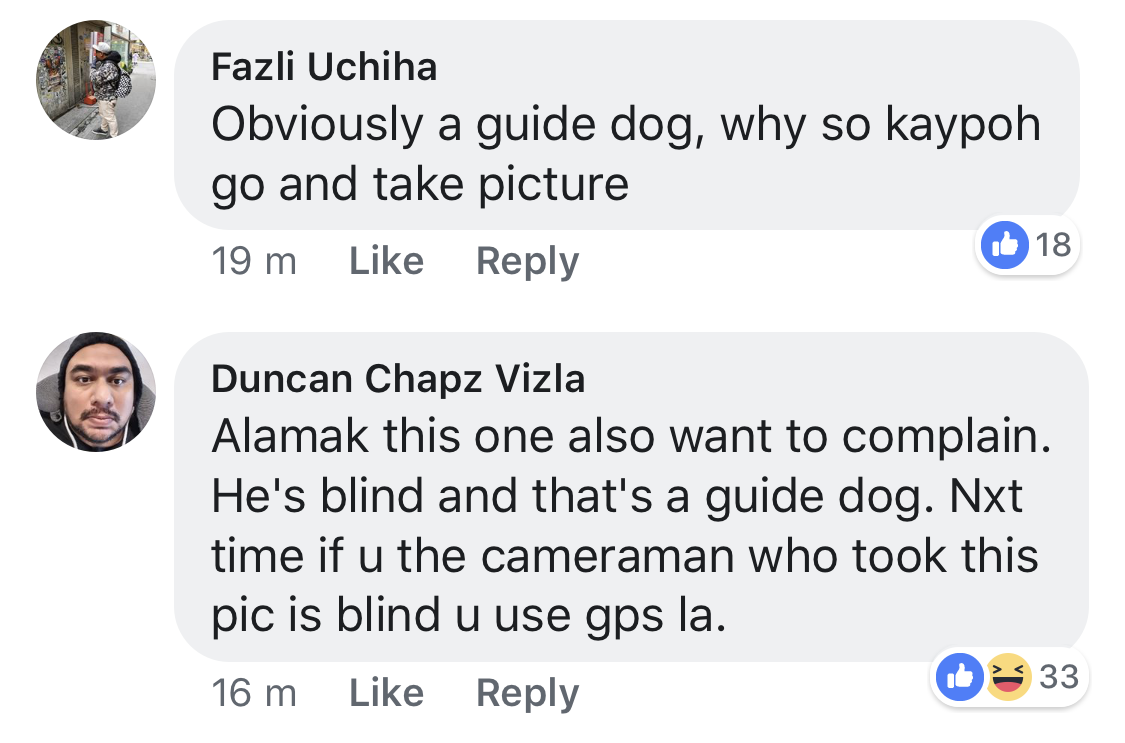 Some commenters also claimed that they had seen the man and could verify that he indeed cannot see.

Most likely a guide dog

The dog appears to be a labrador, a breed of dog commonly used as guide dogs.

It also looked like it was wearing a guide dog's harness. Photos from Guide Dogs Singapore's Facebook page indicate that the harness on the dog is similar to the harnesses worn by guide dogs here.

The law says it's okay

And just in case there was any doubt, yes, guide dogs can travel on the MRT train.

Here is what the rules said:

“Service animals such as guide dogs accompanying visually handicapped commuters are allowed onboard trains and in train stations. The handler is required to carry a photo identification and this must be produced upon request.

Guide dogs can be distinguished by a special harness worn around the body (See picture on the left for a pictorial example of a guide dog assisting a visually impaired person).”

According to Guide Dogs Singapore, the use of guide dogs on public transport is also permitted under the Rapid Transit Systems Act.