Cleaning up someone else’s mess is never an appealing task.

Even though we've seen the Japanese people do it again and again.

Not many will devote a precious weekend to pick litter left behind by strangers, or very likely, washed onto shore from other countries.

Those who have participated might also be discouraged by the fact that the tides will still deliver new waves of trash from the sea after each and every cleanup.

While volunteers who clean up the shores are likely not the ones who littered the place, neither were the wild animals living on Pulau Ubin.

Worse still, the wild animals are the ones who have to live with marine trash piling up everyday.

Like these critically endangered species of otters found only on Pulau Ubin and possibly, Pulau Tekong.

For example, animals might mistake trash as food as they forage near the coast of Ubin and get stuck by abandoned fishing lines and nets.

Furthermore, there are many more wildlife other than the otters living on this treasure trove of biodiversity, such as the dugongs that are rarely spotted.

Dugongs were once deemed to be locally extinct but have been leaving traces of their visits in recent years on the shores of Chek Jawa off mainland Singapore as they forage in the seagrass meadows.

Let’s help so that more of them will hang out on the island.

Coastal cleanup is more than just clearing trash but a data collection effort too.

Volunteers record the items that are found during a cleanup as Ng Wenyi, an OBS alumnus who is also helping out at this year’s PIAH shared:

“The type of trash we collect (at least for 2018 and 2019) are being collated to aid in further studies of the types of trash around Ubin.”

These data can also help researchers track the movement of marine trash, so as to help design and refine solutions at the source countries to minimise waste.

The cleanup will typically break up into small groups of threes or fours, where one of the teammates will jot down the items that the team picks up on a data card that looks like this. 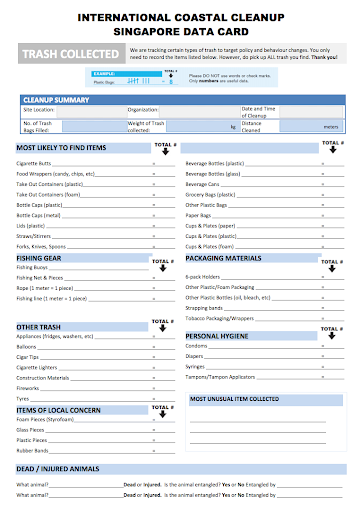 Given the items listed on the card template, you can guess how varied the items can be -- ranging from beverage cans and grocery bags to diapers and condoms.

The 24-year-old Ng, who attended PIAH last year, recalled finding tyres, boats and even sofas along the coastline.

In fact, the number of tyres washed onto the shore is more than what one can imagine.

Some of which are buried in the sand and volunteers have to dig them out together. 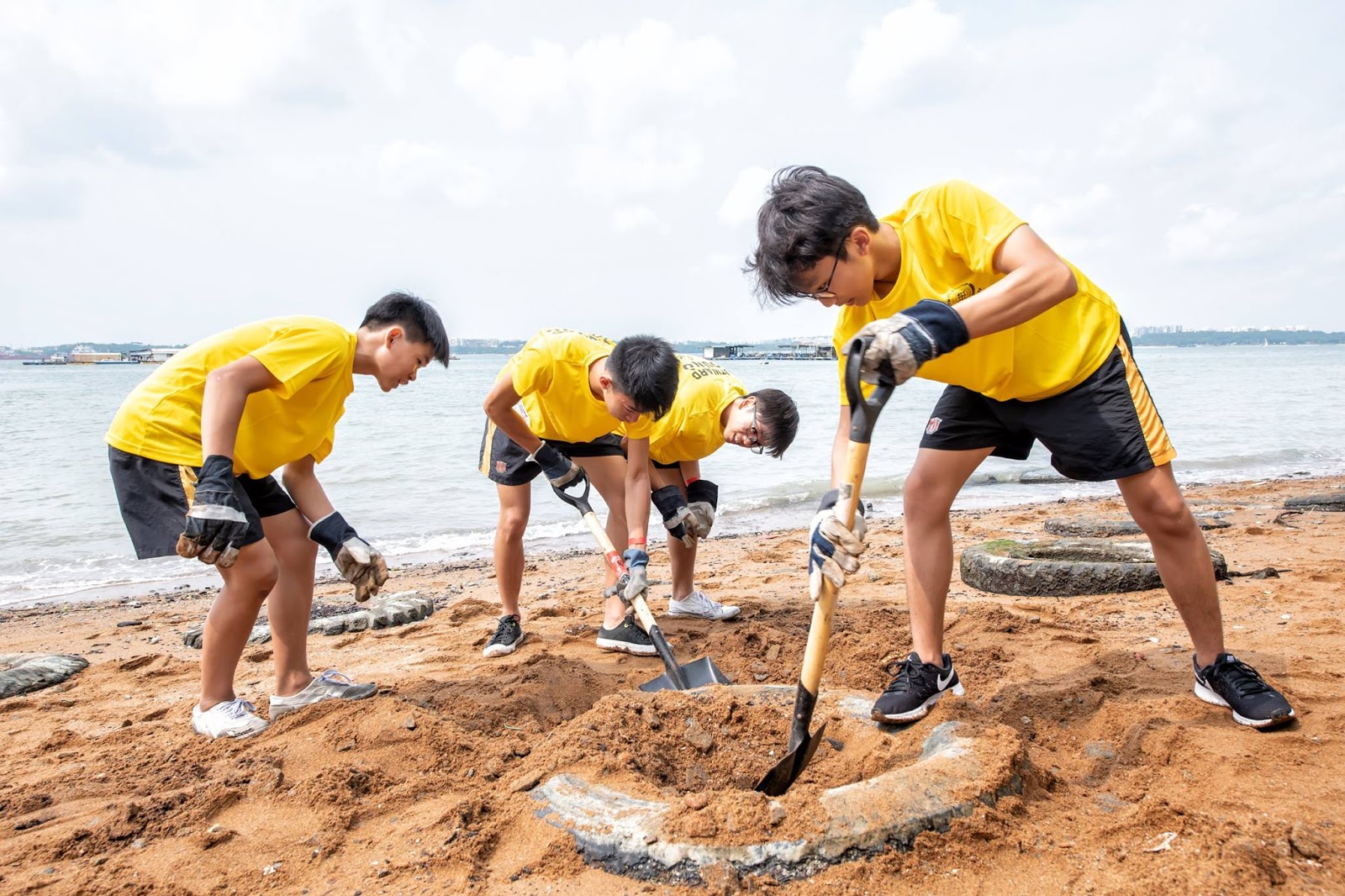 These bulky items also introduce some challenges, and perhaps fun, to the coastal cleanup.

So, if you are looking for a workout, you can lend some muscles here. 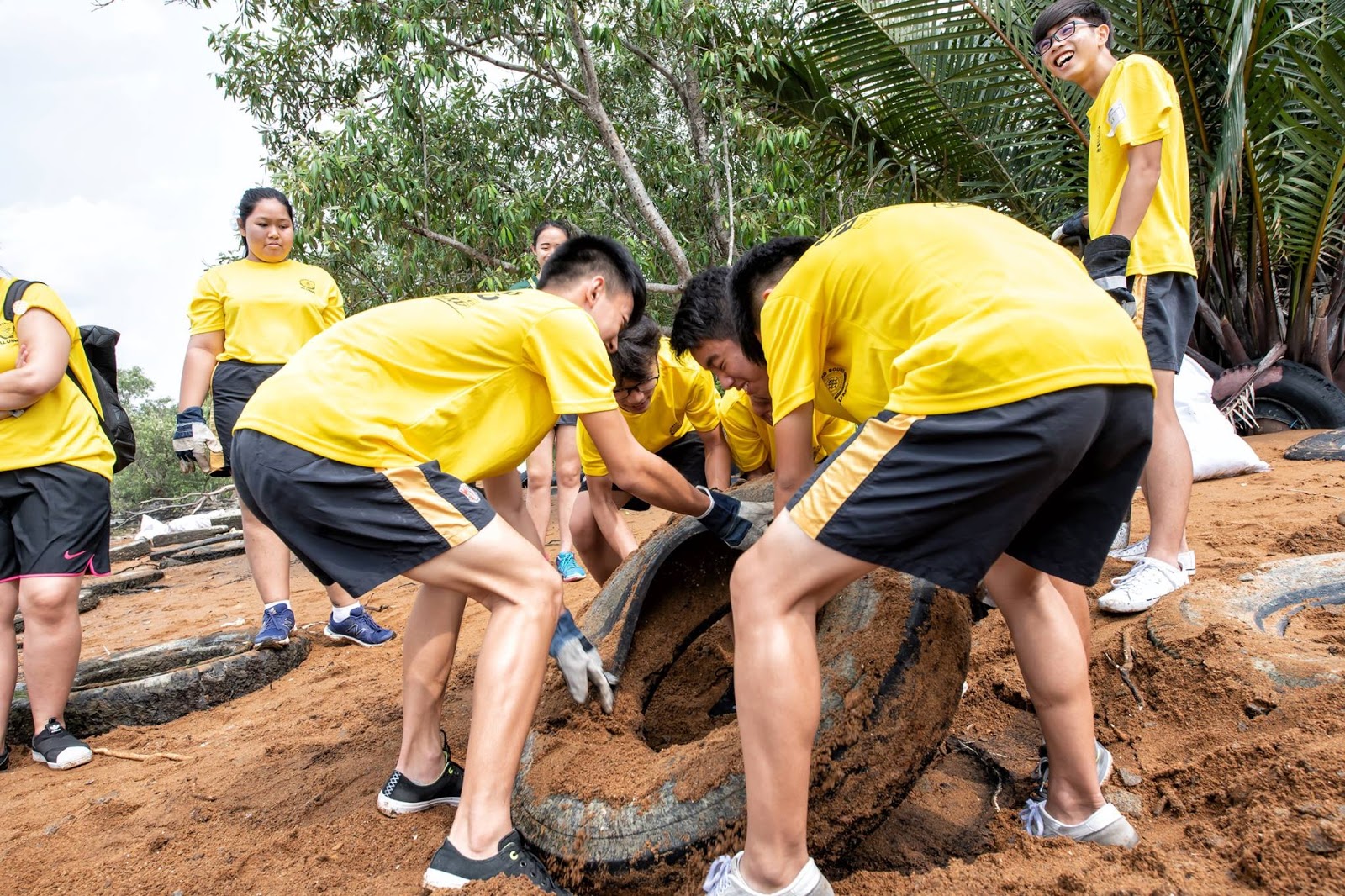 Through the process of collecting and recording trash, it is evident that people produce massive amounts of trash in our daily lives which have a profound impact that is typically out of sight and out of mind. For example, more than 20,000 pieces of litter were gathered by 300-plus coastal clean-up participants in 2018.

The most commonly found items were foam pieces, plastic items that include beverage bottles, bags and packaging.

We are all guilty of being addicted to plastic.

“At the end of it all, the hands-on experience ultimately raises awareness to our participants on the importance of protecting our environment and understanding the adverse effects of pollution on our ecosystem.”

Coastal cleanup is part of a global movement.

Volunteers around the world are doing coastal cleanups in a concerted effort to remove junk tossed out indiscriminately by people into the waters that then wash back up by tides proving that marine pollution is transboundary.

Around the world, not every country has adopted and established an efficient waste management system like Singapore. #ownselfpraiseownself

The only landfill in Singapore has become more like a resort than a wasteland.

Beside mindless littering, dumping of waste into open waters is still a persistent problem in some countries.

We can do more than just not littering as responsible individuals, but also contribute a bit to the global effort to help others to manage and minimise waste too.

Beside coastal and heritage trail cleanups, there are also other interesting activities such as making of birdbox and tree mulching at Changi Beach.

If you are keen to meet like-minded youth and and do their part for the environment, sign up here or check out OBS’s Facebook page to find out more.

This sponsored post is brought to you by National Youth Council who hopes more young Singaporeans can lend their helping hands at OBS PIAH 2019.