Grab will delay the introduction of their new cancellation policy to March 25, two weeks from the initial launch date of March 11.

Mothership.sg understands from Grab that the reason for the delay is because of some confusion about the improved cancellation policy.

The new launch date also allows for Grab to clarify said confusion while giving users more time to adjust to the new policy.

To get you up to speed, the new policy states that cancellations made within five minutes of getting a driver are free.

This is as opposed to the current policy where you will get charged S$5 after the third cancellation in a week.

However, a cancellation fee of S$4 still applies if:

Waiting time surcharges remain, and will apply when the driver waits for the user at the pick-up location beyond the stipulated five minutes.

You will also be able to cancel your booking for free if the driver takes more than five minutes beyond what the original expected time was.

For example, if your driver is indicated to be 3 minutes away and you’ve waited for more than 8 minutes for him, you're able to cancel the ride without a fee. 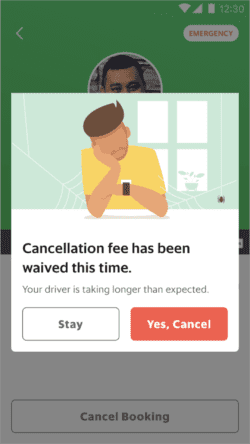 All cancellation charges will be deducted via GrabPay or your credit and debit cards.

If you’re paying by cash, this is added to your next fare, as the driver will be informed to collect the fee for Grab.