One man happened to chance upon an envelope full of S$50 notes while on his way to JB, Malaysia.

Instead of keeping the money for himself, Liu Xinfa took to Facebook in an attempt to find its owner.

In his post, Liu said that he was going back to JB from Singapore when he found the envelope.

Liu wrote that anyone who has lost their money can send him a personal message.

He will return the money if they are able to tell him the exact amount in the white envelope. Response from other netizens

In the comments section, many netizens praised him for his kindness and honesty. 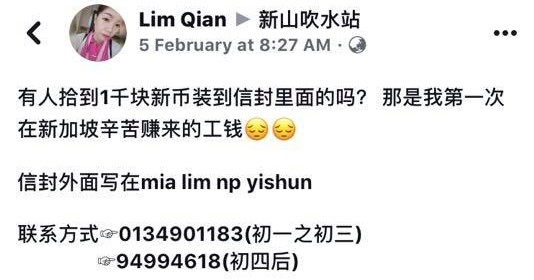 "Did anyone pick up S$1,000 worth of money in an envelope? That is the hard-earned money that I've made in Singapore for the first time. The envelope is labelled 'mia lim np yishun'"

It is unclear if she is the owner of the money found by the man.