A Facebook video posted on Dec. 21 showed a woman running across the road to rescue a seemingly injured pigeon.

A car travelling along New Upper Changi Road in Bedok happened to capture this incident on the dashboard camera on Nov. 27 morning.

This footage was later uploaded to the Singapore Reckless Drivers Facebook page.

In the 38-second video, the pigeon was first spotted on the right-most lane as a lady ran towards it from the pedestrian pavement.

However, the pigeon skipped away from her when the woman first attempted to pick it up.

The pigeon got startled and attempted to move further from her by flapping its wings.

The woman then noticed the oncoming vehicles and signalled for traffic to slow down as the car doing the recording slowed down.

The lady then made her second attempt to catch the pigeon.

However, she did not succeed again as the pigeon escaped and was visibly struggling to take flight.

The lady then took her chance to grab the pigeon on her third attempt.

Fortunately, she succeeded and returned to the pedestrian pavement with the fluttering pigeon in her hands.

Praises for the kind act

The lady put the pigeon's safety before hers as she ran across the road for the rescue.

Although she could be more mindful of the traffic, most praised her for her kind act. 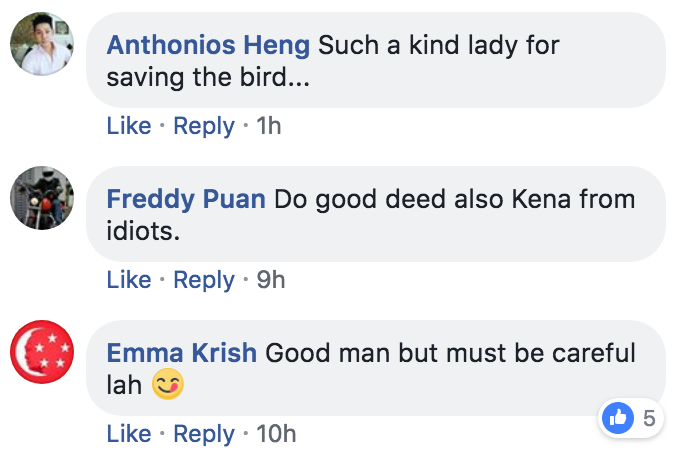