[Update on Dec. 28, 2018: In response to Mothership's queries, the police have confirmed that they were alerted to a case of criminal trespass and insulting the modesty of a woman at Tampines on Dec. 26, around 1am.

A 30-year-old man was arrested and police investigations are ongoing.

This is their statement in full:

On 26 December 2018 at about 1am, the Police were alerted to a case of criminal trespass and insulting the modesty of a woman at 300 Tampines Avenue 5. A 30-year-old man was arrested in relation to the case. Police investigations are ongoing.

The Police treat such cases seriously and will not hesitate to take action against anyone who commit such offences.

Anyone convicted for insulting the modesty of a woman under Section 509 of the Penal Code, Chapter 224, may be punished with imprisonment of up to one year, or a fine, or both.

Anyone convicted for criminal trespass under Section 447 of the Penal Code, Chapter 224, may be punished with imprisonment of up to three months, or a fine of up to $1,500, or both.]

A man who was allegedly caught filming some girls in the toilet had wished his victims a "Merry Christmas" and pleaded to be let off.

The man in question is dressed in a dark grey sweater below: 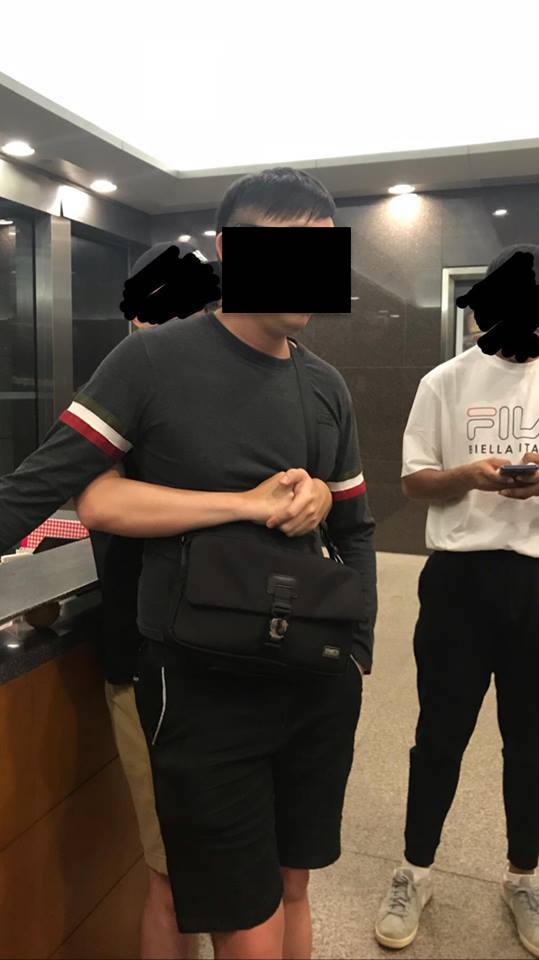 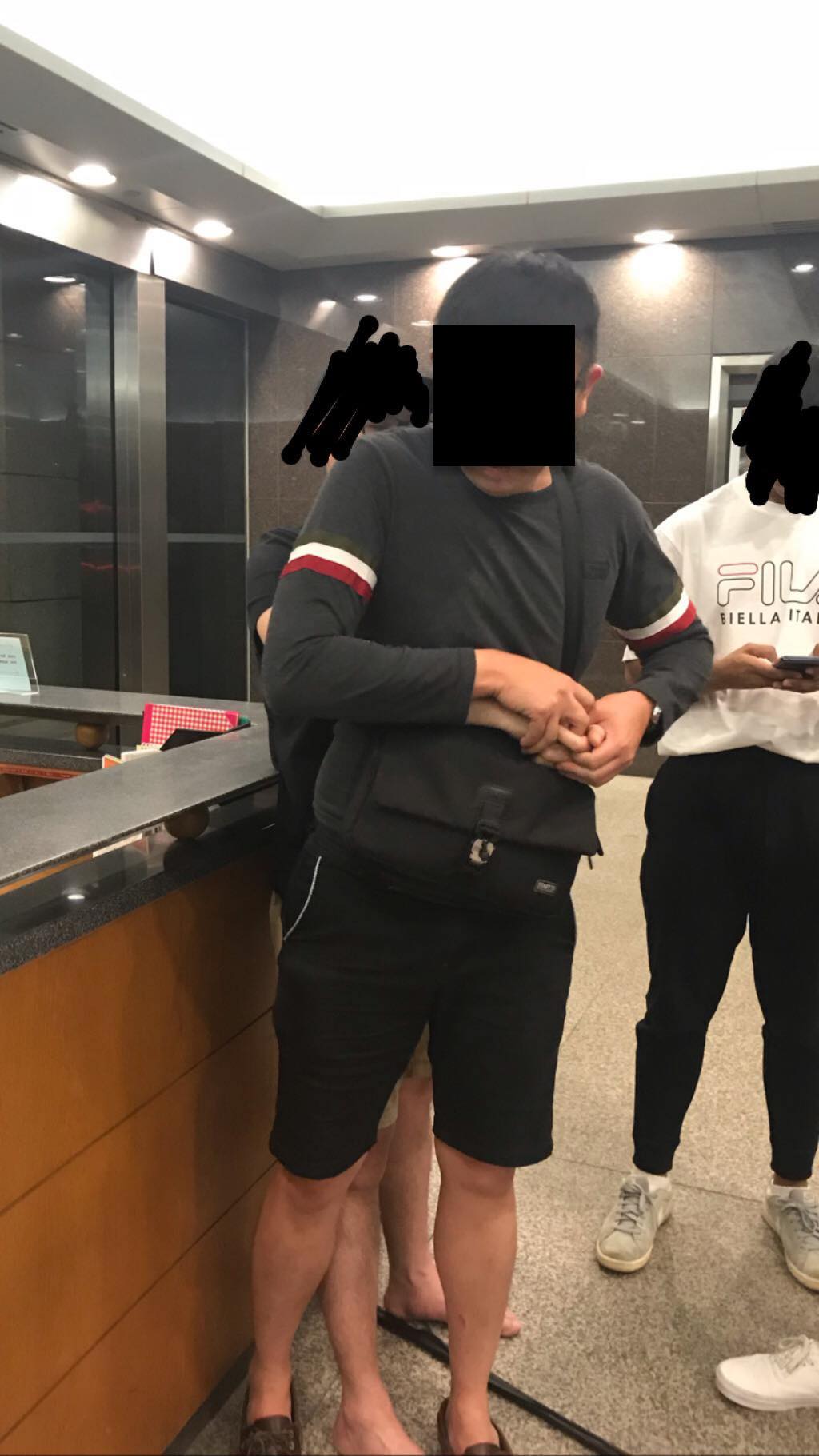 Thankfully, the police were eventually called, but not without a struggle and the alleged perpetrator attempting to escape.

The incident was then shared to Facebook by a woman known as Chong, one of the victims who caught the alleged pervert.

"Sorry sorry please give me a chance... I deleted your videos already."

According to Chong's post, the incident occurred on Dec. 25, at the NTUC Income building in Tampines.

The alleged pervert was hiding in a toilet cubicle, trying to film Chong and her friends as they peed.

When he was caught red-handed by Chong and her friends, the man had come out of the cubicle "wide-eyed" and apologised immediately, saying, "Sorry sorry please give me a chance... I deleted your videos already."

Chong deduced that the man had been hiding in the cubicle for at least an hour.

The women, however, had no intention of letting him go, and demanded for his phone instead as they called the police.

The man then allegedly "manhandled" the girls to make a run for it, but one of their guy friends managed to thwart his escape attempt.

Chong then discovered more than 10 videos of other girls in the alleged pervert's phone.

The victims were undressing and peeing in the toilet cubicle.

At this, the man apologised profusely and even wished Chong and her friends a "Merry Christmas".

Unfortunately, when the police arrived at the scene, Chong found them lacking in empathy as no officer asked about the well-being of the alleged victims.

Instead, they had asked if the accused had verbally confessed to taking the videos.

Chong said the question was an affront to good sense:

"We had hard evidence from his phone, CCTV footages and eye witnesses who heard him apologising about his actions and caught him red-handed trying to record in the ladies bathroom. Not enough evidence meh?"

Furthermore, an officer allegedly added that depending on the investigating officer, the man might be let off with just a warning.

However, Chong thinks that such a light punishment will only encourage perverts across the country:

"Honestly, Is this the message we are trying to send to all perverts across the country? That's the first step to emboldening and endorsing their behaviour. Do we really have to wait till something major happens and then we take action? Who is going to be responsible for our trauma and the mentally stressed situation that happened to us and all the victims? Yeah it may seem like NOTHING but try being in this situation. I am so sick of these perverts who think it is totally fine to do such things and get the f*ck away with it."

We have reached out to the Singapore Police Force and will update this article if they reply. 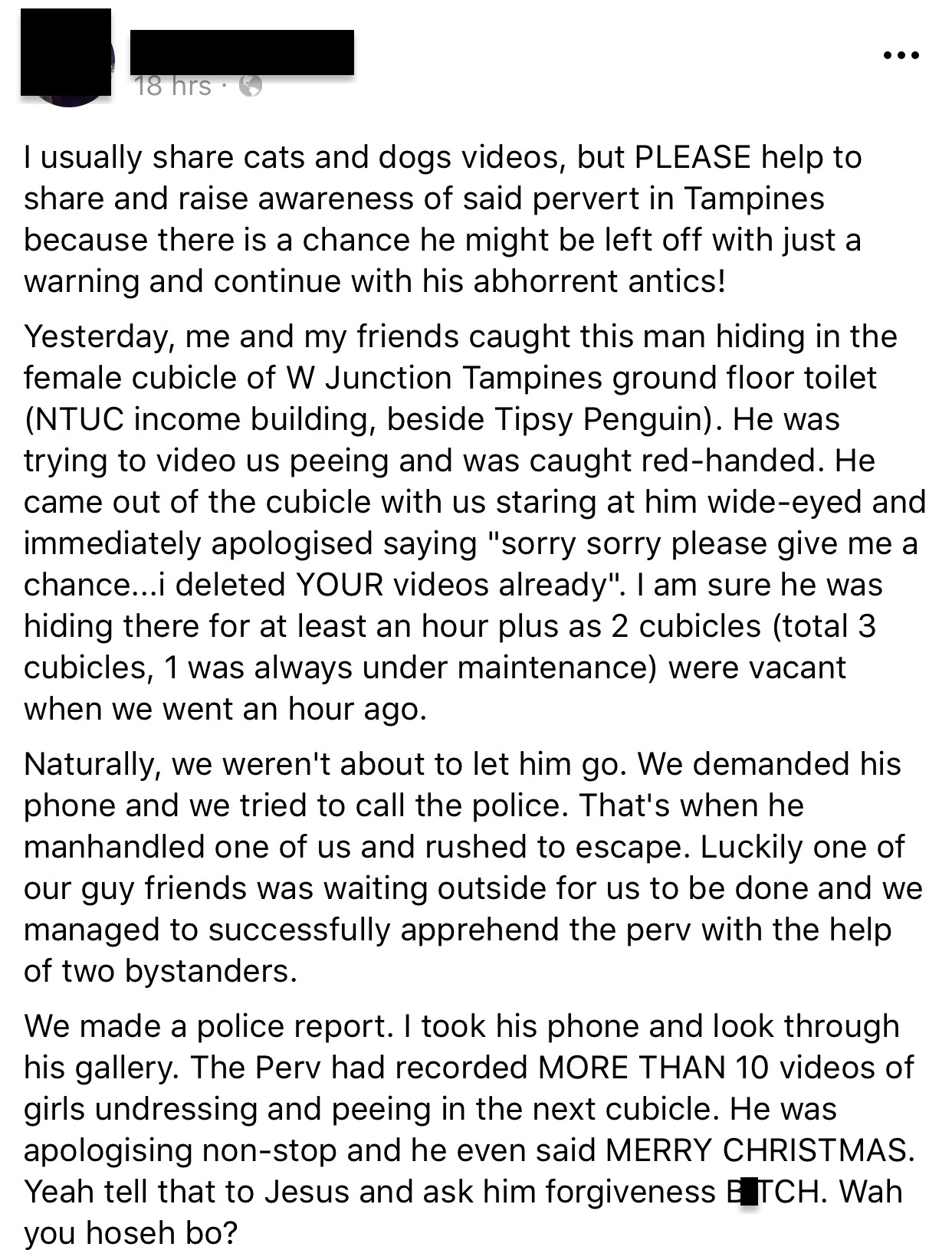