Singapore has its very own human spring.

His name is Koh Chen Pin, also known as CP, and Denester.

At just 25 years old, he has accumulated 11 years of parkour experience.

And the thing about CP is that he might look like he has a diminutive build, but once he gets into his parkour element, he is almost nothing but potential and kinetic energy, and a lot of quick-twitch muscles, rolled into one waiting to blow.

At 163cm, he packs an explosive punch.

A parkour practitioner is also known as a traceur or freerunner.

It is a sport that combines freestyling with calisthenics to overcome the obstacles in an urban environment. 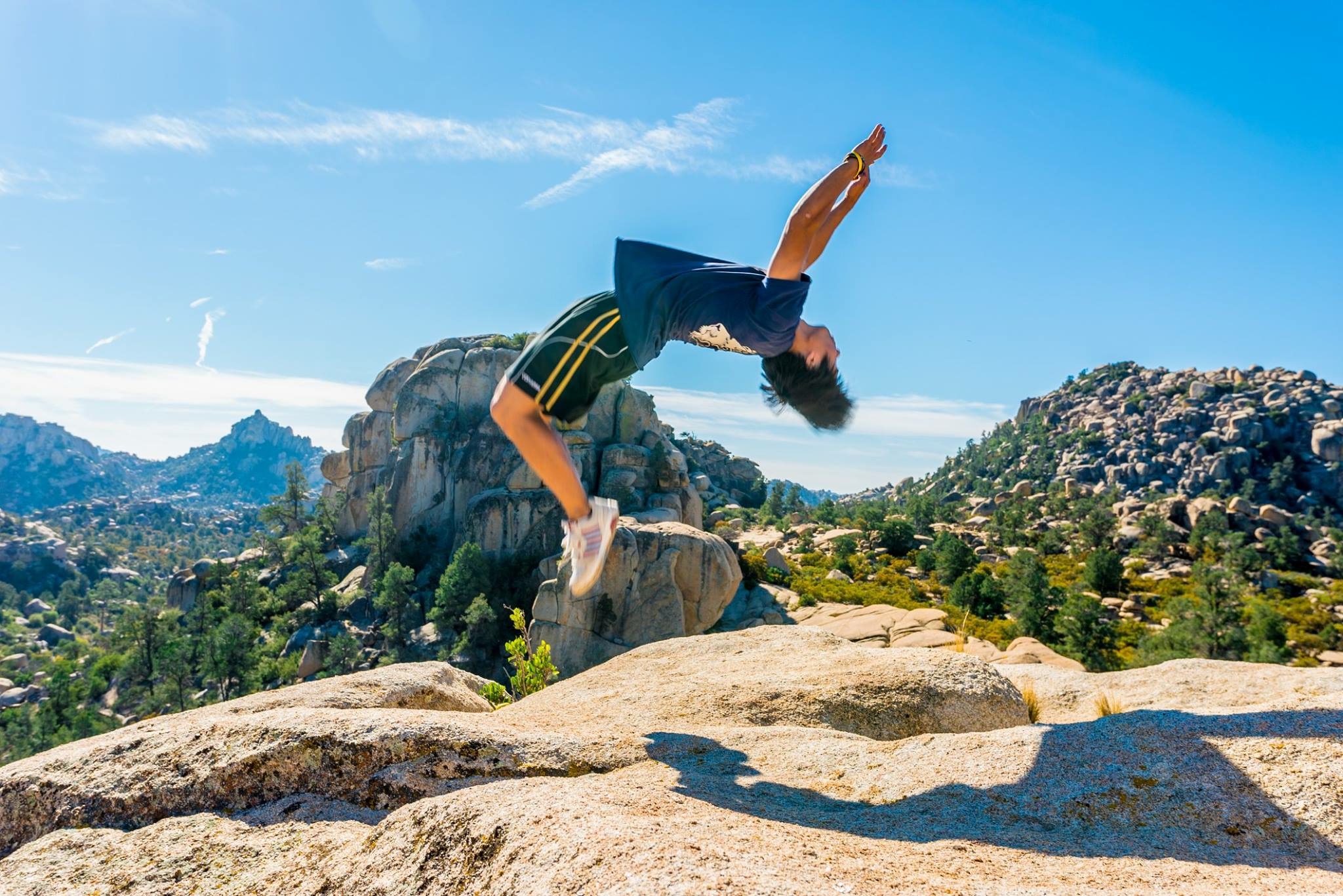 The running part of the name is a bit of a misnomer, because most of the time, practitioners are flipping out like ninjas, looking almost like it is effortless.

But a lot of what they do is down to getting the techniques right and honing their instincts, because no one wants to kill him or herself each time they land.

And not everything you see on video about the sport is spontaneous.

Plenty of times, moves are thought out in advance, charted out and fine tuned, and there is a need to study the environment to plan on what to do before executing it.

In Singapore, parkour's following is niche but largely male -- not surprising since even males find it tough to learn the moves, let alone master them -- a process that can take two years for anyone starting out with a blank slate.

"I'm not in pain. I feel like my body is in the fittest stage," CP casually said in response to queries if there's a possibility he is in pain all the time because of how intense his moves are -- frequently somersaulting and going head over heels literally.

As his videos on his Denester Facebook page and YouTube channel have been watched hundreds of thousands of times by Singaporeans and people overseas, the natural question able-bodied Singaporean males have is: Can he jump over the the full length of the standing broad jump mat?

CP said without any hint of boastfulness: "I did 292cm for standing broad jump. I haven't been able to get past the mat. But I can make it to 300cm if I practised."

And what about National Service and doing the standard obstacle course (SOC)?

"NS was pretty much a breeze. What it focuses on is stamina and endurance. For running, I must admit I am not the fastest. That was my main struggle," CP said in a pretty chill voice without dissing anyone, like he eats exercise for breakfast.

"SOC was quite easy. My parkour skills definitely helped me with it. It's just different kinds of strength."

Just to give a sense of how crazy CP is about parkour, or rather, how naturally it comes to him like he was born to do it, the idea of not training enough during NS consumed him on weekends.

"The intensity of parkour training is a lot more than in NS," he also revealed.

In 2015, CP flew to Nanjing in China when he was just 22 to take part in X Warrior, which is China's version of Sasuke, also known as Ninja Warrior.

You can watch the footage CP edited and slapped together here on how well he overcame the obstacle courses.

He didn't exactly complete it, but for any able-bodied male, watching it will give you a good gauge of what parkour does to your body.

For the record, CP said his max number of pull ups he can do is 21.

He elaborated: "I don't train for a lot of repetitions. Focus on strength not endurance."

Overcoming pain appears to be part and parcel of the sport too.

According to CP, sustaining ankle, shin and wrist injuries is common in parkour.

But he has not encountered a career-ending injury -- even though he did fall two storeys before when he failed a jump.

Once, a wrist injury put him out for three months before and he just took a break from the sport.

No surgeries, no fractures, whatsoever so far though.

Now that he is busy with coaching and busier with adulting (i.e. paying bills), he is not training as often, resulting in his body feeling like it is at its fittest as he has more time to recover.

Got in trouble with the law

CP also said his willingness to showcase the sport these days as something more than fringe or too physically impossible is down to how parkour is beneficial.

Which is true, given how aunties in Singapore are also doing parkour -- but at a non-ninja level.

Trying to win his own mother over initially in his secondary school days is a thing of the past now, as CP has shown what he can do with his coaching and commercial gigs these days. He has been in Uniqlo ads flipping out to demonstrate how their apparel is suited for this kind of thing.

The bigger hurdle since those early days was overcoming the law recently.

CP and his friends were involved in a trespassing case after they got to the roof of Eastpoint Mall in Simei.

Regarding that episode, CP said he regrets his actions: "I understand that it is totally not a good enough excuse to trespass. It is a big mistake. I just want viewers to know this is not what parkour is about."

He said his intention was just to take photos and videos of parkour from a different perspective.

And as someone who has earned his stripes over the past decade and more doing parkour at the highest level, he said the sport has a lot to offer: "There are many negative impressions in the media, but that's not what I want parkour to be known for."

Parkour Singapore is a community where anyone can go to learn the sport in a safe environment.

CP, who is a coach at a parkour gym, has seen his share of young individuals giving the sport a try.

Like this kid in Singapore, who looks absolutely fearless:

CP said it takes about two years to get comfortable, but some people start out for six months and they get very good at it because they have had basic conditioning in the past.

As to whether this sport can break out beyond the male machismo crowd or if it attracts girls, CP said: "To be honest, I don't know if parkour attracts female attention or anything, but it makes me a more confident person because of what I do, because I am passionate about it. And maybe girls like such character in men."

As for costs, the gym currently prices 10 one-hour lessons for S$200, or S$250 for a monthly membership for unlimited lessons.

The first class is free.

Parkour Singapore also hosts monthly jams every last Sunday of the month -- free workshops are held then -- to let the public get a feel of the sport.

At the end of the day, CP believes it boils down to training and not making excuses.

He said he makes up for the height difference a good deal with his power.

"If I cannot do it is not because it is my stature. It is because of my technique or I never try hard enough."

Check out a video he did previously: