Singaporean social media was alight on Saturday after it took notice of a very inflammatory-looking post uploaded on Friday.

The Facebook post, by one Joel Tan, shows this picture of what appears to be a Chinese man dressed in a turban and false beard:

In his post, Tan alleged that he was told the following:

It was not clear from his post whether it was the man who dressed up who did these things or not.

The man who dressed up was subsequently identified by two separate sources to Mothership as Singapore Sports Institute (SSI) chief Toh Boon Yi, who took the helm of SSI in 2016.

However, the reactions were near-instantaneous: 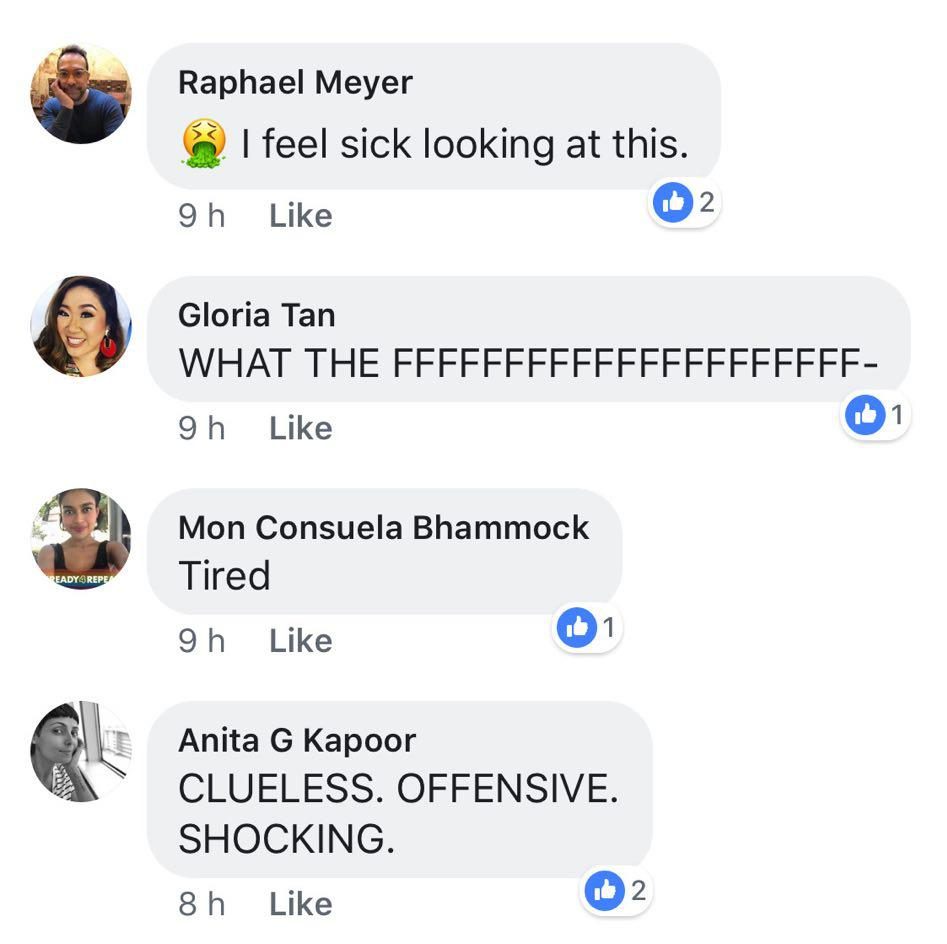 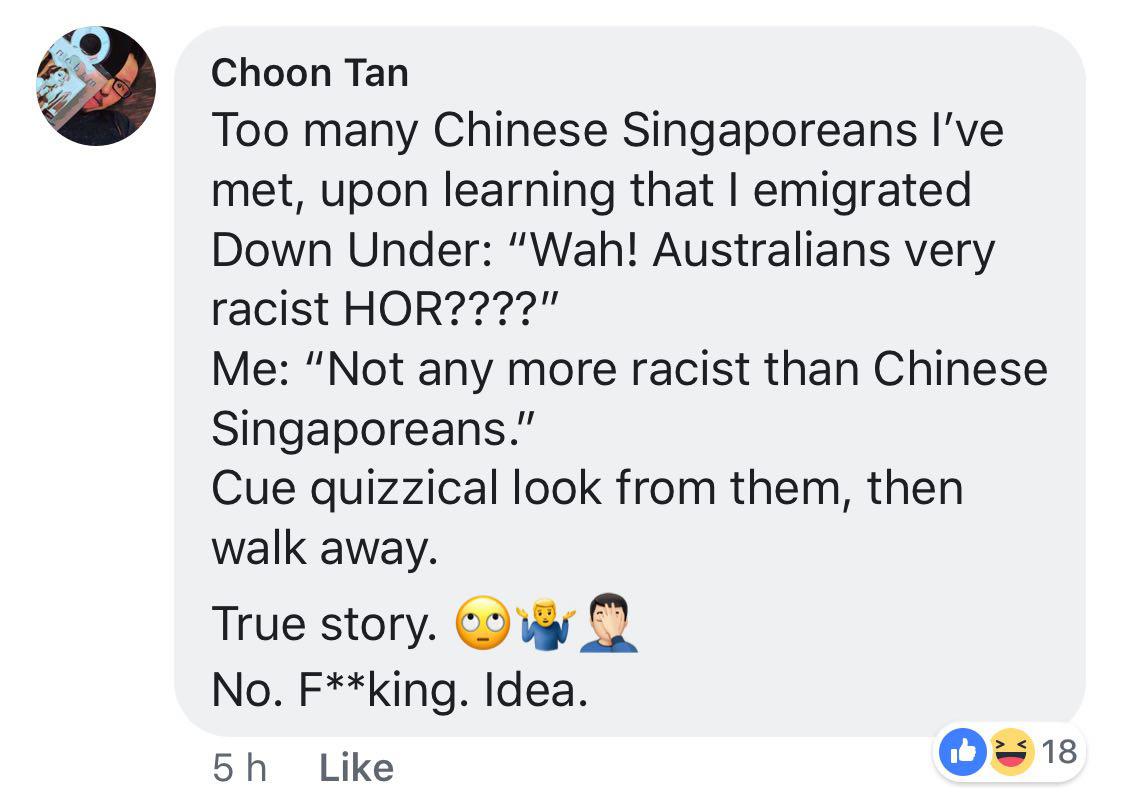 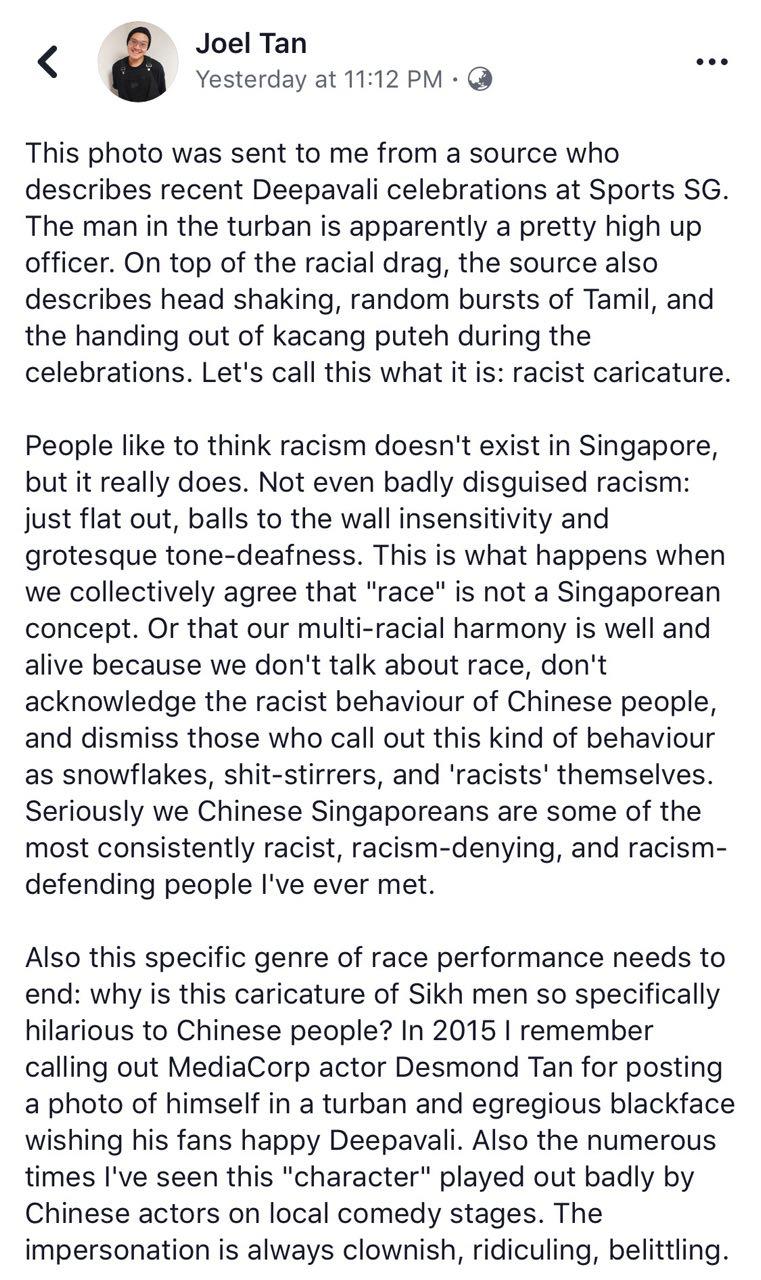 Responding to Mothership on Saturday evening, a spokesperson for Sport Singapore apologised to people who were offended by the image of Toh.

He confirmed that the event was indeed an internal staff celebration that Sport Singapore does annually for its Indian staff, and that apart from Toh, who was dressed up by his team of party organising staff as an Indian kacang puteh man to greet people at the door with a simple "Vanakkam" ("hello" in Tamil), it had several other activities aimed at celebrating and educating Sport Singapore staff on the various aspects of the festival of lights.

The spokesperson added that Toh's caricature of the kacang puteh man was not intended to be disrespectful or poke fun at anyone, but to "create a celebratory and appreciative atmosphere" among Sport Singapore's multi-racial colleagues.

"We would like to sincerely apologise if any of this has caused offence to people who have seen the posts on social media without the benefit of understanding the context."

The spokesperson's full statement is here:

"We are aware of a photo taken during our annual Sport Singapore (SportSG) Deepavali celebration circulating on social media.

The event was organised by staff to celebrate Deepavali with our Indian colleagues. The event encompassed both cultural and fun elements that included a sharing of the origins of Deepavali, learning about mindfulness and treats of traditional Deepavali goodies. There was an energetic group dance competition and pageant, where people were encouraged to be attired in both traditional and fancy dress.

The staff captured in the photo was dressed up by his colleagues in a sarong, towel head wrap and a beard, and asked to serve Deepavali snacks. He gave a traditional “hello” greeting in Tamil as staff arrived for the event.

The caricature of a kachang puteh man was neither intended to be disrespectful or to poke fun at others. If anything, the intent was to create a celebratory and appreciative atmosphere amongst our multi-racial colleagues.

We would like to sincerely apologise if any of this has caused offence to people who have seen the posts on social media without the benefit of understanding the context."