An Australia-based Singaporean is doing some Medusa magic overseas as he is figuratively growing another head after getting one cut off.

Alex Tan, the founder of States Times Review has posted an update on Facebook declaring that STR is dead -- but not before announcing that he has helped set up a new website called Singapore Herald.

How Singapore Herald came about

• A Toronto-based reader informed Tan that he is willing to continue STR.

• Tan declined and warned the reader about endangering him and his family by trying to keep the site going.

• Tan claimed the anonymous person, who is younger than him, "holds dual citizenship in Canada and Singapore" and has no qualms running the site.

• Tan then absolved himself of any responsibility by saying he has no editorial rights, nor is overseeing the technical aspects and back end maintenance.

According to WHOIS, which records the registrant responsible for a domain name or an IP address, the website www.singapore-herald.com was created on Nov. 10, 2018.

This was barely one day after access to STR by visitors from Singapore IP addresses were blocked by the authorities here on Nov. 9, at around 9pm.

There are no other details about the registrant responsible for the Singapore Herald site, other than indicating that the server is hosted in Burlington, Massachusetts.

The Singapore Herald Facebook page is active and has since published articles that look and read just like STR.

In the comments section of the Facebook post, Tan said he did not meet the person who is running Singapore Herald as they have only communicated over Skype.

Tan also said he is prioritising his family over running the STR site as he has "a newborn baby girl".

The post also said Tan is permanently settled in Australia with a new citizenship, and has no intention of returning to Singapore. 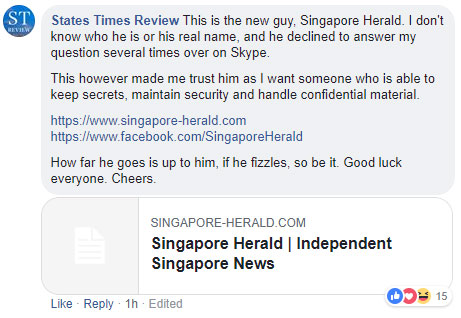 The name Singapore Herald is not new.

The Singapore Herald was once the name of a tabloid newspaper in Singapore.

It had its publishing license suspended by the Singapore government on May 28, 1971.

The government had accused the paper of being involved in "black operations", of being funded by questionable foreign sources, of working up agitation against national policies and institutions, and of "taking on the government".