As news of Heng Swee Keat being the likely fourth Prime Minister of Singapore disseminates to the rest of Singapore over the weekend, the local media is already in overdrive publishing stories about the life of our nation's potential fourth prime minister.

So what are non-local media saying then?

The foreign media, which are not obliged to toe any official line, have cast the spotlight on the challenges facing Singapore in the future, and how Heng will manage them.

Almost all the overseas coverage on Heng has been positive so far. Even the South China Morning Post's slagging was not one many would take seriously — they mentioned Heng's lack of height as his weakness.

Here goes (click on headline link to go to article):

From death’s door to Singapore PM-in-waiting

"It was Mr Heng’s long public sector experience — he was the oldest among the three main candidates to be the next prime minister — and relative popularity among Singaporeans that won him Friday’s appointment.

... it was Mr Heng’s tenure as the managing director of the Monetary Authority of Singapore — the city state’s de facto central bank — during the global financial crisis of 2007-08 that is seen as the high point of his career."

"Harvard-educated Mr. Heng is seen as a safe bet on continuity for government policy at a time when Singapore seeks to tread a narrow path of neutrality in international affairs and maintain its prominence as an important Asia-Pacific financial hub...

Domestically, Singapore’s political leadership faces growing clamour from an ageing population increasingly demanding of consultative, rather than top-down, leadership—a trait for which Mr. Heng is known and which also differentiates the PAP’s younger leaders from its old guard...

Mr. Heng is a thoughtful leader and careful politician who values consultation and attention to detail, said a person who knows him well."

"The appointment alleviates some of the anxieties within the city-state over its leadership succession. Lee, who became Singapore's third leader in 2004 after Lee Kuan Yew, his father, and Goh Chok Tong, has expressed an intention to step down over the next few years...Among the younger ministers, Finance Minister Heng is seen as a key contender for the top role, thanks to his experience in forming economic policies."

Singapore finance minister gets key party post, seen in line to be next PM 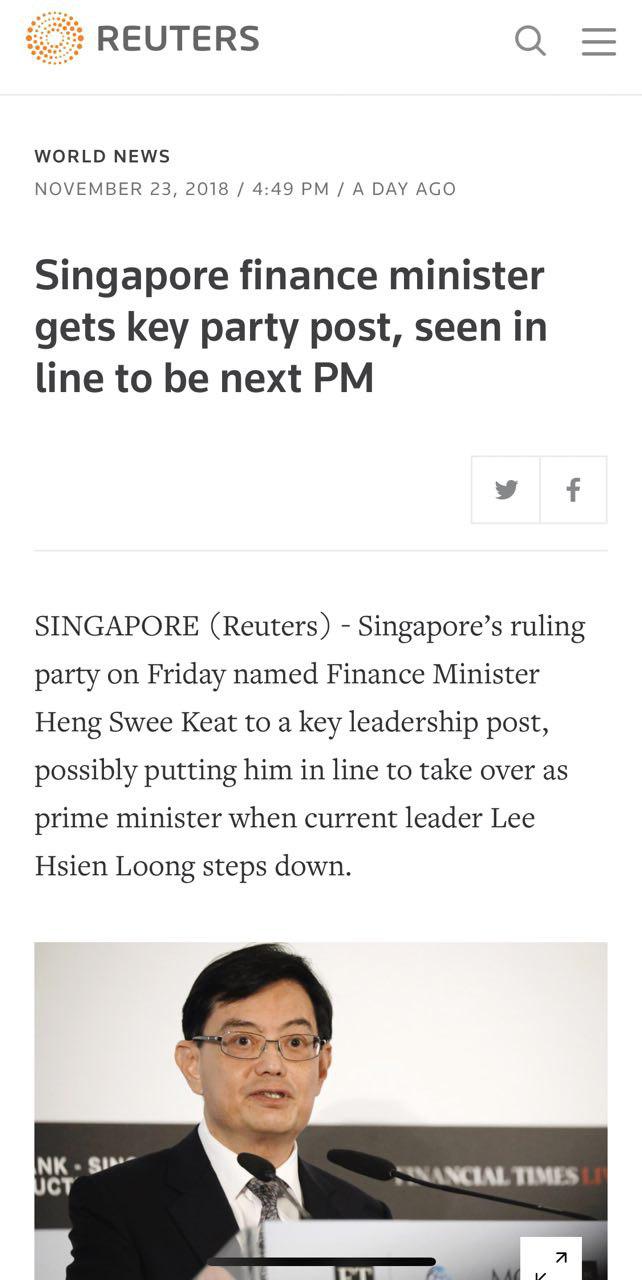 "Heng, 57, was one of three ministers tipped this year to succeed Lee, 66. He is the most experienced of the leading candidates but concerns about his health after he suffered a stroke and collapsed during a cabinet meeting in 2016 had raised questions about his suitability." 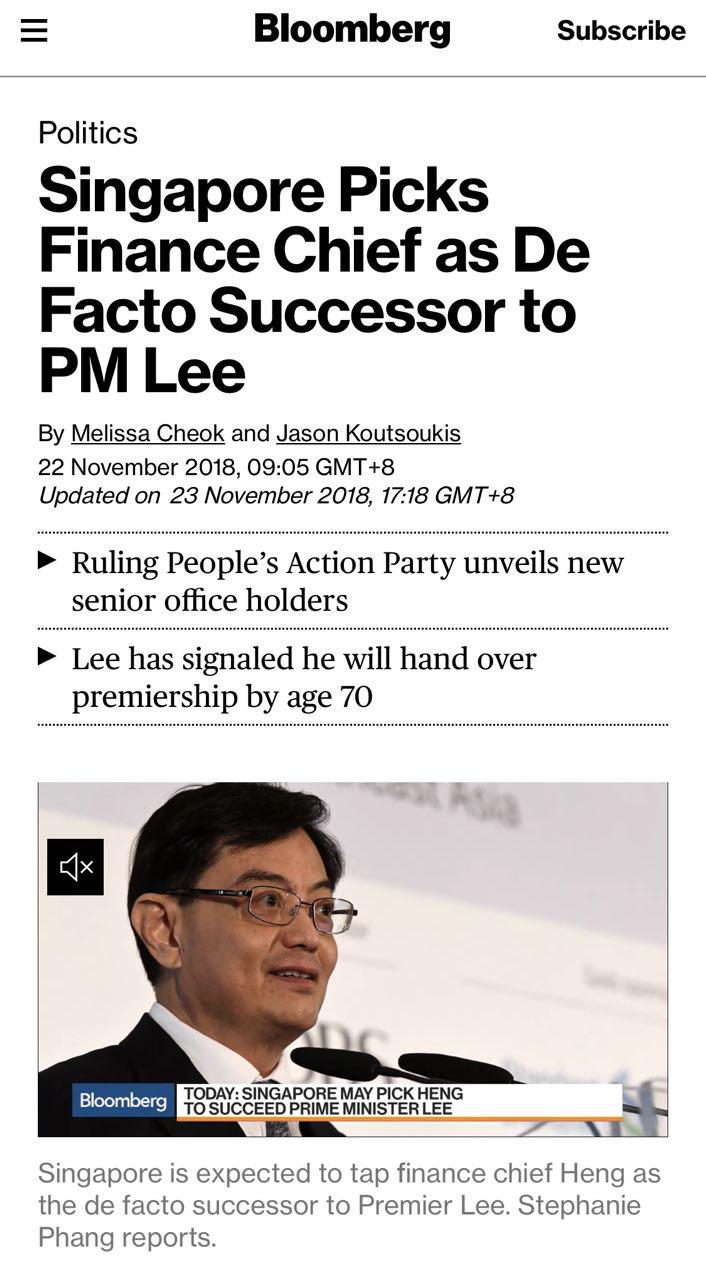 "In an interview with Bloomberg Television’s Haslinda Amin earlier this month, Heng said any new cabinet would have to be fully committed to working closely with the country’s partners all over the world and looking into the well-being of Singapore and its citizens. He said the city-state may need to review its 2019 economic growth projections due to uncertainty over trade."

"He is of slight build, his large eyes are framed by wire rim glasses that make them look larger still, and his thick, black hair is swept to the right. In speeches, he is measured and reassuring; in person, sincere...

So Heng’s only flaw, if one can call it that, is his stature, as Singapore’s founding father Lee Kuan Yew described. In his book One Man’s View of the World, he praised Heng but added: “The only pity is that he is not of a big bulk, which makes a difference in a mass rally.