The Agri-Food and Veterinary Authority (AVA) has launched a public consultation seeking feedback on a proposed complete ivory ban in Singapore.

This means that it will be a crime to buy or sell any ivory anywhere in Singapore.

They're giving members of the public one month (November 27 to December 27) to submit their feedback on the issue — perhaps because it doesn't feel it should come to a decision on its own as the government has been saying this since as early as March last year:

According to the AVA, Singapore has banned the international trade on all forms of elephant ivory products since 1990.

However, any ivory product imported prior to 1990 or acquired prior to the inclusion of the relevant elephant species listed in the Convention on International Trade in Endangered Species of Wild Fauna and Flora (CITES) can still be traded and sold.

This latest proposal to implement a complete ban on all ivory products is in line with Singapore’s broader commitment to tackle the illegal elephant ivory trade and support elephant conservation, it said.

But does this decision actually require a consultation?

That was pretty much what most Singaporeans responding to this exercise said, expressing in various ways their strongest support for the total ban. 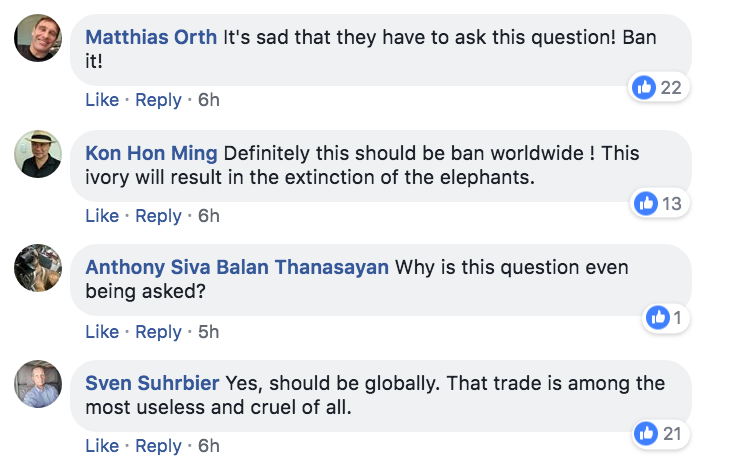 However, there were a few who questioned the implications of doing so, like the potential creation of an ivory black market, and the ivory that is carved into religious artefacts and holy objects:

Others highlighted other wildlife trades driven by human consumption, such as shark's fin and rhino horns, that should also be banned.

If you have feedback regarding the proposed ban on ivory, please submit it by Dec. 27 at noon via the following channels —

You can either email them to [email protected], or snail mail it to: