This must have ranked as one of the swiftest replies by a civil servant.

Sunny Lee, Press Secretary to Minister for Home Affairs K Shanmugam, told the media on Sept. 5 evening that the minister stands by the comments he made on Sept. 2.

Shanmugam told the media at a grassroots event that it is an "absolute no-no" for Singaporeans to invite "a foreign politician to intervene in our domestic politics".

Lee emphasised that while Singaporeans can debate vigorously on issues within Singapore, "a red-line is crossed when one invites foreign powers or foreign leaders into Singapore politics"

Lee's swift reply to the media on Wednesday evening was in response to what happened earlier that day.

Three of the four Singaporeans who met with Malaysian Prime Minister Mahathir Mohamad announced publicly that they have written letters of complaint about Member of Parliament Seah Kian Peng's allegations against them.

Historian PJ Thum and activists Kirsten Han and Jolovan Wham sent the letters to Prime Minister Lee Hsien Loong in his capacity as the Secretary-General of the People's Action Party, indicating that Seah's allegations are unbecoming of a PAP MP.

The letter was also sent to Charles Chong, chairman of the Select Committee on Deliberate Online Falsehoods as Seah is a committee member.

PM Lee, as revealed by Shanmugam's Press Secretary, subsequently referred their letters to the Home Affairs Minister, who is Shanmugam himself.

Lee said that the purpose of the letter was to "divert attention from the conduct of the writers".

Lee added that while Shanmugam has no desire to prolong this matter, he would nevertheless respond to their complaints, to put the facts on the record.

Below are the facts as stated by Shanmugam's Press Secretary:

Thum did the following:

i) Invited Mahathir to "take leadership in Southeast Asia for the promotion of democracy, human rights, freedom of expression and freedom of information".

ii) Invited Mahathir to address a conference about promoting democracy in Southeast Asia.

[Editor's note: Han informed Mothership.sg that point ii) was inaccurate. It was Tan and Hishammudin who invited Mahathir to address a conference, not Thum, Wham or herself. She added that she had repeated the clarification in her response to Seah's first Facebook post.]

iii) Posted a photo of him presenting his book, about politics in Singapore, to Mahathir. 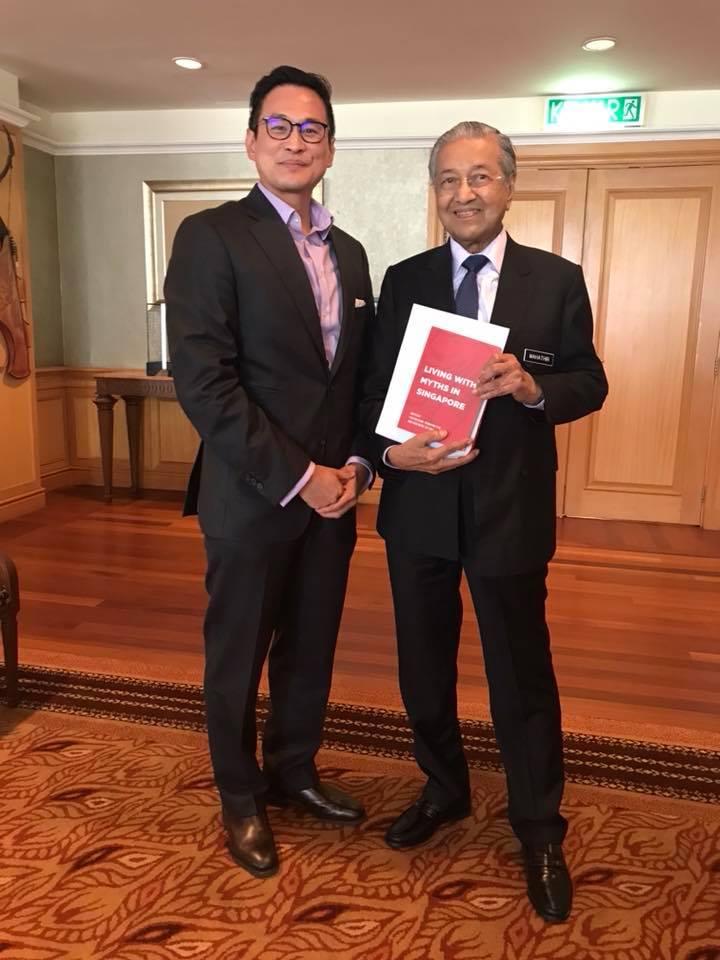 (2) Tan, a former Singaporean and a fugitive from the law, gave an interview after the meeting, also expressing the hope that Mahathir and Malaysia could influence politics in Singapore.

(3) Wham has asked “what’s wrong” in Thum asking Mahathir to bring democracy to Singapore, and that "[i]nternational political pressure IS part of activism".

(4) Thum believes that Singapore should be part of Malaya and declared that it was his "fervent wish" that Singapore "will one day return to our rightful place alongside our brothers and sisters in Malaya".

He has also made several other posts, to similar effect, about Singapore being part of Malaya.

Shanmugam's Press Sec said the activists' actions were not patriotic

Lee said that while the activists claimed that they are patriots, he believed that it was not "patriotic to invite any foreign leader to intervene in Singapore politics, especially the leader of a country who has declared his desire to increase the price of water to Singapore by more than ten times".

In response to media queries, an MHA spokesperson advised anyone who receives death threats to make a police report, adding that they will look into the matter accordingly.