A Singaporean student at Nanyang Technological University (NTU) has taken to her Instagram account to speak up on a number of sexual harassment cases that happened to several female students on campus.

"We won't say no to good views"

It appears the conversation took place earlier this year.

In the conversation, A told Jen that she could see her bra as her shirt was very "revealing".

A then said she talked about it with a tutor, B, who also, according to A, had to "remind himself to keep his eyes" on Jen's face. 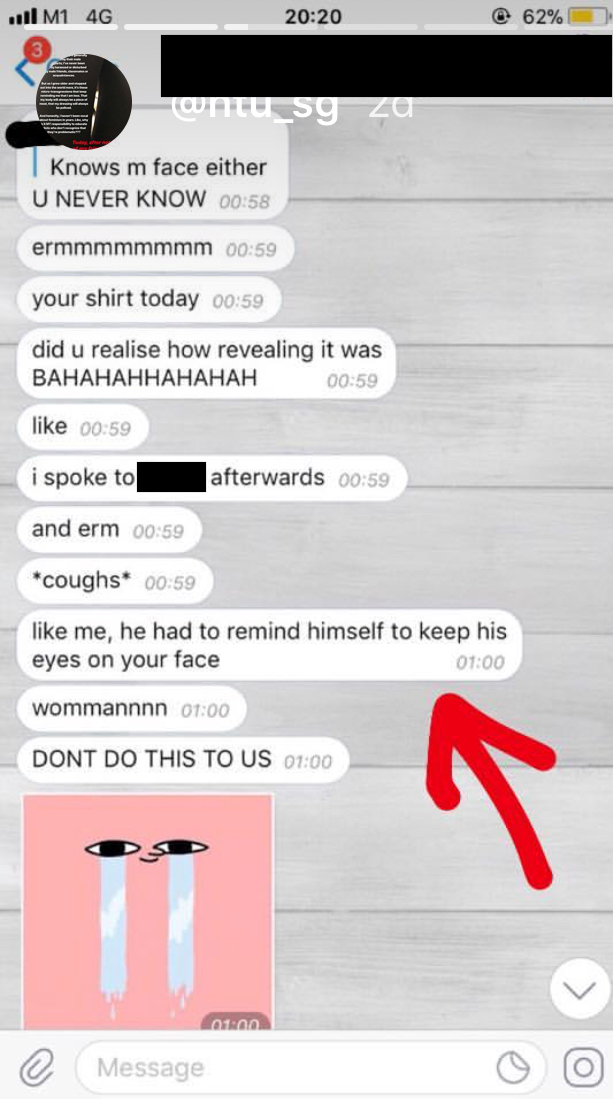 A also claimed she and B agreed Jen's bra had a patterned design.

Subsequently, after telling Jen to not "do this to [them]", A asked Jen if she was wearing "white panties": 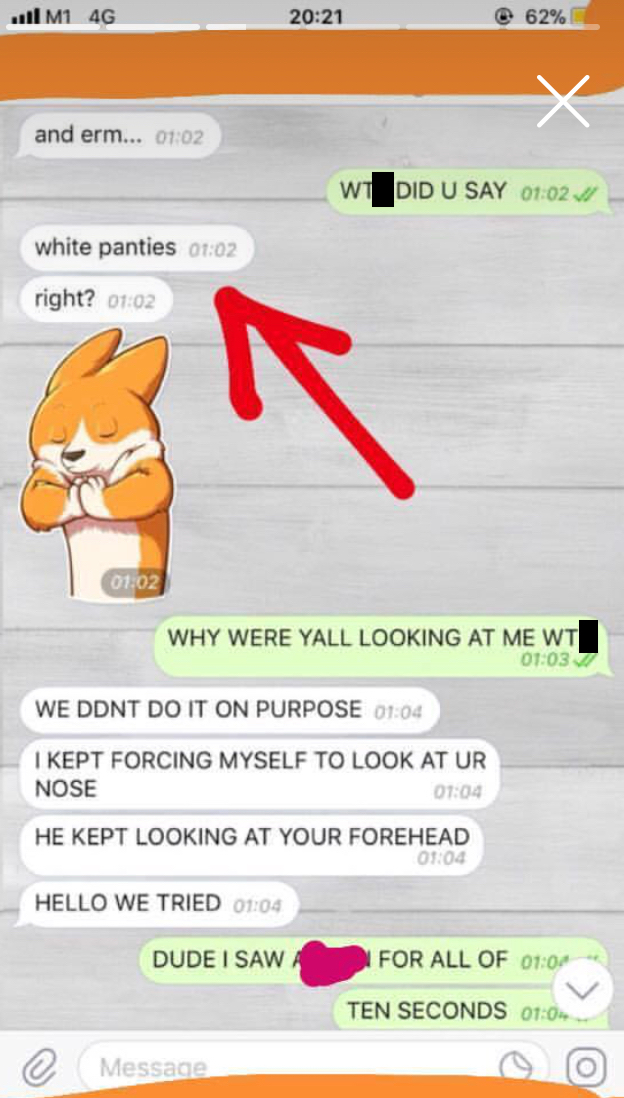 The conversation then took an even stranger turn.

Despite saying they "did not do it on purpose" and that they tried not to look at her chest, A later said she had "no objections to her dressing" as they "won't say no to good views". Later, when Jen did not respond, A sent another text message roughly 16 hours later that said: "Dude how was it".

According to Choo, Jen sent these screenshots to NTU's Student Affairs Office (SAO) in a formal complaint.

Choo also posted a screenshot of what she said was an email response from the SAO to Jen: In the email, the SAO said it had spoken to both A and B and had given the former a verbal warning, noting that A claimed that B was not "part of any conversation".

They also planned to send A a letter from the Chair of the School of Social Sciences (SSS) reprimanding her for the "unhappiness" she had caused, adding that she is required to attend "a compulsory 6-month counselling".

They ended the email by saying they hope Jen is not "emotionally affected by the matter".

Subsequently, Choo gave her thoughts on NTU's response, saying she and Jen were not satisfied with the way NTU handled the case. 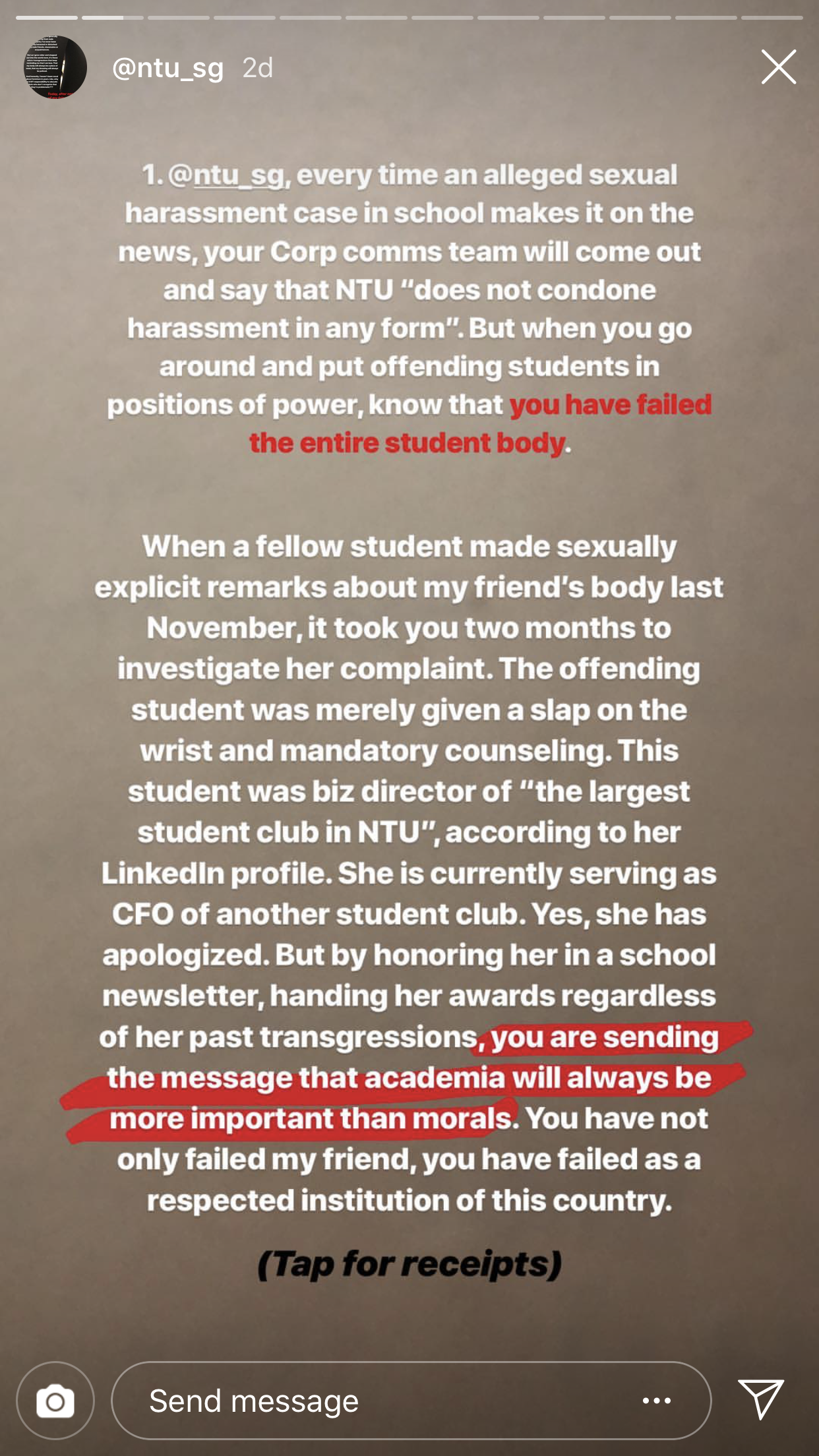 Responding to Mothership's queries, NTU said it places utmost importance on the safety and well-being of its students, and allegations of harassment in any form are taken seriously.

In a statement, it said it treats each case with confidentiality and has always "encouraged students to speak up and report any wrongdoing without fear of negative consequences", although it "understand(s) why students may be reluctant to do so".

It outlined various official university channels students can pursue to address their complaints, such as through their respective schools or the Student Affairs Office, which it said has investigated and taken action on cases previously, "even before a formal complaint was made".

"Every case is followed through with student safety and well-being in mind – and if affected students wish to pursue the matter further, they continue to have access to the various channels."

NTU has also tried to make clear to freshmen and senior students that "any form of harassment goes against the spirit of a university".

"No student should begin university life by experiencing fear and keeping silent about harassment and no senior student should be a passive bystander if they witness any inappropriate behaviour."

Felt obliged to speak up

In a subsequent Instagram story, Choo explained that she is stepping up and speaking out about these incidents of harassment now despite not having been vocal about issues regarding feminism since she was in junior college.

She wrote that she was moved to do so when three of her friends shared their experiences with her, adding that although she had not personally experienced sexual harassment, she said she would hear micro-aggressions like "my body will always be a piece of meat" and that her "dressing will always be policed". 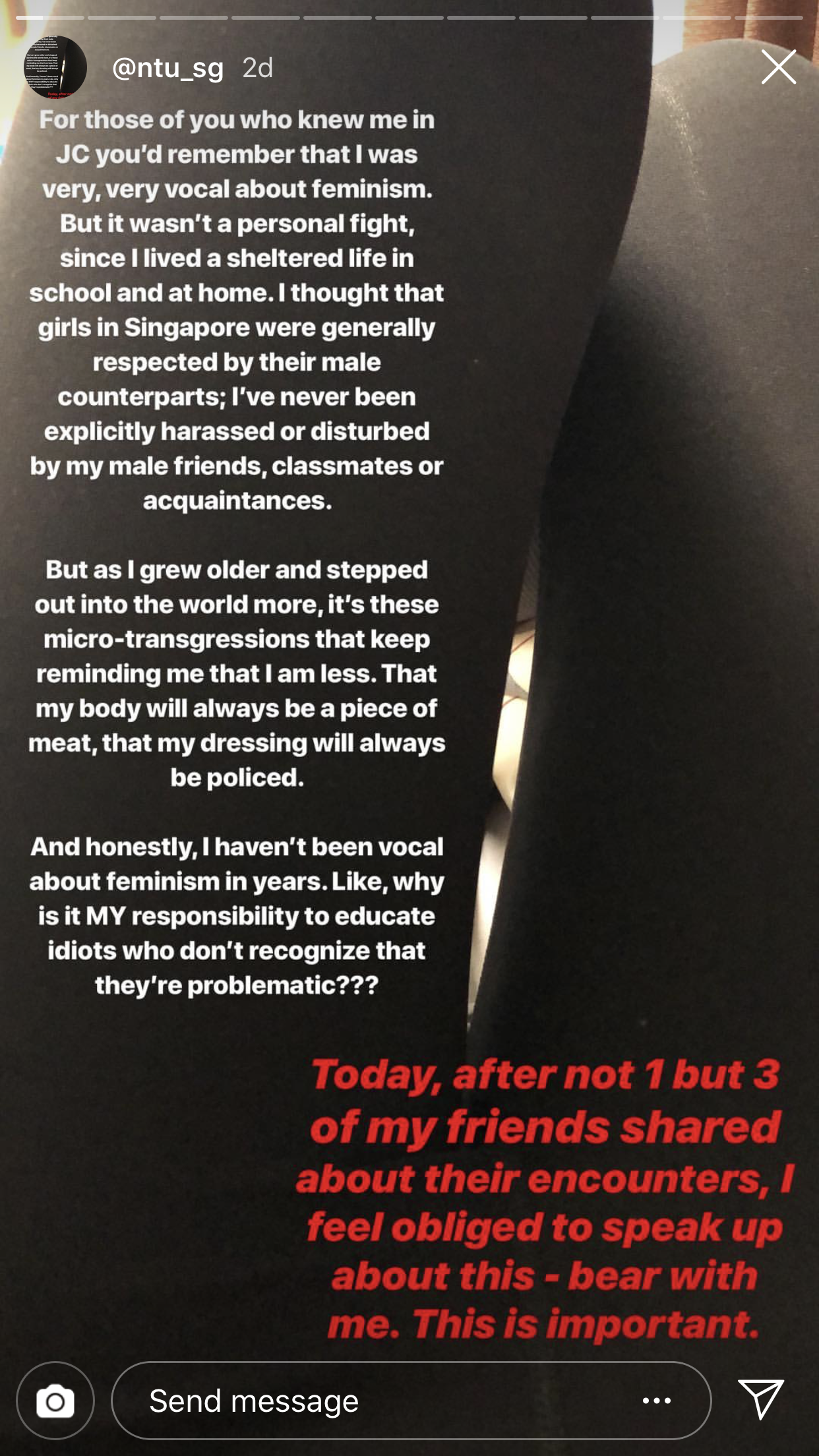 Choo also shared with Mothership the following notice from a student initiative that was pasted around the NTU campus with the aim of bringing light to the problem of sexual assault on campus and helping the victims. 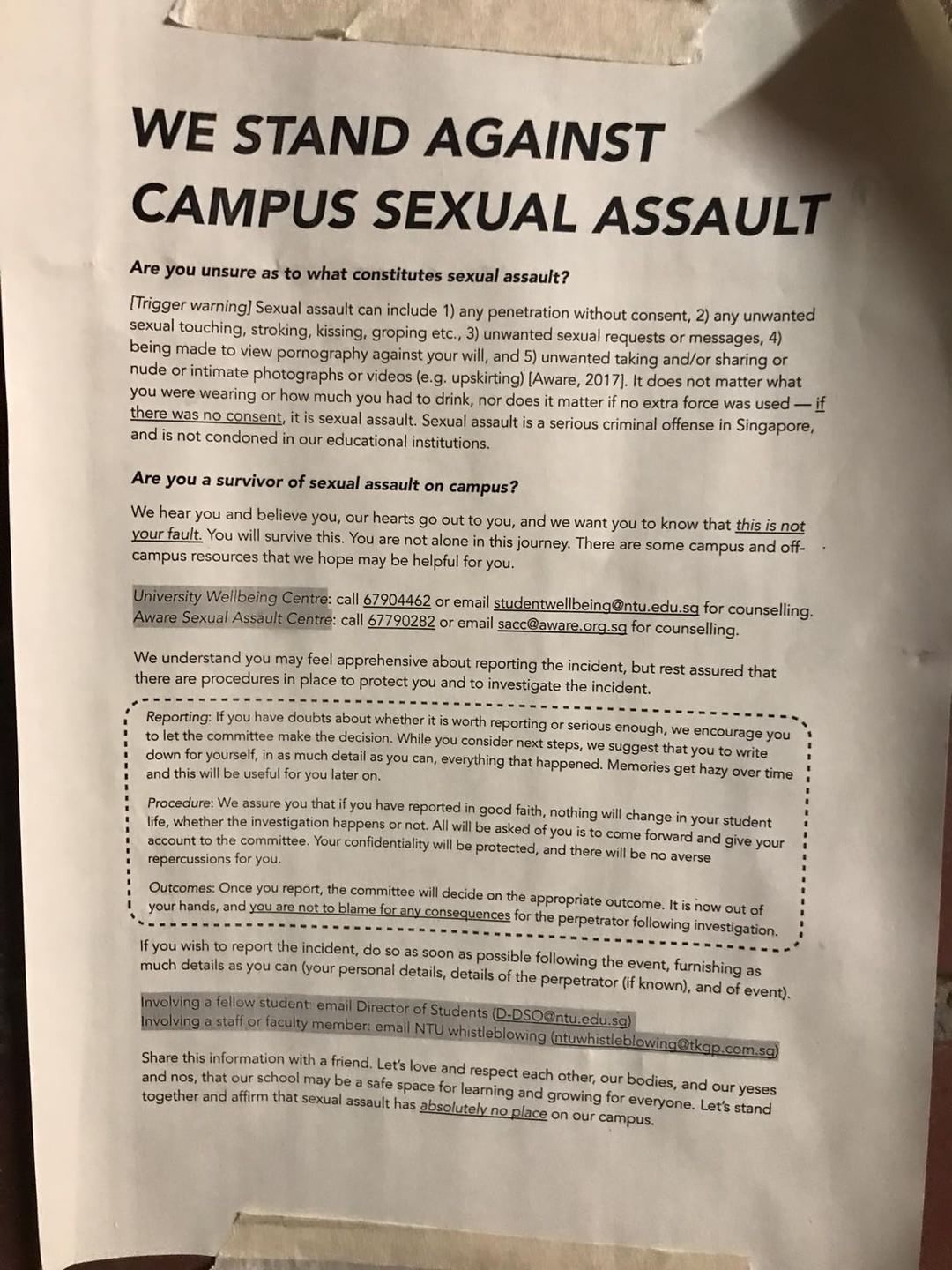 Choo also received messages from her friends and other alleged victims of sexual harassment in incidents that they claim all happened within the university campus.

Regarding the following cases, however, NTU spokespersons tell us they are unable to share specific information in the interest of protecting student confidentiality. 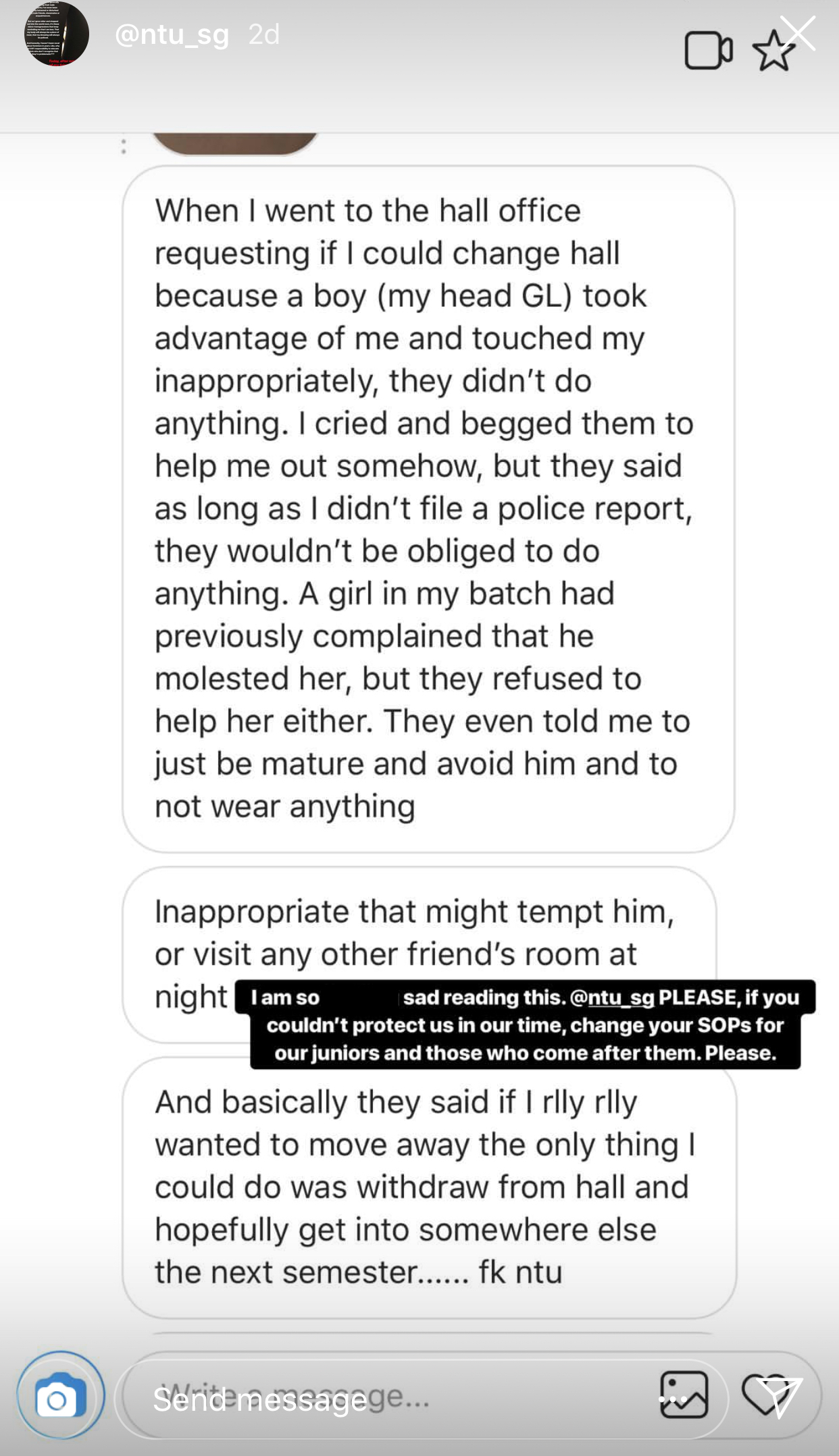 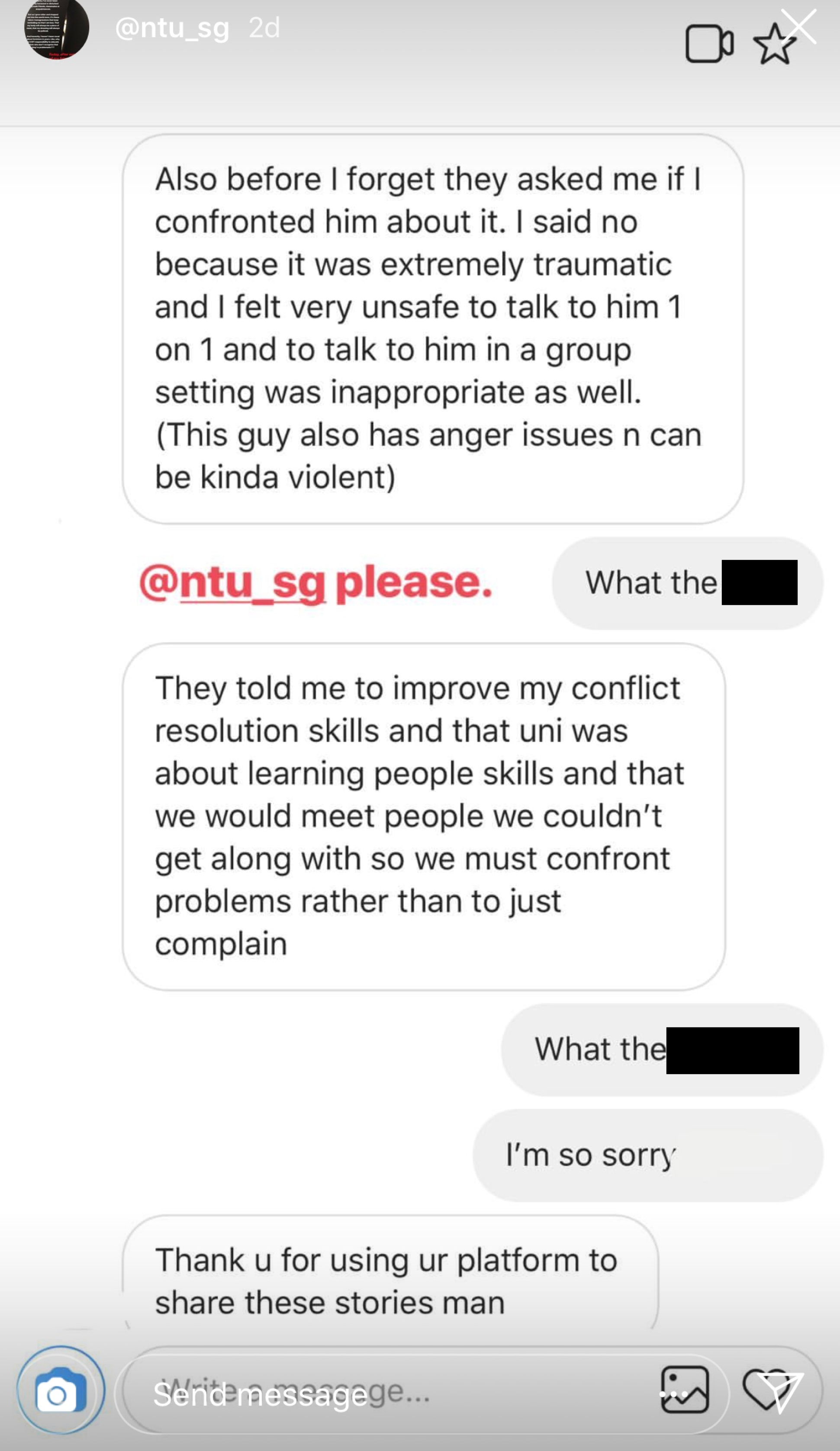 Mothership understands that this case was not investigated as the girl's allegations were not verified through identification of the alleged molester. 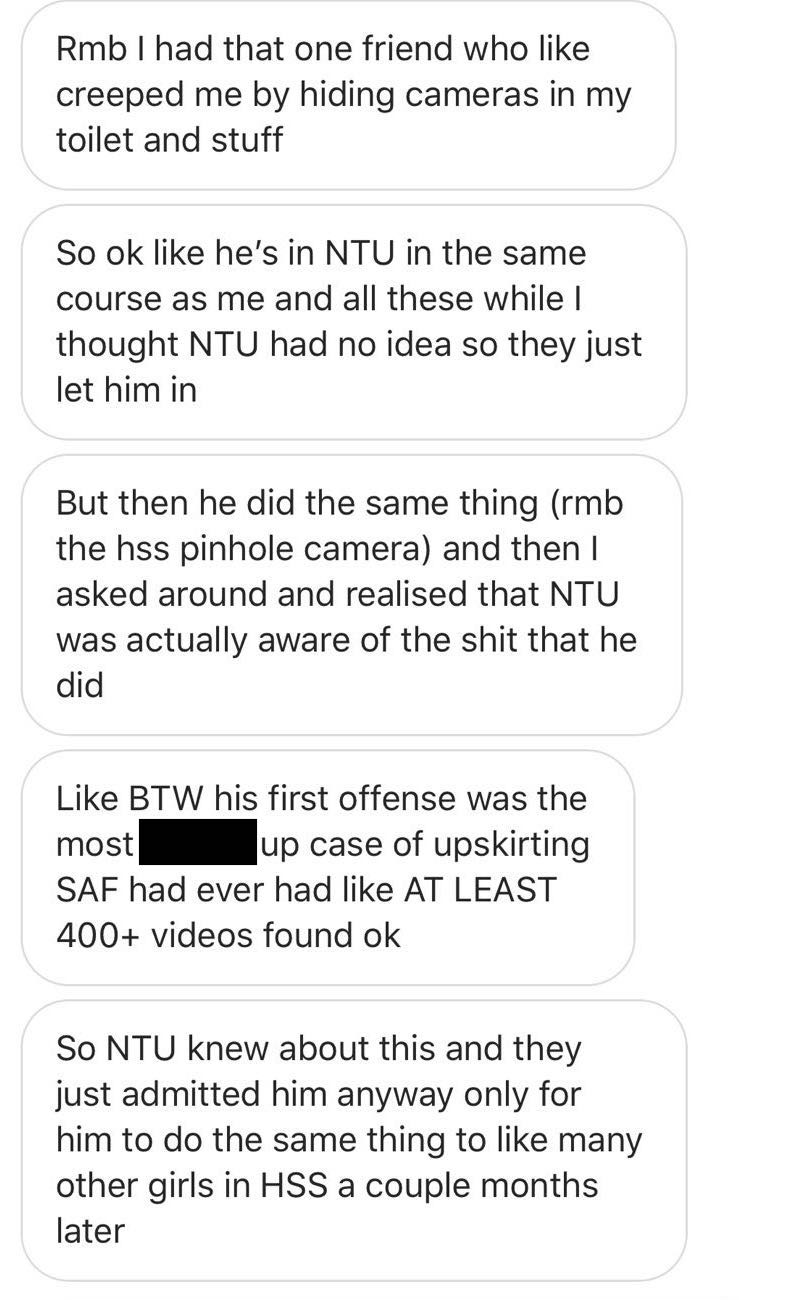 Mothership understands that NTU was not aware of the alleged pinhole camera offender's previous offences, which we have learned he was apparently convicted for in military court and served a sentence in detention barracks.

If this is true, and the student had not declared any previous convictions he may have had at the point of his admission to NTU, he would have committed yet another crime in withholding information from a public servant. 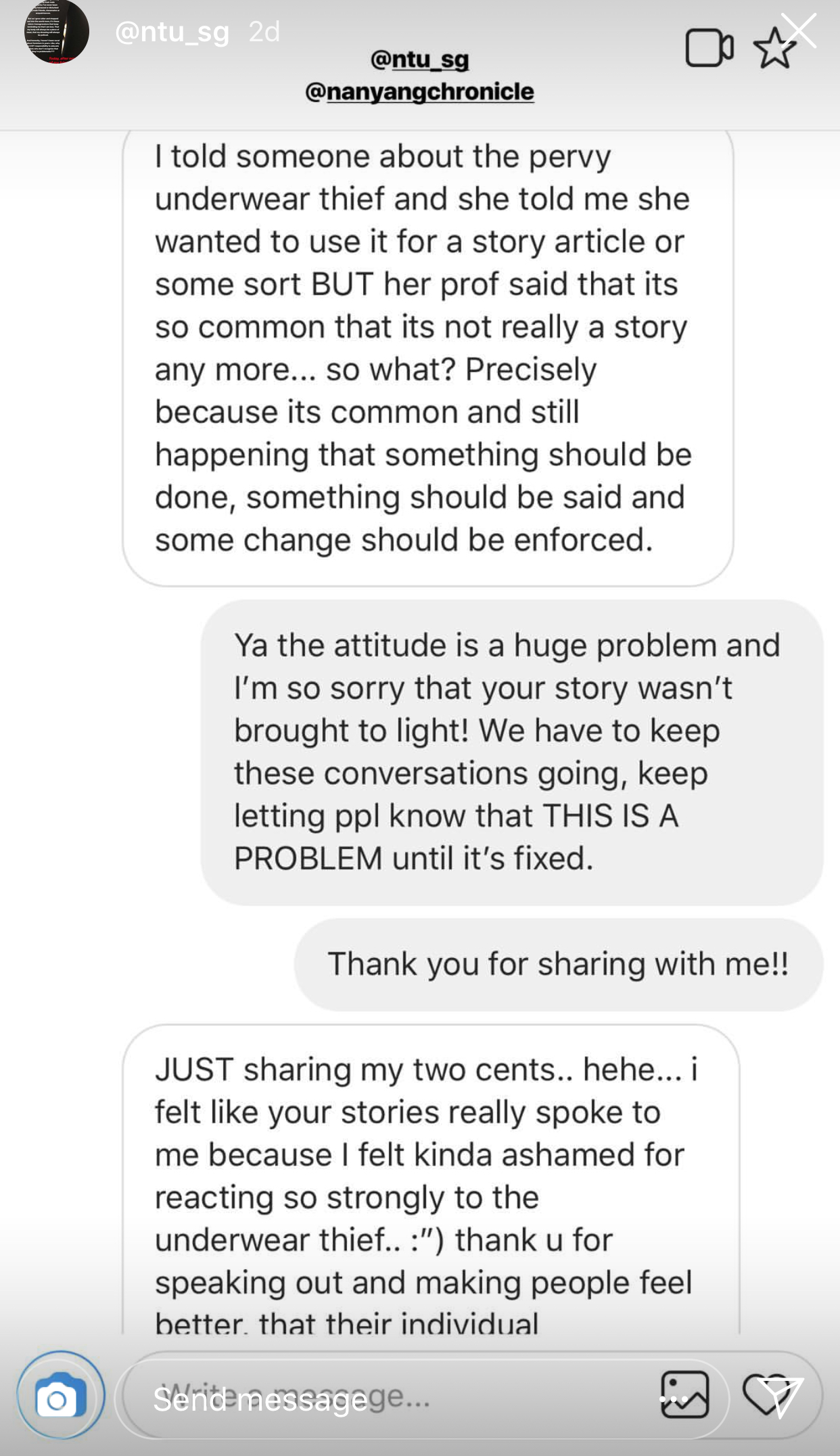 After posting the screenshots, Choo also encouraged other victims of sexual harassment to speak out about their experiences and against such behaviour, adding that she would share their stories for them if they are not comfortable with revealing their identities.

You can read more about the sexual harassment cases on Choo's Instagram stories here.

All screenshots & top image via @candayye