A Singaporean who goes by the name Muhammad Fauzi posted the following encounter with JB's Customs, Immigration, and Quarantine Complex (CIQ) where he claims a customs officer tore up his passport and denied him entry to Malaysia unless Fauzi paid him "kopi money" (bribery).

A summary of what happened

According to Fauzi, this was the conversation that took place:

JB CIQ officer: “Bro, I can help you pass through and let you see your wife but if I help you, you need to help me too.”

Fauzi: “What do you need me to help you with?”

JB CIQ officer: “Ouh, like this also need me to spell it out and teach you?”

Fauzi: “Oh so you want money? Money in your pocket will let me through?”

Fauzi then told the CIQ officer that he would bring the torn passport back to Singapore. The CIQ officer allegedly smiled and told him to make a new passport before he could go return to his home (in Malaysia).

Fauzi went back to speak to Singapore's Immigrations and Checkpoint Authority (ICA) officers at Tuas where he allegedly found out that he wasn't the first guy who experienced this. He was also advised to lodge a police report.

Here's the zoomed-in portion where Fauzi described the incident:

Not allowed to post officer's photo or particulars online

Fauzi added in the comment section that he personally saw the CIQ officer "using his palm to forcefully tear" his passport. Fauzi also claimed that he was warned against sharing the officer's name and photo online as there will be "consequences". "Got take his name bro?"

"Have. Also have his pic. But Malaysia custom warned me if his particulars got shared, there are consequences since it's a restricted area" 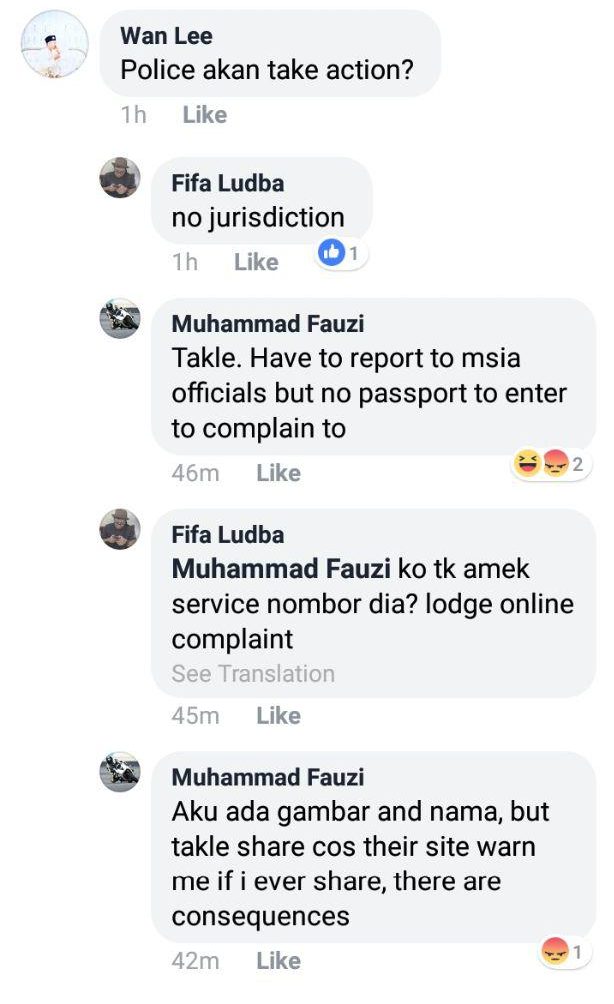 "Cannot. Have to report to Malaysia officials but no passport to enter to complain to".

I have the photo and the name, but can't share because their site warn me if I ever share, there are consequences."

Fauzi ended his Facebook post by urging all Singaporeans to be careful when entering Malaysia. If you do encounter such an issue, remember to lodge reports with the Singapore and Malaysian Police.

What to do if you encounter difficulties overseas

For Singaporeans who are in distress overseas, the Ministry of Foreign Affairs (MFA) has a 24-hour Singapore hotline: (65) 6379 8000 which can offer assistance or advice.

If you encounter difficulties in Malaysia in particular, MFA has important Malaysia-specific travel advisories and mission contact details here.

All photos via Muhammad Fauzi.