On Aug. 25, Geraldine Ng took to Facebook to describe a "disheartening" incident where her claim for a travel insurance payout was denied.

Ng said that her claim was denied because "the airline letter did not indicate that the delay was due to mechanical delay".

According to AIG's summary of benefits, travel delays must be due to:

This does not include what Ng calls "operational" delays, such as air traffic delays or delays in airport operations.

Travel delays also have to be at least six hours before AIG approves a claim (an individual is entitled to S$100 for every six hours of delay).

Are these terms by AIG typical for travel insurance policies though?

What about other travel insurance providers?

A good number of travel insurance policies, such as those provided by NTUC and Aviva, however, do not have such terms on "mechanical" delays.

For instance, this is Aviva's:

However, it would be helpful to note that each travel insurance provider has terms and conditions that vary.

For instance, Aviva's "General Exceptions" include war, meaning that the policy does not cover consequences connected to or resulting from:

"War, invasion, act of foreign enemy, hostilities or a war-like operation or operations (whether war be  declared or not), civil war, mutiny, rebellion, revolution, military rising, insurrection, civil commotion  assuming the proportions of or amounting to an uprising, military or usurped power."

This is in contrast with AIG's, which covers delays due to "civil unrest, riot or commotion or strike".

In the comments section of Ng's post, one response said that she bought travel insurance from Chubb, and pointed out a clause similar to AIG:

Ultimately, it boils down to what you wish to be insured for.

And given the different terms and conditions offered by various travel insurance providers, Ng advised everyone to "read [their] policies" and take note of these details when purchasing travel insurance.

And in case you can't see it: 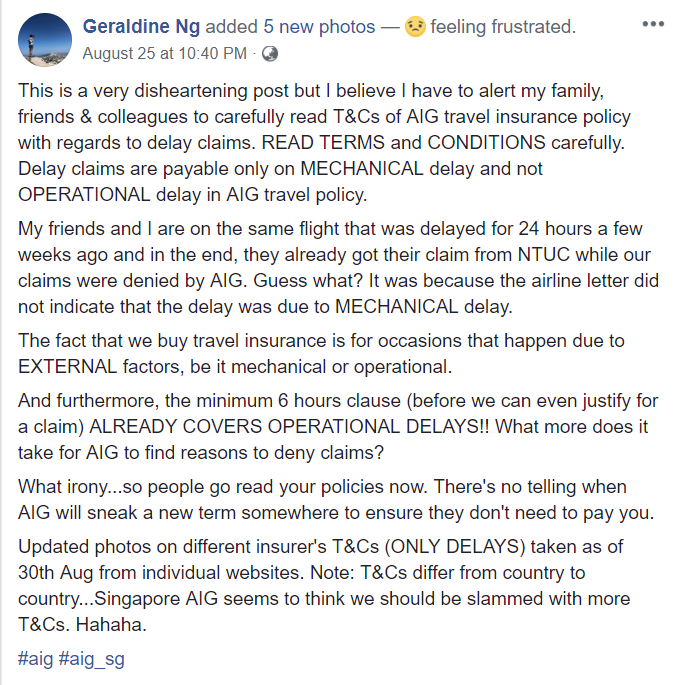