SgInstaBabes is a group of self-proclaimed influencers in Singapore who pose for photos in various states of undress.

However, the Instagram page appears to have been removed.

On Aug. 23, the collective decided to expand their operations to a Patreon page.

This is to allow supporters to contribute money in a more direct manner.

Patreon is a platform for artists, musicians and other creative types to seek financing directly from supporters of their work.

The idea is that if you liked someone's work, you'd sign up to chip in with a recurring amount of money each month.

With enough supporters, the artist wouldn't need a day job and can produce content full-time.

This is SGInstaBabes announcement video for their new Patreon venture, which has since been removed from YouTube:

"We produce beautiful photos and funny and entertaining videos with our team of beautiful models and other social media icons in Singapore."

The idea seems clear: Pay some money and ensure the flow of more "beautiful" photos and videos.

The type of access Patreon offers to supporters is tiered: Those who contribute more are entitled to more perks.

For the gentleman on a budget

You get nothing but appreciation.

For the gentleman with more disposable income

Note that with more money you give, the perks get more exclusive. There's probably a metaphor for life in there somewhere.

For the gentleman with more than a passing interest

You're no longer a fan. You're a friend. And unlike those mere fans, friends can actually see the SGInstaBabes in person and take their own photos. But just as a spectator.

For the gentleman with too much money

You have ascended to the highest ranks. Not only to you get to see the SGInstaBabes, you get to hang out with them.

And if you really have a spare S$5,000 (which appears as $3,750 because it is in USD) lying around every month, you can party with them on a yacht.

It's also limited to one "super awesome" patron, so that means you get to be the only person in Singapore who does this.

Needless to say, the backlash has been swift.

Their feeble attempt at monetising has been laughed at and frowned upon as it is seen as cashing in on the girls and getting them involved in a pay-for-play business model.

This is so as the highest Patreon tier is called "The Ultimate Sugar Daddy".

And in response to accusations that the business model is unsavoury, SGInstaBabe posted on Instagram Story defending their actions.

The post acknowledged that "there will definitely be a lot of criticism", but also said whatever is being done abides by the law:

"But our conscience are clear. Everything we do is legal, safe and with the consent of every party involved. We will never jeopardise the safety and modesty of the ladies we work with and there is no one-on-one activity with any subscriber. If any subscriber crosses the line, we rather not have his money”. 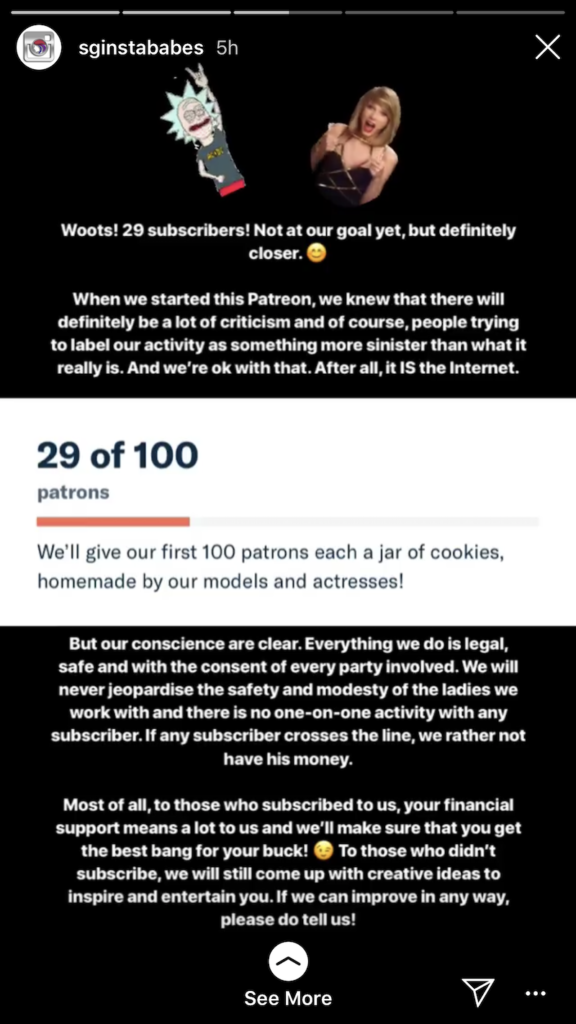 However, it was mentioned in another Instagram Story that some of the girls featured in the photo shoots are 16 years old and above. 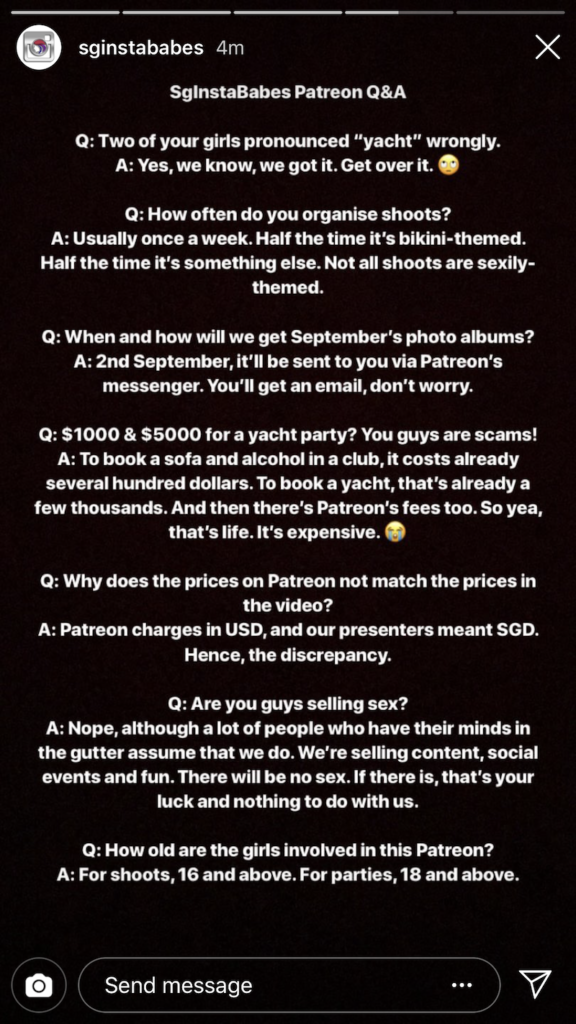 Who are the patrons who signed up?

Within five days, a total of 89 patrons have signed up, but it is not known how much money has been collected as that information is not revealed.

However, screen shots of a WhatsApp chat message circulated by YouTube personality Dee Kosh showed that the patrons might have been from SGInstaBabes itself in a bid to inflate the Patreon count.

This set of three Instagram Stories allegedly showed a message sent out by Lai Wee Kiat, the 28-year-old Malaysia-born founder of SGInstaBabes, where he revealed the motivation for setting up the Patreon and his request for the ladies he oversees to sign up to rake up the number of patrons: 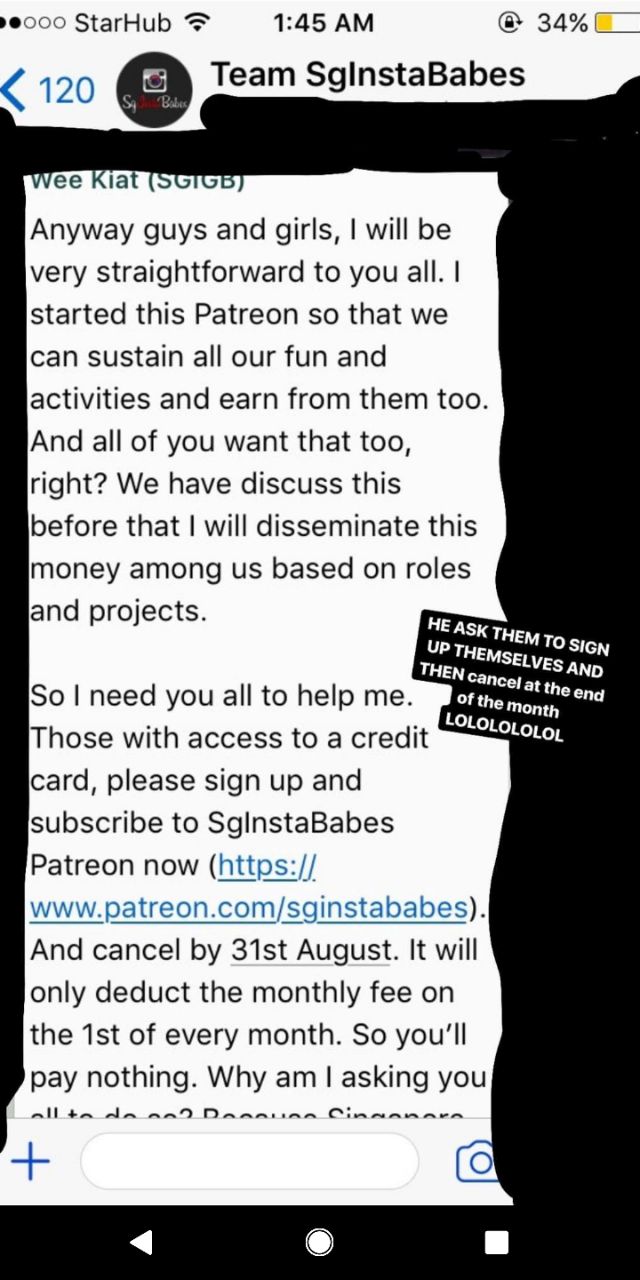 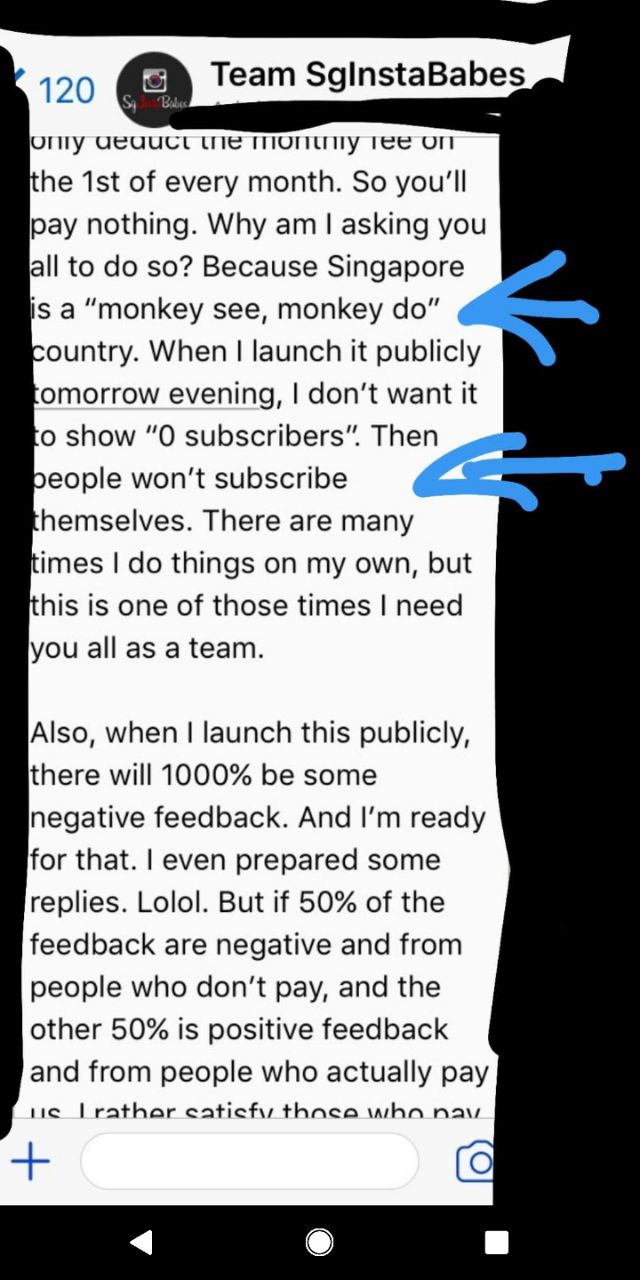 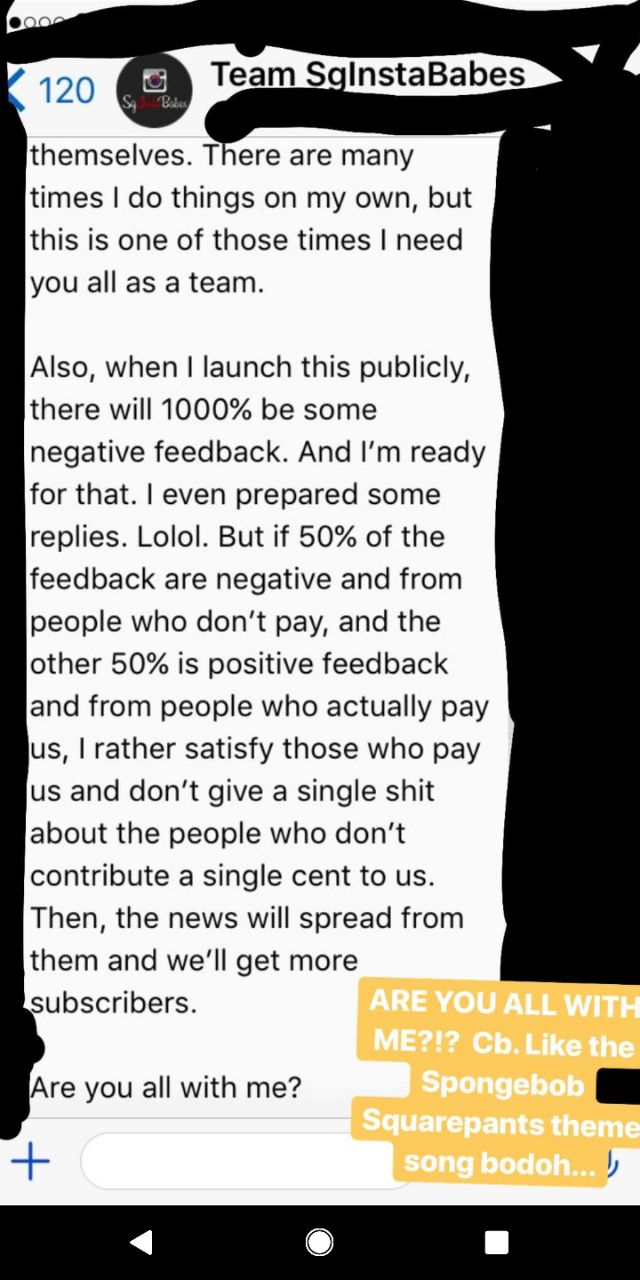 In response to the backlash, SGInstaBabe founder Lai wrote in an Instagram post that his funding initiative using the girls and women is not meant to objectify them.

The post, which has since been taken down, is reproduced in full here:

Thank you all for your attention! Even though most of it is hate, I’m seriously used to it already. ? In fact, I would like to take advantage of this attention to share with you all something which I have kept in my mind and heart for a long time and I think this is the perfect time to share it.

Firstly, Singapore is a very women-friendly country. And that’s awesome! The police are efficient and effective, the Women’s Charter act is protecting our lovely ladies and women have access to education and income opportunities as much as men.

But unfortunately, on the dark web, it’s a totally different scene. You all know what I mean. Don’t act innocent. ? The sex Tumblrs, Sammyboy and now, even sex discussion Telegram groups. And through the power of anonymity, members on these platforms do things like share photos from girls’ Instagram without their permission, take upskirt videos, plant hidden cameras in public toilets, widely share girls’ sex videos which were leaked without her consent, etc.

And all these are accompanied by crude and degrading discussions about the girls involved, judging their body parts, disregarding their modesty, making lewd comments, all in celebration of humiliation and amusement. And it HURTS these innocent girls. It hurts them bad. It saddens them that an innocent action on their end can bring so much judgment and humiliation. Is it right for a girl to fear that by just posting bikini photos of herself online, wearing a skirt (or even shorts) in public, using public toilets that her privacy will be invaded and her modesty disregarded? Is that the culture you all want to live in?

Unfortunately, this attitude towards women is brought over to mainstream social media. Even for non-sexualised content, I see degrading and lewd comments. I get accused of objectifying women but I see that in fact, many of you WANT to objectify women for your own amusement. Women can’t be themselves because of the fear that social media will pervert even the most innocent things they do. Why can’t you all let women dress however they want and do whatever they want as long as it doesn’t mess with you or the law? And please don’t say, “It’s the Internet, it’s my right to say whatever I want”. Yea, you could, but do you know how it affects others?

My team and I aren’t trying to objectify women. When I started SgInstaBabes, it was to bring out the vibrancy and the beauty of girls in Singapore, and yes, sometimes being sexy and cheeky too. When I started our Patreon, it was to give a chance to our followers to be more involved in our activities and to fund us. We share more photos, we organize photo shoots and we party. And we’re thankful for all our subscribers, not think that we’re so great and they should feel privileged to join us. That’s it. Anything beyond that is your assumption and extrapolation. Unfortunately, I see that our innocent intentions are being perverted, just like how the dark web would.

Funny thing is, those who are perverting my intentions aren’t the girls I work with and see me and know me. Heck, they aren’t even people who follow SgInstaBabes and have seen the stories and posts we made. They are people who are here because of drama and made assumptions based on shallow judgments. And they don’t care about the accuracy of what they say. They just wanna jump on the bandwagon. Hence, empty vessels make the most noise.

I’m not trying to be a hero, but I think that in our very connected society, we’re sometimes too quick to judge. And unfortunately, we usually choose the worst possible judgment. And yes, content on SgInstaBabes can be sexy sometimes. But I hold true to my belief that every girl/woman has her right and choice to portray herself as sexy but still be respected. And don’t you love sexy too? Yes? Then stop degrading girls who post sexy photos of themselves online. I hope that we all can have more respect for each other online and always remember that behind every screen is a real human being.

Sorry if I’ve offended any of you and unless it’s an empty insult and hate, please feel free to DM us any feedback you have for us to improve our content. We’ll be sure to reply whenever we can.