The founder of Instagram account @SgInstaBabes — which had about 100,000 followers — has expressed his disappointment at how things are turning out for him, after setting up a Patreon page to raise funds for the organisation's "content creation".

If you need more information about SgInstaBabes: 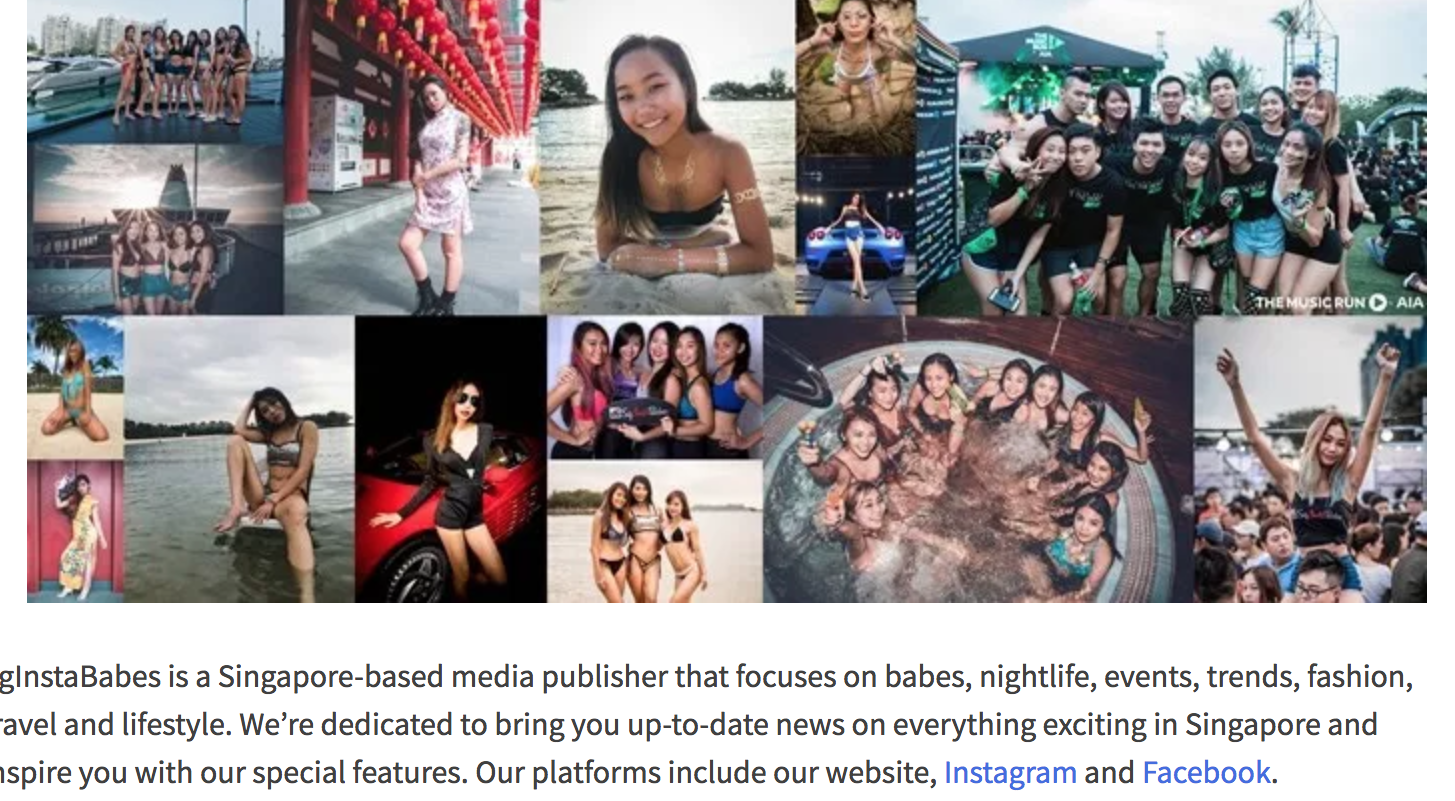 The fund-raising project garnered much backlash for its alleged exploitation of teenaged girls.

In the past couple of days, @SgInstaBabes is no longer available on Instagram.

Interestingly, the Patreon page appears to be up and running at time of writing — although it may soon be taken down.

[Update: The Patreon page is no longer available.]

Before the disappearance of these accounts, Lai got into an online tussle with top Singaporean influencer Xiaxue, who posted screenshots of Lai allegedly complimenting a 15-year-old girl on her body.

The stories were posted on the night of August 27, and started with Xiaxue's essay criticizing the titillating video put up by SgInstaBabes to garner Patreon donors: 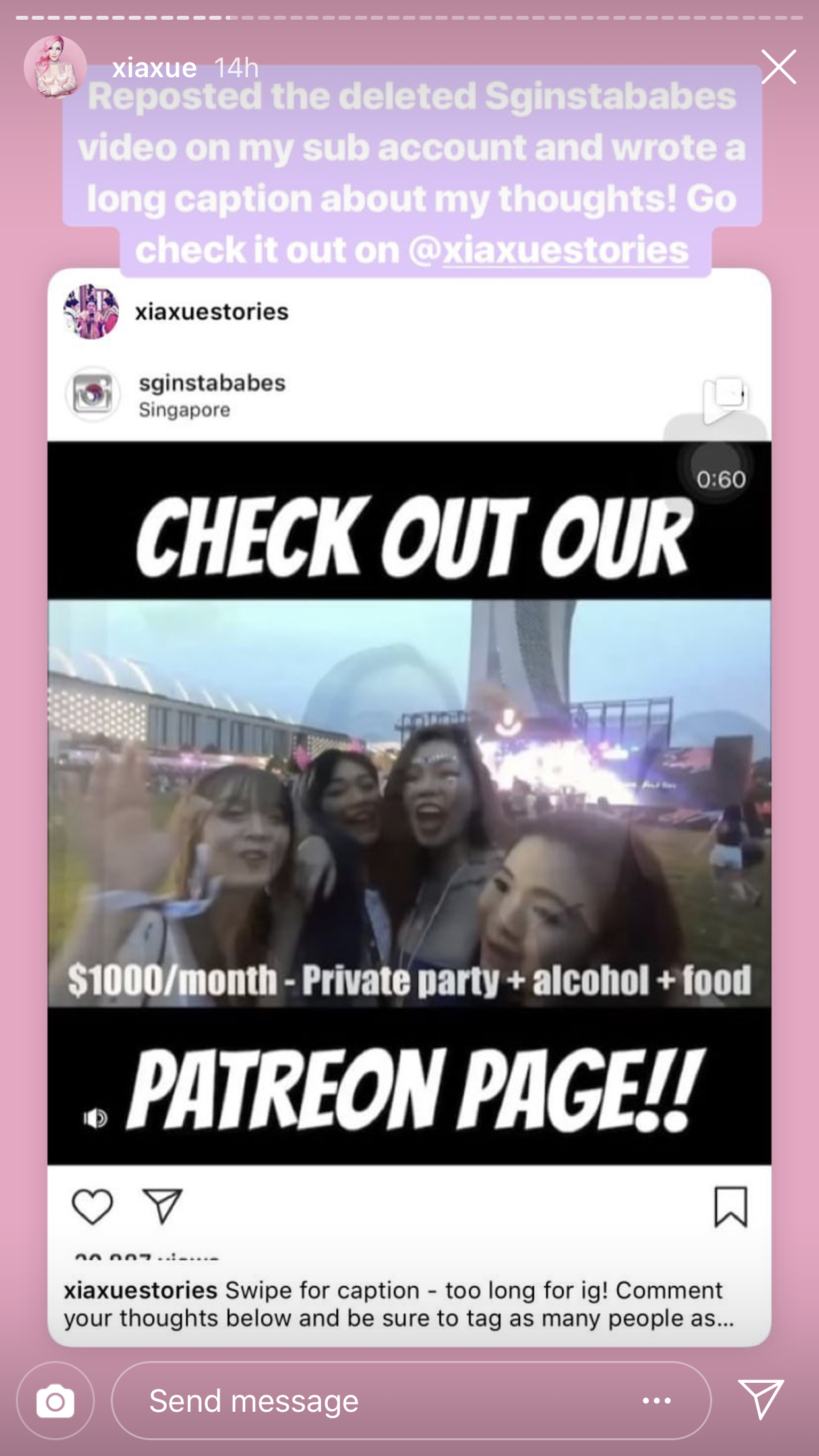 You can watch/read it here:

Swipe for caption - too long for ig! Comment your thoughts below and be sure to tag as many people as possible so everyone can see this disgusting behavior

In essence, she chided the girls for having little self-respect and SgInstababes for taking advantage of their naivety and insecurities.

Subsequently, the pink-haired influencer shared a comment that Lai posted, defending himself against the lewd accusations: 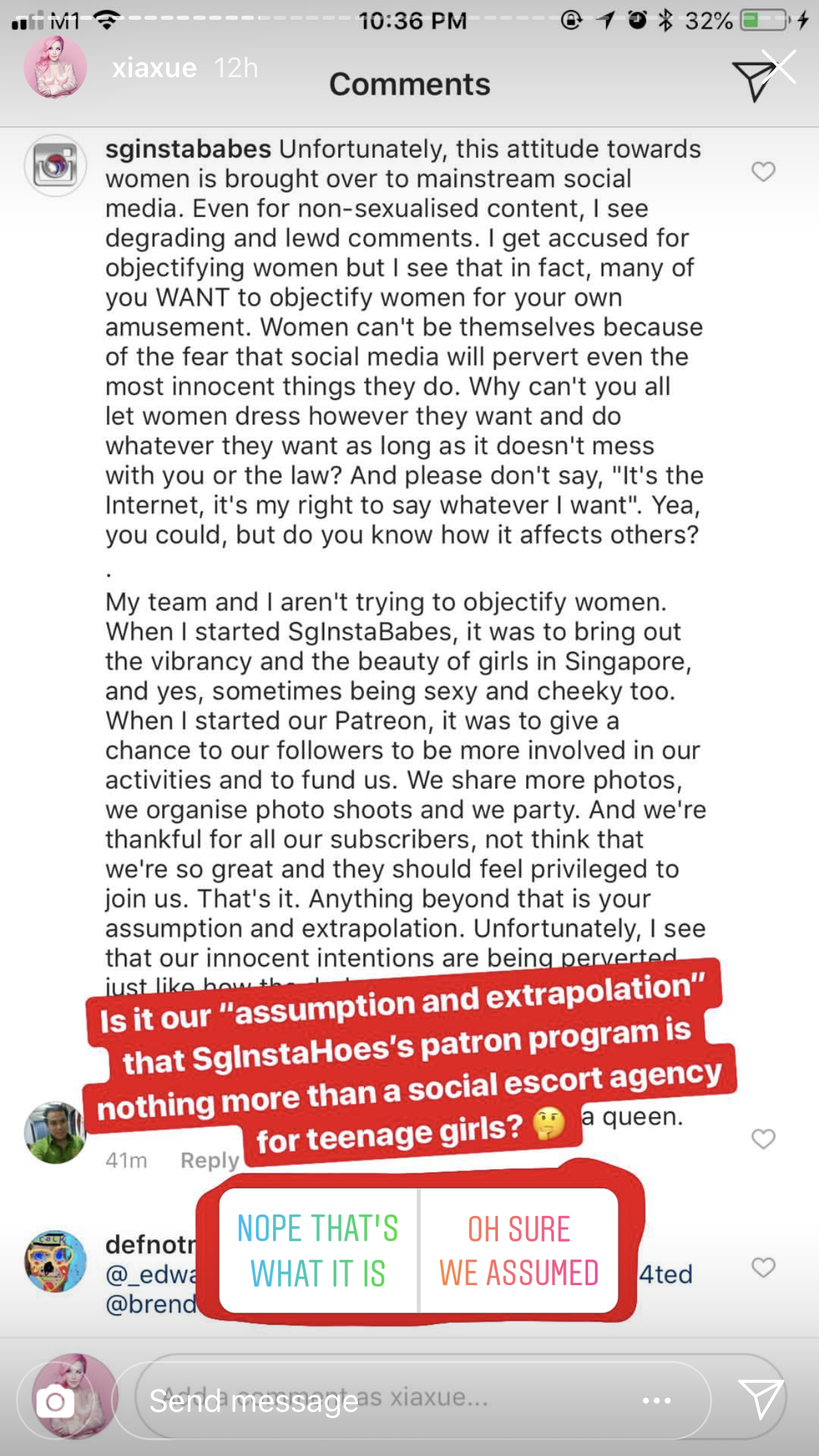 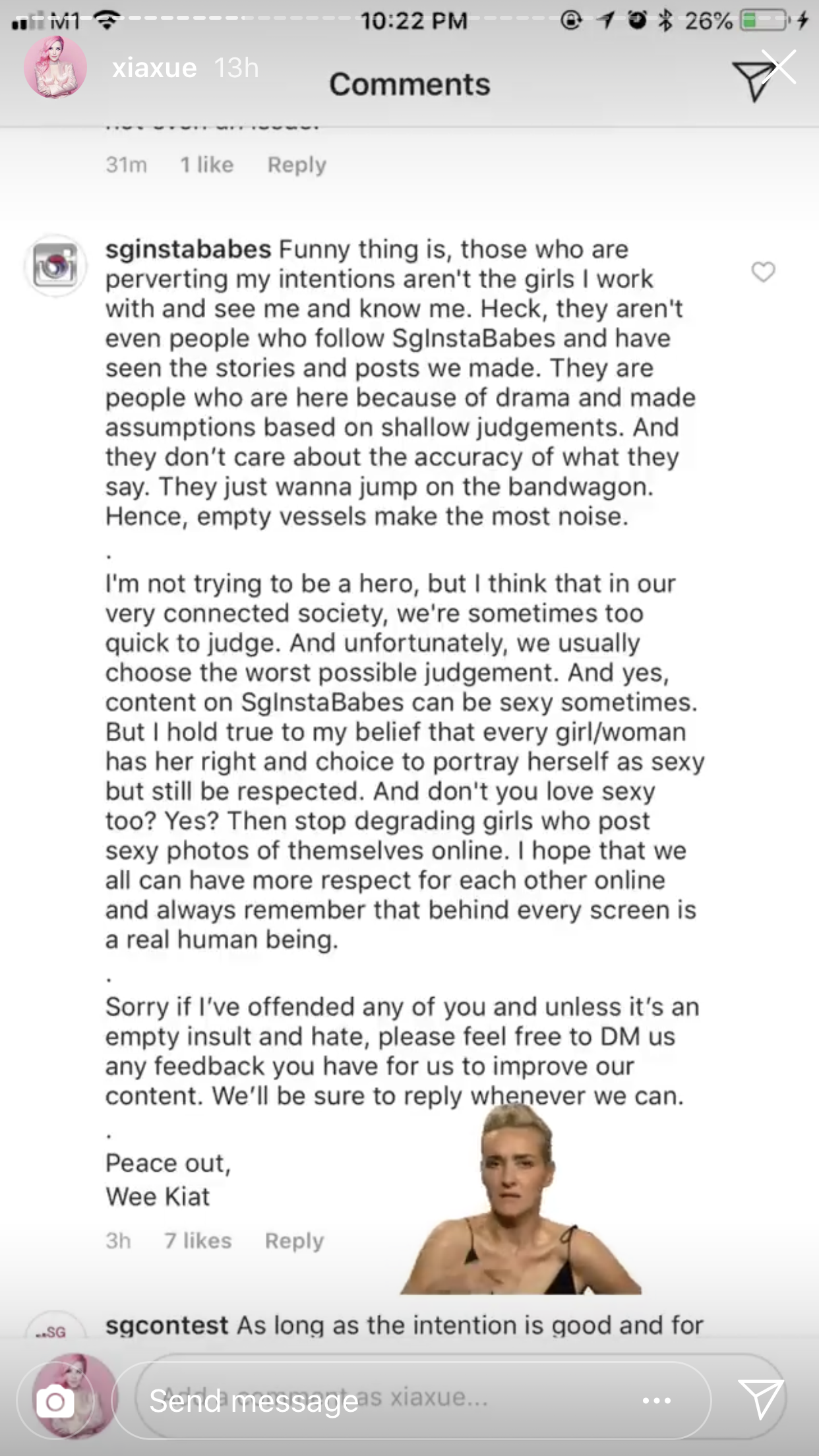 According to Lai, the accusations were based on "shallow judgements", and he asks for more respect for girls who portray themselves as "sexy".

This is especially so as they only wish to bring out the "vibrancy and beauty" of the girls in Singapore.

Xiaxue then gave him a whacking: 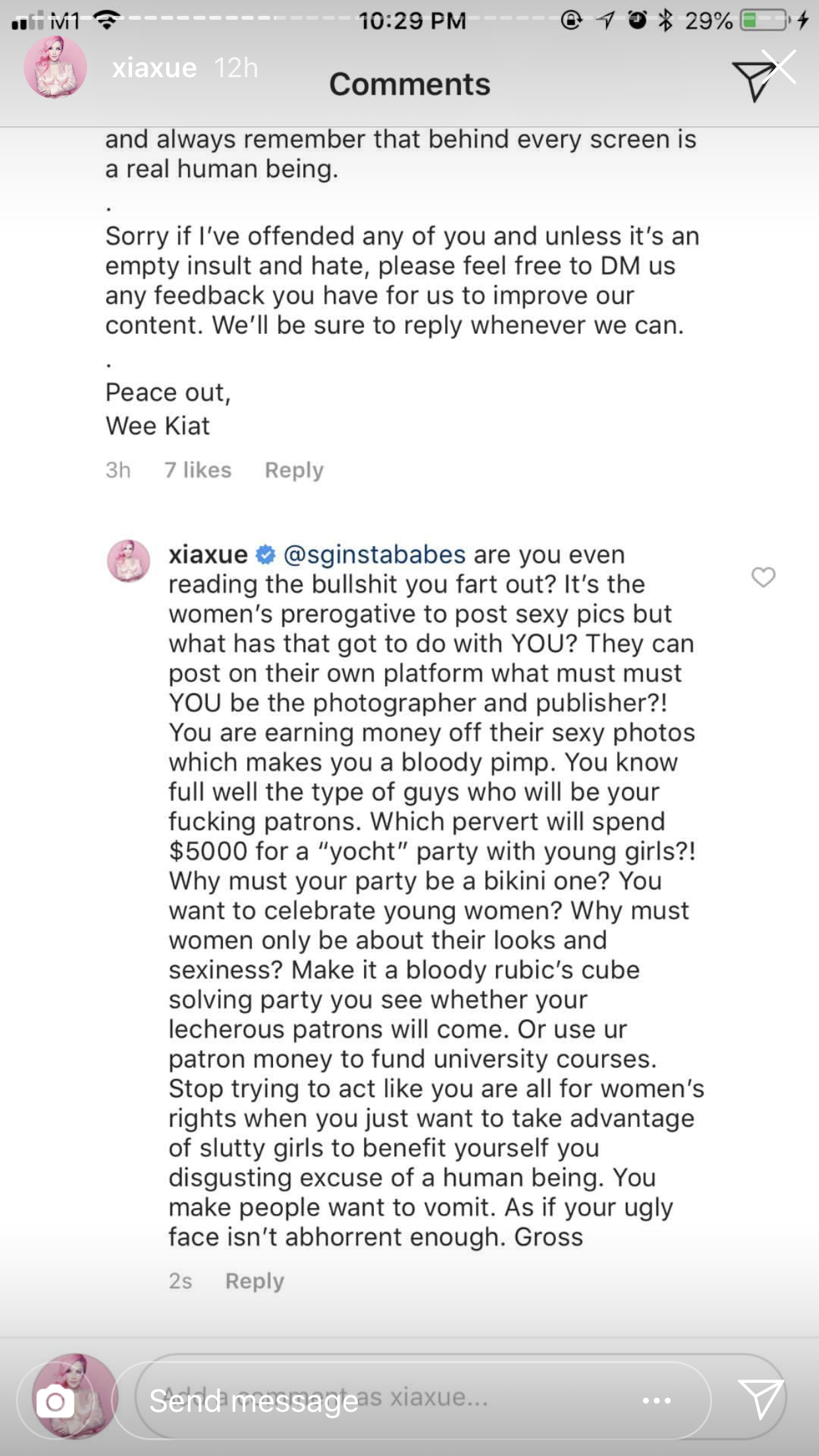 Lai then got in touch with Xiaxue through her direct messages: 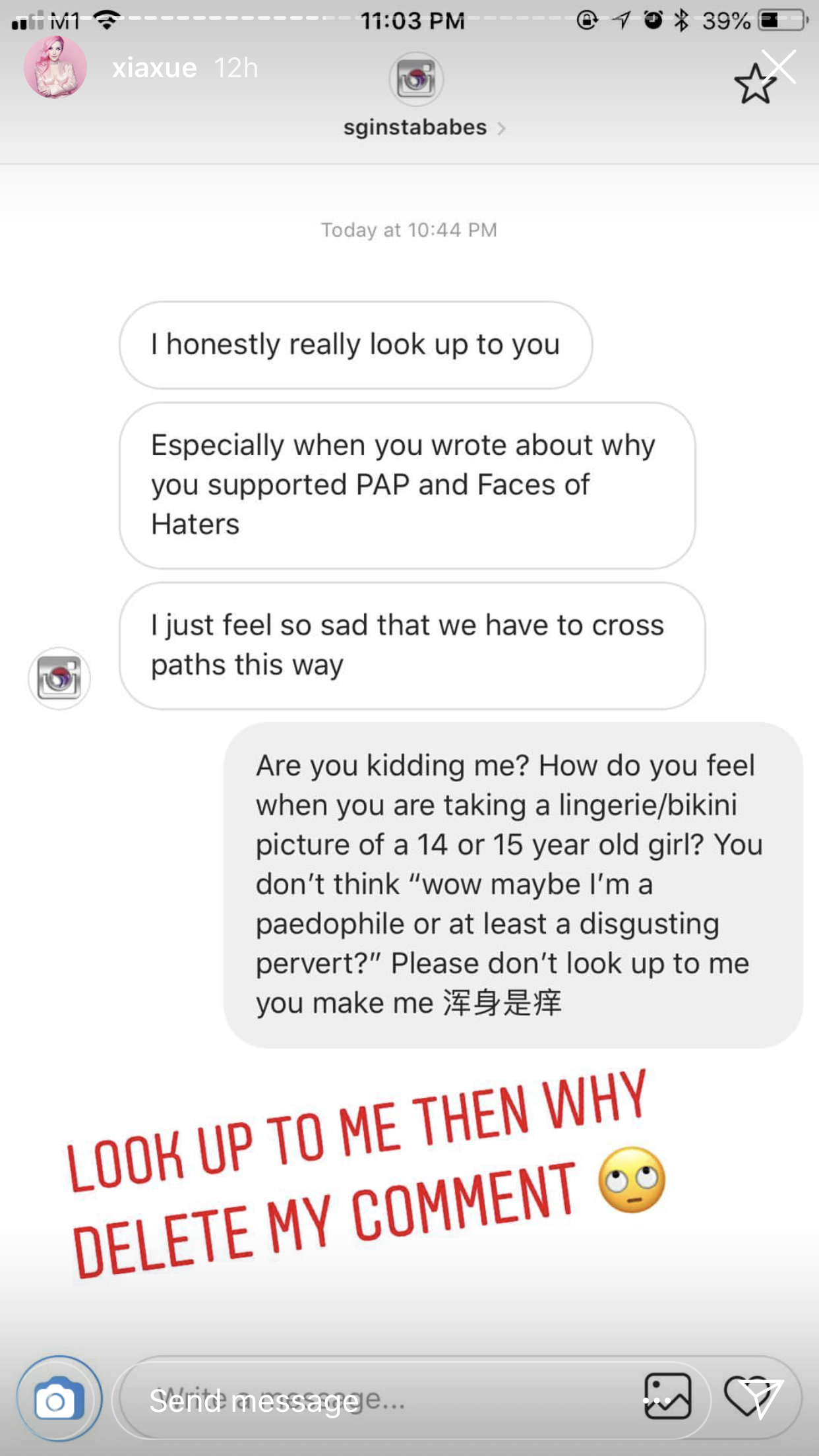 The Chinese phrase literally translates to "itchy all over", but indicates revulsion.

Subsequently, Xiaxue claimed that a girl sent her WhatsApp screenshots of Lai hitting on her when she was just 15 years old: 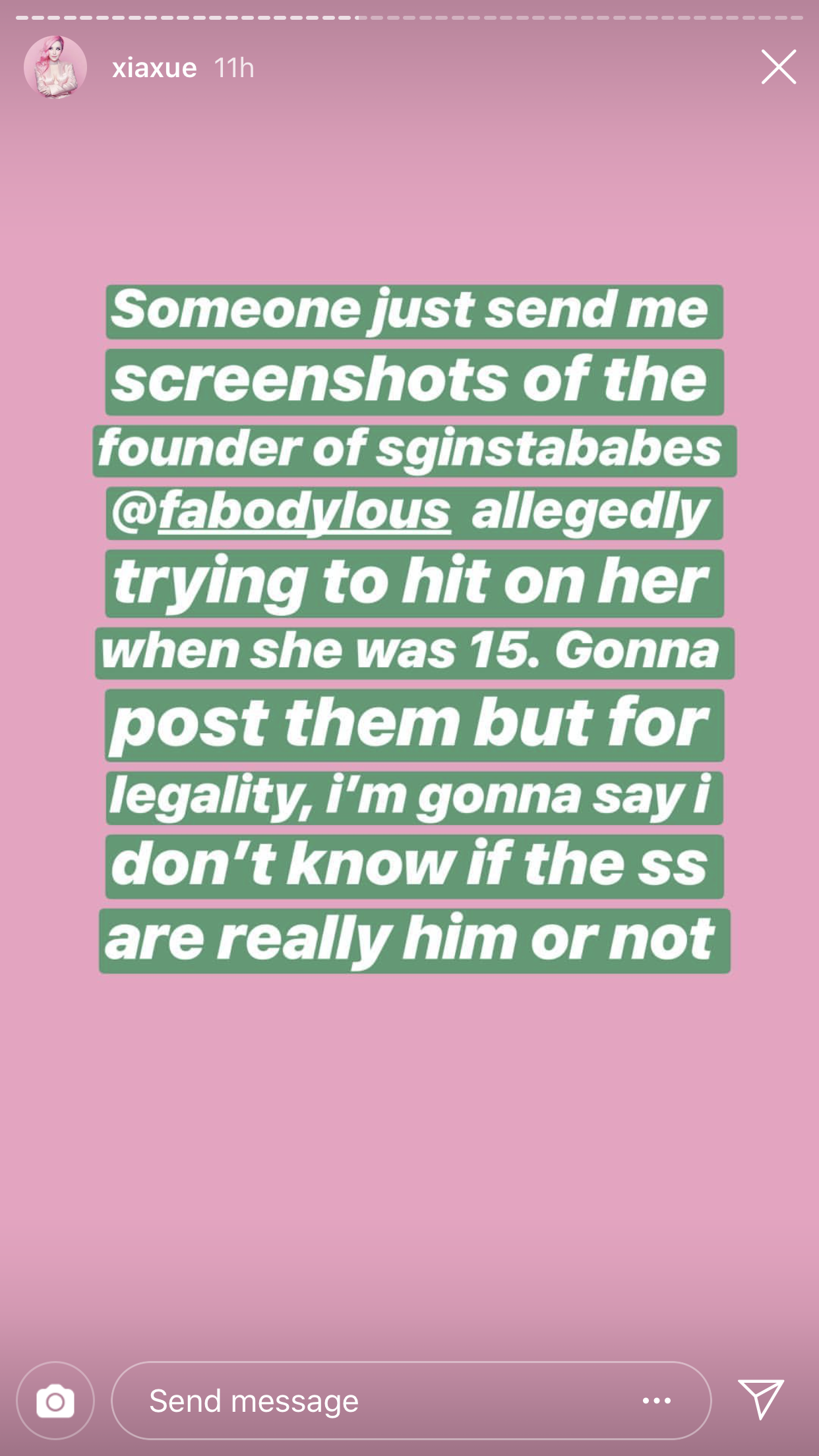 Here's the conversation between Lai and the then-15-year-old, with Xiaxue's commentary superimposed: 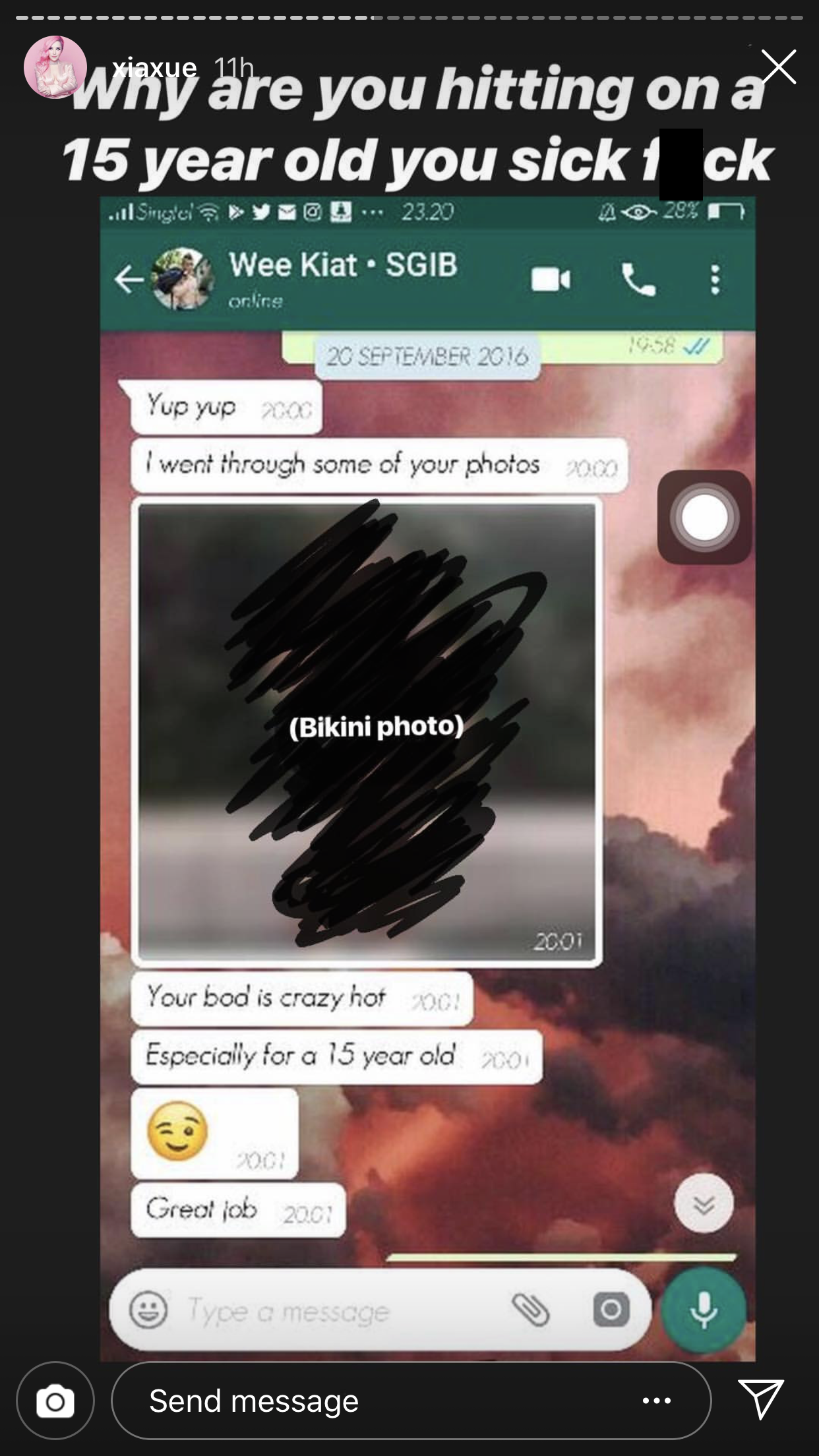 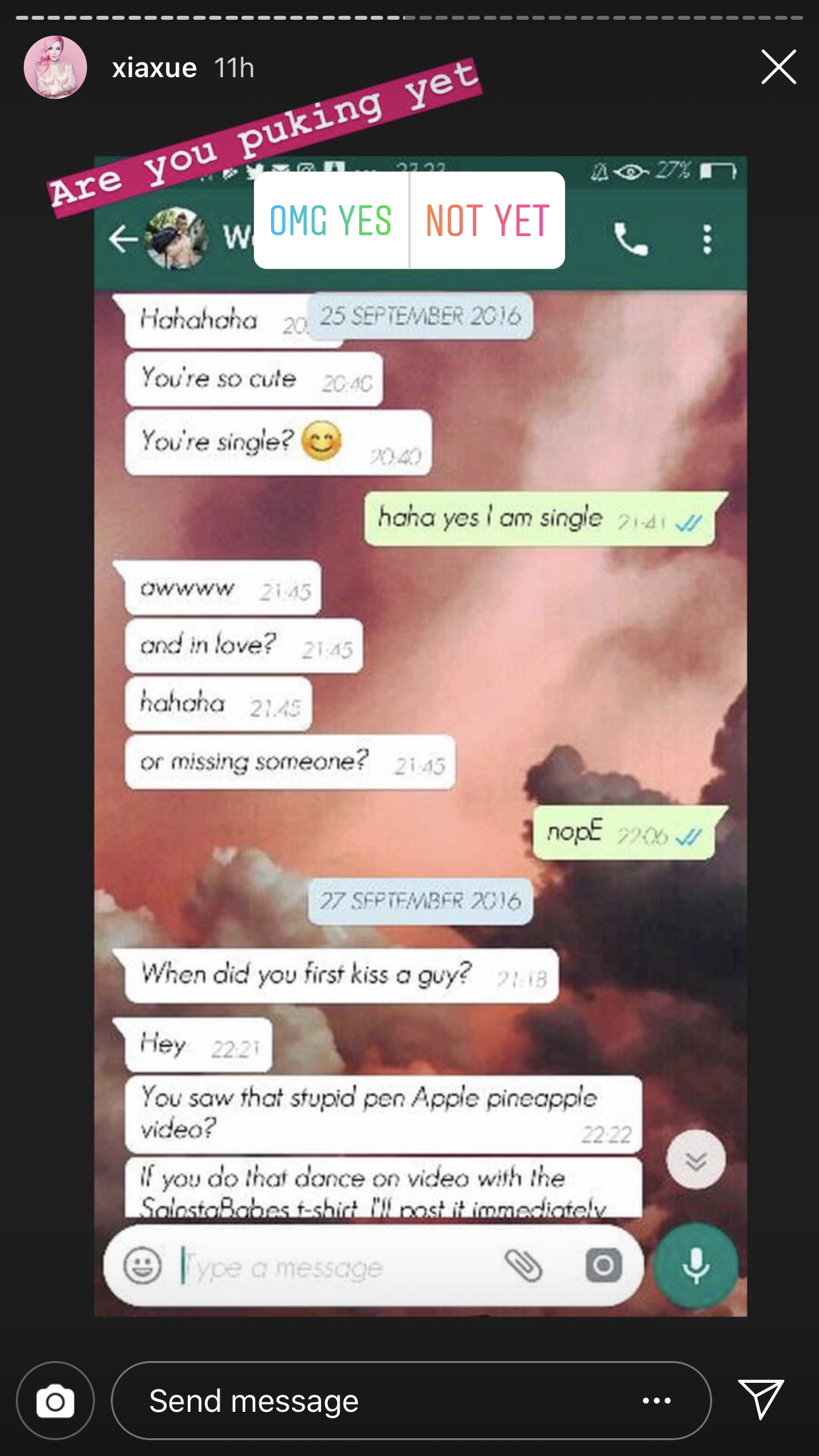 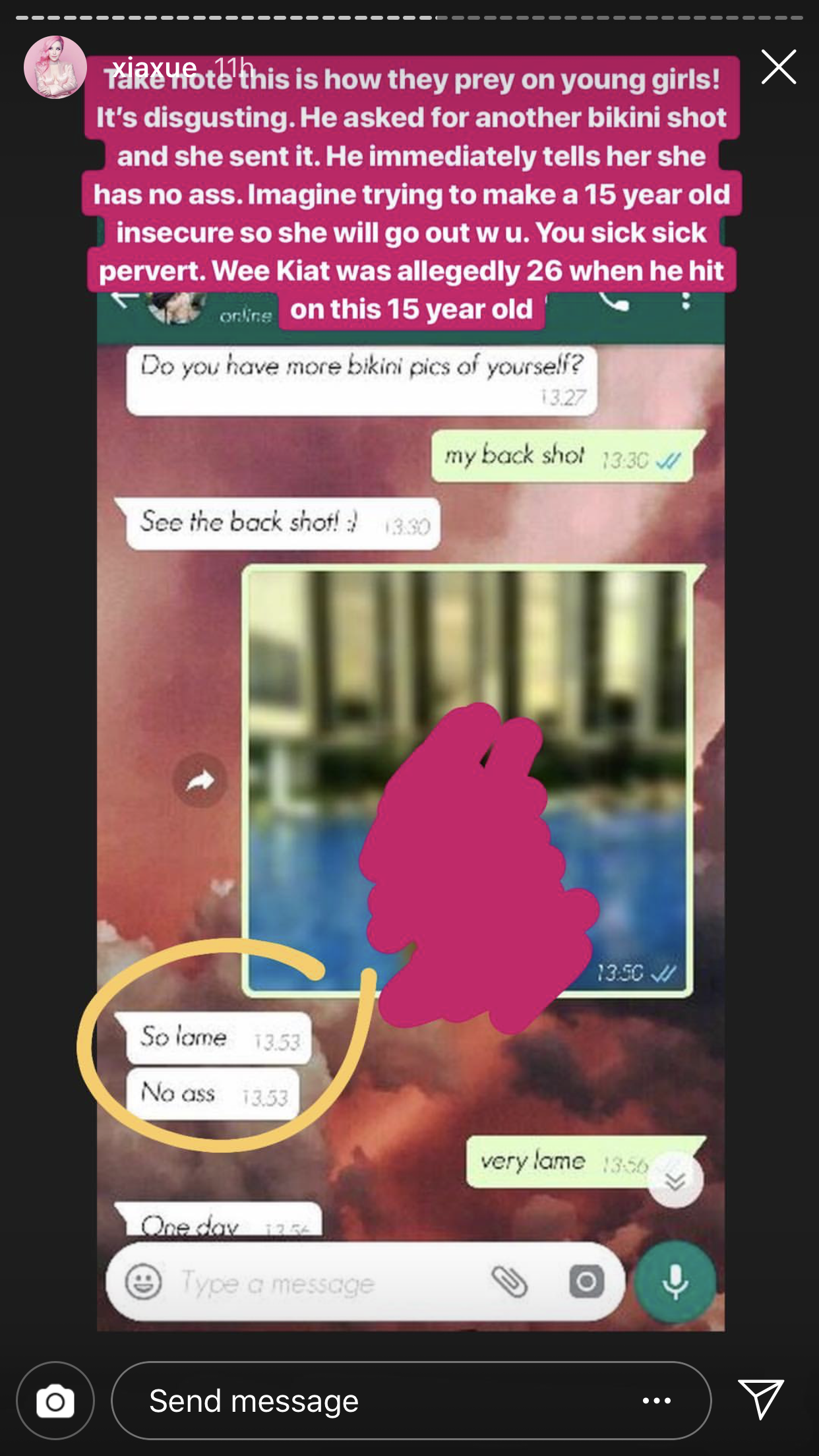 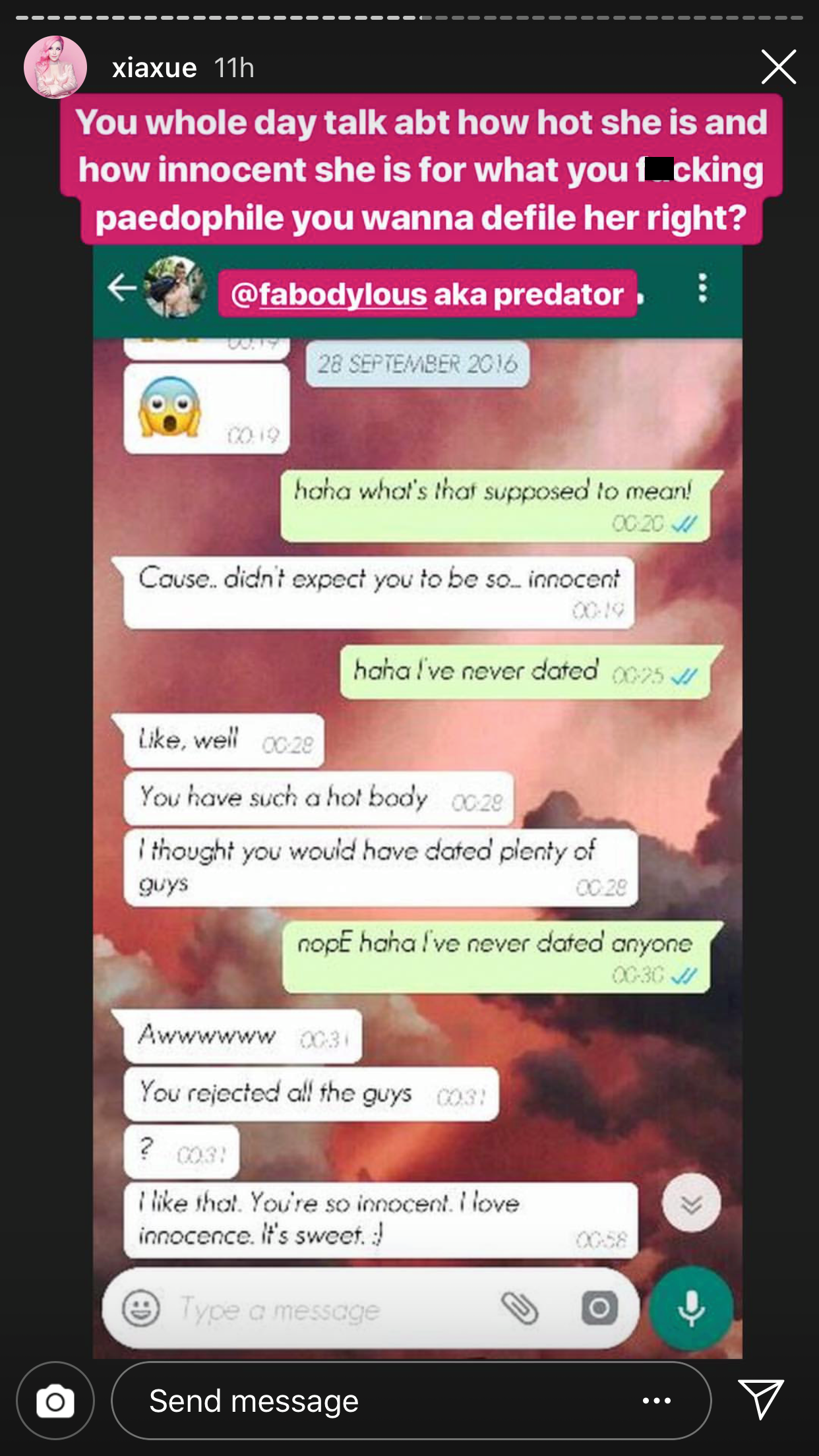 Objectively, these are pretty damning messages.

After Xiaxue posted the WhatsApp screenshots, Lai messaged her, denying that he ever sent the messages. 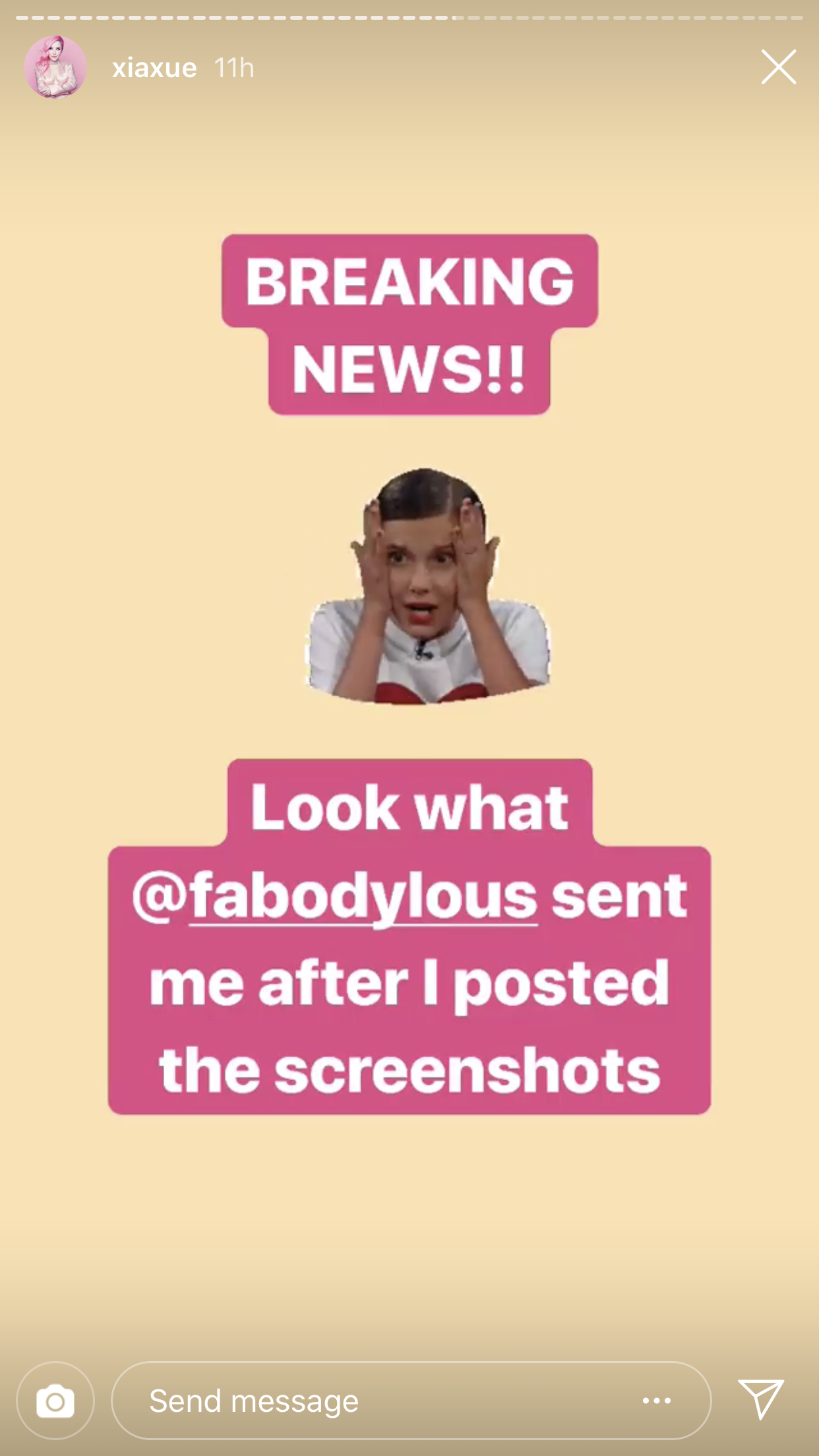 Here's the conversation between Lai and Xiaxue: 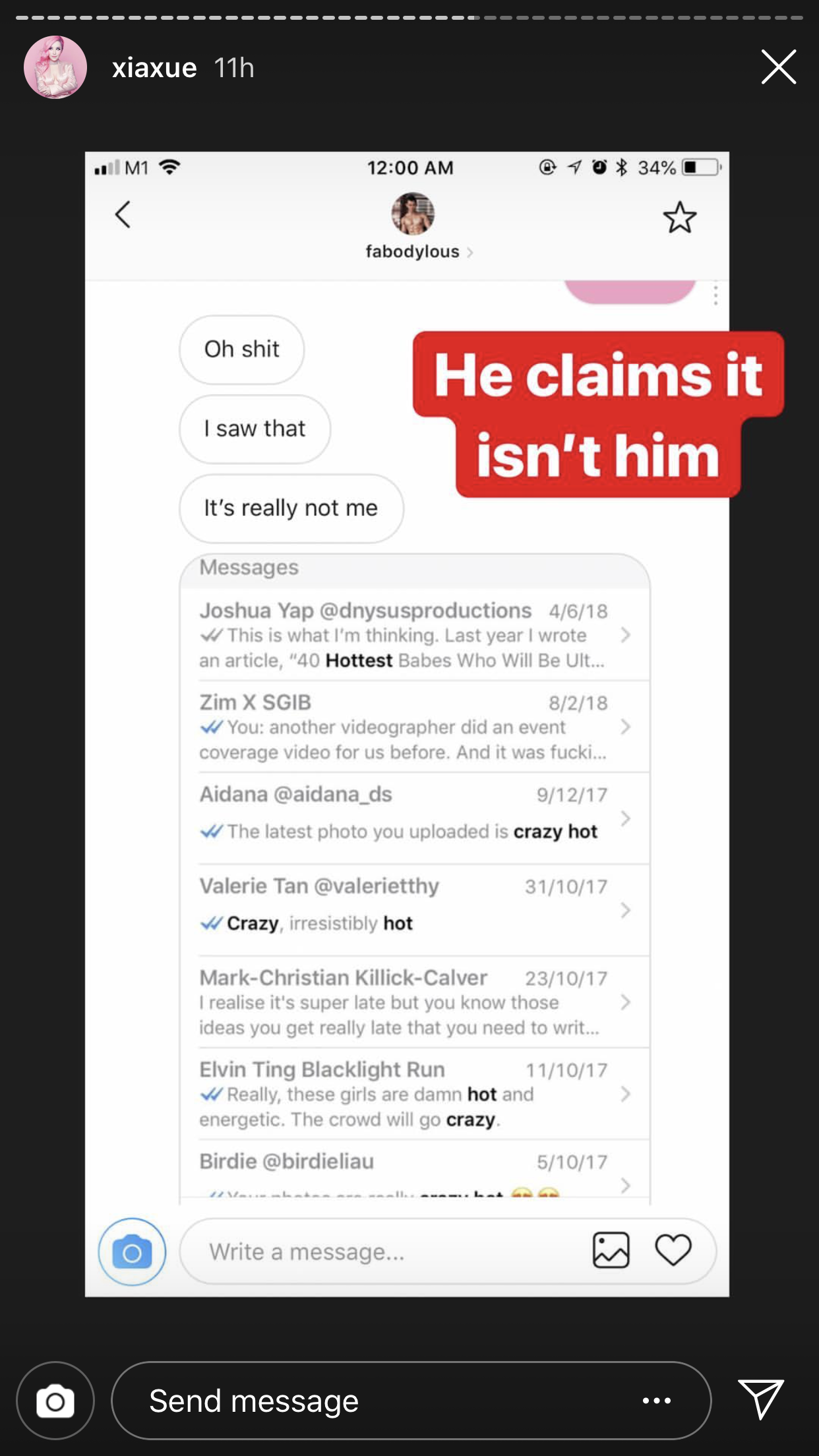 He even provided evidence in the form of an inbox screenshot, with the terms "crazy" and "hot" as search times. And thus tried to ascertain his mobile number: 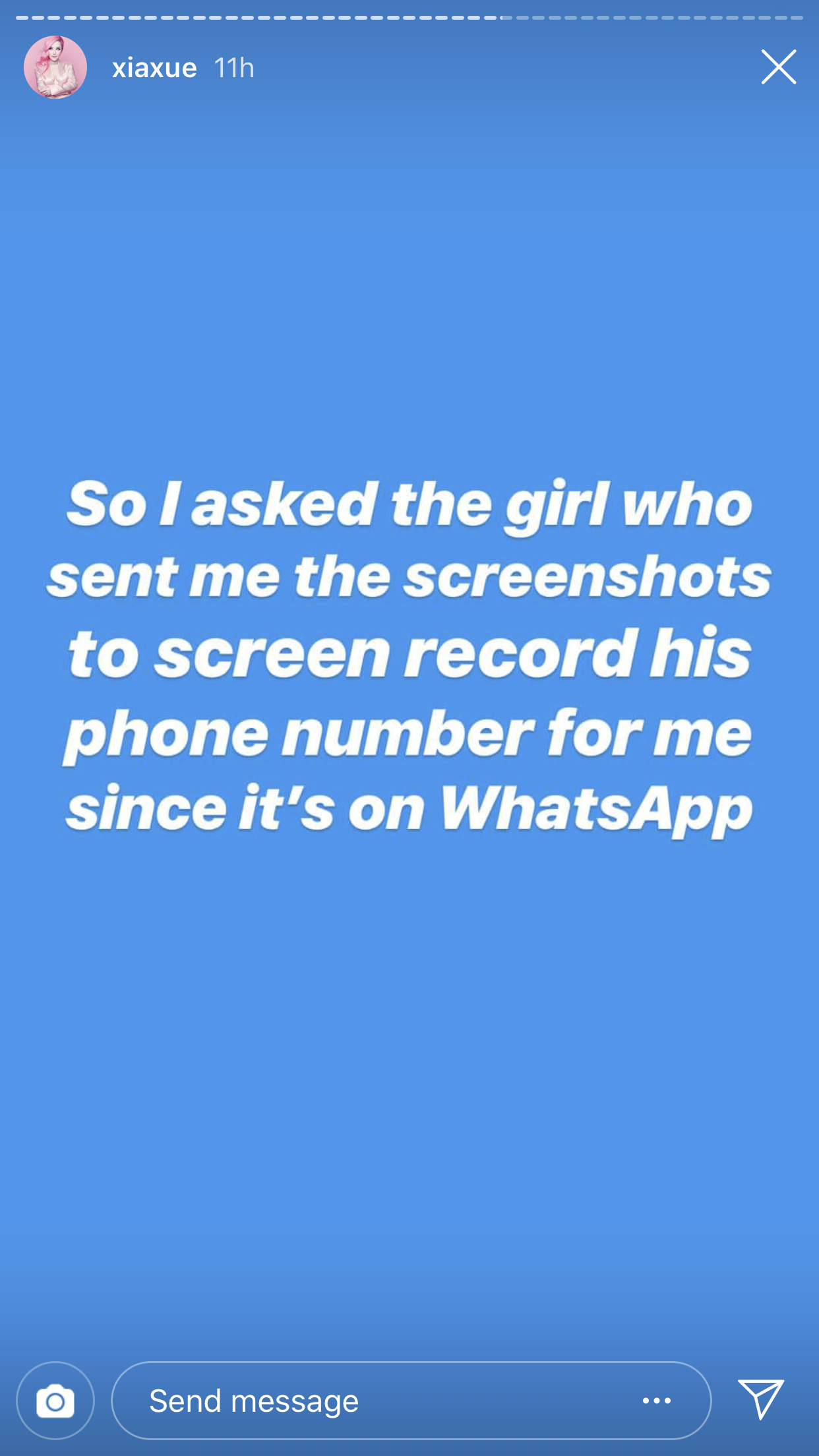 Xiaxue managed to uncover Lai's number from the girl he was messaging, but the former only revealed the first four digits: 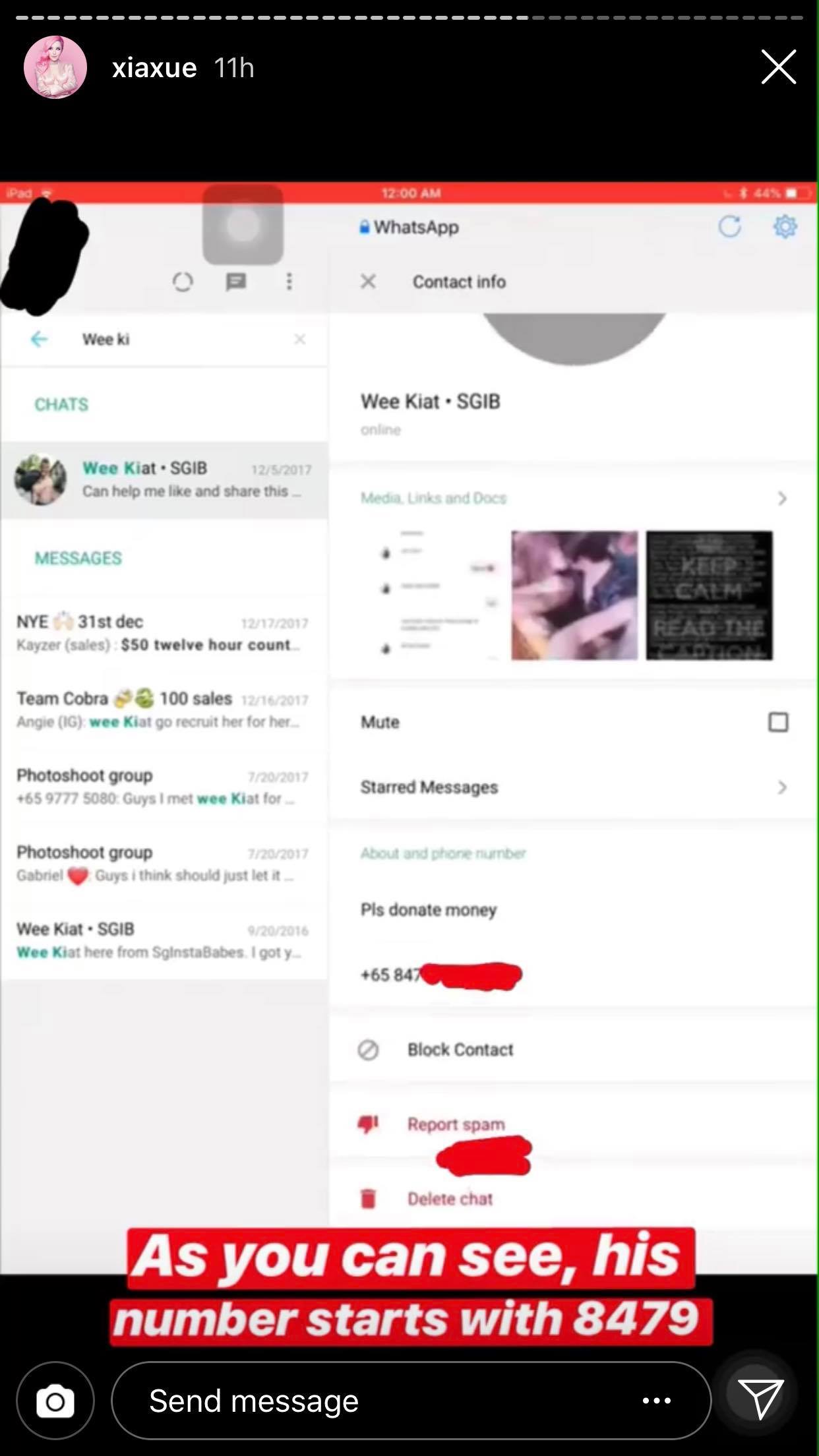 She then checked it against YouTuber Deekosh, who supposedly provided her with the same number: 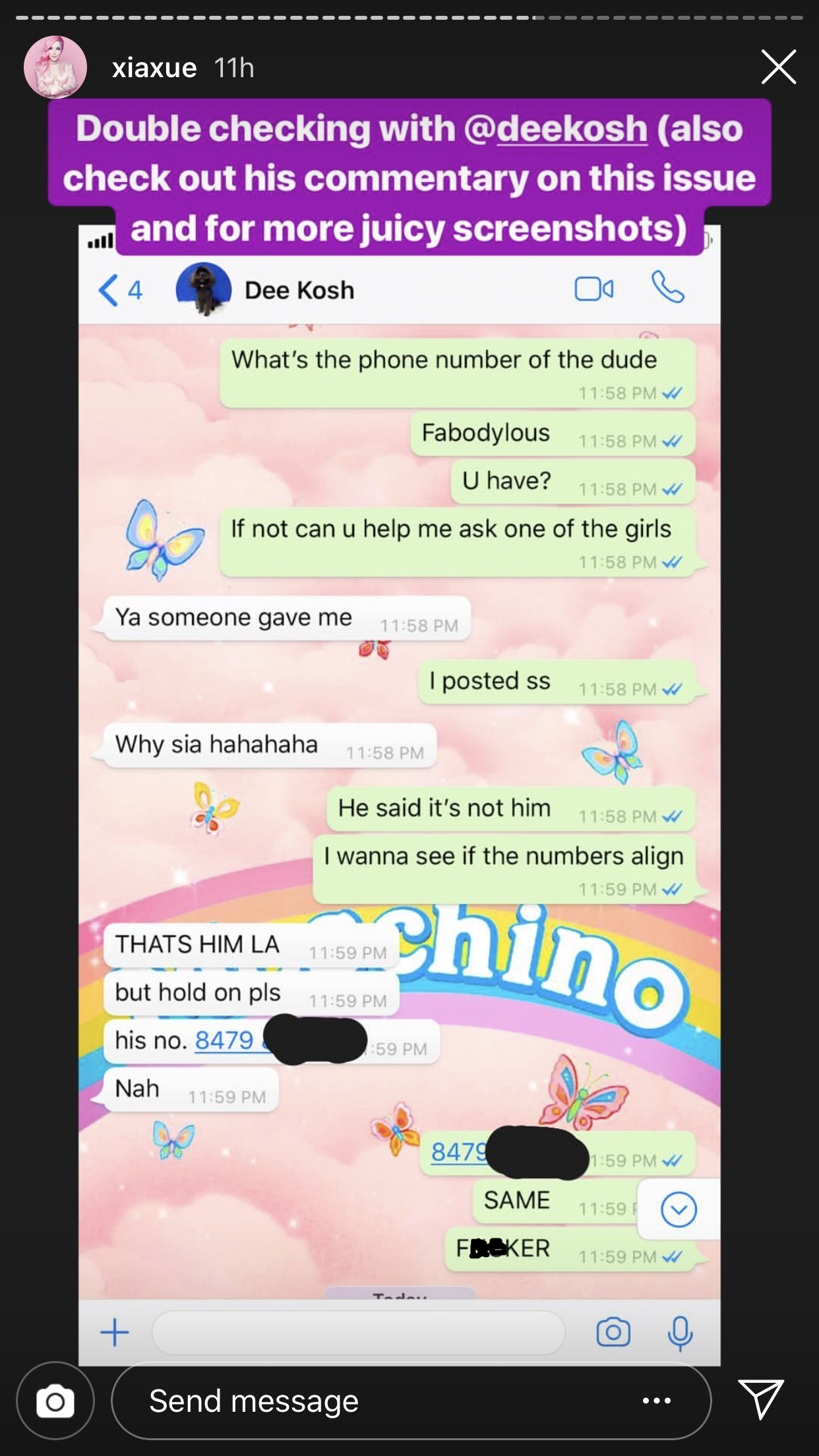 Lai claims he has "innocent intentions"

In the face of multiple allegations, Lai has supposedly maintained his innocence regarding the flirty messages and other accusations: 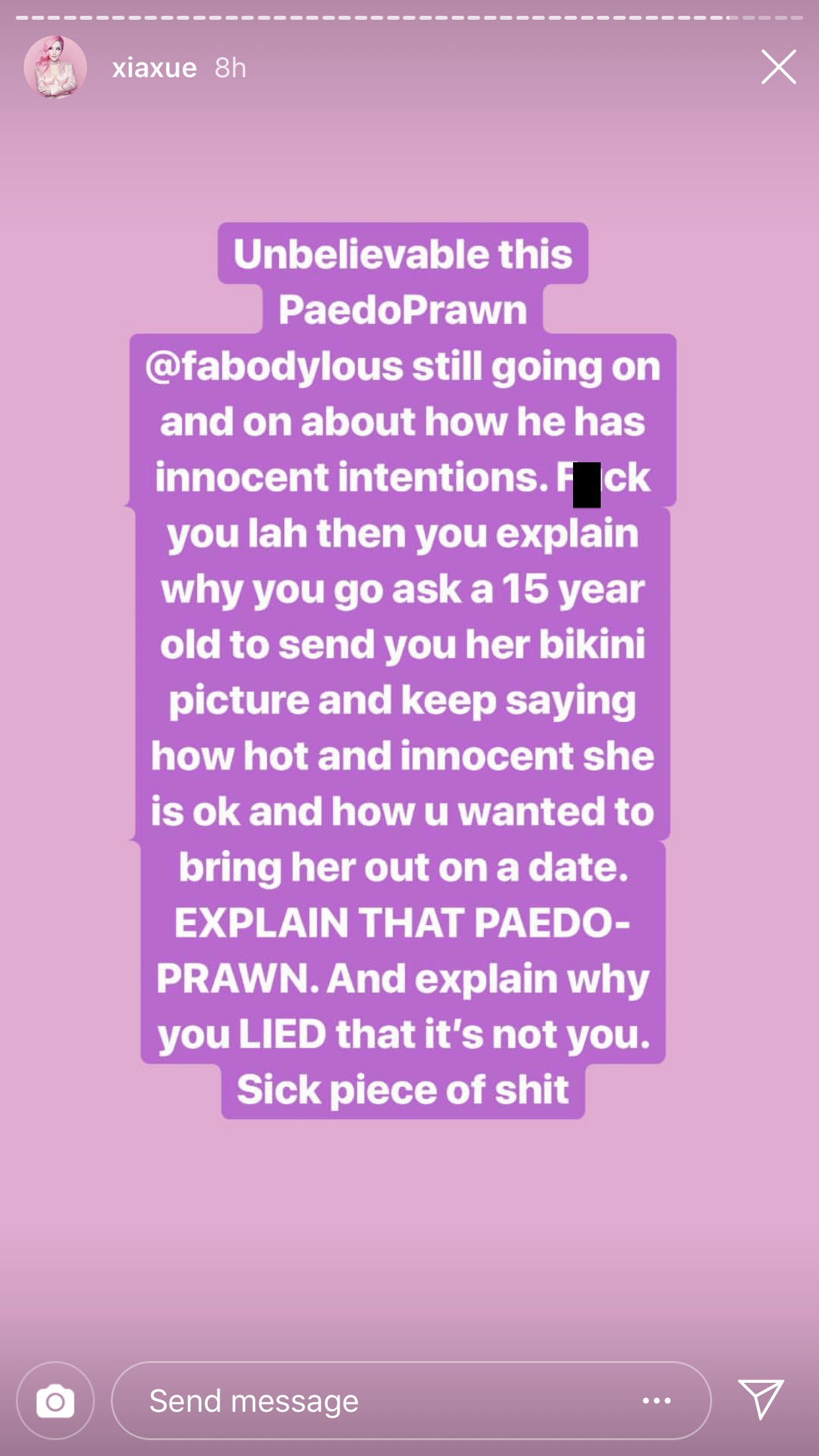 However, Lai had already deleted his messages that denied his involvement with the girl, claiming that his "lawyer" had asked him to "stay low": 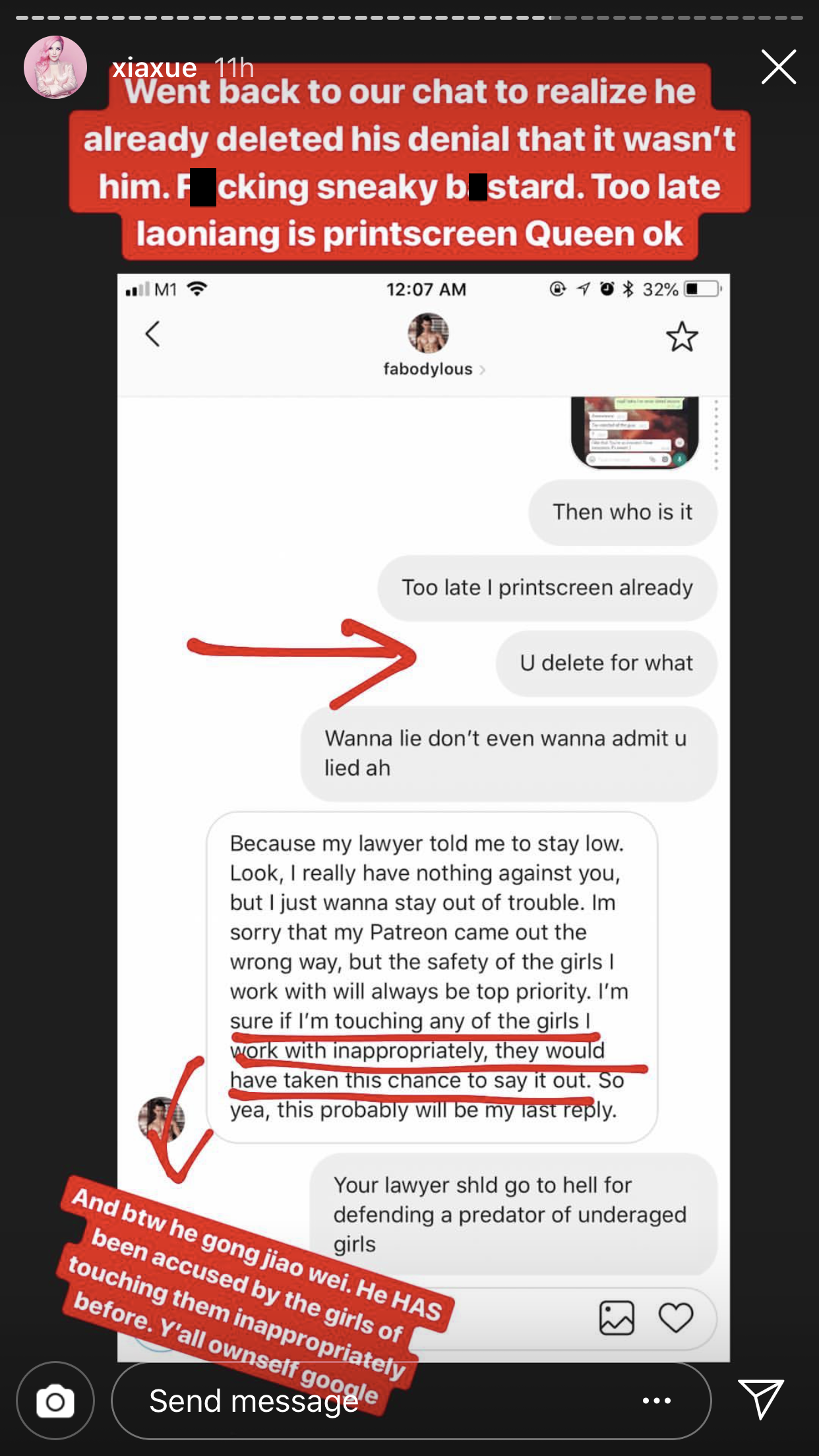 And proceeded to block Xiaxue: 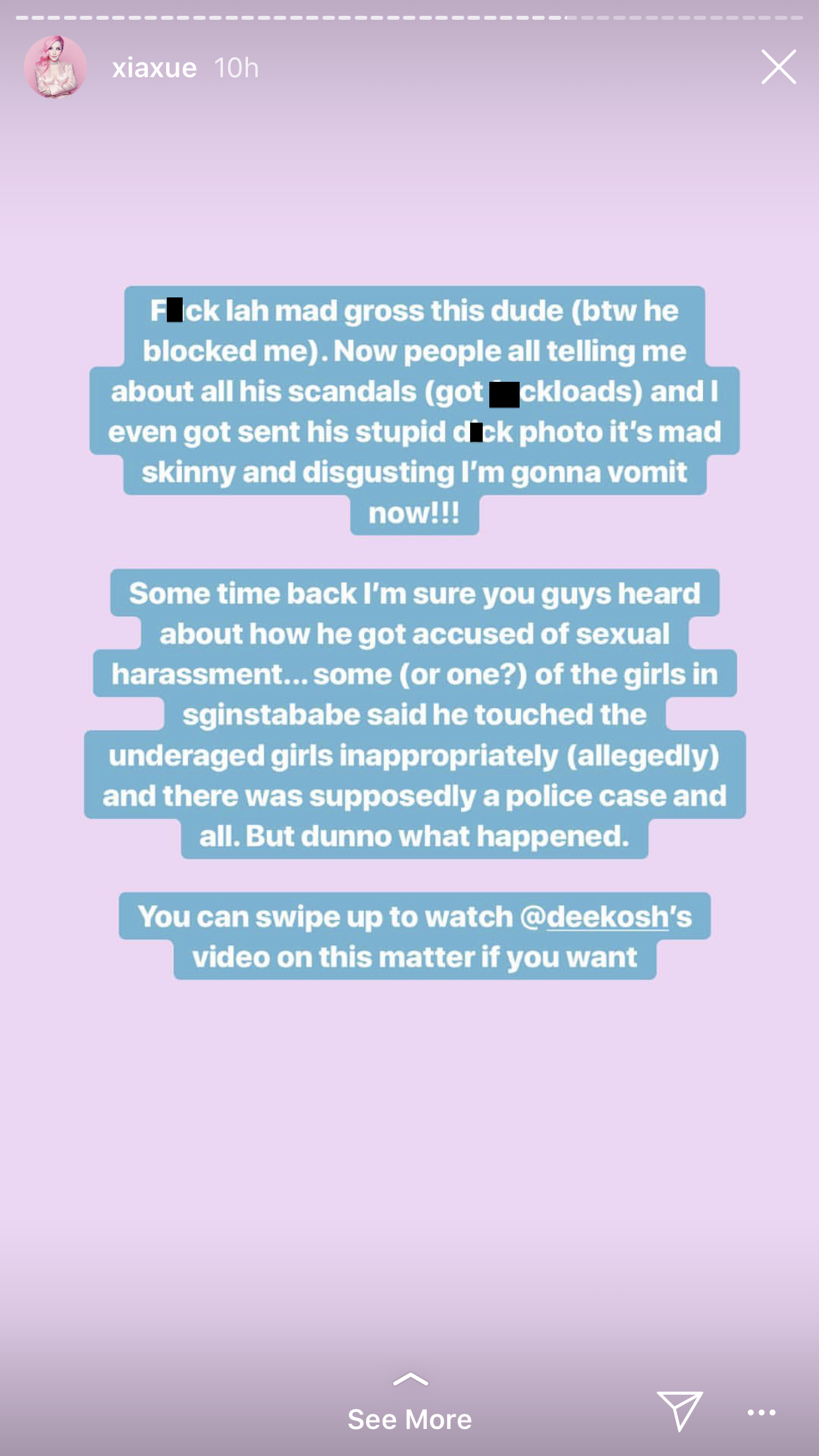 The previous allegations against Lai apparently prompted a "major revamp" for sginstababes, where only girls above 18 were used as models.

However, one of their current models is allegedly only 14 or 15 years old, but her photo has been deleted since this saga started, according to Xiaxue: 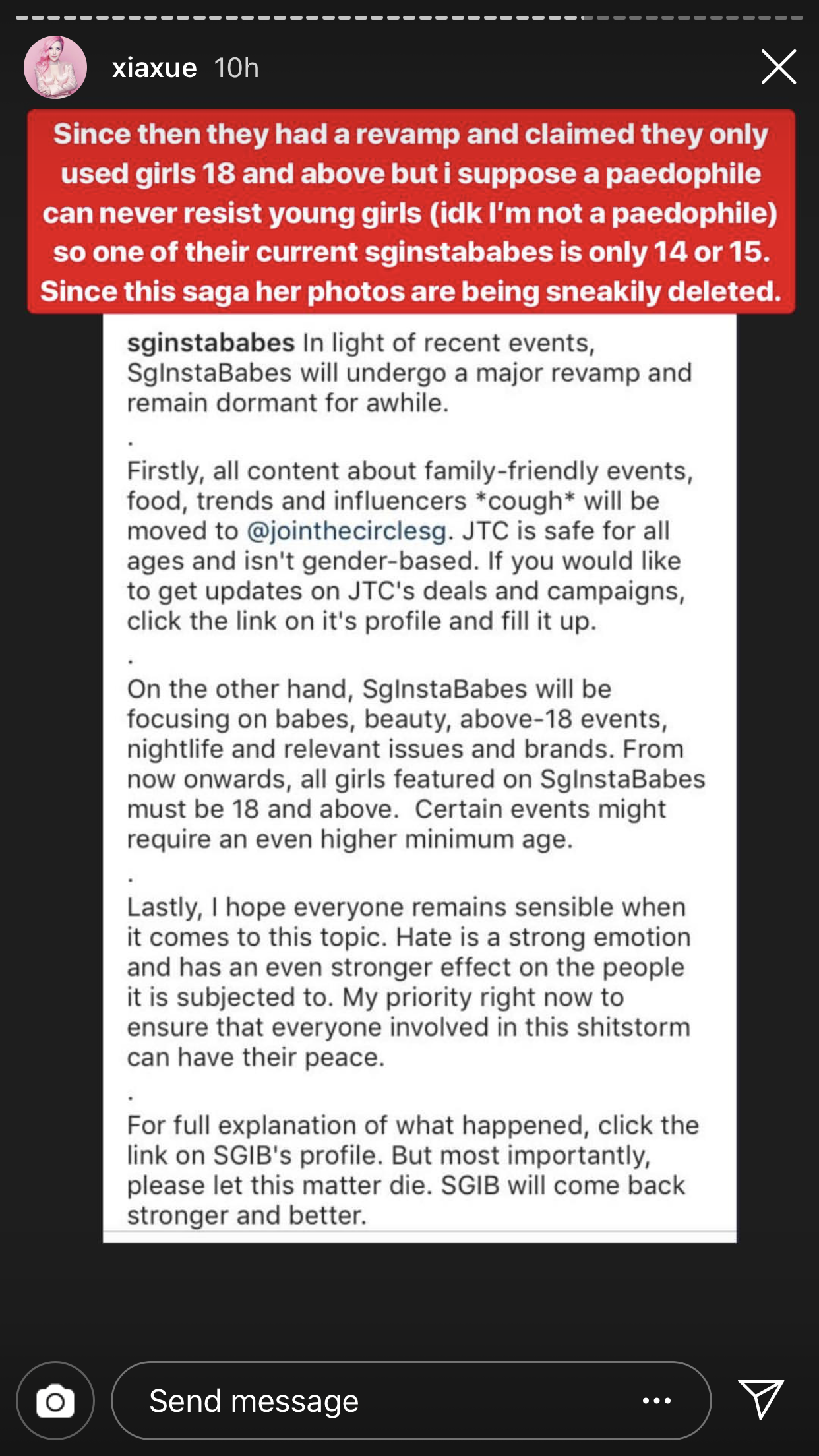 Nonetheless, Xiaxue managed to find a post belonging to the allegedly underaged girl, posing in a bikini and tagging Lai in the photo: 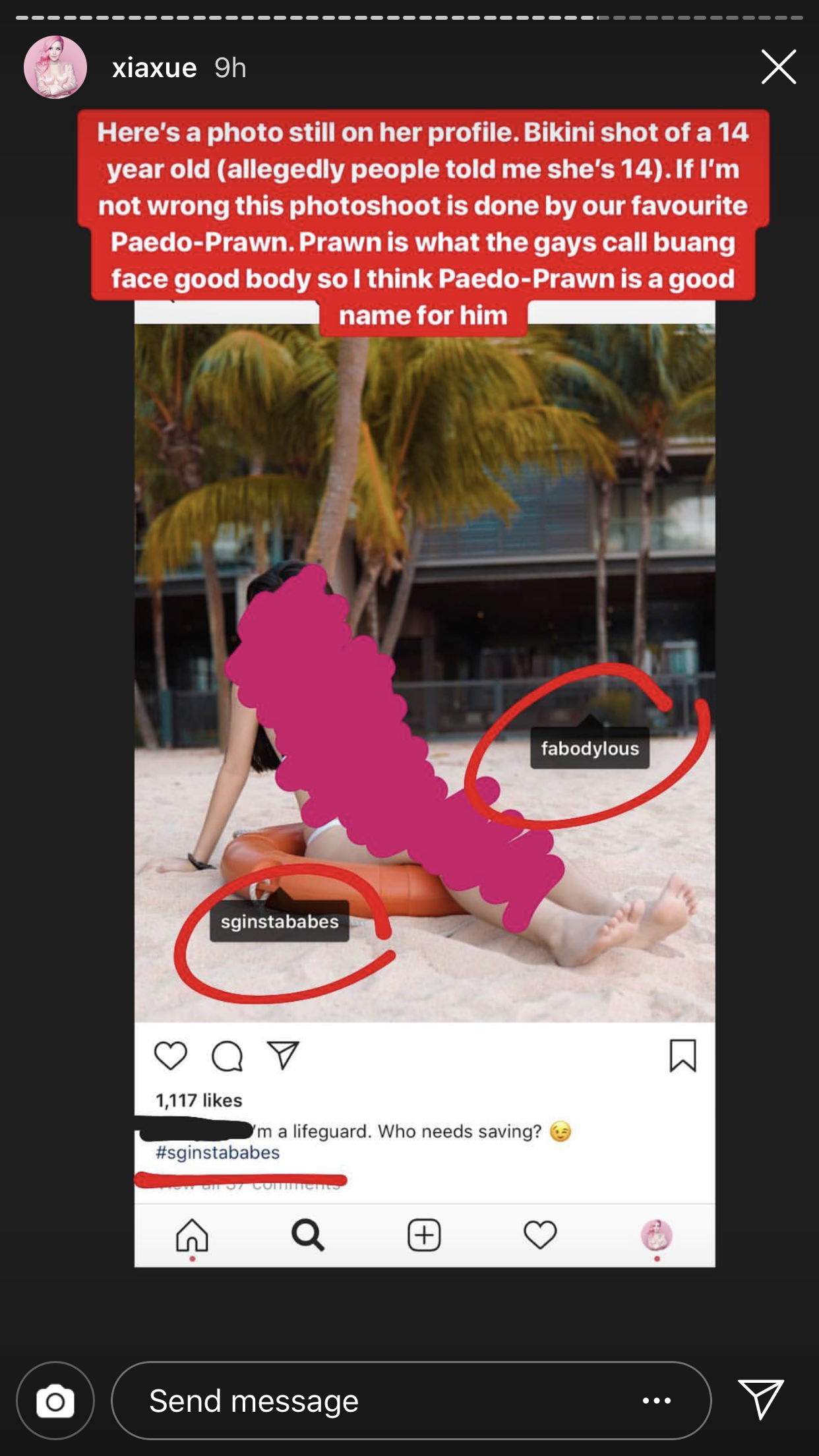 The post's caption also had the hashtag #sginstababes.

Xiaxue also shone a spotlight on a supposed sex photograph leak involving Lai and a girlfriend: 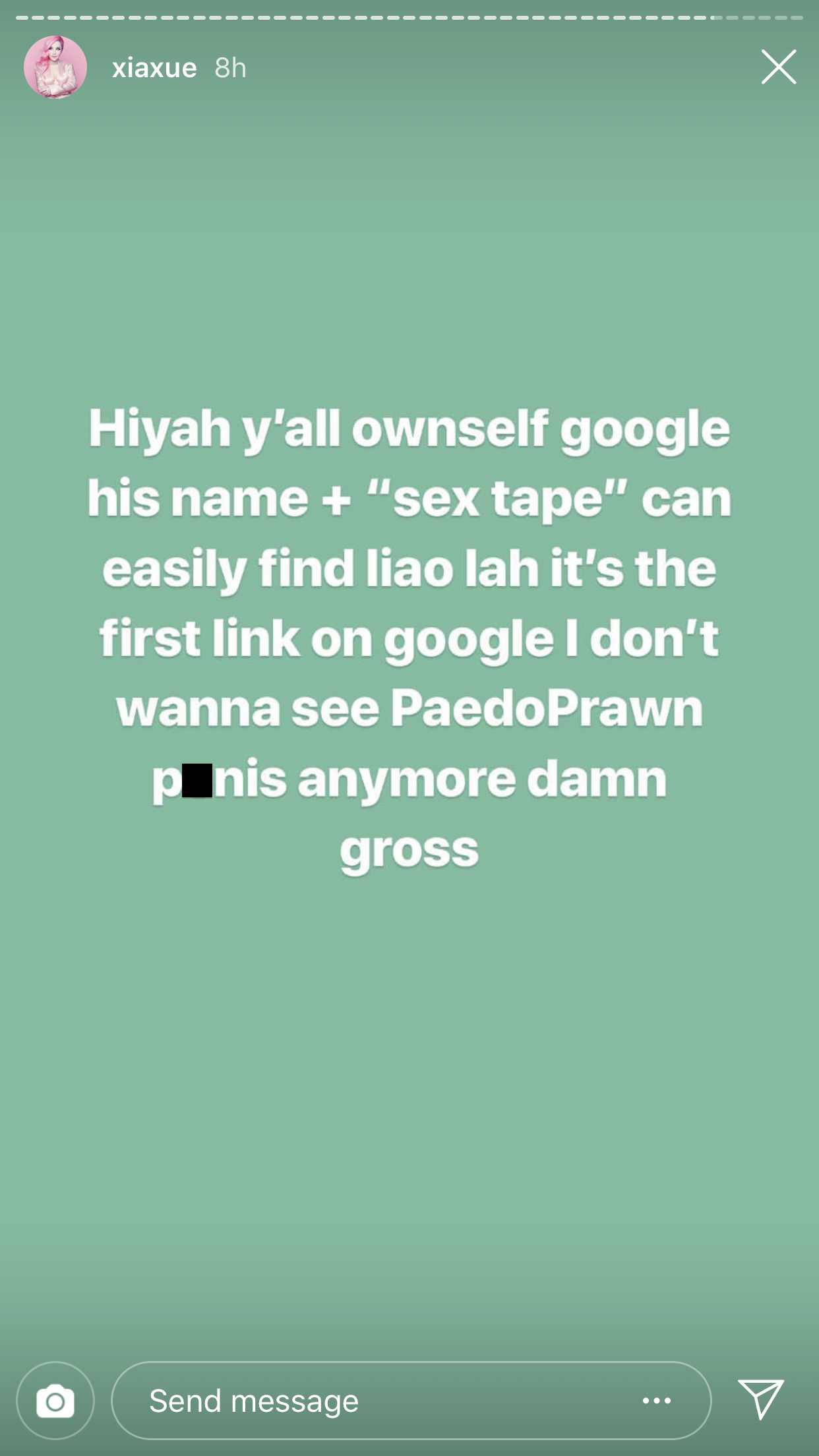 But Lai accused that girlfriend for leaking the photographs to a modelling agency: 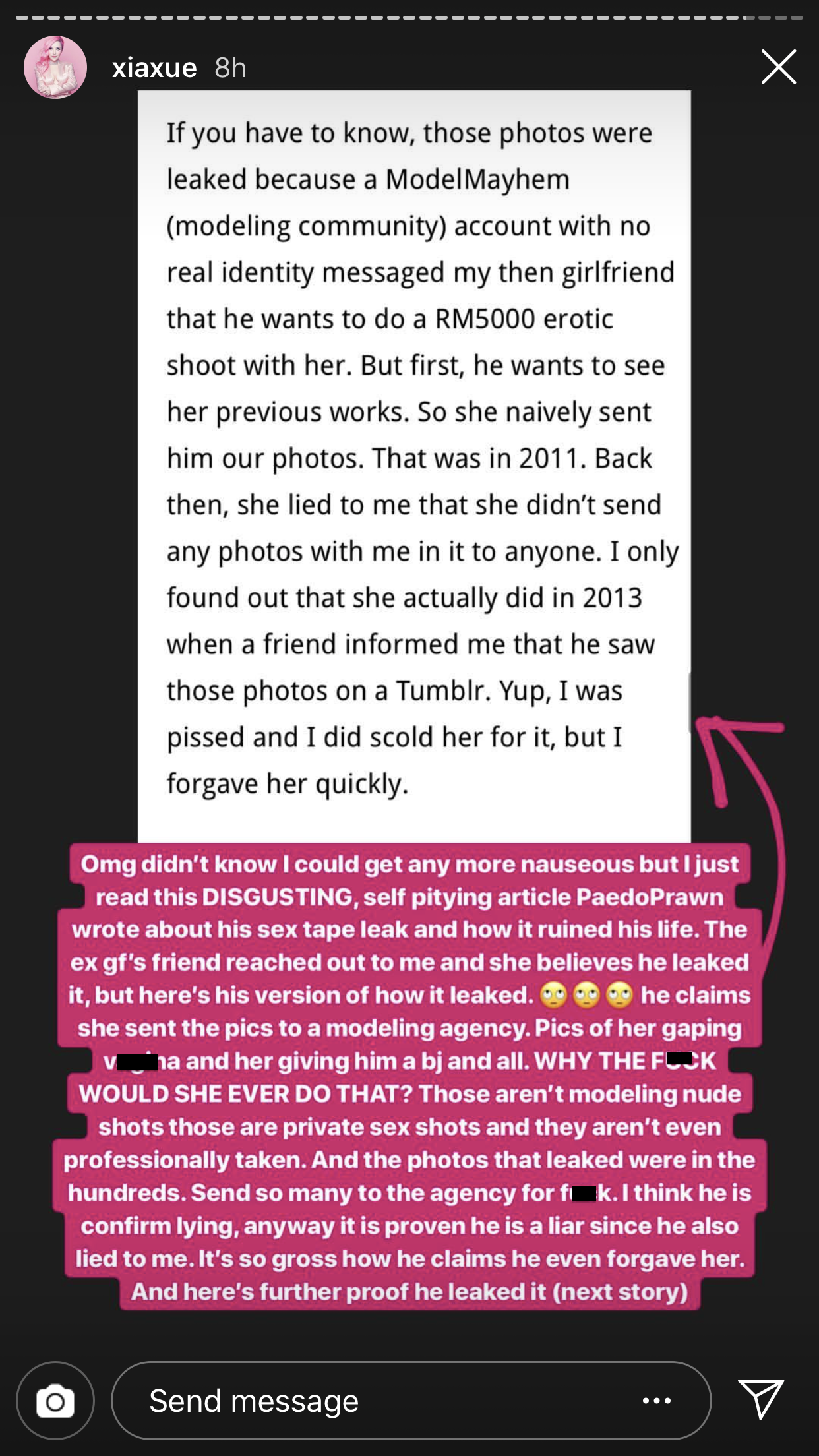 The leaked photographs were reported before and Lai had said he had a "huge anaconda." Xiaxue who said she saw the photographs said it was more like a geoduck. 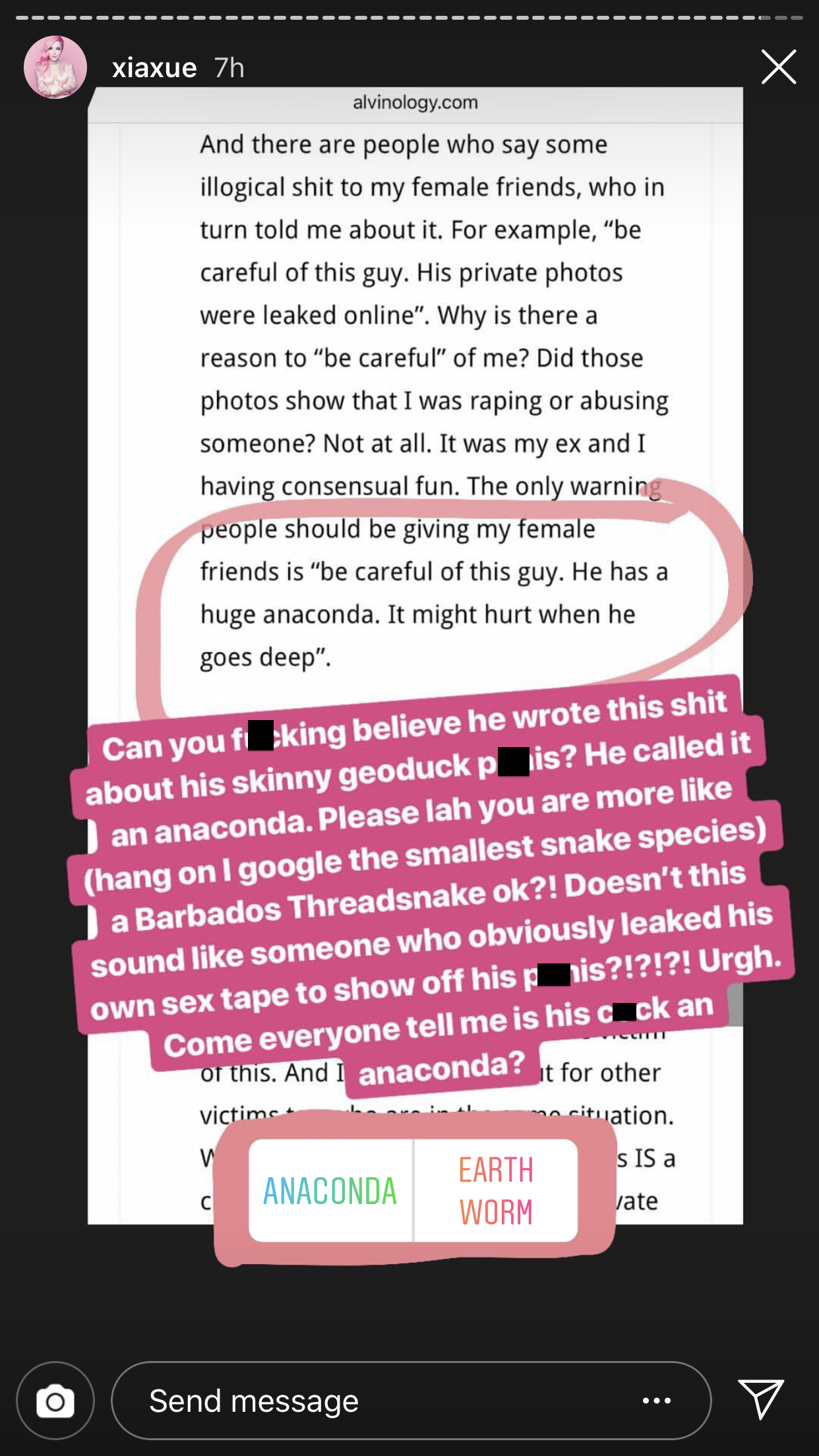 In case you're wondering what a geoduck is: 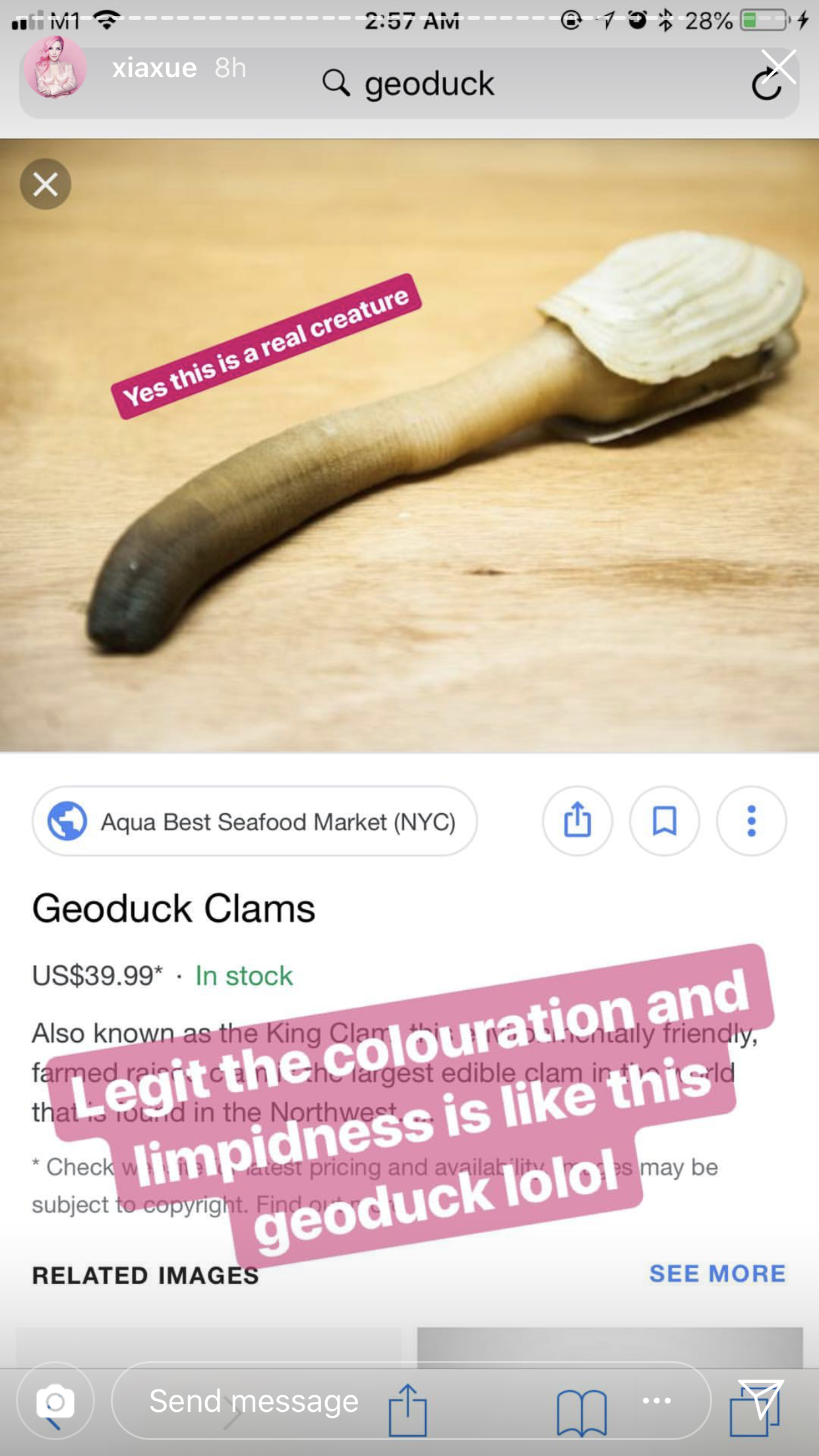 Right before Lai deactivated his account, Lai continued to justify why he shoots bikini photos of girls under 18.

It is apparently because it makes the girls feel good about themselves: 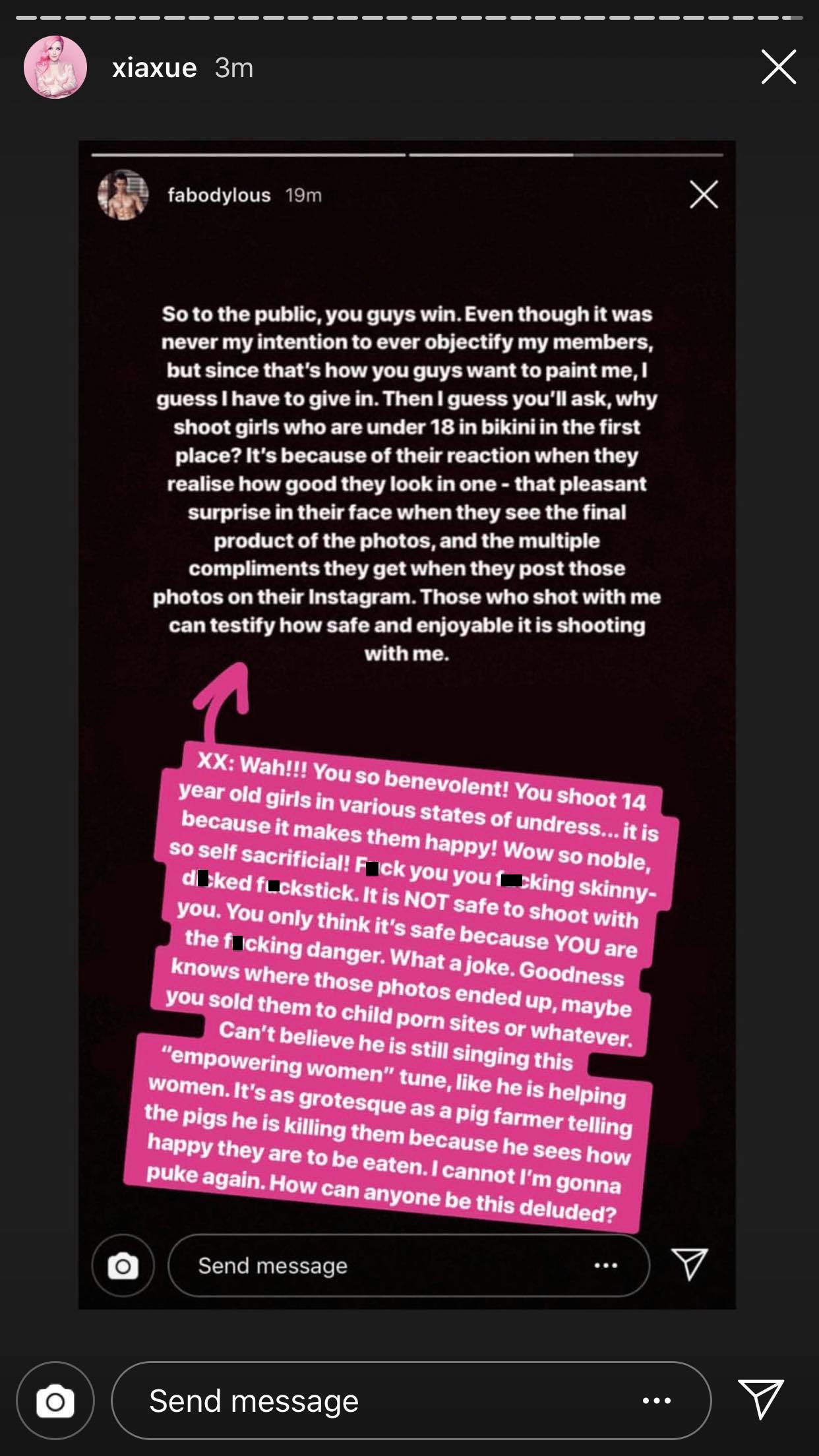 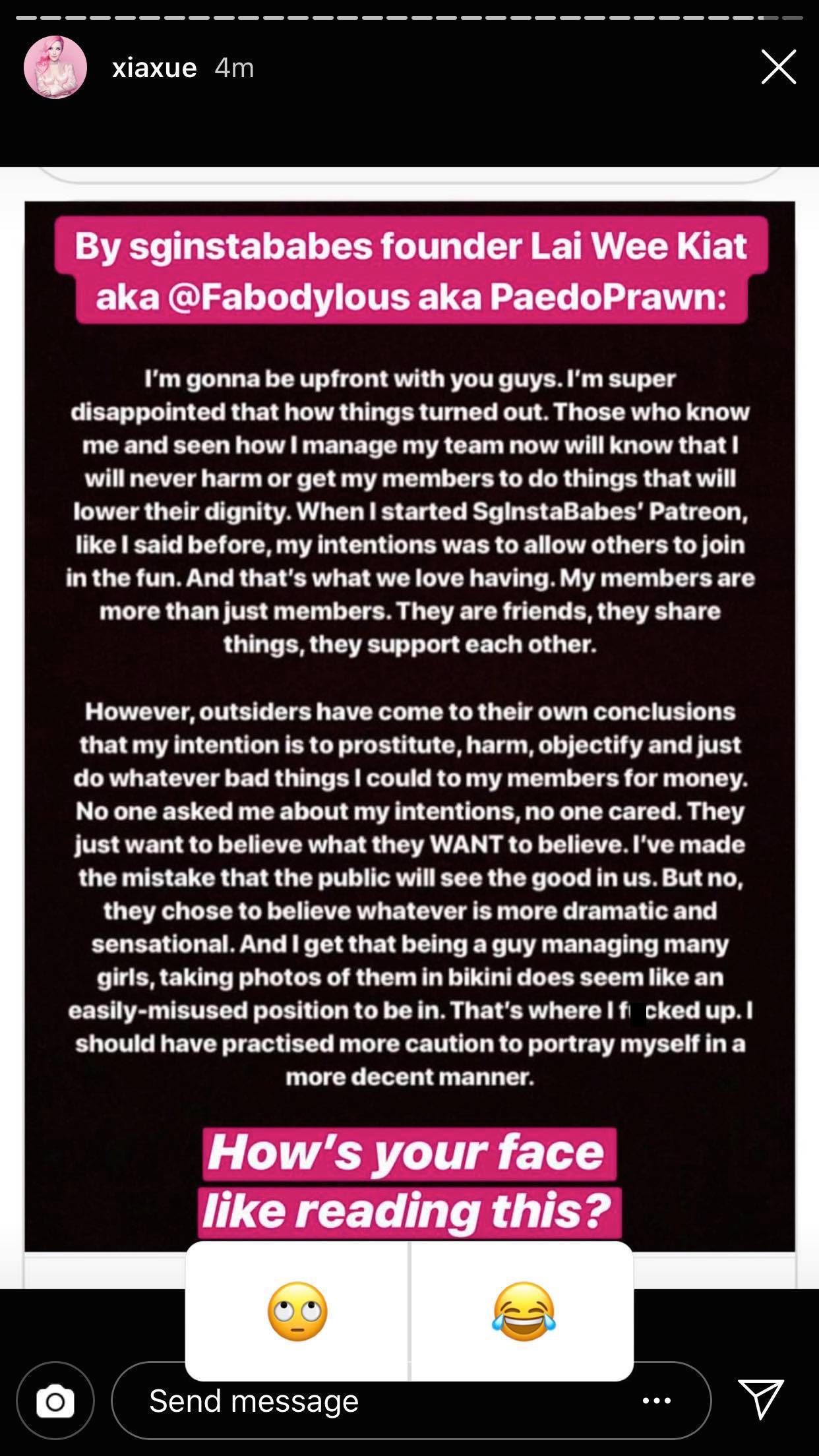 Since Lai was thrusted into the limelight, many more girls have apparently come forward with more sleazy incidents involving him: 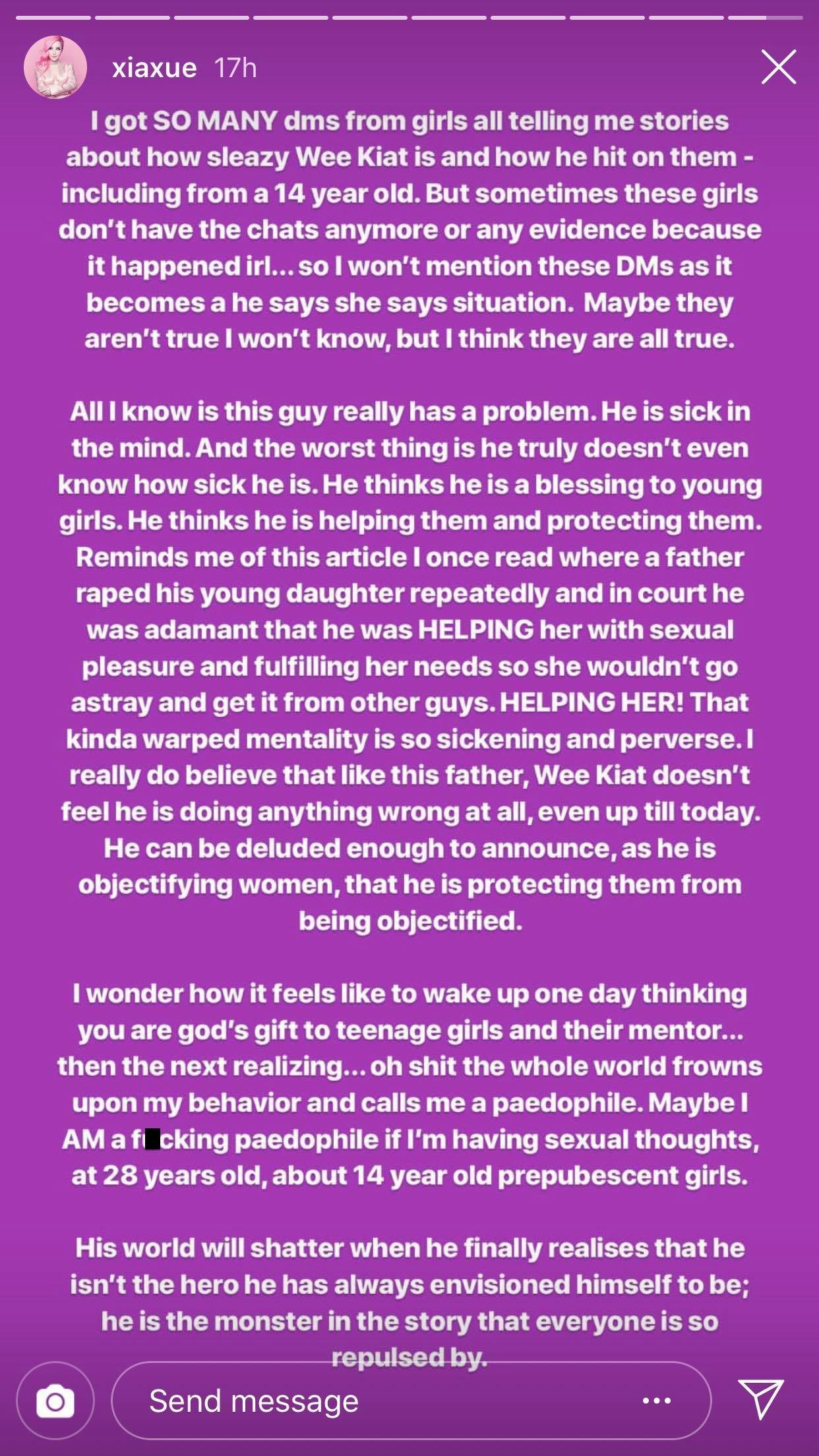 We have reached out to Lai for his comments on the only  publicly available platform — his website.

We have yet to receive his response, but will update the article when he does.