If you've been through higher education, like polytechnic or university, you'll know the fees can be pretty hefty — they can go from under S$10,000 for polytechnic diploma courses to upwards of S$50,000 (for a Singapore-citizen-subsidised dentistry course at NUS, for instance).

Not all of us can afford to fork out the cash just like that, and not all of us do well enough for scholarships or qualify financially for sponsorships from various charitable organisations.

One way to foot the bill, therefore, is the Central Provident Fund (CPF) Education Scheme, which allows parents with healthy CPF savings accounts to use some of the funds saved to pay for their children's school fees.

Here's how the CPF and using CPF money works:

In short, every Singapore citizen and permanent resident has a CPF account. This is how the Singapore government makes everyone save money they earn for their retirement, and there are different types of accounts that earn different levels of interest on the money saved in it.

For most of us who work, 20 per cent of our salary is deposited into the account every month, and our employers deposit an extra 17 per cent of our pay into our accounts too.

So with this money, the bulk of it is growing at 2.5 per cent per year — in other words, more than what you could get putting it into your regular bank account.

This means if you take any of it out for any purpose (whether it's to pay for a house, or for your child's or relative's education), you will eventually need to put the money back into your account so it can continue to grow as it was supposed to, so you will have enough savings when you retire.

That's why if a parent took out, say, S$7,000 from his or her CPF account to pay for their daughter's polytechnic diploma course, she would have to pay it back with interest when she starts working and earning money so the parent doesn't lose out on the interest they could have gained from not loaning out the money in the first place.

You must be wondering why, at this point, we are taking the effort to explain this to you.

A girl going by the name Nadiah Ash found herself in the unpleasant predicament of paying back the money taken from her mother's CPF account to pay for her school fees, and took to Facebook to complain about it.

Here's a summary of what she said:

- Her mom paid for her polytechnic course using her CPF funds.

- When she graduated with her diploma, she received letters from CPF reminding her to pay back the amount she had taken from her mother's account, with the 2.5 per cent interest she should have earned on it.

- She then applied for deferment on paying it off, as she was going on to university.

Things then get a bit unclear as we don't know if she has started working or is still in university, or doing both at the same time. But she continues:

- CPF continued sending her letters reminding her to pay up. She said it felt like she was being harassed by loansharks, adding later that they are "worse than loansharks".

- She went to see her "Constituency Minister", who wrote an appeal letter on her behalf but it was rejected.

- She went with her family to the CPF office to "see what can be done" but found the staff there "more than unhelpful".

She also asked the following questions:

- Why she can't pay her mom's CPF account with her own CPF money.

- Why they can't just decide not to pay back her mom's CPF account if her mom is fine with it, since "it's her savings, her money".

- Why, she alleges, they were not made aware of the need to pay the money back when they chose the CPF option.

And finally, she complained also about the CPF officer, whom she said was "unhelpful" and "rude". Even though she mentioned that he advised her to pay instalments to her mother's account until she turned 55, upon which time the decision can be made to waive the interest incurred — provided she has at least S$171,000 saved in her retirement account.

She concluded with this statement:

Her complaint then got amplified by others commenting on her post:

And it was pretty clear that there was some level of confusion about this requirement:

The solution Nadiah volunteered to this collective confusion: "more people... to voice out [sic]": 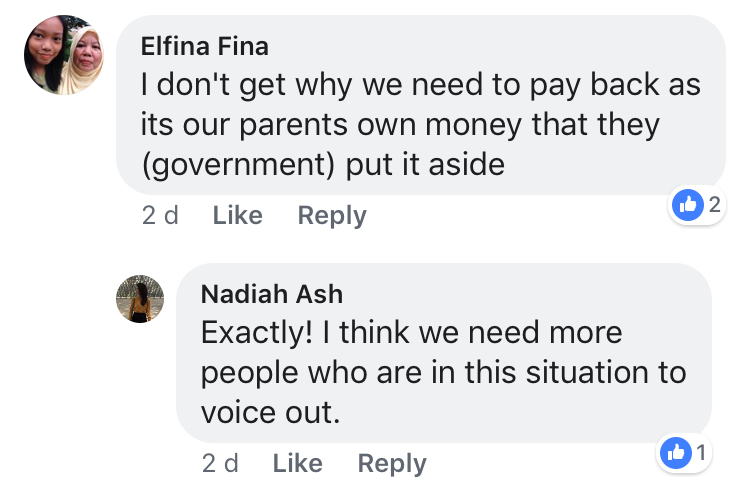 And yet others were using Nadiah's post to educate their friends about this:

There was even this clincher — complete with added common false things said about the use of our CPF savings, and rounding it off with the closer "Maybe in [sic] wrong but who cares.":

Thankfully, there were some on the thread who helped to explain things, and even volunteered several options available.

1) Explaining, in as simple terms as possible, why she has to pay it back:

2) Option 1: Pay small instalments (even S$100 per month is good enough) until mom turns 55 and can waive the repayment — provided she has enough in her account

We note that the CPF officer also shared this piece of information with her, as she also mentioned in her original post.

Here are more details on that:

2) Option 2: Pay part of it off using your Post-Secondary Education Account (PSEA)

Clicking this link will trigger a download of the aforementioned application form, which you can fill up and send in.

Depending on what you've used your PSEA funds for so far, though, you may not have enough to cover the entire sum, under which circumstance you'll still need to pay the balance to your parent's CPF account. With the interest they would have earned in the time their money was loaned to you.

One parent also gave his point of view about this:

The moral of this story? Make sure you have studied something fully before complaining about it online.