The second phase of the water price increase has kicked in on July 1, 2018.

This completes the hike in the price of water by 30 percent.

The increase in price was spread out over two phases, the first of which took place on July 1, 2017.

When was it announced?

What will the hike entail?

Households using more water, that is above 40m³, will be charged a higher rate to discourage water wastage. One cubic metre is equal to 1,000 litres.

• 75 percent of HDB households should see an increase of less than S$12 a month in their water bills.

• Households in one-room and two-room flats will not see any increase in their bills.

In 2018, some 900,000 eligible HDB households will receive one GST Voucher − U-Save benefit per HDB flat, based on the flat type.​

An additional U-Save of S$20 a year from 2019 to 2021, which will help to offset utilities bills, will also be distributed.

Only HDB households are eligible for the GST Voucher –​ U-Save benefit.

Is there a reduction of water used in Singapore?

Yes. The reduction comes in the wake of the hike in water prices.

Each person in Singapore used 5 litres less water a day in 2017 than 2016 -- a sharp drop that exceeds the government's 2020 per capita water use target.

This means the government target of 147 litres by 2020 has already been achieved.

There are three components to the water price in the monthly bill: Water tariff, water conservation tax and waterborne fee. 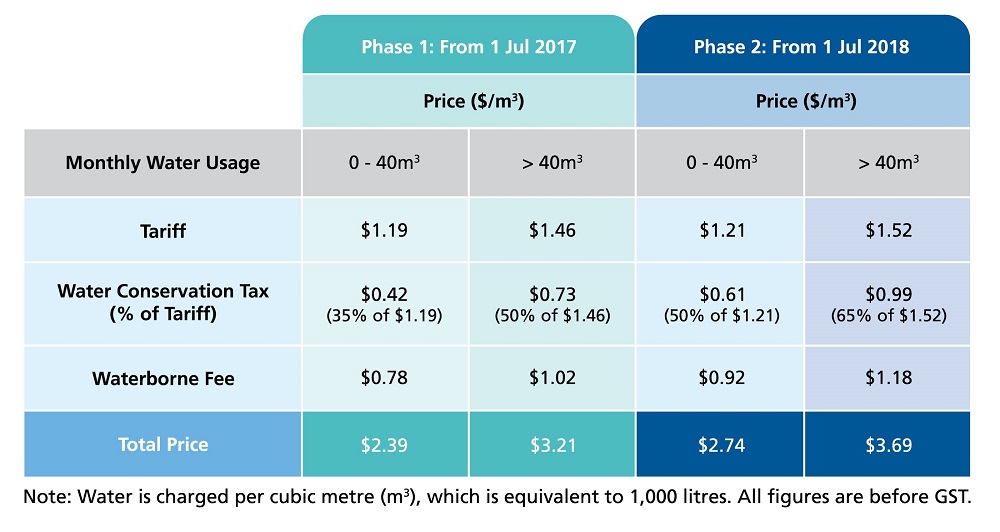 The Water Tariff covers the costs incurred in various stages of water production process — collection of rainwater, treatment of raw water and distribution of treated potable water to customers through an extensive island-wide network of water pipelines. The Water Tariff is charged based on the volume of water consumed.

The Water Conservation Tax (WCT) was introduced in 1991 to encourage water conservation and to reflect its scarcity value. WCT is imposed as a percentage of the water tariff to reinforce the message that water is precious from the very first drop.

Every drop of used water is collected via a separate network of sewers and channelled to the water reclamation plants for treatment, after which it is further purified into NEWater or discharged into the sea.

The Waterborne Fee (WBF) goes towards meeting the cost of treating used water and maintaining the used water network. It is charged based on the volume of water usage.