Historian Thum Ping Tjin was recently in the news for his marathon six-hour hearing session at the Select Committee for Deliberate Online Falsehoods. "Another from the archives:

Hmmm... now I'm wondering just how much of what Singaporeans believed to be LKY's vaunted global reputation was actually manufactured by the government-controlled media, in the days when there were no alternative news sources?"

In response to this, someone by the name of Bryden Cch commented on his post, sharing a YouTube video of the Lee delivering the speech in Congress in 1985.

The post was referring to time stamps in the video.

Here are GIFs of two of those timestamps:

"EDIT: a comment below points to a youtube video of Lee's speech, which does indeed draw a standing ovation at the close (but the video does not show the opening). I'll see if I can dig up the IHT article to see if it reported the speech accurately. The ST report is at http://eresources.nlb.gov.sg/newspapers/Digitised/Article/straitstimes19851010-1.2.2 ." 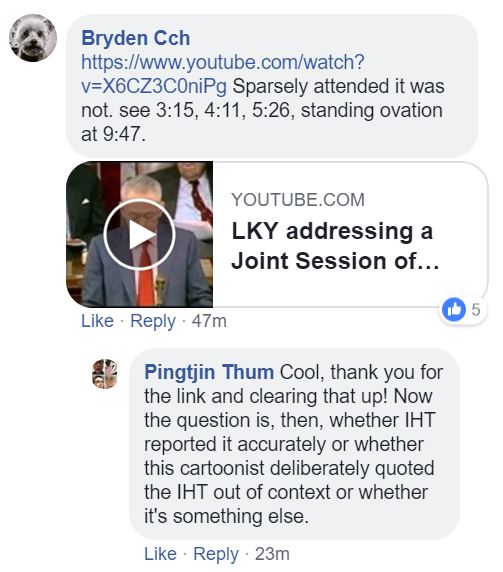 Here's the YouTube video of the speech for you to decide if IHT (which stands for International Herald Tribune) is correct in its description of "sparsely attended" and "polite applause":