The historic meeting began at 9 a.m at Capella Hotel on Sentosa.

Kim Jong-un's motorcade arrived at Capella Hotel seven minutes earlier than Donald Trump's. This was a sign of respect from a younger person to an elder person in Korean culture, according to Ching-Yi Chang, the Shanghai Media Group White House correspondent.

Kim Jong-un and Donald Trump shook hands in front of a wall of North Korean and American flags. The handshake lasted around 12 seconds, but Trump kept his iconic handshake style at bay. 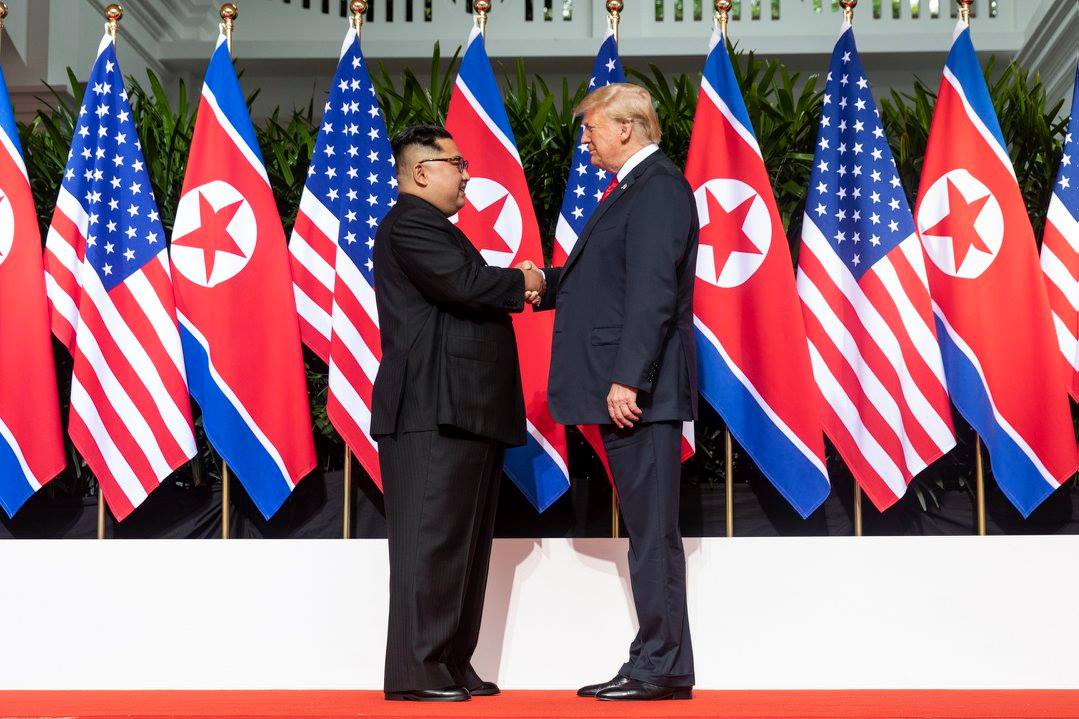 "Nice to meet you, Mr. President." Kim said in English. These were the first words exchanged between a North Korean leader and an incumbent American President since the 1953 armistice that ended hostilities between the two Koreas and the Cold War powers behind them.

Kim continued via his translator: "Many people in the world will think of this as a form of fantasy from a science fiction movie."

Trump and Kim then sat down for a photo op.

"Well, it was not easy to get here. The past worked as fetters on our limbs, and the old prejudices and practices worked as obstacles on our way forward." Kim said while with Trump.

"That's true," Trump said before extending his hand for another handshake.

The two leaders first went for a 40-minute one-to-one meeting and then an extended bilateral meeting with the entire American and North Korean delegation. During the one-to-one meeting, Trump and Kim were seen conversing while strolling the corridors of the Capella Hotel.

News 7 reported that journalists on the sidelines thrice asked Kim between the meetings whether he would denuclearise. “Chairman Kim, will you denuclearize?” They asked twice. Kim did not answer. And they asked again: “Mr. Kim, will you give up your nuclear weapons, sir?” Kim ignored the questions.

Trump's delegation included John Bolton, who has taken a backseat after North Korea blasted him for suggesting the "Libya model" as an endgame for North Korea.

In 2003, Libya unilaterally gave up their nuclear arsenal in an agreement with the United States. Eight years later, the US joined other European countries to intervene in the Libyan Civil War, during which Libyan leader Muammar el-Qaddafi was killed by rebel forces.

The summit was called off but then reinstated.

After the bilateral meeting, Trump and Kim went for a working lunch.

The delegations ate in an Edwardian room at a long table decorated with a line of flowers separating the two sides.

Before sitting down, Trump asked the photographers present, "getting a good picture, everybody? So we look nice and handsome and thin and perfect?" After Kim's translator repeated Trump's question in Korean, Kim looked at the photographers awkwardly without muttering another word.

After the working lunch, Trump and Kim strolled together in the the Capella Hotel courtyard towards a group of journalists. Trump was seen chatting with Kim and Kim having a few chuckles. Though it is unclear whether Kim was able to understand Trump without his translator.

Trump told the journalists that they had a "really fantastic meeting", the meeting was "top of the line" and went "better than anyone could have expected". Trump then went on to announce the two were going for "a signing". At the time, it was not understood what was to be signed. Walking away, Trump and Kim joined their aides in a conversation before parting ways.

The day ended with a signing ceremony. Reporters and photographers waited for the two leaders to enter the room prepared with a long table with two pens on it, one being Trump's signature black marker. Even at that point, everyone was kept in the dark as to what was to be signed, but CNN had reported Trump and Kim were going to sign a joint statement recording the progress achieved at the summit.

Right after Trump and Kim sat down at the table, Trump immediately announced to the press present that they were signing "a very important document, a pretty comprehensive document". Kim said via a translator that they were leaving the past behind.

"The world will see the [sic] major change. I'd like to express my gratitude to President Trump to make this meeting happen," Kim continued.

Right after exchanging the two copies of the signed document, in his typical mannerisms, Trump patted Kim on the back. According to Trump, the summit "will lead to more, more and more." He would "absolutely" invite Kim to the White House, something Trump indicated he would do if the summit went successfully.

The signed statement was made very secretive. The contents were not revealed until Trump's 2:30 pm press conference. Before Trump spoke to the press, journalists tried to zoom in on a photo of Trump briefly showing the agreement to the press in the signing room.

Here are the main points in the agreement:

As already widely discussed before the summit, it is unclear whether "denuclearisation" implies the withdrawal of American nuclear presence in the Peninsula. The agreement did not clarify this and might be thorny issue in future meetings on the matter.

Top image by the White House