Marvyn Lim Seng made a promise to the late Lee Kuan Yew in 2015.

At the former prime minister's wake, they were giving out postcards for people to write farewell messages.

Inspired by Lee's contributions to the nation, Lim then promised he would strive to send the first Singaporean into space.

The 57-year-old had spent 15 years at the Ministry of Defence where he worked on Unmanned Aerial Vehicles (UAV) projects.

He then headed to the Airbus Group.

Subsequently, Lim used his experience in drone and UAV projects to set up IN.Genius, which in Lim's words, sets out to "solve the world's problems".

There, Lim started GoSpace, his self-funded campaign with a single mission -- to send a Singaporean into space.

Bureaucratic challenges of a space project

From the onset, Lim was looking for a guy to send to space who has the right heart and right reasons.

Lim said this is important because the chosen candidate is going to be a role model for many people.

Lim asserts that while the campaign has many candidates who are physically fit and intelligent, and who are able to take on the challenges of blasting into space, they looked for the guy with the "right mind, right heart, and guts"

The identity of the Singaporean going to space will be revealed soon.

Thank you India and Australia

Preparing for the launch took over five years. Besides the technicalities and flight testings, Lim said that it were the "mind-boggling" human challenges, like dealing with people and bureaucracy, which threatened to stop the show.

Lim is particularly grateful for the help and lack of bureaucratic red tape from TIFR and CASA, which was a relief after his request to launch a space balloon here was rejected by the Civil Aviation Authority of Singapore (CAAS) due to the safety risks posed to the high density of air traffic.

Giving back to society

When asked about his reasons for heading this project, Lim said that he saw this as a way to give back to Singapore for all the opportunities that he had growing up.

Growing up in a poor family, Lim went on to obtain a degree and three masters through government scholarships. From there, he went on to work on many different international UAV and spacecraft projects.

"I would have never been able to do all these without the scholarship support," Lim said.

"Every time I do a test launch, I also bring along a couple of students, all expenses paid, as my way of giving back to society."

The space capsule carrying an astronaut will be launched at 4.30am (Singapore time).

It will travel to the edge of space at the Armstrong Line, before the line to the helium balloon will be cut and the capsule begins its descent to the ground. 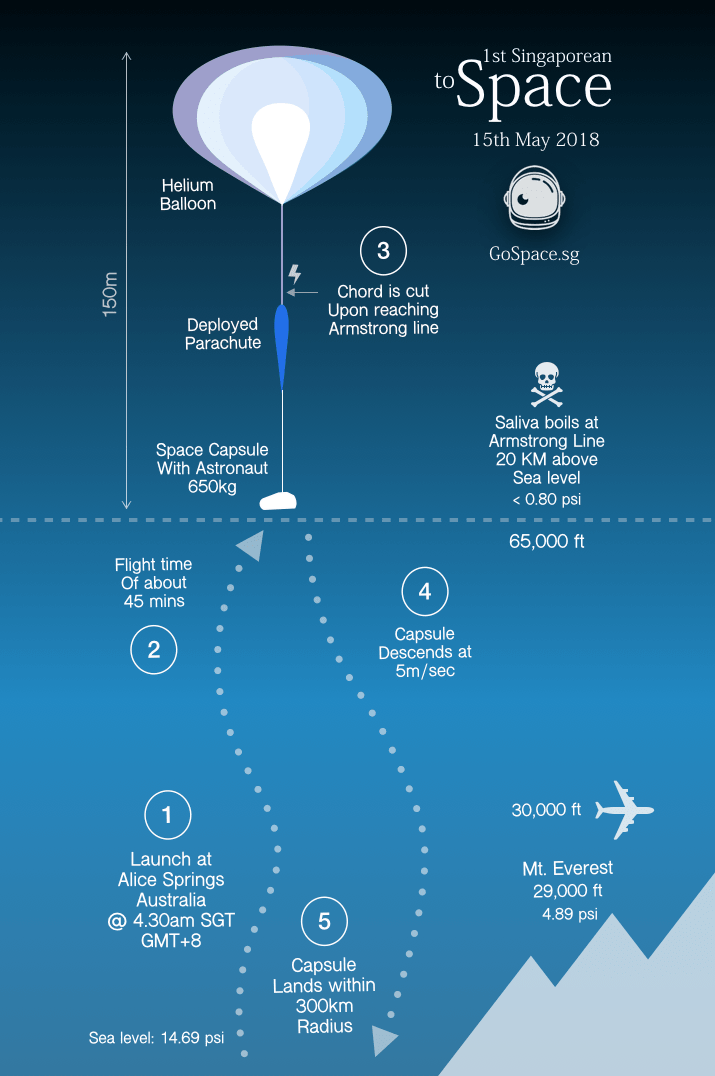 For this launch, GoSpace is sending only one person into space, but if it is successful, Lim hopes to send "maybe four or five" more people in the future.

Speaking of the future, Lim hopes to develop a space port on Earth to function as a Mars base that will function as an education convention centre for space-related projects.

To find out more about GoSpace, you can visit its website here.