Inuka, Singapore's last remaining polar bear, might soon be put down if he does not respond to intensive treatment for his old-age-related illnesses:

At 27 years old, Inuka has exceeded his lifespan and would be in his 70s if he were human.

Polar bear experts all over Singapore

Upon news of his pending demise, plenty of animal champions have offered their opinion on what should be done for/with the polar bear.

Main concerns include housing an arctic bear in the tropics, Inuka's loneliness, and the ethics behind putting him to sleep instead of letting him take his last breath naturally:

Inuka used to live with his mother before she passed away five years ago, by the way.

Here are accusations that the zoo is using the ailing bear as a money-making tool:

However, Twitter user @ShannGoh explained Inuka's living conditions and why he will live out the rest of his life in Singapore:

In case you can't see it (summary below): 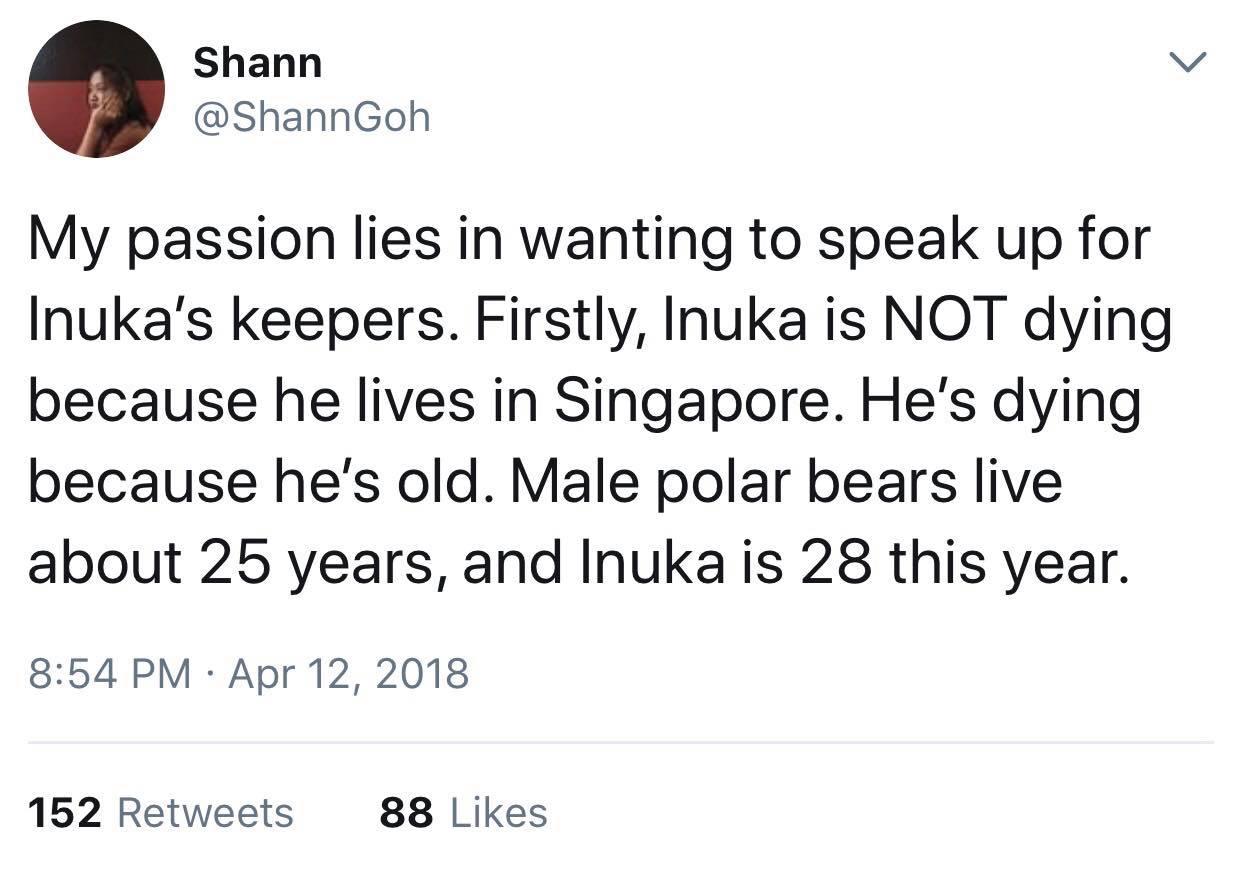 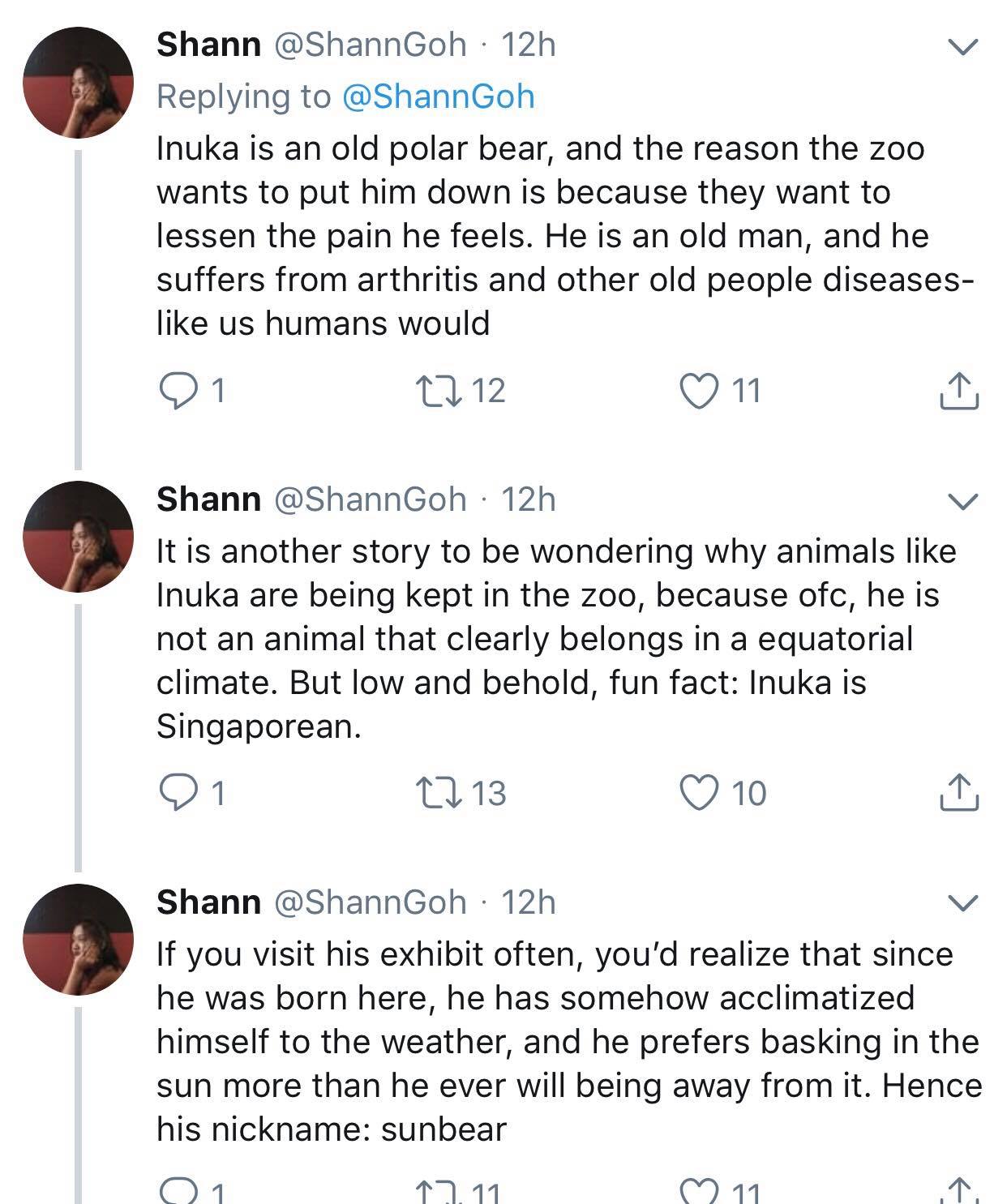 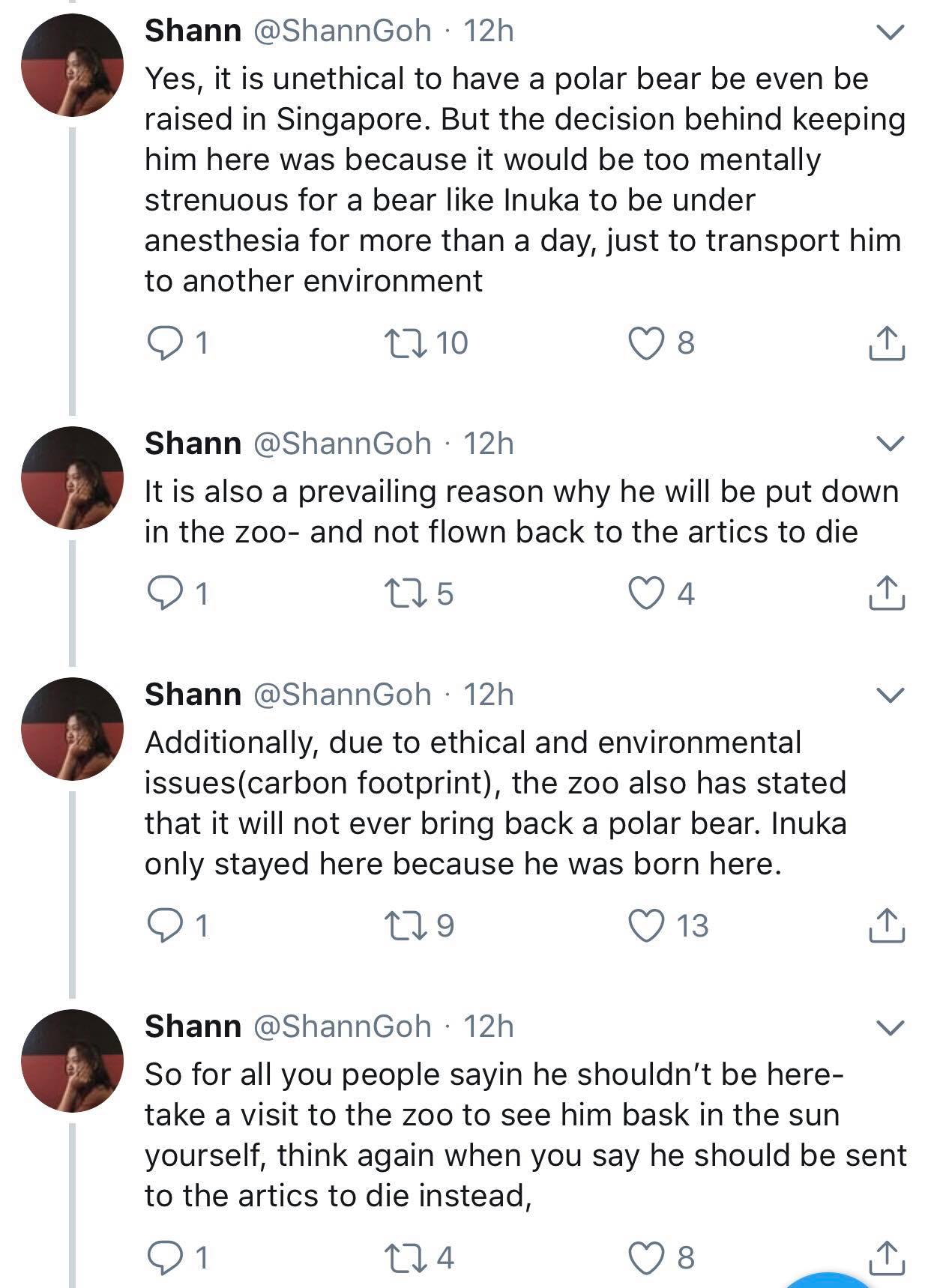 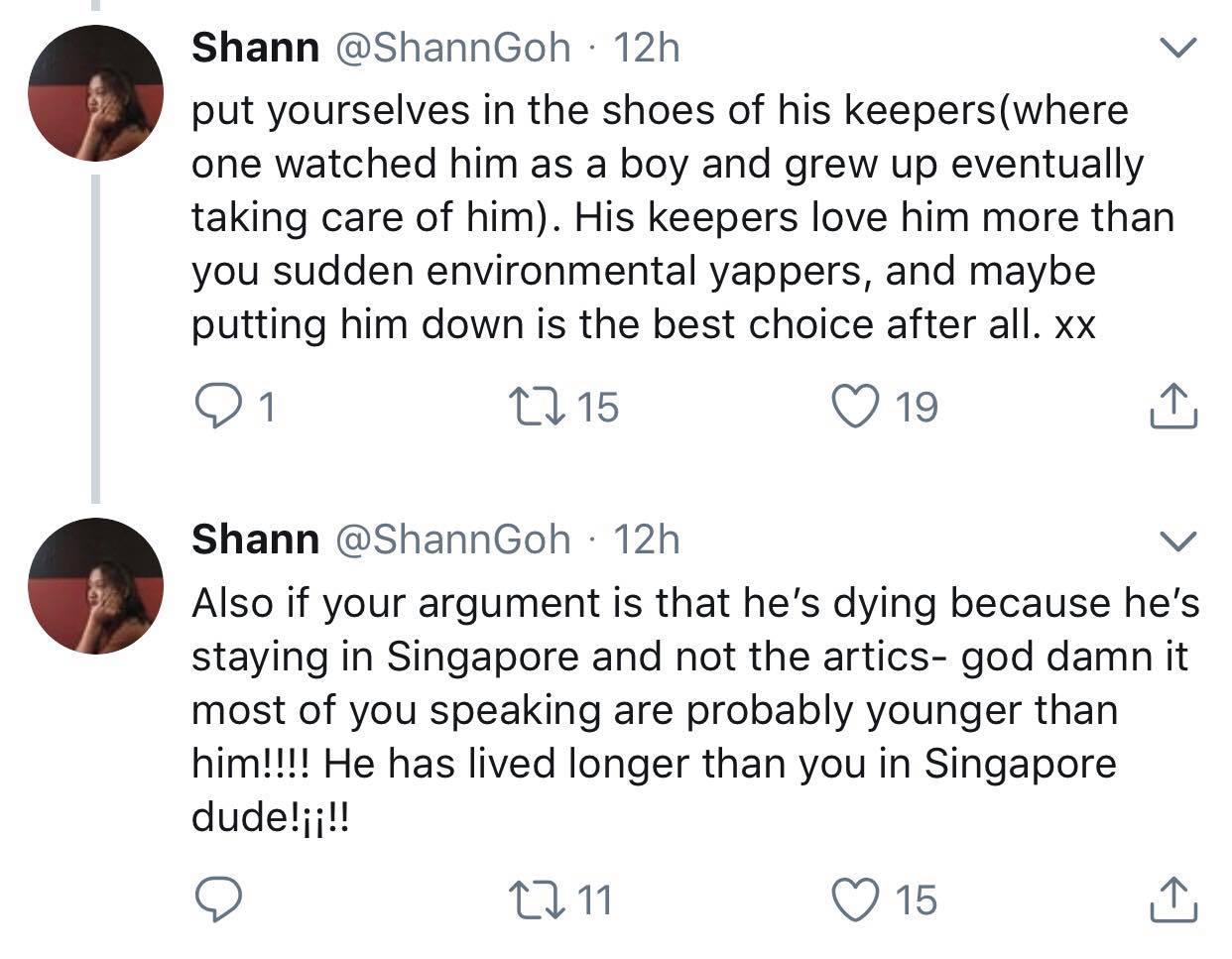 Besides the fact that Inuka is actually 27 (he only turns 28 in December this year), the thread is largely accurate, a spokesperson from the zoo confirms.

Here's a summary of the thread:

- Inuka is only staying in Singapore because he was born here.

- He enjoys basking in the sun, despite having access to his air-conditioned ice cave.

- It would be too mentally strenuous for Inuka to be under anaesthesia for the entire day just to be transported back to the arctics.

- It is also why he will be put down in the zoo, instead of being sent to the arctics to die.

Additionally, the zoo spokesperson confirmed that they will not be bringing in another polar bear to Singapore, this after discussions with the Animal Welfare and Ethics Committee (AWEC) in 2006.

Instead, the Zoo’s will focus on featuring tropical wildlife and threatened Southeast Asian species in need of ex-situ (off-site conservation) management programmes.

Polar bear keeper used to visit Inuka as a kid

Another zoo-goer, who apparently knows Inuka's keeper, described how the keeper was more concerned for the polar bear than his own girlfriend: 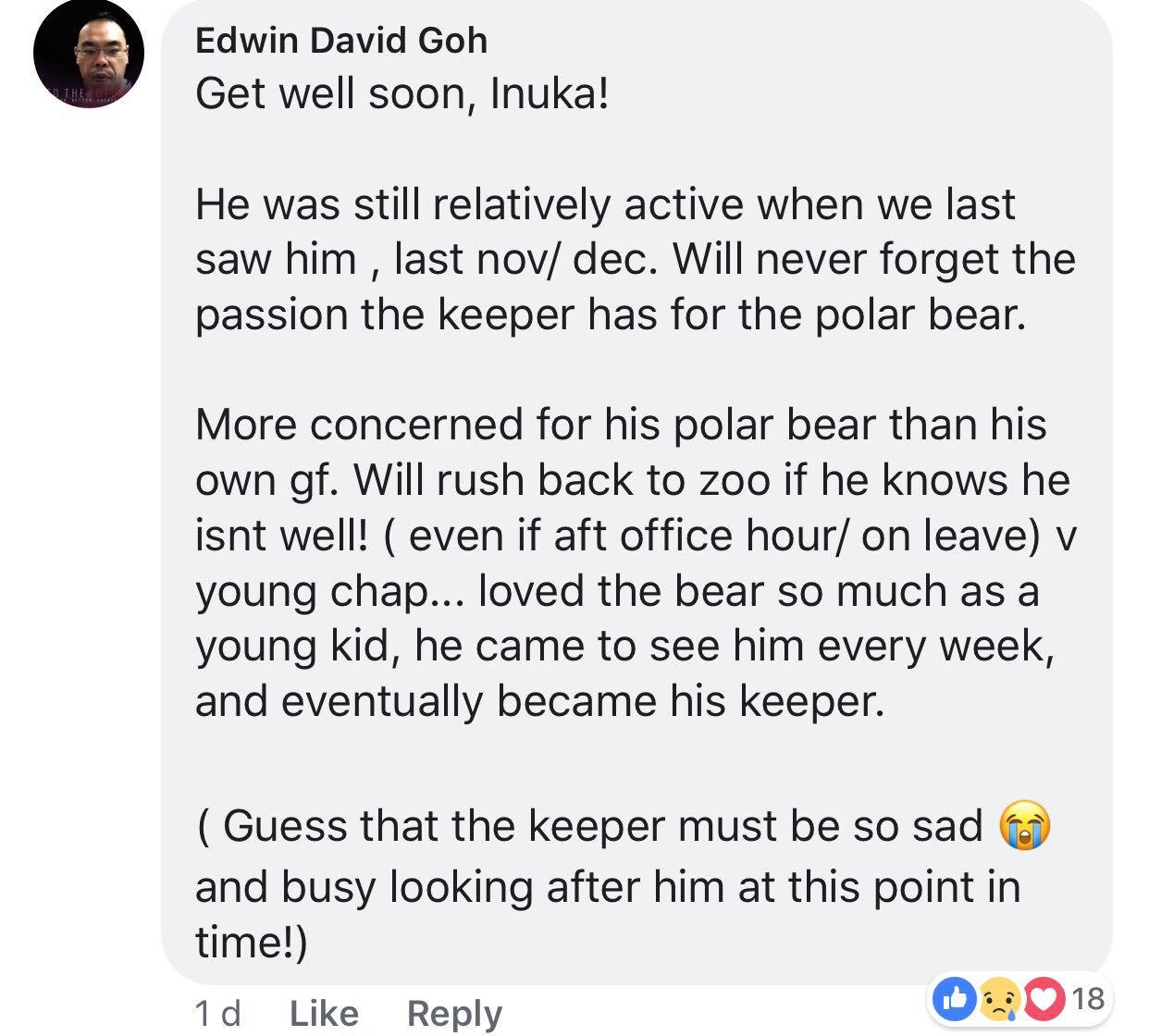 If you would like to keep up with Inuka's condition, you can check out Wildlife Reserves Singapore's Facebook page.