Also known as the Jackson Plan, this town plan was the first ever to organise Singapore town coherently,

According to Sir Stamford Raffles, communal harmony and ease of trade were the main considerations behind allocating land parcels to ethnic communities.

Aspects of the Jackson Plan

The Town Plan focused on the area along the Singapore River, and stretched from Telok Ayer to the Kallang River.

South of the Singapore River was the Mercantile Square (bottom of image), where merchants conducted their trade.

Today, the Mercantile Square is known as Raffles Place, also a business hub.

Fun fact: The market you see next to Mercantile Square is actually Lau Pa Sat. 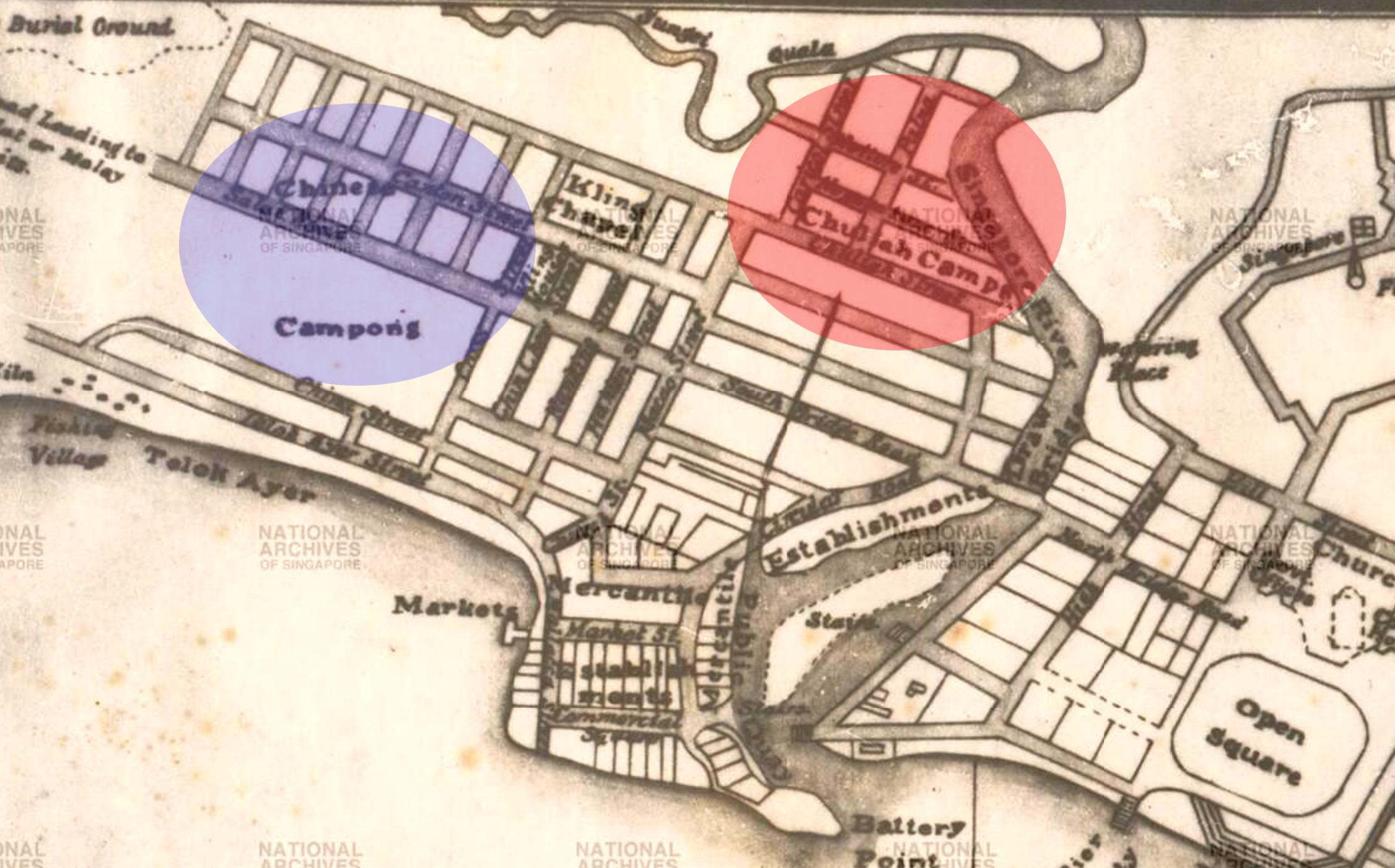 Southwest of Mercantile Square was the Chinese Campong (Kampong), circled in blue above, which was designated for Chinese settlers.

This area is presently the Chinatown/ Tanjong Pagar area.

If you look at the close up of the map above, you'll find that Telok Ayer Street runs along what was known as the Telok Ayer Bay.

This was the view of the Telok Ayer Bay from the nearby Mount Wallich: 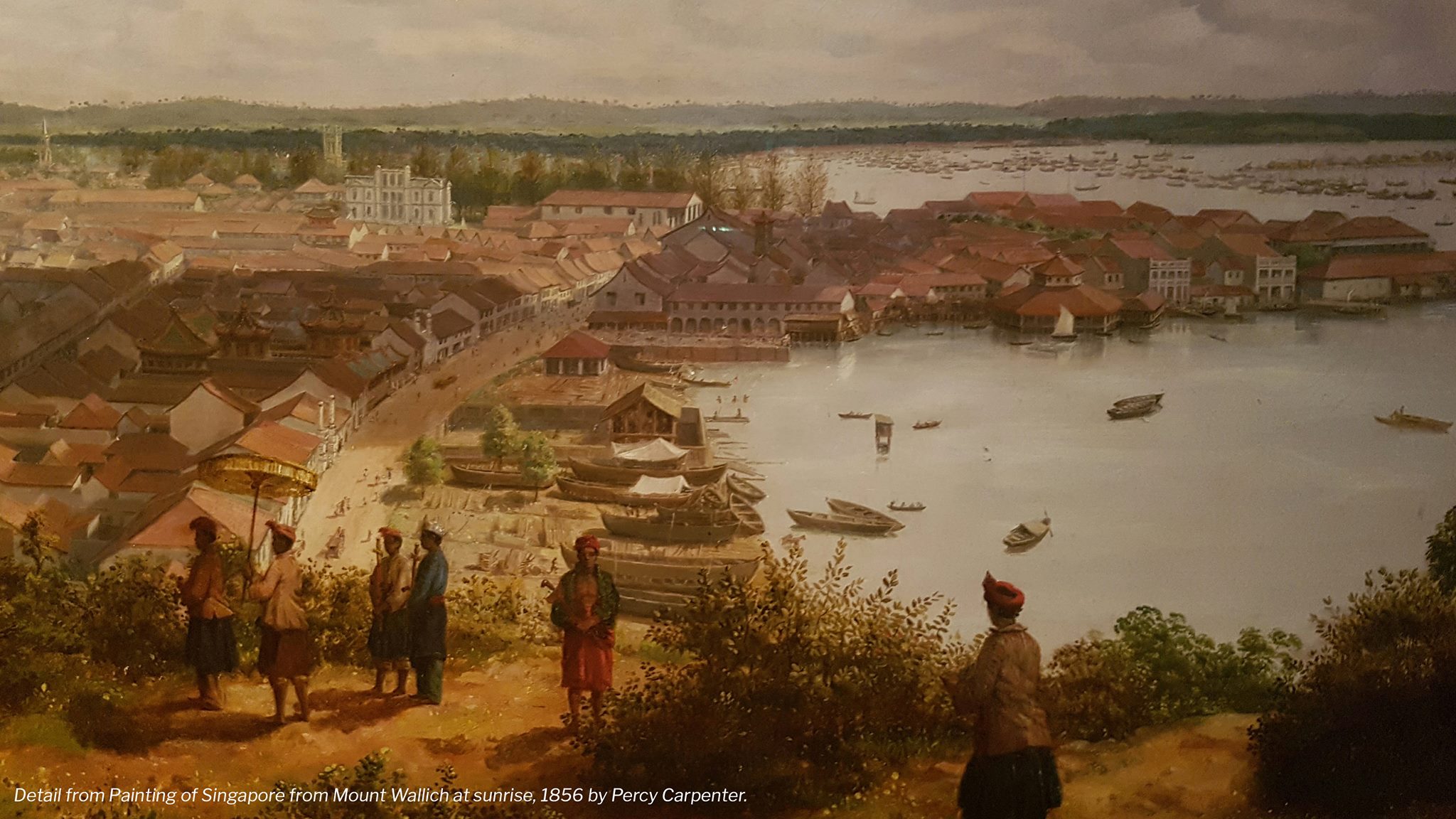 Give thanks for surviving

Along the bay, you'll find places of worship such as the Nagore Dharga mosque and the Thian Hock Kheng temple. Their locations next to the water's edge was not coincidental.

After making the long and dangerous journey to Singapore, many immigrants wanted to first offer their gratitude before settling down. These places of worship offered them the chance to do so.

Today, the temple and mosque are no longer next to the sea, thanks to land reclamation.

Further upstream of the Singapore River was the Chulia Campong (Kampong) circled in red below.

The Chulias were South Indian immigrants from the Coromandel Coast of southern India. If you look closely, you might spot the presence of a Kling Chapel next to the Chulia Campong.

Fun fact: "Kling" is actually a corruption of the word "Kalinga", the name of an ancient Indian empire which traded with ancient Southeast Asian regions. According to Malay myths, the father of Sang Nila Utama was Raja Chulan, a king from Kalinga.

Across the river, a portion of space was reserved for government buildings.

This area (circled in green below) was bounded by Fort Canning, the Singapore River, and the seafront beyond the Padang (which is labelled "Open Square" in the image below). Some of the government offices built there included the Supreme Court, the Municipal Building, and the old Parliament House found in Empress Place.

Raffles also established a Botanical and Experimental Garden on Fort Canning as a way of beautifying the city.

North of that area was European Town, which was the residential place for Europeans. This became what we today know as Beach Road.

Finally, the Malays were given kampongs near the Sultan's house (presently the Malay Heritage Centre) -- most notably the Arab Campong and the Bugis Campong on either side of the house. 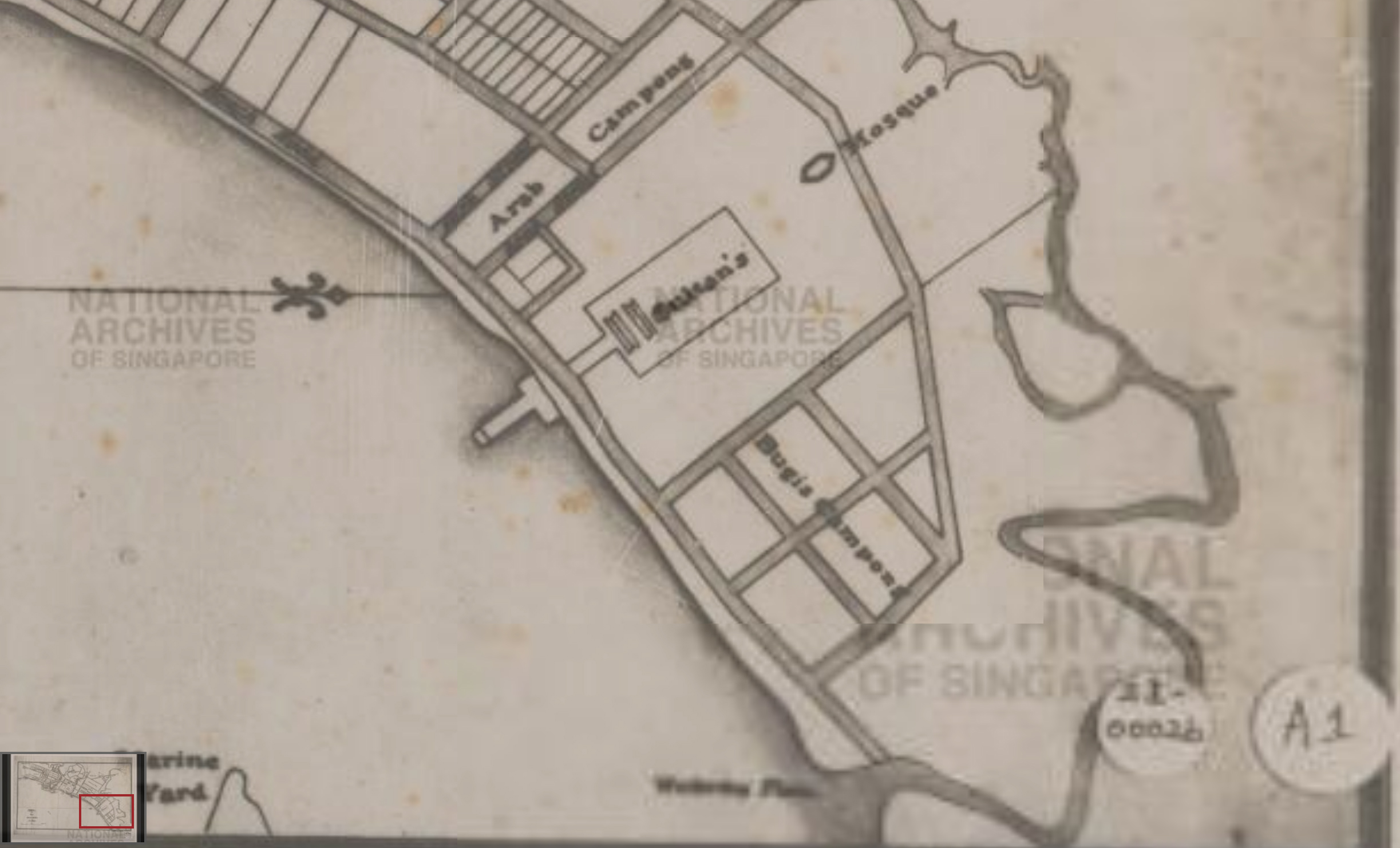 Ultimately, Kampong Gelam and Chinatown managed to live on as the cultural centres for their respective ethnic groups.

The money-lending Chettiars started to form their own enclave along Chulia Street (located in Mercantile Square). Today, their presence still lingers on in the form of money-lending businesses in Change Alley.

Other South Indian immigrants move towards Serangoon, presumably to take advantage of the Serangoon River's source of water for their cattle trade. Their community started to grow and slowly become the Little India locale we know today.

You can view a close-up of the Jackson Town Plan here.