Like the case of this paranormal investigator, who had nightmares right after exploring the decommissioned Mount Vernon crematorium:

And in another undisclosed part of Singapore apparently lies an abandoned HDB estate that looks distinctly haunted.

In three separate threads, Twitter user @skxnnygxy recounts his "adventures" in that estate, which he (and his friends) trespassed in order to explore.

It starts with him saying that the energy in the building they explored was so "ominous", he faced breathing difficulties as he walked up the stairs: 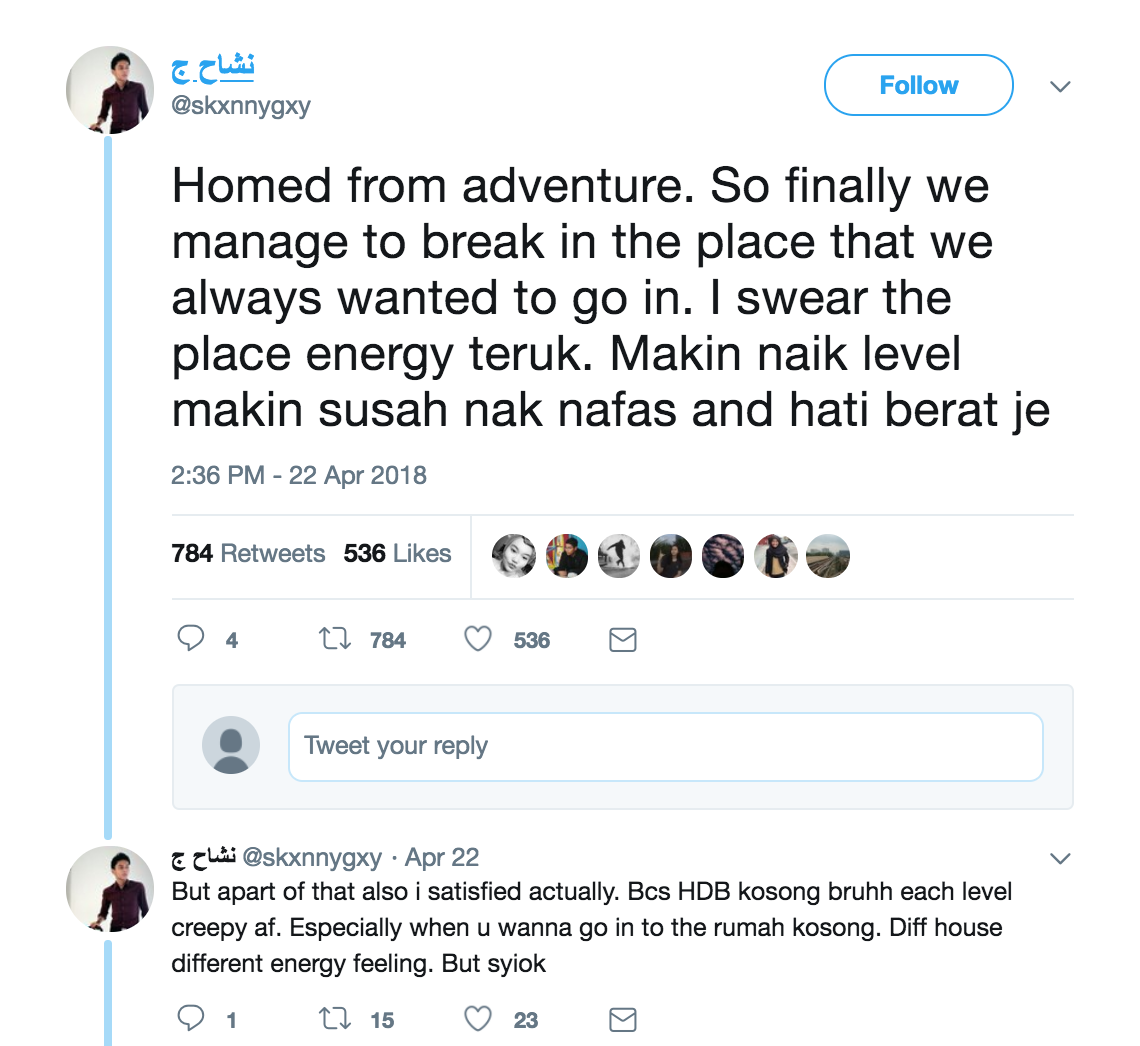 "Home from the adventure. So finally we manage to break in the place that we always wanted to go in. I swear the energy of the place was bad. The more we went up, the harder it was for me to breathe and my heart just felt heavy.

But apart of that also I satisfied actually. Because the HDB is abandoned bruhh each level creepy af. Especially when u wanna go in to the empty houses. Diff house different energy feeling. But syiok"

He then found some chicken feet (a Chinese delicacy) lying around in a take-away styrofoam box, which he suspects is an offering to the ghosts in the abandoned apartment: "Like bruhh who tf left these chicken feet? It must have been there for decade I guess. It look damn ugly HAHAHAHAH LIKE A MUMMY. A ghost might have eaten it, that's why it looks so lifeless. There's also no flies or worms on the chicken feet. So strange."

Upon request, he back-pedalled to provide more information about his eerie episode around the abandoned HDB flat: "So there's a request from someone to continue with the story. Let me restart the whole story ok. This is abandon HDB that located somewhere around Singapore. Yeap that sh*t is a dirty place. It abandon for a few years. The ghosts who stayed there are no longer humans HAHAHAHAHA"

Beginning with the very strange phenomenon of not being able to catch their breath the higher they go:

@skxnnygxy then started taking more photos of his surroundings: 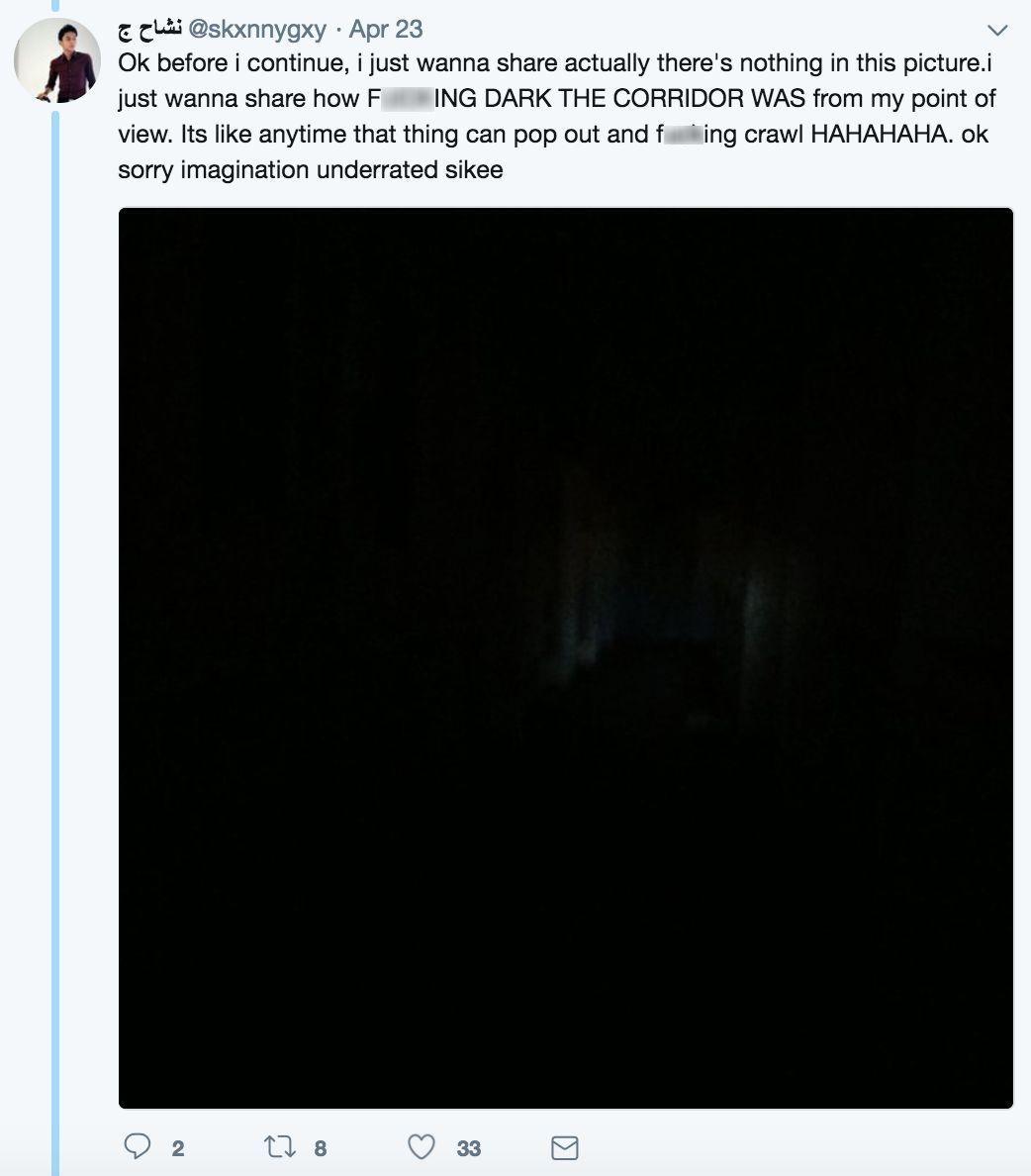 The group then entered a unit, where they experienced more allegedly paranormal activity: 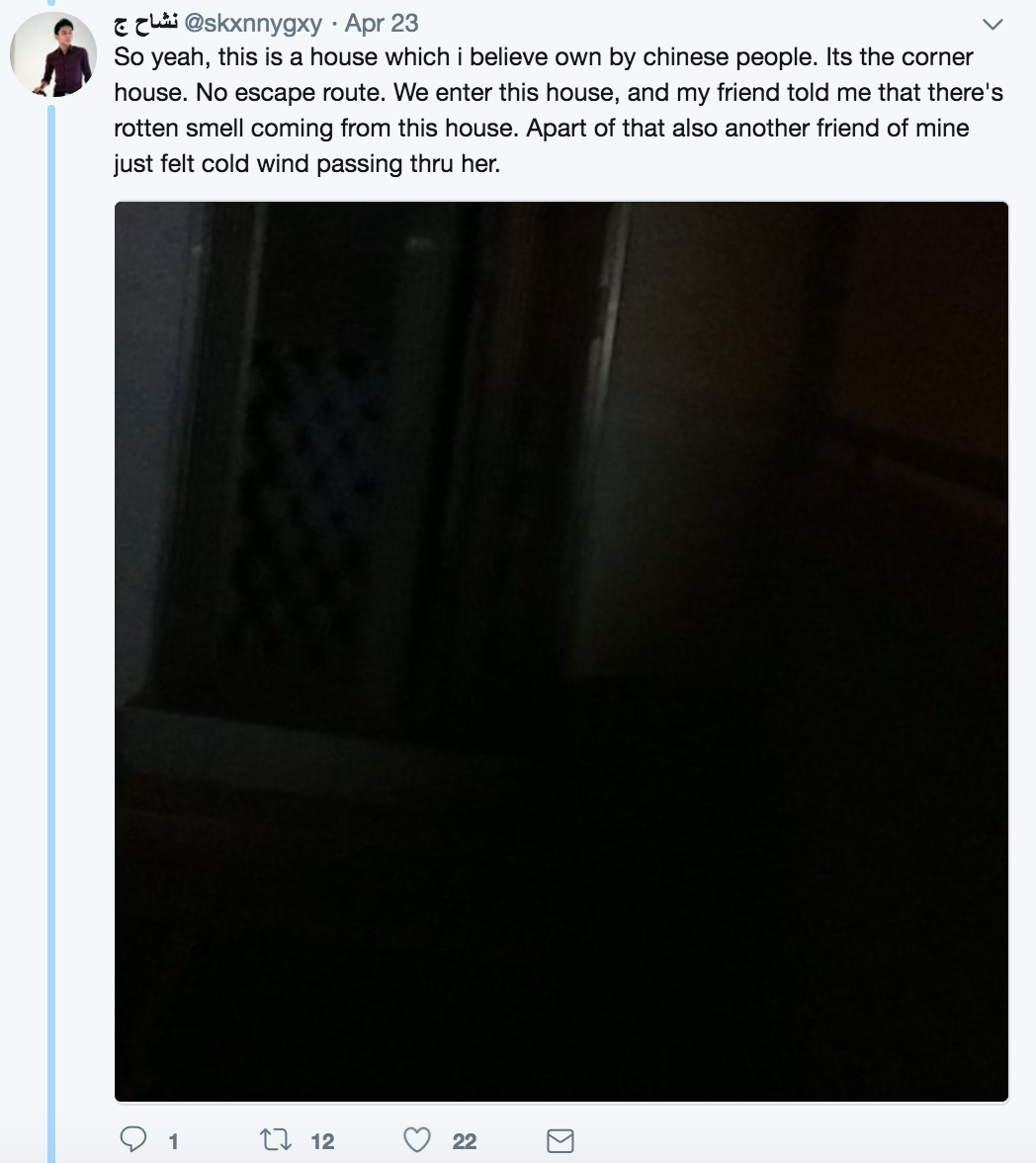 In another house, the group couldn't go through the unit's door with ease, despite the fact that it was already wide open: "So we shift to another house, it was told before I reach (i was late actually. I force them to go up for the 2nd time hahaha) the house door felt too squeezy to enter. How could it be so squeezy when the door was opened so big, a bear could enter with ease. Weird, right?"

But for some reason, they still thought it'd be a good idea to linger in the room of the unit, where they heard singing: 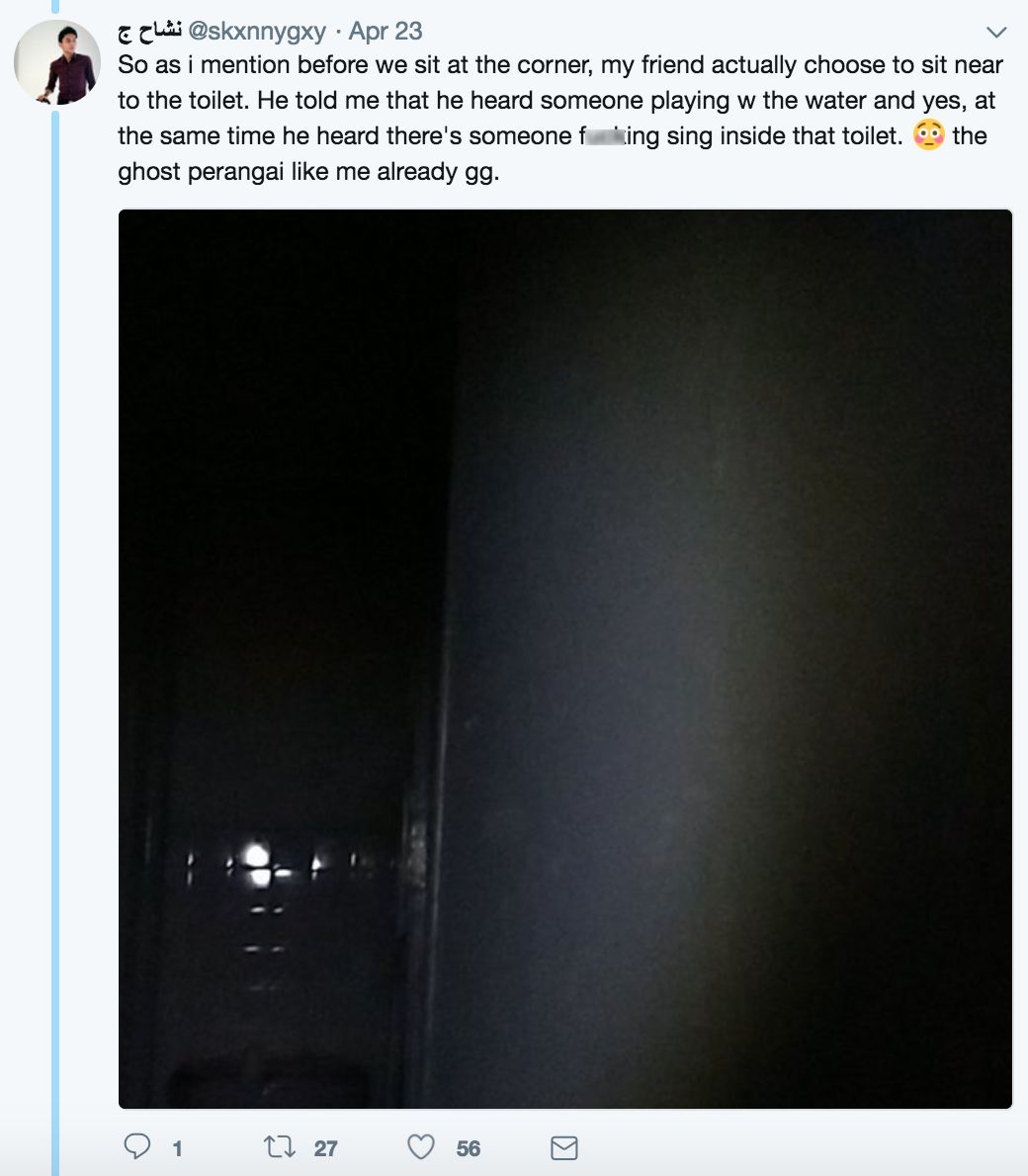 "So as I mention before we sit at the corner, my friend actually choose to sit near to the toilet. He told me that he heard someone playing with the water and yes, at the same time he heard there's someone f**king sing inside that toilet. the ghost attitude like me already gg."

They left shortly after, but the entire group allegedly started to have weird things happen to them: "Ok after we sat inside, we choose to leave the area. And here's what actually happened. Me and my friend clearly heard the first house door squeaking. As if there's something pushing the door. We stood in between the house corridor and yeah, I got goosebumps. Shit get real

So we slowly make our way down the block. We reach the carpark my friend complain to me that his left shoulder was in excruciating pain. He cant even called us when he sat at the staircase. His mouth and his left hand somehow jam. Not only that. Another of my friend acting weird. Oh my

Honestly, I'm not good at reading the Quran. But I assist my friend as much as I can. Because another two of my friends are not pure. So yeap I managed to heal/pull the energy that hit my friend's hand. He felt relieved after that. The next one, however, is much more peculiar."

At this point, @skxnnygxy directs us to the second thread.

At this point, he claimed his friend was not acting like herself: 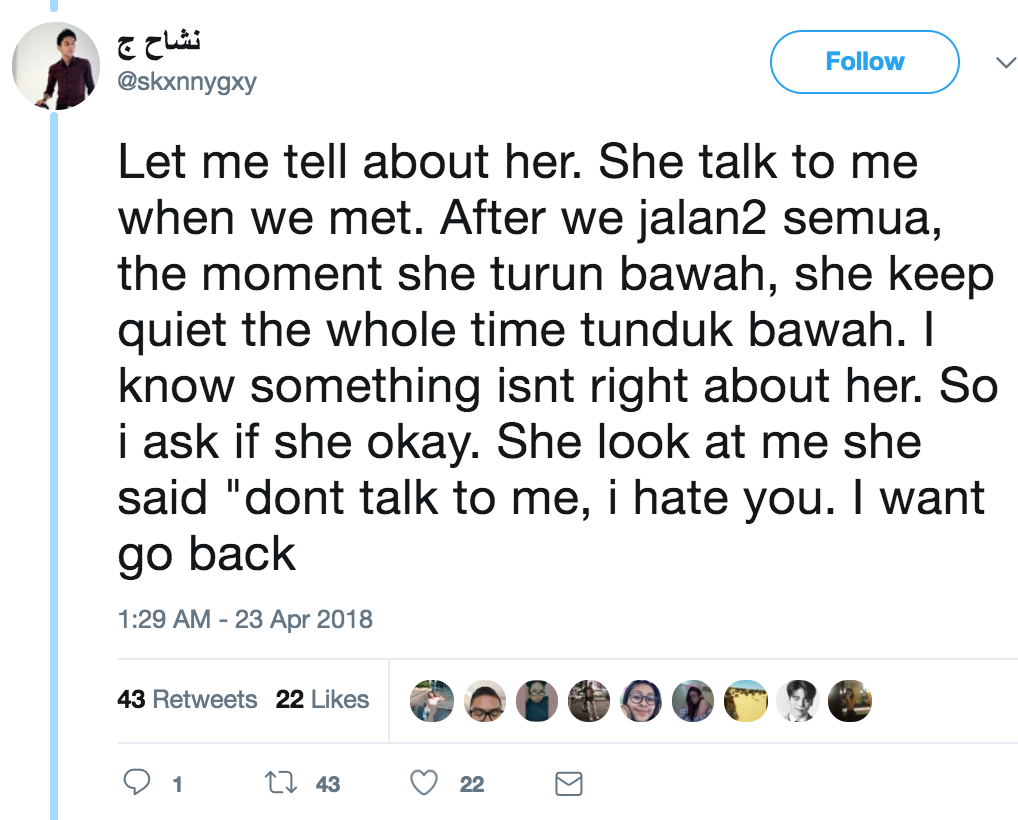 "Let me tell about her. She talk to me when we met. After we walked around, the moment she went down, she kept quiet with her head bowed down the entire time. I know something isn't right about her. So I ask if she okay. She look at me she said 'don't talk to me, I hate you. I want to go back'" "'To that staircase, I wanna sit there' And she started crying. So u know alr ah that thing keep playing with her mind calling her to go back. We ask her to get back in the car. She reject die die want to go back to the staircase. Must be Malay, fond of the staircase HAHAHAHA

So my friend actually recited the azan (Islamic call to prayer) inside car. I was not there at that point of time. Because I ride my bike. So what my friend told me that she cried inside the car, she said that her left side of the body was in pain. So we stop somewhere, assist her. Funny thing is she don't like to look

At me. I don't know why. Every time I stare at her, she just hide, avoid and trying to keep distance from me, which I know that isn't her at all. So actually I waited for the right time, praise be to the Lord. She suddenly said "Anyone can help me? My body is aching badly" so ya I assist her"

It wasn't exactly a possession, but more like a close brush with what may have been one: "Ok she was not possessed. It's just that she was faint-hearted. Thats why sometime she conscious, sometime she's not. So yeap as usual, I pulled the thing from the back of her shoulder. The next thing she cry. She said it was painful, but felt relieved afterwards. So wanna know actually what happened?

She told us that when she was going up the stairs, she saw a black figure behind one of my friends. When she sat at the staircase, she actually hear some lady voice whisper to her 'do you want to accompany me?' and she nodded her head. BAMMM that figure stuck onto her.

So she said in her head she keep hearing a male voice asking her to return to the stairs. That's why she just not being herself. She don't even realised whats going on actually. So ya. Everything was fine afterward. Only my body felt painful after helping my friends to pull the thing away."

Just when you thought it's the end of the story, @skxnnygxy actually went back on another night (but not before preaching to his followers the importance of having God in one's heart): And to make matters scarier, they saw a black figure (perhaps the same one from the previous incident), which they tried to capture in a video: "Ok peace be unto you guys. This  happened like legit just now. So basically we sit in between the abandoned block. It happened that both me and my friend saw the 'black figure' past by the void deck. And the next thing this is what happened."

For the fearless, you can play it below:

Our protagonist then claimed that he dared the thing to appear:

And explains what was allegedly going on in the clip:

And that appears to be the end of his story.

Whether you believe it or not, however, is another matter.

You can read his tweets, starting from here: