Budget 2018 has been delivered, and we now know that the Goods and Services Tax (GST) in Singapore will go up to 9 per cent.

And the debates have begun in earnest, even prior to Feb. 27 to March 9, where the Budget will be discussed in Parliament.

Informal discussions have kicked off

Before that happens, informal critiques have sprung up almost immediately in reaction to Budget 2018.

Public intellectual and economist Donald Low said in his Facebook reaction to the Budget announcement on Monday evening that he is of the view that the GST does not have to increase.

The gist, Low argues, is that the decision to cap NIR takings at 50 per cent is an arbitrary one, and can honestly, even safely, be increased to, say, 60 per cent.

And this reasonable-sounding increment in proportion of expected investment returns can, fascinatingly enough, make us enough money to spend without needing to increase GST to 9 per cent.

Taking the estimated amount that the NIRC adds to the budget at S$15.9 billion, Low calculated that raising the takings to 60 per cent would add an extra S$3 billion at our disposal, growing at the rate our reserves are too.

An amount which he says is "almost exactly" what a 2 per cent hike in GST would yield — forever.

Here's what Finance Minister Heng said about using more of the NIR:

"Currently, we spend up to 50 per cent of expected net investment returns, and keep the remainder in our reserves. This allows our reserves to grow with our economy.

If instead, we used 100 per cent of the returns, the principal sum of the reserves will stagnate over time, and the NIRC as a share of GDP will consequently fall as our economy grows. The impact of this will not be trivial given that our budget now relies on the NIRC as our largest source of revenue.

In a more extreme scenario, if we spent more than our investment returns, we will eat into our nest egg. Doing so would mean that our reserves will shrink over time, generating a progressively smaller stream of income in the years that follow, till eventually our reserves are exhausted."

True enough, he spoke about using 100 per cent of the returns, but not, say, more than 50 per cent.

Idea for the government, perhaps?

But wait, what is the NIRC?

In the midst of all this talk, the acronym "NIRC" has come up quite a bit.

So in the event this debate might get picked up in Parliament, it'll be challenging to follow if you don't first understand what the Net Investment Returns Contribution (that's what NIRC stands for) is. So we'll throw you a bone and help you with that, using a Chinese New Year analogy:

The Net Investment Returns Contribution — an analogy in oranges

Let's say you've got a basket of oranges. Like this one:

So, in essence, you need more oranges.

You take two of the oranges from the basket to go visit your relatives and wish them well in the new year:

And in return, you get your oranges back, and also... ang baos:

So what do you do with these oranges and ang bao money? You put the oranges back into your basket:

And then you take your ang bao money and spend it on something fun like Ban Luck (blackjack) or mahjong. And then, hopefully, from there, you make more money from winning.

And then you use some of that money to buy more oranges to put in your basket...

... while taking another portion to continue playing games to win more money to buy more oranges. And with the new year, you bring the newly-purchased oranges out again to do your rounds of visiting, and continue to put more oranges into the basket.

This, in essence, is the simplest form of how our reserves and investment work.

Prior to 2009, the government grew its basket of oranges by:

a) "investing" groups of oranges by doing lots of visiting, and then taking in lots of angpow money, and

b) giving away pairs of oranges to the idiots who forget to bring them for visiting, and then getting them back together with, say, an extra because the orange-borrowers 'owed them one' (i.e. two oranges became three).

It could then take half of the angpow money and extra oranges it gained to spend on the country and whatever it needed, while the rest of the gains went back into the orange basket so that it continues to grow. This is also known as...

For the financial year of 2009 onwards, though, the government decided it could figure out a way to safely use more angpow money (not the oranges, mind you) for spending. They did this through the...

This is a bit more difficult to explain using oranges, but the idea is this:

You have that basket of oranges, right? And you've taken some of the oranges to "invest" so you can receive more oranges and angpow money in return. And after playing enough mahjong and blackjack you've realised you can predict how much you'll make from your gambling. And then you decide you can take half of the predicted amount (you know, just in case you eventually end up earning a bit less than that amount) to spend.

Except this time, the amounts involved are in the billions. And they're handled by three investment bodies: Temasek, GIC and the Monetary Authority of Singapore (MAS).

What if they lose money on their investments, like big-time?

Good question. The government investment bodies quite likely invest in really rock-solid stable things, though — (think about how there are types of investments that come with guaranteed interest rate returns, for instance) only some of these investments are as risky as blackjack. Most of these are probably grounded in very clear and certain things that can definitely make Singapore money. Our guess is our government investors are a very conservative group of people, not to worry.

So that's the NIRC, in a nutshell — or in this case, an orange basket. It's made up of half the NII and half the NIR, to form the amount of money the government allows itself to spend every year in the Budget.

This is important because now, the Net Investment Returns Contribution (NIRC) has overtaken corporate tax to become the largest single contributor to the government’s coffers. 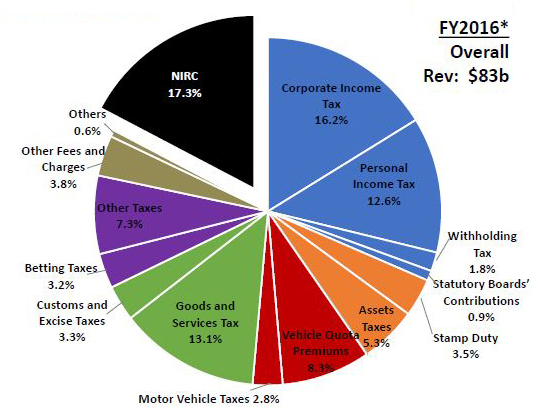 GST and personal income tax are expected to constitute S$11.4 billion each towards the government's operating revenue for FY2018, while corporate income tax is set to contribute S$15.1 billion.

Top photo courtesy of the Institute of Policy Studies, NUS