In case you didn't know, Subway Singapore has shown interest in going halal (which means "permissible" in Arabic).

If they do go halal, they will be following in the footsteps of Subway chains in London and Malaysia.

Now, this news brought waves of joy to the Singapore Muslim community online: 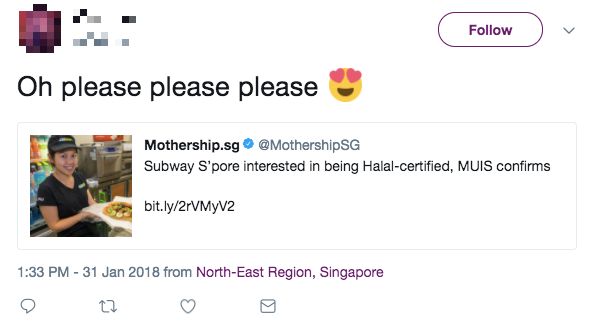 And brought relief to some of the Muslims out there who were begrudgingly judged for their "no pork no lard" lifestyle. 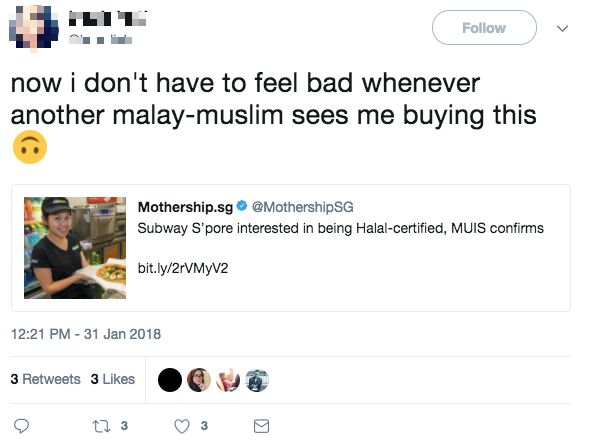 Enter patrons of the fast-food chain that has been non-halal for 22 years. 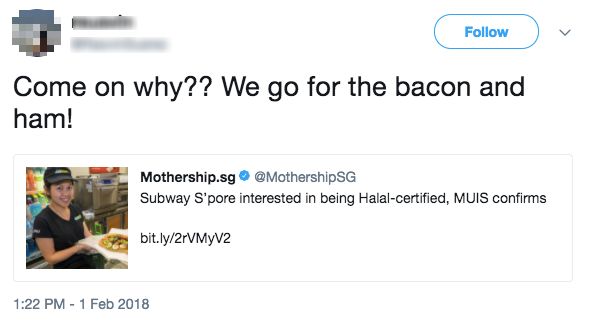 So here's why I don't really care if Subway goes halal or remains a non-halal establishment.

There are substitutes (pun intended)

Sandwiches are easily made by oneself.

But if that's too much of a task, there are other halal/ Muslim-owned sandwich places such as Toasties and Watsub, whose main customers are Muslims who can't eat Subway because, you know, tak halal.

And if a major fast food conglomerate like Subway decides to be halal-certified, these local eateries can potentially lose their target market.

Moral of the story: #SupportLocal.

The move to halal isn't even confirmed

If you read the article properly, Subway is just showing interest and have not submitted any formal applications.

Still can't see it? Don't worry, I've blown it up for you.

Granted, Subway Singapore now has an extensive list of restaurants serving pork-free protein, but that still doesn't mean that the meats are halal-certified.

You see, halal is more than just the type of meat that Muslims are allowed to consume.

While the halal certification requirements in Singapore are complex, the basic criteria do not just require the raw ingredients to be halal, but that the utensils (such as the crockery, microwave oven, frying pan etc.) must not be cross-contaminated with non-halal items.

This, we figure, will take a while for Subway to replace as there are more than 50 branches.

If they are positively going to go halal, that is.

So, let's save our energy and not fight about it unless they 100 percent plus chop are going halal.

Now, let's admit it: This saga is blowing way out of proportion because non-Muslims expressed their desire for pork to remain in one of the few non-halal fast food chains. 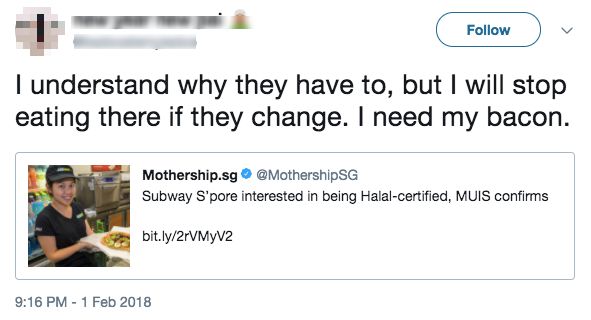 The flame was fanned harder when some Muslims saw this tweet: 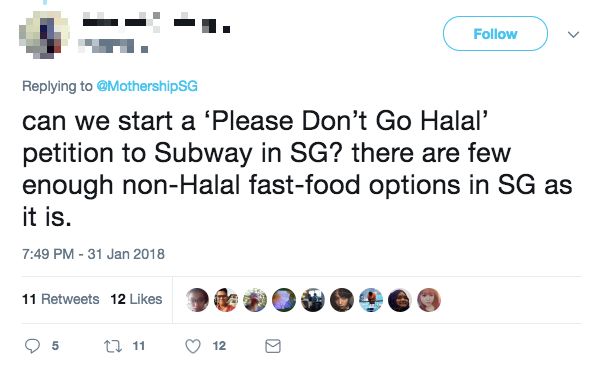 And this, in my unpopular opinion, is fair as it is a matter of personal dietary preferences.

It definitely was not fuelled by racism or any sort of discrimination, for that matter.

In fact, just like how Muslims are entitled to have a new halal fast food option, this dude right here is entitled to share and retain his love of pork.

And these replies to the same tweet, which are apparently posted by Singaporean Muslims, got personal.

Translation of last sentence: "Not long from now, you will look like a pig too." 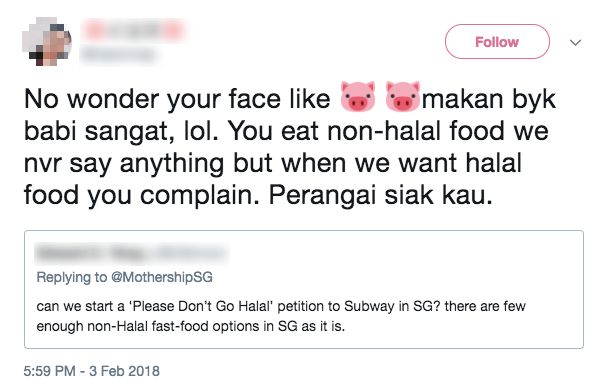 "No wonder your face like pig, you ate too much pork, lol. You eat non-halal food we never say anything but when we want halal food you complain. What an attitude."

All this hate for a sandwich. Sad.

Minding their own business

If Subway goes halal, Singaporean Muslims will have the convenience of having a grab-and-go sandwich since Subway is literally everywhere.

However, before anything else, Subway is a business and businesses mainly get set up to make profits.

Petitions were made for Subway to go halal in Singapore in the past, and Subway has acknowledged the demand for it back in 2010: 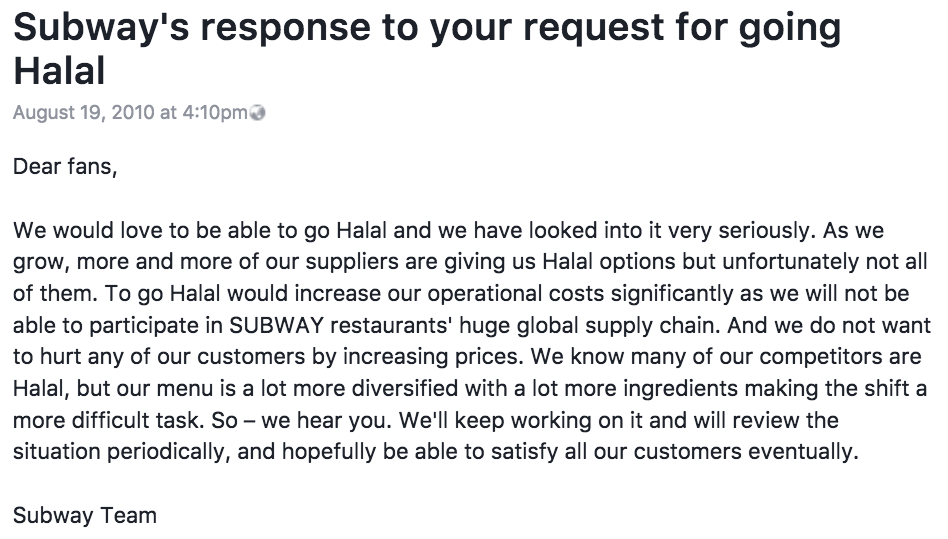 And of course, they decided not to because going halal will "increase (our) operational costs".

Forking out more to cater to about 15 percent of the population obviously was not profitable then.

While we don't know why Subway decided to change their stand eight years on, we're pretty sure it's mostly reasoned by profitability and not the demand from the halal-eating community.

It's just a sandwich, not a ballot for a BTO flat

It's literally a loaf of bread, some cold cuts, a selection of vegetables and a dash of sauces.

If it goes halal, then that's great news for us Muslims, I guess.

But it really doesn't matter if it remains a non-halal establishment because:

And it's not like it's going to stop some of us from sneaking in for a tuna or egg mayonnaise sub.

But hey, if Subway does decide to open a halal sister chain, I hope the people from Subway can name it Subpar.

Because they always say halal food not as nice as non-halal food.