Singapore always finds herself in weird but still tenable positions.

She is majority Chinese but English-speaking.

She is an inspiration and the competitor of countries working their way up the economic ladder.

She is outwardly internationalist, but inwardly tribal.

She is physically small but big in ambition.

She is worried others will steal her lunch but has no qualms about stealing others' lunch.

And the one thing that foreigners who have visited Singapore find hard to reconcile: Why is Singapore blatantly wealthy and so austere?

In other words, why has Singapore never been big on welfarism?

A topic of discussion

All these characteristics make Singapore a source of fascination and a topic of discussion.

Which is why, since 2016, a blog entry written in Chinese about Singapore's working old has been making its way around the Mandarin-speaking parts of the world, namely in Taiwan and China. 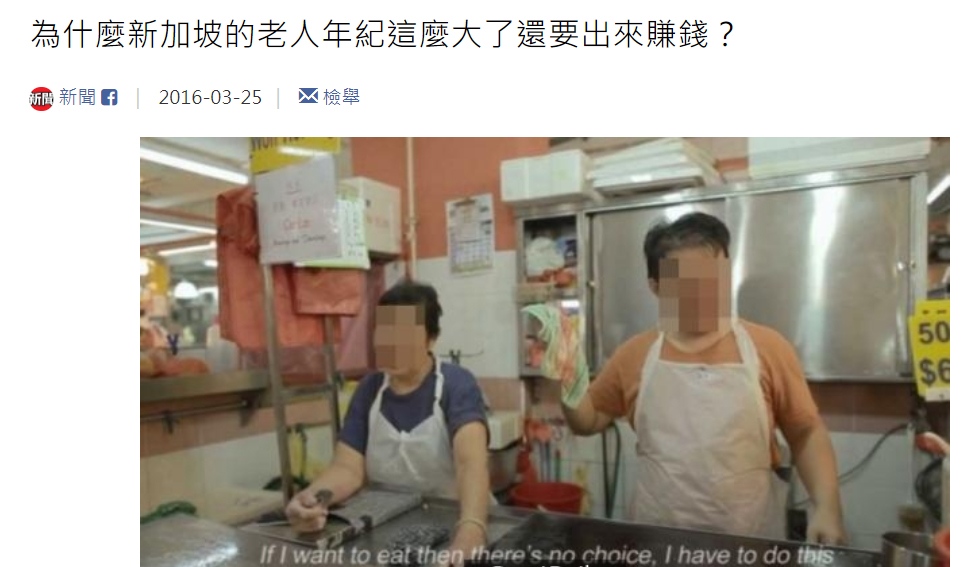 It is about the jarring reality of seeing old people working as odd job labourers in food centres here, cleaning tables and clearing trash, in a city-state that is supposedly luxuriating in unfathomable amounts of good fortune.

The piece that attempts to explain Singapore is not always accurate, but sweeping enough to be believable.

And this makes for a powerful narrative.

The article originated from a Taiwanese site in 2016.

In 2018, it is still being copied and pasted on other Chinese-language platforms.

It is not known who the original author is, but it can be deduced that it is a tourist or someone who has been to Singapore before and has some knowledge of the inner workings of this place.

But it is safe to assume, given the article's longevity and virality, it has been read by at least a few million Chinese-speaking people.

And given that the Chinese-speaking world is in excess of 1.2 billion people, the piece will continue to be circulated for years to come and continue to be read by a larger audience.

And for as long as the working old are still a common sight in Singapore.

As it is good to know what foreigners are talking about when they think of Singapore, here is an English translation of the piece:

Why are Singapore's old people who are so advanced in years still going out to earn money?

Did any of you notice that in some hawker centres or factories in Singapore, you'll tend to see some old folks with white hair busy working? When we first arrived in Singapore, we couldn't help but wonder, why are these frail-looking elderly people not resting at home, but instead, suffering by clearing tables and washing dishes?

According to the findings from Singapore's Ministry of Manpower, over 40% of the elderly who are aged 65 to 69 years old, as well as over 66% of them who are aged 55 to 64 years old, are still working. For those who are above the age of 70, there are around 40,400 of them who are still working. Most of them are working as cleaners, labourers, machinery operators, servers or salespeople, among many others.

Though it pains us thinking about such a phenomenon, let's analyse the situation logically. There are many reasons why the elderly work - the first is due to Singapore's economic necessity.

In order to allow Singaporeans to continue leading a comfortable life, Singapore needs to maintain its competitiveness, manufacturing capabilities, and appeal as a place for foreign investments.

The Singapore population are reproducing at the rate of 1.2.

But corporations can’t operate without workers. Without workers, how do you make enough money to keep the economy growing and maintain the current standard of living?

Perhaps the Singapore government did try to import more foreign labour, but too many foreign workers will incur the people’s ire.

The PAP took a big tumble during the 2011 General Elections (over this issue).

But besides increasing the pace of automation, the labour forces that Singapore can rely on are just the "elderly" and "women".

(Basically, none will be let off the hook. As long as you can move, walk, and are still living, you gotta work. In other words, it’s "live till you’re old, work till you’re old".)

In order to encourage the hiring of senior workers, the government can be said to have taken painstaking efforts. Other than raising the retirement age, they are giving employers who hire senior workers up to S$300,000 to let them improve the productivity of the workers and enhance the workplaces to make it more convenient for the elderly to work at.

The government has also organised many courses in a bid to change the mindsets of employers so they wouldn’t be biased against these senior workers.

For Singapore’s survival, such efforts explain why the old are still working.

Singapore’s culture is a mixture of the East and West, making use of the good parts and throwing away the bad parts. Singaporeans have always self-deprecatingly said that their country is like “rojak”, a dish that amazingly includes many different ingredients.

Singaporeans value filial piety, but their concept of it is not exactly the same as the traditional understanding.

Singaporeans think that children and parents are separate individuals. If the children are already earning money, and if they eat out with their parents, they’ll go dutch instead of paying for their parents.

(I really cannot understand this point.. Why go dutch when you’re eating out together?)

As for this "every man for himself" mentality, can I make the bold statement that it’s a result of the government’s policies?

To let the elderly feel that it’s expected of them to continue earning money and rely on themselves, rather than relying on their children to take care of them after they retire.

The reason is this: The government has started warning Singaporeans from a very long time ago, that if you don’t get married and have kids, the ageing society will worsen! (But it seems that everyone is busy, busy with their careers, busy earning money, resulting in them putting off having kids.)

The statistics are as follows: If Singaporeans don’t work hard to reproduce, then by 2030, Singapore’d only have two young Singaporeans to support one old person aged 65 and above!

And if Singapore’s elderly don’t work and simply enjoy life at home, then the pressure facing Singapore’d would be immense!

Due to various reasons, young people don’t have enough savings in their CPF account. They don’t have children either, which means that they have to work to feed themselves.

But not every old person dislikes working. Some elderly think that working is pretty good. Their children have their own families and careers, and cost of living is expensive. So by working, they can remain financially independent, continue to socialise with others and remain mentally active, making life for them more meaningful.

Some of the elderly say that if they don’t work, they wouldn’t know what to do, so if they stop working, they might very well fall sick.

In many countries with Chinese people, when the old retire, they help to look after their grandchildren.

But in Singapore, because they employ domestic helpers to take care of their children, the elderly don’t get to do that and so they don’t derive much joy from having grandchildren.

As a result, many old people feel lonely and that life has lost its meaning. Also, they don’t want to burden others, which explains why some end up committing suicide.

From these, you can see the difficulties of surviving for such a small country like Singapore.

Each person is like a gear that needs to turn continuously without stopping in order to ensure that Singapore, the large clockwork mechanism, continues to run smoothly.

If a gear stops turning, even the tallest skyscraper can collapse instantaneously.

As a resource-scare country, perhaps being hardworking and self-reliant are necessary for Singapore to survive!

Taken as a whole, the article is benign.

In terms of informational value, it is probably precious because it is a straightforward, easy-to-understand take on a curiosity of Singapore life.

The one issue that sticks out like a sore thumb is the claim that Singaporeans go dutch when eating out with their parents.

Other than that, it does provide a broad, sweeping take on Singapore's working old condition, which foreigners are wont to notice because it is indeed a common sight.

However, if taken defensively, this sort of article is part of an ongoing information war on Singapore.

Firstly, the potential audience for such writing -- sweeping and potentially misleading -- is easily in the millions, given that it is targeted at Chinese readers.

Secondly, this article was written in a language that the average Singaporean is unable to access due to a language barrier.

How then would Singaporeans refute an argument they cannot even understand or bother to?

And even if Singaporeans can, at what length can we put forth a rebuttal?

An information war is an ongoing affair, where there is a need to constantly seed information to overwhelm or thwart the opponent.

In the past, before the Internet and social media, Singapore was embodied by an industrial ruggedness. It has always been about what you see is what you get.

These days, things are a bit less straightforward, where we want to come off as more First World capitalist with a socialist heart, rather than just being in survivalist mode.

Making a good first impression is what counts.

Narratives that analyse Singapore written in languages that we cannot easily access or understand pose the problem of us being at the constant mercy of what others choose to portray us as.

But because Singapore is so small, any distinction made of this country by us and outsiders can amount to no real difference.

So, perhaps, this position is still tenable.