Look no further, ladies and gentlemen, because the Genius Singaporean of 2017 has been found.

For the past 11 years, he has been taking care of his wife, Loh Yock Yeng, 72, who has dementia.

And in the process, Tan has come up with an invention born out of love to make it easier for care-giver and care recipient to get around.

A few months after her diagnosis in 2006, Tan took his wife out on her wheelchair. He discovered she liked being outdoors.

So, he walked and pushed her along a park connector for about 5km.

Tan's wife was calm and happy. But Tan suffered tears to the skin on his soles of his feet as a result of the prolonged walking.

He kept up with the routine over time, nonetheless.

But as his age caught up with him, Tan had to come up with an easier method to continue ferrying his wife outdoors.

In September 2016, Tan bought an electric unicycle for S$600 to substitute his walking.

Using his technical know-how, he put together the unicycle-wheelchair contraption by himself. 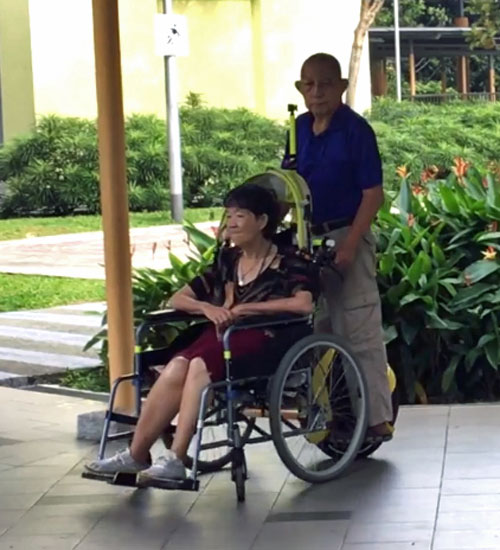 While comparatively more effortless than walking, the only drawback is that he had to stand while riding the unicycle and pushing the wheelchair.

As a finishing touch though, he even installed a shade for his wife and a polyvinyl chloride pipe to hold an umbrella over his head.

He also made a metal and wooden ramp to hold the unicycle upright when it was not in use.

But Tan was obviously not done.

In December 2017, he has developed an even fancier two-seater e-wheelchair prototype.

The improvised motorised wheelchair comprises parts of a bicycle, wheelchair and pram.

The entire ride is controlled using a joystick that Tan has access to so he can manoeuvre the vehicle.

A foldable bicycle seat is attached to his wife’s motorised wheelchair.

From having to stand on the unicycle to being able to sit comfortably with more control over the direction of the wheelchair, Tan's latest ingenious device is more than a step up:

The seat is foldable and comes with feet rest for the rider.

The elderly couple's romance began more than 50 years ago.

Tan was from Whampoa Secondary School and his wife was from Chung Hwa Girls' High School.

They would meet once a week for co-curricular activities as they were part of the St John Ambulance Brigade.

The four of them live in a four-room flat in Dover Crescent.

The early months of Loh's illness was very difficult.

Her dementia caused her to act like a two-year-old child. Tan said he couldn't understand what she was trying to say.

She would even stand next to her husband at 3am while he was asleep and give him a shock.

But that was because she had soiled herself as she cannot control her bowel movements and couldn't express herself.

She would even smear faeces on the walls with her hands.

If Tan did not take his wife out for walks, she got agitated and would shake the doors and throw things.

She even threw a porcelain cup out of the window and prompted someone to make a police report.

Tan feeds and bathes his wife everyday and changes the four layers of soiled towels on the bed and wheelchair.

He would also cut her her hair for her when it gets too long.

Here's a video of how he used to get around on his unicycle-wheelchair: