There are a shitload of quizzes online. Many of them are lame with random results. Others are pretty good. But none of them has made me question my existence in Singapore as much this one.

It does seem pretty well-researched indeed, with some cool and thought-provoking trivia in between each question.

But you probably don’t care so much about that. You just want to find out what city best matches your preferences, because you are curious. Just like me.

Here are some sample questions from the quiz. I challenge you to take the quiz honestly and see what city you end up with.

Thoughts you’d have at this question: I think I speak for most young Singaporeans when I say I don’t really wanna stay with my family or extended family. I mean, we love them but it's a little too intense to have Ah Gong under the same roof. Even staying with my parents is a bit much (my relationship with my parents actually improved after I moved out.)

On the other end of the spectrum, staying alone could get a little lonely, so that’s out. Choosing ‘My partner and our children’ means having kids, and I think bringing more kids into an overpopulated world is kinda insane. (We made a cool slideshow about it, check it out here).

So it’s down to ‘My Partner’ and ‘Friends in a flat share’.

I’m a pretty friendly person, so I’d go with the latter.

Thoughts you’d have at this question: Despite what most Singaporeans tell themselves, I think we’re a pretty spoilt bunch. We’d die without air conditioning. Get upset about not being able to drink water out of a tap. Seriously, we put WiFi down there with food and water on Maslow’s pyramid.

Many of us can’t even speak our Mother Tongue decently, so learning a completely new language in the developing world seems like too much work.

I’d like to be adventurous and move to somewhere less developed, but I’m going to be humji on this one.

I picked: In the developed world

Thoughts you’d have at this question: Would you be happy with a single room? Maybe. That’s how most of us spent most of life because we have to get married to get a house or wait till 35. It’s either that our using papa mama money to buy a condominium.

Stay in an apartment? The flats these days all seem kinda smallish. If we’re talking about the HDBs our parents own, then maybe. But otherwise no. ‘Penthouse overlooking the marina’ just seems a little too pretentious and show-offy. Like something a dishonest religious leader would own.

Finally, a large detached house with a garden seems like quite too much work to clean. That leaves ‘small house in a quiet street’.

I picked: Small house in a quiet street 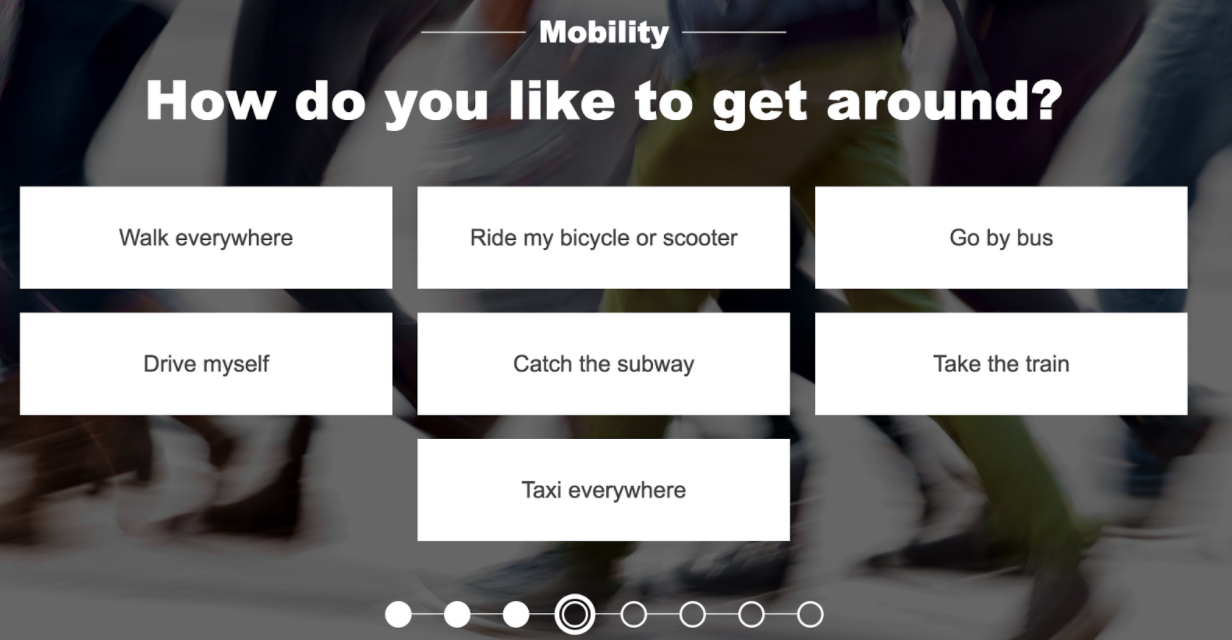 Thoughts you’d have at this question: I don’t know about you, but squeezing with hordes of people for years in Singapore has kinda traumatized me. I’ve always envied people with their own form of personal transportation, but cars are just so damn bad for the environment.

Taxis and car-sharing options are the next thing, but that kinda leaves you at the mercy of surge pricing. Not a good idea if you want to save money, retire early and do the things you love.

That leaves ‘walk everywhere’, which kinda sucks, and ‘ride my bicycle or scooter.’ I’ve tried cycling to work for a year now and can tell you it's very possible.

I picked: Ride my bicycle or scooter

Thoughts you’d have at this question: ‘In a shop’ sounds boring. ‘In a factory’ sounds dangerous. ‘At home’ sounds unproductive. ‘In an office’ is somewhat too close to reality.

‘I don’t work’ sounds great, but from my acute observation of 50-year-olds, boredom eventually gets to you. And you end up driving Grab or Uber, which isn’t exactly stress-free – Singaporeans can be real animals – ask anyone who’s ever been a GrabHitch driver.

I picked: I’ve already worked in a content farm. And I’d always dreamed of retiring somewhere with lots of animals. So ‘on a farm’ it is.

Thoughts you’d have at this question: This is quite a hard one to pick. All options are pretty enticing. That said, I have fond memories of growing up in a Singapore where finding an MRT seat during rush hour was still possible. Or when students didn’t have to compete against a shitload of people just for a spot in the university.

I picked: Not too crowded.

After magically calculating the results, the quiz decided I should probably reside in… Amsterdam…  which is not bad, I suppose. 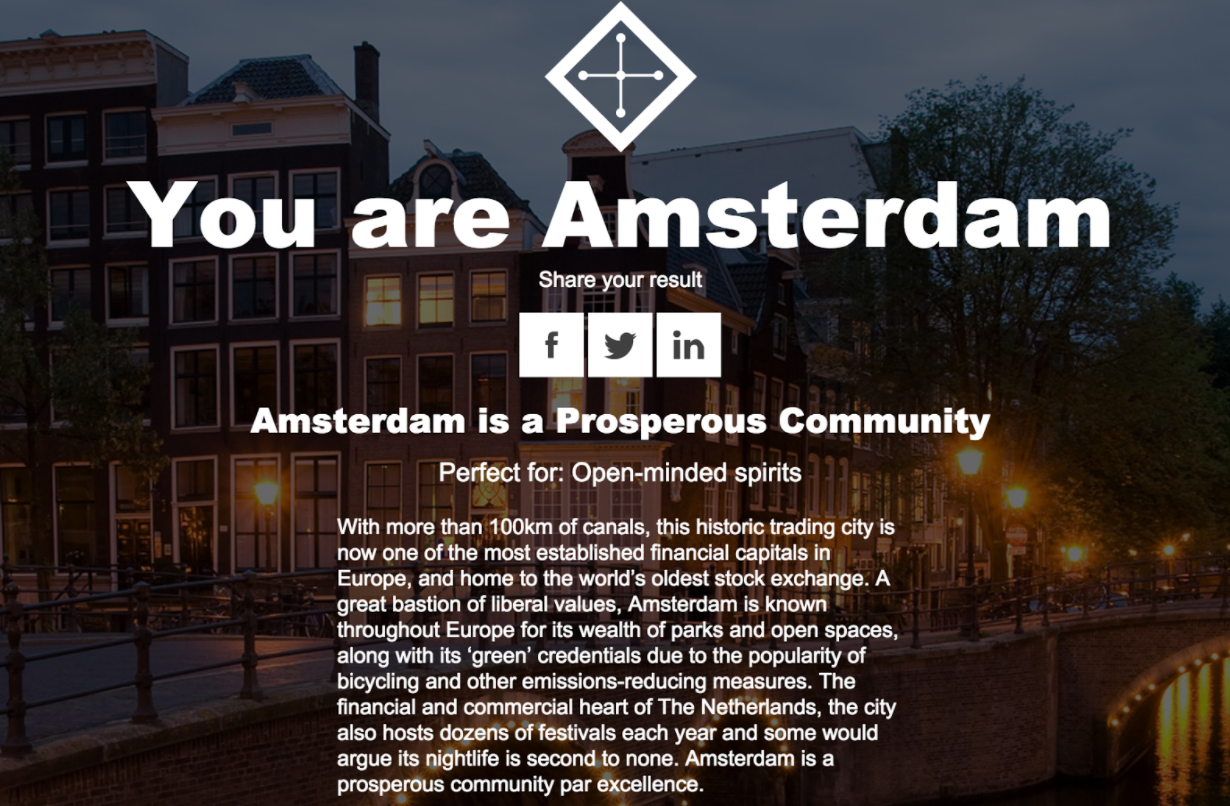 I then went back and retook the quiz, giving the most Singaporean answers I could fathom. That meant picking options like ‘great cuisine’, ‘high standard of living’, ‘taking the subway’. 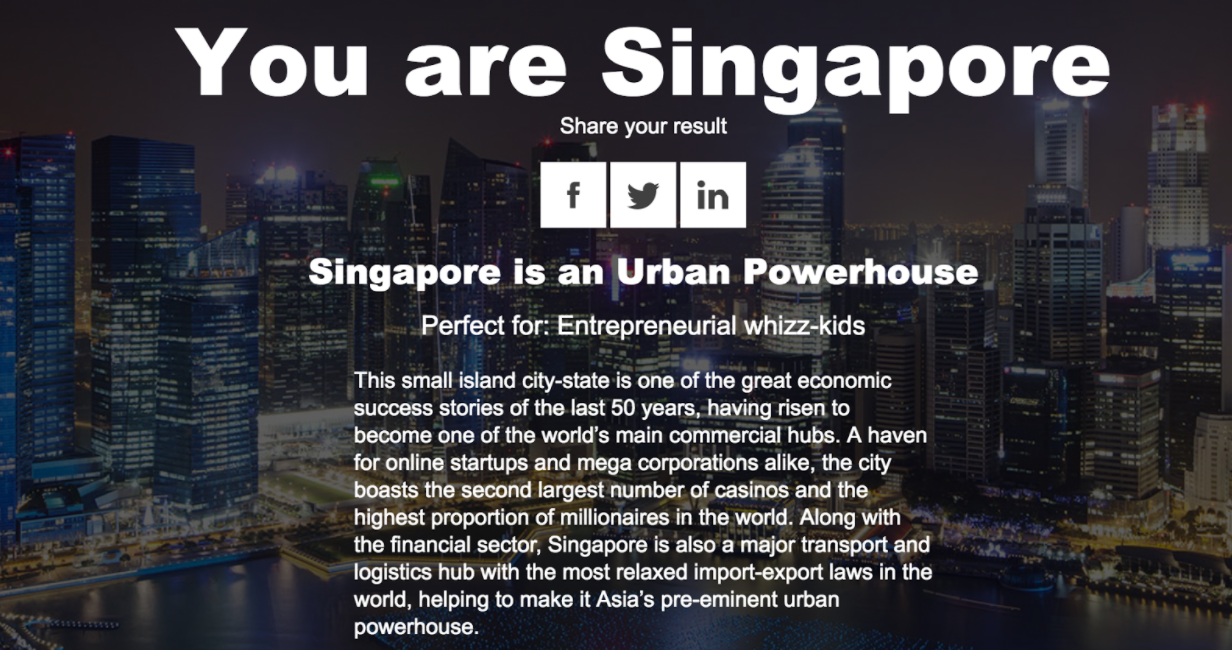 Turns out Singapore is perfect for ‘entrepreneurial whizz-kids’, which is, well, contentious. Ask yourself: how many of your peers have actually gone out on a limb to set up their own business?

Still, the results are telling. The expectation of the archetypical Singaporean (citizen or PR) is someone who’s constantly plugged in, somewhat profit-driven, business-minded and is constantly looking forward to new opportunities.

And that makes sense – because that’s exactly what Singapore needs to survive in this brave, new world. And there’s nothing wrong with that. Some might argue it’s the only thing Singapore can be. A tiny city of people working their asses off. Slack off a little, and we’ll probably end up irrelevant in a decade or two.

That said, I’m probably not alone when I say I’m pretty tired of the rat race.

But yeah, I know, you gotta play the hand you are dealt with right? Who knows? We might become a city that I'd love to live in in the future.

Around three out of every four of us will live in cities by 2050. As cities swell, pressure on vital resources like water and energy will become ever greater. This sponsored post was created in partnership with Shell, whose Future Cities project helps us all think more carefully about making the right choices for building sustainable cities.