In a somewhat predictable turn of events, Amos Yee has become the target of hate speech and a recipient of violent threats in the United States.

This was after the 18-year-old teenager from Singapore made a YouTube video arguing that paedophilia is acceptable.

In a Nov. 15 video titled, "Why Pedophilia Is Alright", Yee said his views on the highly unpopular matter were best articulated in that clip and he should be quoted based on the contents in that video regarding his views on the matter.

Yee made this assertion partly because he had previously spoken about paedophilia on various other social media platforms outside of YouTube.

However, this video consolidated those views and ended up testing the limits of free speech in America at a time when intolerance for politically incorrect speech is high.

Three videos on the subject so far

In total, Yee made three videos arguing that paedophilia is acceptable in principle. They were published on Nov. 15, 17 and 20.

It was in the Nov. 20 video, "Free Speech for the Pedophile", that Yee highlighted the opprobrium he faced in response to his initial video five days earlier.

His first video has been panned. It received more than 9,000 downvotes compared to less than 600 upvotes.

As of Nov. 25, it has received slightly fewer than 54,000 views, but spawned dozens of responses taking him down.

It is not atypical for YouTube comments to descend into name-calling and aggression, but Yee's first video on paedophilia extracted highly negative responses. 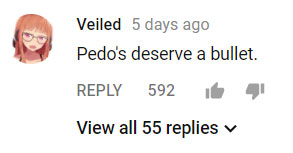 Motivations for arguing for paedophilia

According to Yee, who is currently residing in Chicago, he is not a paedophile and neither is he a purveyor nor consumer of material that qualifies him as one.

The motivation for him expressing his views on paedophilia is based on principle.

The most prosaic explanation that can be ascribed to his videos on paedophilia being acceptable is that he is simply arguing for the sake of argument and his views are unpopular but valid because he is only exercising his right to free speech.

Scores of other YouTubers have posted responses to his videos and have been less than charitable in their characterisation of him.

A laundry list of characterisations include Yee being an outright paedophile, a closet paedophile, a threat to polite society, a troll, an agitator, an attention-seeker and deluded.

Yee's views could not have come at a worst time.

The debate regarding free speech in the United States has escalated to fever pitch, which reveals a polarised society in turmoil.

There is a massive push back from the extreme Left against politically incorrect speech, since the election of President Donald Trump a year ago.

The irony is that the use of physical violence has been propagated and employed by those on the Left as a legitimate means to stop and shut down hate speech by those on the Right.

Yee's invitation to speak at Harvard College recently was rescinded and he acknowledged it was due to his views on paedophilia.

Yee is also currently serving out a 30-day ban on Facebook for harassment and has had his Twitter accounts suspended for good.

In December 2016, Yee fled to the US a day before he was due to report for a medical examination ahead of enlistment into National Service.

He eventually won his bid for asylum. He had cited persecution by the Singapore government for his political views as the reason for his application in the first place.

He was only recently released on Sept. 26 after a 10-month detention in the US.