Two Mothership staff covered the Asia Fighting Championship event for two days on Sept. 22 and 23. They are writing about their experiences to share how surreal the events surrounding the tragedy have been. This is one account from the front row seat. Here is the other.

We’re at AFC 2017 and the crowd is restless. A bunch of dudes have been duking it out in the ring, but there’s no denying it -- everyone is here to watch Steven Lim get his ass handed to him.

It’s all cheers for him as the Singapore idol wannabe struts out amidst mist and music. He’s completely decked in red -- like some sort of crimson rooster. Or Ronald Mcdonald from afar.

This is his shining moment. If he wins, he might actually be taken seriously. If he loses, people will admire him for his bravery.

Pradip receives predictably much less fanfare when he emerged from backstage clad in a gold robe.

His imposing physique is in stark contrast to Lim’s flabby mid-section. The hulking, tattooed giant of a man enters the stage slowly, unfazed whilst Lim indulges in his usual theatrics.

He’s not exactly chiseled, but he looks strong. Strong like he has girth.

With most of our attention focused on Lim, I can’t remember what Pradip was doing as Lim took his time to work the crowd.

I’m really worried for Lim as both men leave their corners to meet in the ring. Lim skips like a petulant child as he makes his way there.

Pradip kicks in Lim’s direction, but it doesn’t connect.

Apparently, the match hasn’t started. The referee gestures for the match to start, but Lim’s points to his hair, delaying the start for a few moments. Pradip looks bored waiting for the fight to start.

My worry gives way to amusement.

There’s too much theatrics in this. Surely, it’s gonna be a staged fight. You only see stuff like this on WWE. No serious fighter would have last minute concerns about their crowning glory. 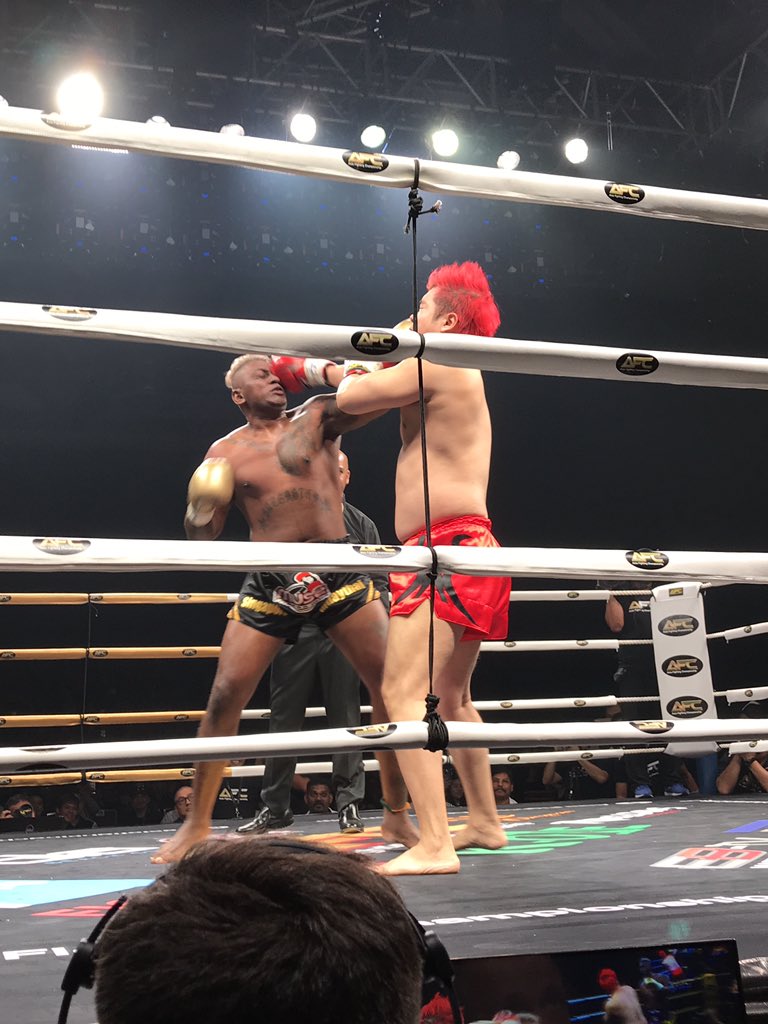 The match finally starts and by now I’m 75 percent certain it’s staged. Pradip strikes first with a kick, but Lim soaks it up easy. The Singapore Idol reject charges his opponent, but is kept at bay by Pradeep’s knees.

Lim’s a red blur of spinning, flailing arms and legs. Sometimes, he turns his back towards Pradip. Sometimes he rushes head-on into his opponent. Techniques often witnessed in playground scuffles -- unseen in kickboxing circles.

Compared to the fighters I’ve watched tonight, he looks like a drunk kopitiam uncle on a rampage. The people love it.

Pradip is far more measured. His movements are a little more reminiscent of the fighting we’ve seen tonight, but he seems confused by Lim’s unorthodox style, but I’m pretty sure he’ll win. He has to win.

The duo make their way around the ring. Both men get struck multiple times in the head, but nothing too decisive. Slightly over a minute has passed, and Lim’s actions are getting erratic. He’s still seemingly impervious to pain, but his face says otherwise. His lungs must be burning.

Pradip might be in control, but his movements are also slowing. The attacks are less frequent and the crowd’s initial exhilaration starts to fade. Lim is just trying to get away from Pradip now.

It’s a joke. There’s no reason to think otherwise.

The referee calls the end of the first round. Pradip gets a punch in, with no consequences. Both men walk back towards their corners, unaware of what is to follow and hog headlines for the next few days to come.

Lim sits in his corner and gets a belly rub?

I take a look at his flushed face. Of all the times I’ve seen Lim, this has got to be the most unflattering.

For a guy who’s known for making unflattering videos of himself, that’s saying a lot.

I’m imagining how the match might end. Who’s going to win?

They’d probably let Steven win to show that everyone can be magically good at kickboxing after a few months of training.

He’s the star of this event. No doubt about it, however messed up that is.

But then again, how much would anyone have to pay the other guy to lose publicly to Steven Lim? Maybe the result isn’t written in stone. The suspense is killing me.

The referee starts the second round. Lim walks towards Pradip and surprisingly straight up delivers a head shot. He lands two more as Pradip mounts an attack. Lim flails wildly, while Pradip closes the distance. The larger man tries to do some damage but he fails, succeeding in only pushing Lim to the ropes.

Lim counterattacks. Titan against titan, the announcer declares. He lands a few more head shots. Lim looks like he’s going exclusively for the head. The match is looking a lot more even now. Pradip’s punches are looking weaker, but his relentless charging sees Lim trip over himself and fall to the ground.

The referee intervenes while Lim rises. He walks towards his opponent, then comically bends down, exposing himself to attack. Is he going to surrender? How anti-climactic.

Pradip tries to take advantage of the situation, but the referee interrupts in defence of Lim, pushing the bodybuilder to the ropes.

But something’s not right.

Pradip leans unsteadily on the ropes. The big man looks dazed as he bounces up, one arm hanging over the top rope. Lim catches his breath. He moves quickly over to Pradip, who leans back, attempting a kick. Lim doesn’t give him the chance. He lands a hammer fist into Pradip’s face. It’s a solid hit. I watch sweat droplets scatter and the bodybuilder’s head jerks back violently.

What? It’s not staged?

The crowd cheers -- the underdog might actually pull off a win. Suddenly, I’m rooting for Lim as well.

Pradip shakes off the hit and goes after Lim, who misses another punch. Pradip’s defences are down and there’s a cut on his nose bridge where Lim’s punch landed.

Suddenly, it’s looking really shaky for him. And then it happens. 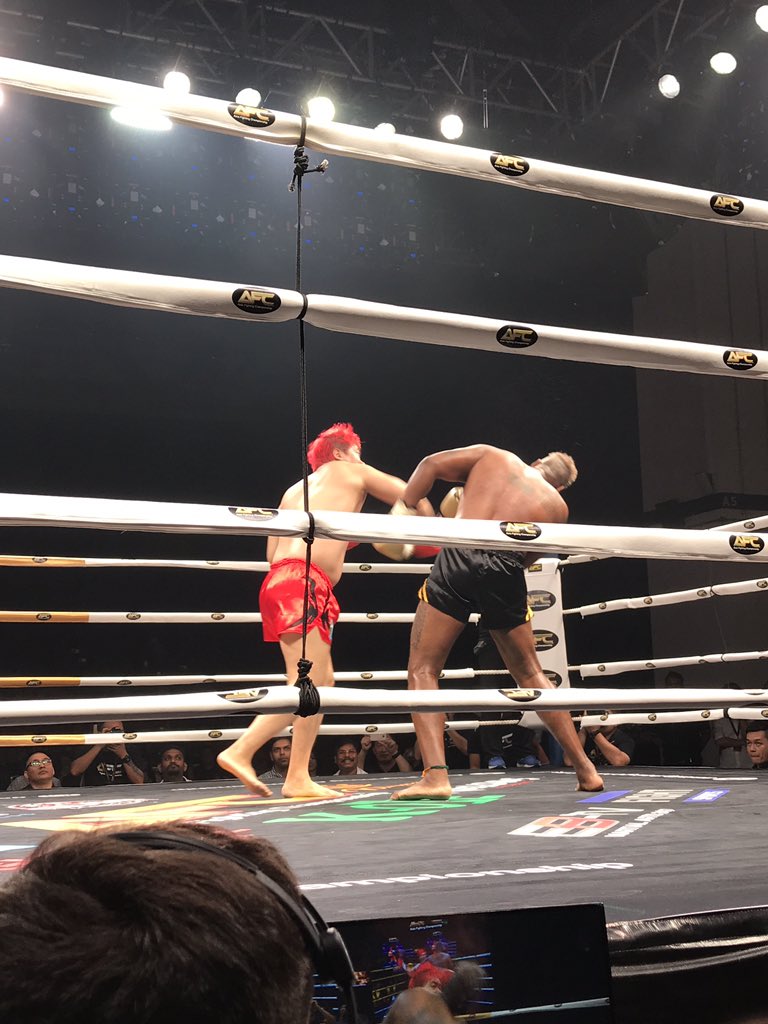 The crowd favourite walks straight into another massive hammer fist, direct to his face. There’s an audible thud. Pradip lumbers towards Lim. He looks like he’s about to grapple, but Lim musters the strength to shove Pradip into the ropes.

The big man falls. The entire hall explodes into cheers. Pradip struggles to get back up on his feet. He spends a moment in high kneel position before rising up. From where I am, he looks okay. The referee checks on Pradip, while Lim walks from corner to corner.

While on the ropes, Steven raises both hands in jubilation. There’s some confusion, but it looks like the Idol reject has won. He climbs a corner and raises a hand in jubilation. Lim looks like he’s just completed a marathon. Pradip stands in a corner while the announcer jokes about Lim looking like a "fearsome individual".

The outcome is finally being announced. Both men are in the centre of the ring. Pradip is barely standing. Eyes closed. Shoulders rounded. Head hunched. They announce that Lim has won by technical knockout (TKO).

Pradip manages a hug and a smile as Steven celebrates. It’s fake, I think to myself.

The bodybuilder quietly leaves the spotlight and four very (physically) attractive ladies take his place. Lim is being interviewed. Some kind of championship belt makes it to ring and the cameras flash like it’s fireworks on August 9.

It feels like professional wrestling all over again. It has to be staged -- Lim’s triumphant screams, Pradip slumped in his corner, not saying a single word.

He doesn’t react as they hang the consolation prize for the celebrity showdown over his neck. A small team assembles around him to help him out of the ring. Lim is hugging his belt on stage, basking in glory. 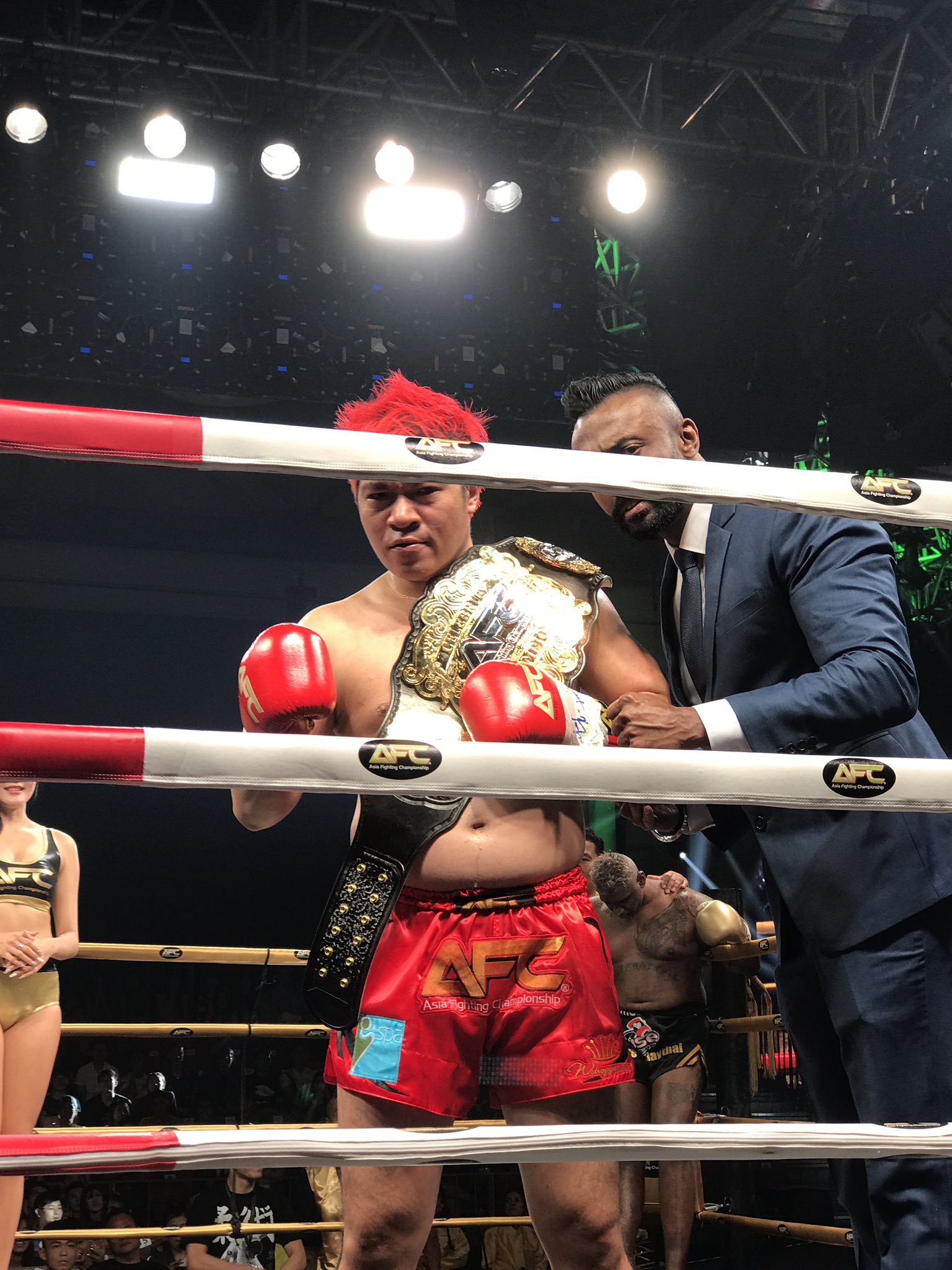 Pradip slumps to his feet. The announcer begins to speak, but is interrupted by the referee gives the international hand sign to wrap things up. The girls make their exit. We are asked to rise for the national anthem.

Lim steps out of the ring. Cameramen scramble to get pictures of his victory walk. Pradip’s being attended to by a team of five. They’re slapping his chest. They’re rubbing his face. His neck goes limp.

It’s pretty good acting, I think to myself.