Mention World War II to Singaporeans and thoughts of the Japanese Occupation and its associated atrocities, suffering, and death come to mind. It was a difficult time.

Singapore fell to the Japanese on Feb. 15, 1942. This year marks the 75th anniversary of the beginning of the Occupation.

It was a dark period that saw the local population suffer from severe food shortages and the general brutality of the occupying forces, which included the massacres carried out in the Sook Ching operation.

Things changed, however, when the United States dropped two atomic bombs on the Japanese cities of Hiroshima on Aug. 6 and Nagasaki on Aug. 9, 1945.

On Aug. 15, 1945, Japanese Emperor Hirohito announced over the radio that Japan has accepted its fate of surrendering unconditionally to the Allied forces, marking the beginning of the end of the war and Occupation.

Following that, leaflets written in English, Chinese, Japanese, Jawi, and Tamil were dropped by Allied planes over places like Singapore to inform everyone that Japan had surrendered.

A leaflet announcing the Allied victory over Japan written in Tamil from the National Museum's collection. Source: National Museum of Singapore Facebook. [/caption] Following a few weeks of chaos that saw some locals who had collaborated with the Japanese lynched by groups of people, the formal ceremony for the Japanese surrender to the British was held on Sept. 12, 1945.

In a ceremony held at City Hall (present day National Gallery Singapore), Japanese General Seishiro Itagaki led a delegation of Japanese representatives and signed the formal Instrument of Surrender in the presence of the British led by Lord Louis Mountbatten, the Supreme Commander of South-East Asia Command. Japanese delegation heading up the steps to the entrance of City Hall. Source: NAS[/caption] General Itagaki signing the Instrument of Surrender in the presence of Lord Mountbatten. Source: NAS[/caption] 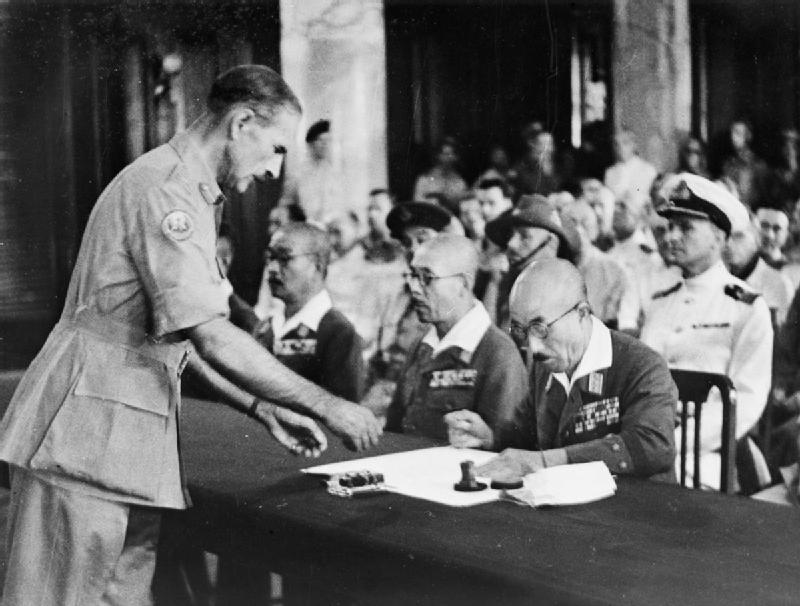 The ceremony brought the war and Occupation to an official end for Singapore on this day 72 years ago.