The full-time influencer got married on Aug. 12 at Ritz-Carlton Millenia Singapore to James Chen, who also makes a living the same way as his new spouse.

Their wedding, as one would expect, is heavily sponsored.

Some of these items include the venue, outfits and jewellery, among many other things.

Koh's nine bridesmaids, for example, had a total of 27 dresses tailored for them by designer dress brand Juillet. They are worth around S$5,000.

But wedding sponsorship is not a new practice, as pioneer blogger Xiaxue and food blogger LadyIronChef had accepted substantial sponsorship for their weddings.

However, in a report by The Straits Times, some guests who attended the wedding said that were unhappy with Koh's sponsored wedding, as they felt it was "insincere".

"I felt cheated," shared an attendee known only as Min, one of Koh's university friends. "The sponsorships cheapened the wedding, made it insincere, and I felt as though she had made money off me through her wedding."

Another university friend at the wedding thought Koh had "created an ethical problem" by not informing the guests about the sponsorships beforehand.

"I would have given her an ang pow in any case, but changed the amount I put in it," he said.

Ethical problems aside, such blatant sponsorship and publicity will attract the attention of the Inland Revenue Authority of Singapore.

In November 2016, Iras came up with rules mandating what sort of "non-monetary benefits in kind" have to be declared as part of taxable income.

Essentially, products or services worth more than S$100 received from companies given to influencers must be declared.

Those who flout the rules will have to pay a penalty amounting to double the tax undercharged.

In March last year, Iras even wrote to bloggers to remind them that such benefits must be declared as part of their income. They were to do so by the following filing month.

Iras also emphasised that these requirements are not new and are similar to those for other self-employed taxpayers.

What were some of the sponsorship?

For example, given out at the wedding were Sandome Cura’s artisan soaps priced at S$29.90 a piece.

The combined cost of just four soaps would render this one product taxable and requiring it to be declared, abiding by the Iras guideline.

Moreover, social media postings can be used as a form of tallying.

One probable way for the taxman to track influencers is to screen the social media platforms for individuals who may receive such potential taxable goods and income.

Moreover, for this wedding, there were already various social media mentions of the companies that sponsored the couple prior to the big day.

The hotel also replied in the comments: "Thank you @melissackoh for sharing your beautiful #RCMemories! We can not wait to celebrate your special day with you!"

So excited to reveal the place where we’ll be commemorating the biggest celebration of our lives. Head over to my blog or click the link in my bio for my latest video upload on YouTube to view how our site recce of our chosen hotel venue went. #MelissaCKohxRitzCarlton #RCMemories #RitzCarltonSingapore #melsweddingjourney 📷: Natalie, @lovebyjuly

More obvious indications of collaboration with the hotel can be found on another Instagram post dated Aug. 7, where Koh thanked Ritz-Carlton for pampering her and her bridesmaids at a spa session.

Thank you for throwing this spa-rty for me and my girls, @ritzcarlton! ❤ Over the weekend, my bridesmaids and I enjoyed a top to toe pampering at the new Ritz-Carlton Spa, followed by a 3-course set lunch by the pool where we were showered with one surprise after another. So touched beyond words. #MelissaCKohxRitzCarlton #RCMemories #RCPartner #RitzCarltonSpaSingapore #lesalonrose #bridalparty #mrsbabsandco

Giving you guys a peek into my wedding cake tasting session at @winifredkristecake on my blog tonight (link in bio) ❤️ I am still swooning over the very intricate cake designs and delectable flavours! Can't wait to see the actual design on my big day! #melsweddingjourney #winifredkristecake

Chen, who left his job in finance analysis to be a full-time influencer with Koh, also created a post to thank Common Suits for his suit fitting:

Throwback to when I visited @javinthey, a few weeks back, in his seriously stylish man cave for a crash course in suit fitting and to find out that my right butt cheek is much larger than my left. 🍑 Definitely see the value in getting a tailored suit that accommodates my body type. Absolutely can't wait to see the finished product next week! *Suiting fitting at @commonsuits *

Under the "Wedding" tab on Koh's blog, there are also a number of posts dated before Aug. 12, detailing the planning process with various vendors: 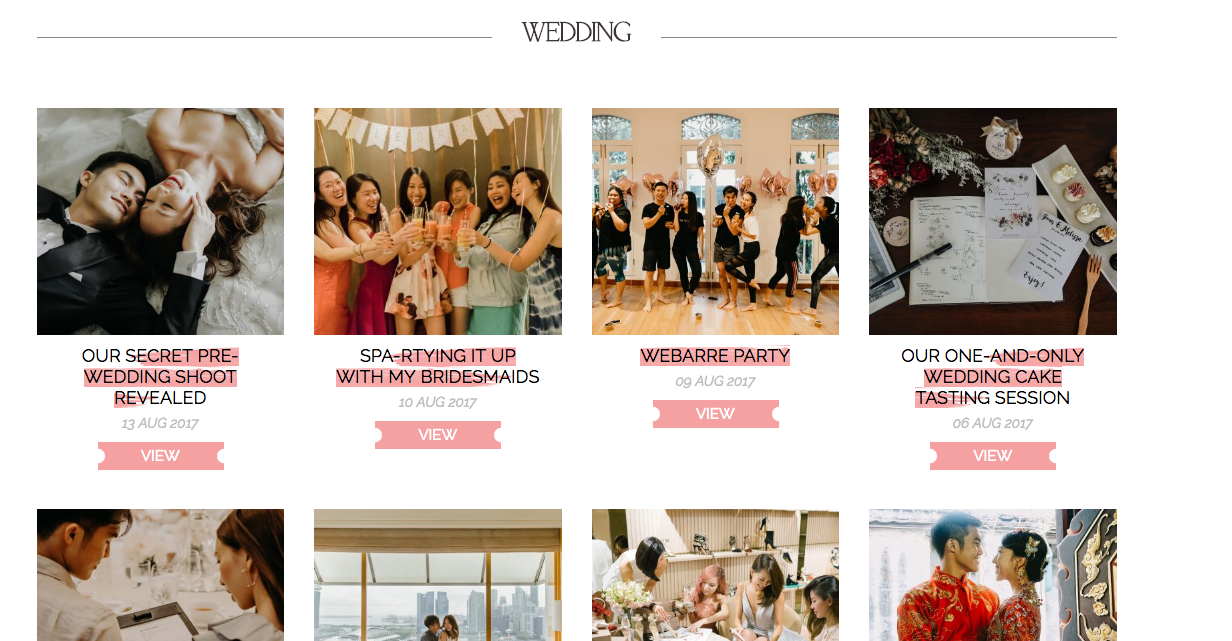 Although sponsorship were not stated outright, it is common knowledge that the brands tagged in an influencer's social media posts are usually working in collaboration. This is especially so if the influencer has a sizeable following, as Koh does.

After the wedding, Koh continued to post about various other sponsors, such as a collaboration with crystal brand Swarovski and bridal boutique Vaughn Tan for her gown:

Collaborated exclusively with @swarovski in creating a dazzling gown designed by @tanvaughn embellished with over 20,000 #swarovski crystals. I specially selected crystals of different sizes to create a 3D effect made beautiful with crystal trimmings and paired with #atelierswarovski's latest bridal collection ✨ #melsweddingjourney #mrandmrsbabschen

A closer look at the details of my gown, made with love by @swarovski x @tanvaughn. Also wearing a gorgeous head piece from their bridal collection ✨ #atelierswarovski #swarovski #melsweddingjourney #mrandmrsbabschen

These are the best girlfriends/bridesmaids I could ask for. Thank you so much for journeying with me and making this wedding such a memorable experience. Thank you for giving your all and doing this out of love for me. I don't know what I'd do without each one of you ❤️ You all looked so stunning in the gowns designed by @juilletofficial! My heart was singing with joy when I first saw you girls at the foyer even though I was running about saying hi to everyone. My all time favourite #mrsbabsandco crew 😍 #mrandmrsbabschen #SoiréebyJuillet

I told my friends at @juilletofficial to put a bow on my girls, and that's what I got! The cutest little mini red dresses, with a huge bow at the back. I love 😍❤️ #mrsbabsandco #mrandmrsbabschen #juillet

More items, such as her shoes and a photo album, were also given shout outs:

Captured my adventures with @jamesbabschen and had them beautifully printed into an album for our own memory sake. My friends know that I always prefer things in hard copy. Thank you, @gloryworkz! 📷: @multifolds #gloryworkz #melsweddingjourney #mrandmrsbabschen #bridalmusings #sp

Only smiles on that beautiful morning, cos when God made you, I know he must have been thinking about me 👰🏻🤵🏻 . . Courtesy of @thebridestory Wedding Planning: @blisspact Stylist: @medkarlek.inc Photographer: @multifolds Videographer: @substancefilms Florist: @ccleedesigns Make Up Artist: @themakeuproom_sg Church Wedding Gown: @amandaleeweddings Jewelry and Watches: @tiffanyandco #TiffanyAndCo #MrandMrsBabsChen

Did not profit from wedding

While the sponsorship may amount to a hefty sum, Koh and Chen claimed they did not profit from the wedding, although they declined to reveal the amount spent.

There was also a morning church ceremony, as well as a lunch celebration for the wedding.

Most of the sponsors approached them on their own accord, they said, although they were also seeking sponsors.