The Speak Mandarin Campaign got off to a rocky start on July 10, 2017, as it attracted criticism and widespread mockery on social media.

This was after the official campaign banner at the launch event featured a misprinted Chinese character.

Pictured in the photo together with the mistake were the guests-of-honour, Minister for Culture, Community and Youth Grace Fu, CEO of National Heritage Board Chang Hwee Nee, President of Singapore Chinese Chamber of Commerce & Industry Roland Ng San Tiong, and Chairman of Promote Mandarin Council Seow Choke Meng.

At first glance, the Chinese characters on the banner looked like "听说读写" (tīng shuō dú xiě), which referred to "listen, speak, read and write", the four key skills of language learning. 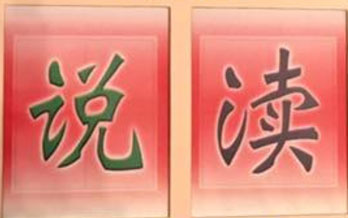 Just contrast the left component (言字旁, yán zì páng) of the second character and the third Chinese character, which were supposed to match if they were correctly printed.

So, what does the Chinese "渎" character mean?

"渎" (dú) has the meaning of showing disrespect and contempt, and even to the point of desecrating and profaning.

You're probably thinking it's just a matter of the font used.

After all, many Chinese fonts are calligraphic, and strokes can be so cursive to the point that when put together, they look dissimilar from what was printed in our primary school Chinese textbooks, or even written by your own Chinese teacher's handwriting.

But it clearly wasn't just a matter of the font.

One of the first to identify the font used on the banner before declaring it was outright wrong was Teo Sum Lim, who posted his findings on his personal Facebook page.

On his post, he contrasted the two characters using the same font, and the result was clear as day:

From what we see, this actually seems like a type of "渎职" (dú zhí), meaning "malfeasance and negligence". Sad.

The photo reflecting the mistake has been circulating around instant messaging applications and social media platforms since July 10, as the uproar in the Chinese community intensified.

The mistake has been construed to reflect a broader decline in Chinese standards in Singapore.

Government statistics have reflected the gradual decline of the use of Mandarin in our local community.

According to the 2015 General Household Survey, English is now the most frequently spoken language at home for more than half of Chinese residents who are below 25 years old.

For Chinese residents who are between the ages 25 and 54, about 50.6 to 56.2 percent speak Mandarin most frequently at home.

The Speak Mandarin Campaign has acknowledged the error and apologised for the mistake on its official Facebook page:

The lesson learnt here: Not only do we need the Speak Mandarin Campaign more than ever before, we may have to consider a Write Chinese Campaign one day.

Top image via Teo Sum Lim via the web