Refrigerators are an indispensable part of our modern daily lives, and it is hard to imagine what life is like without them. They are particularly important to us here in Singapore for keeping our drinks cold, food fresh, and ice-cream frozen.

Early refrigeration technology dates all way the back to the 1750s, but the technology was cumbersome and hardly practical in those days. The technology progressed slowly over the years, and while the first commercial ice-making machine was invented in 1854, it was only 59 years later in 1913 that the first home refrigerator was invented.

So, how did Singapore, with hot temperatures all year round, deal with its refrigeration needs in the past?

Well, in the 19th century, ice was a commodity and there was actually a global trade in it, thanks to an American businessman named Frederic Tudor.  Tudor started the ice trade in 1806, 13 years before modern Singapore was founded by Stamford Raffles. He harvested ice by cutting them up from frozen lakes in America, then sold and exported them. 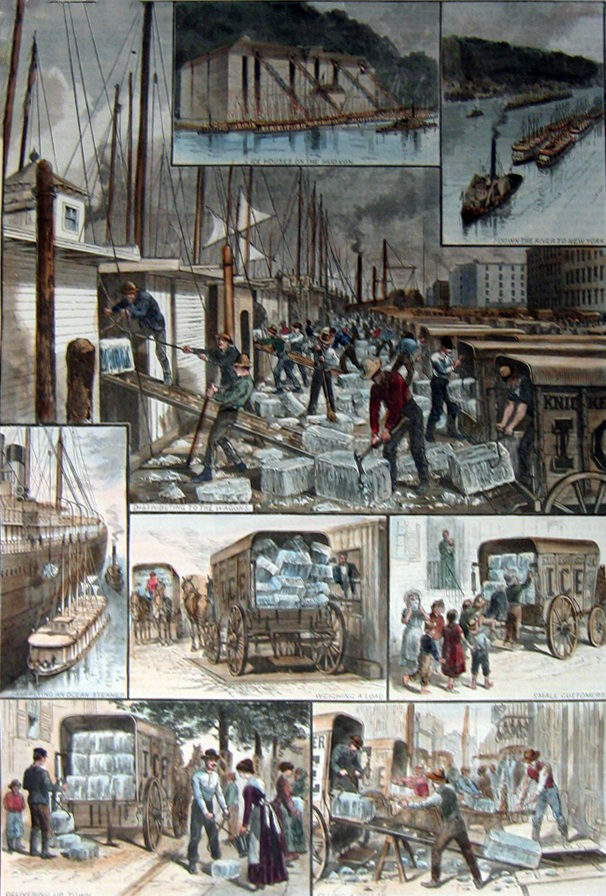 Crew loading ice onto a British ship bound for India in 1875. Source: Wikipedia[/caption]

Ice as a commodity was bought and used by people for various reasons, ranging from chilling drinks to showing it off as a status symbol for the rich.

In early Singapore, one man was linked to the ice trade. He was Whampoa Hoo Ah Kay.

A prominent Chinese businessman and early pioneer of Singapore, Whampoa (whose named was derived from his land of origin, Huangpo in Guangdong, China) dabbled in the ice trade in 1854 by importing it to colonial Singapore under his company, Whampoa & Co. Ice was shipped in to Singapore from America and stored at Whampoa's Ice House at Clarke Quay.

The ice house was a landmark of sorts in those days, with its Victorian wrought-iron balustrades. Since air-conditioning had not been invented yet in the mid-1800s, you might be wondering how ice could possibly be transported from a place of winter to the heat of Singapore, and stored in Whampoa's Ice House without melting.

The answer is surprisingly simple - sawdust. Large blocks of ice were covered with sawdust, which insulated the blocks from the surrounding heat, and slowed down the melting process.

In Whampoa's Ice House, the ice blocks would've have been stored with generous amounts of sawdust covering them.

Unfortunately (and perhaps not surprisingly) for Whampoa, his ice business didn't fare very well. He only managed to sell 400 to 500 pounds of ice a day, which was way short of the 1000 pounds required to break even.

This led his short-lived ice business to fold in 1856, two years after it began. 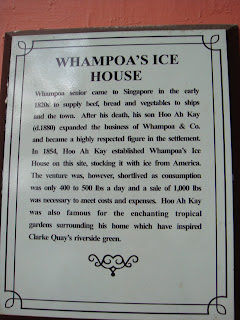