A woman in Singapore was allegedly given an extra free serving of protein in her Subway wrap, which was bought from the Tampines 1 branch.

The customer, who is obviously dissatisfied, discovered that a live cockroach had supposedly emerged from her wrap when she heated it up in the oven toaster. She has since lodged a complaint with Subway Tampines 1.

According to the customer, Cheryl Marie Tay, she bought the wrap on June 15 at about 4pm.

She went home and left the wrap in the mircowave for safekeeping before going to the gym.

When Tay returned from the gym at around 7pm, she heated up the wrap in her oven toaster. She claims she had cleaned up the appliance before using it.

She then found the cockroach near the wrap when it was done toasting.

The cockroach had apparently scurried out of the wrap and died on the foil.

In case you can't see it, here's a screenshot: 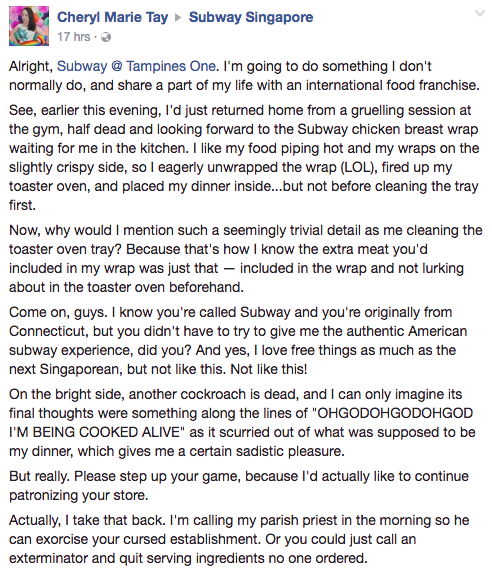 Tay has also posted the complaint to Subway's page, where the F&B company promised to investigate the incident: 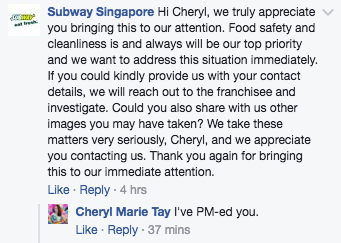 As there is a possibility the cockroach might not have come from the Subway wrap itself, we decided to journalism this and contacted Tay for clarification

Here's the full conversation because accountability and transparency and there's actually a Freudian slip:

To summarise: Tay had left the wrap in a clean microwave while she was out at the gym, and the wrap was still secure when she got home.

This minimises the possibility of the cockroach breaking and entering the wrap while Tay was away.

Imagine if she didn't heat the wrap up.