Recently, the U.S. Central Intelligence Agency (CIA) made its repository of declassified documents available to the masses online. The documents can be browsed via the CIA Records Search Tool (CREST).

Our searches on Singapore through CREST yielded Singapore's most well-known brush with the CIA.

In 1960, a CIA agent was caught trying to buy information from a Singapore intelligence officer. The CIA offered to pay then Prime Minister Lee Kuan Yew USD$3.3 million to cover up the matter.

Lee rejected the offer, and asked the U.S. to provide formal economic aid to Singapore instead.

Dean Rusk, the then U.S. Secretary of State, also formally acknowledged the incident and apologised to Lee in a letter. 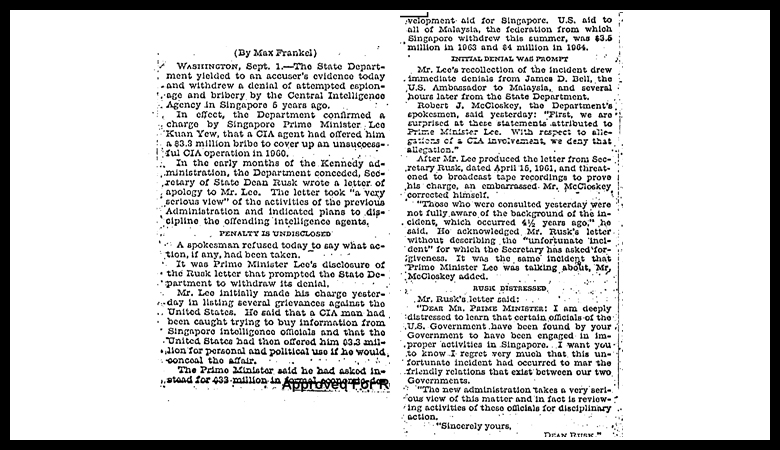 In 1965, Lee revealed the incident in a televised interview with foreign correspondents.

This led the U.S. ambassador to Malaysia and the State Department to both deny the incident, which prompted a furious Lee to furnish Rusk's formal letter of apology as proof of the incident.

Lee also warned that he would disclose further details of the incident, "which may sound like James Bond and Goldfinger, only not as good but putrid and grotesque enough".

"The Americans should know the character of the men they are dealing with in Singapore and not get themselves further dragged into calumny.....They are not dealing with Ngo Dinh Diem or Syngman Rhee. You do not buy and sell this Government."

You can read the congressional report which details the incident here. The rest of the Singapore archive and other interesting topics are available for viewing here.

Top photo from CIA.gov and NYT.