Tuition has become a staple for school-going children in Singapore.

While it is understandable that each child -- and by extension, family -- may seek specific tutors for specific needs, one tutor has come forward to share her experience of being repeatedly rejected for tuition jobs -- despite being more than qualified for it.

The tutor is an undergraduate student from a local university and is seeking part-time work at a local tuition agency for extra income.

The agency essentially acts as a middleman by matching families with the tutors for the required subjects.

Compiling all the requests of the different families, the tuition agency then sends them out to the tutors under them. Interested parties can apply to take up the vacant slots. 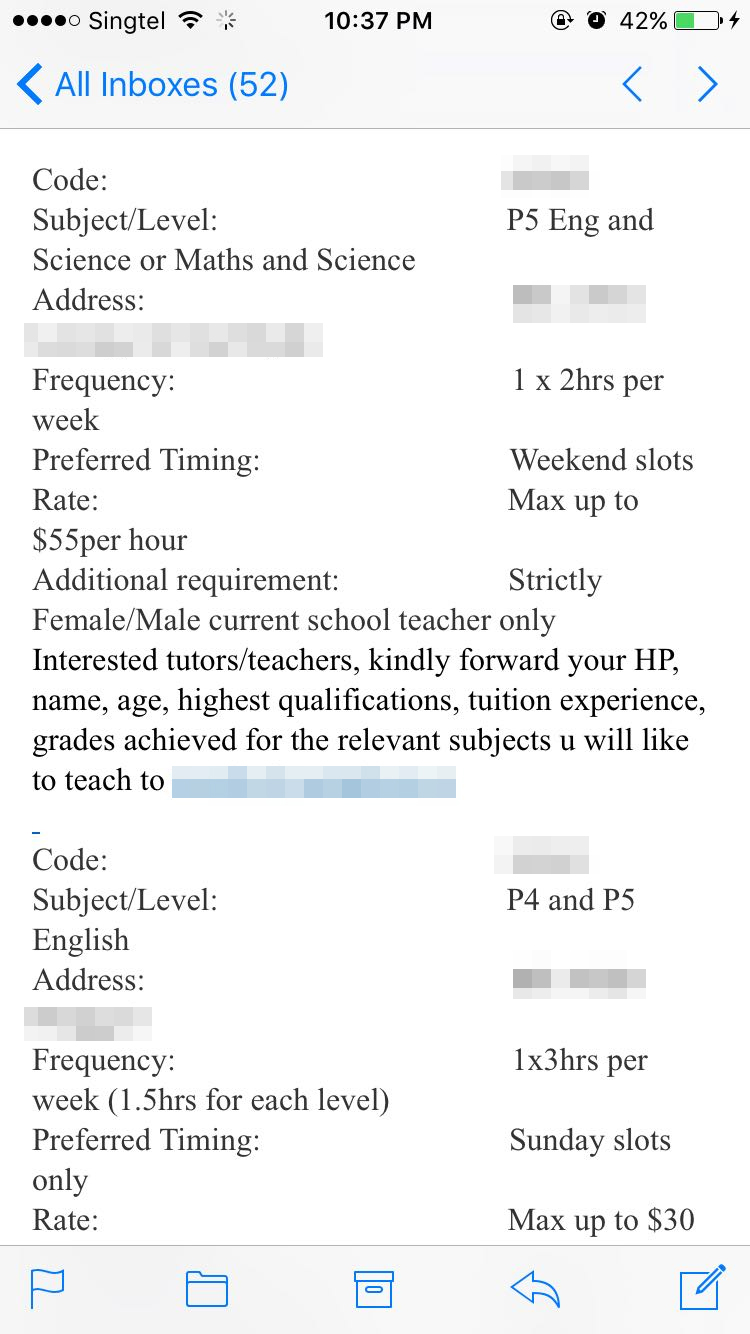 As the tutor in question specialises in English and Literature, she has repeatedly applied for positions that required tutors for those two subjects.

However, time and time again, she has met with responses from families like the one below: Recently, it was more blatantly put across to her: Speaking to Mothership.sg, the tutor said she feels frustrated that she has to deal with this kind of issue time and time again.

This is despite the fact that she is a first-class honours student.

She also related that she has even met with a situation where after she was rejected by the family, the same tuition gig was offered to someone she knew, who is Eurasian Chinese.

She also said any language or communication barrier with non-English-speaking families should not be a problem, particularly in her case, as she is from a mixed Malay-Chinese family.

Acknowledging the sensitivity of the issue, she doesn't demand recourse.

Instead, she said she understands that some people just don't feel comfortable with certain races.

What have the authorities said about such practices

According to TAFEP’s job advertisement guidelines stated in its fair employment practices handbook,

Race should not be a criterion for the selection of job candidates as multiracialism is a fundamental principle in Singapore. Selection based on race is unacceptable and job advertisements should not feature statements like ‘Chinese preferred’ or ‘Malay preferred’.

Religion is unacceptable as a criterion for recruitment except in cases where employees have to perform religious functions as part of the job requirement. In such cases, the requirements should be clearly and objectively presented”.

But such practices are normalised

However, a quick check on forums has shown how prevalent racial preference in tuition has become in Singapore. Ultimately, the student tutor said she hopes people, especially parents, can have a more open mindset towards tutors like her.

She said: "I just wish that it wasn’t this way because it hasn’t changed since my mum’s time."